Accessibility links
Capturing Summer's Harvest, One DIY Wine Bottle At A Time : The Salt You don't have to own a vineyard to enjoy homemade wine. For fun or family tradition, home winemakers take pride in making a bottle that can't be found on grocery store shelves. 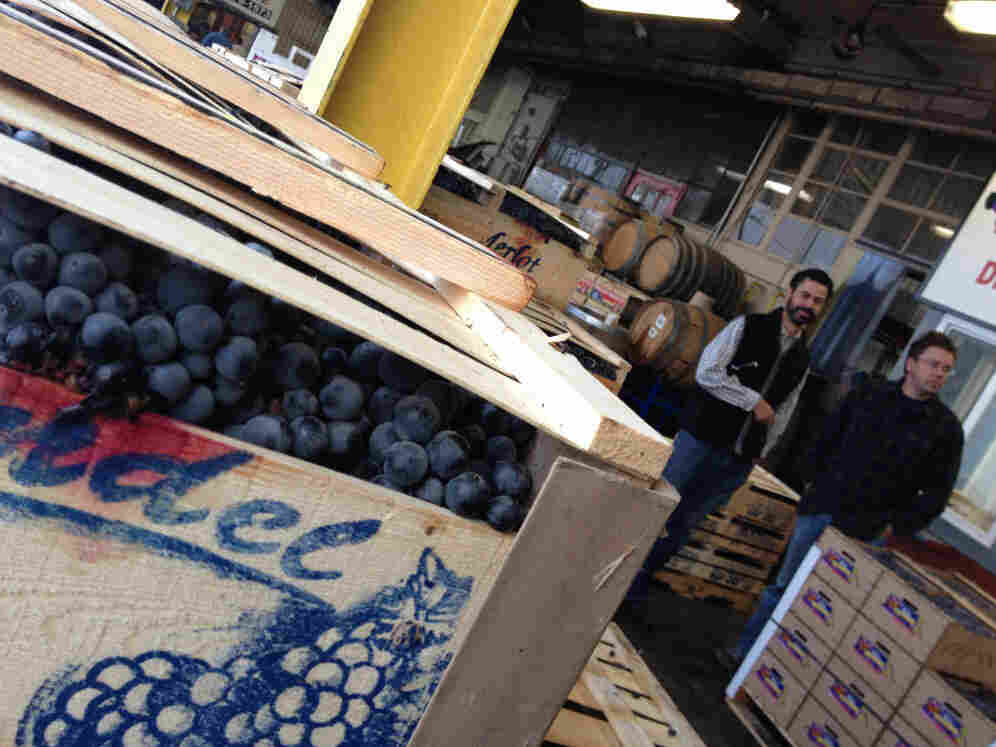 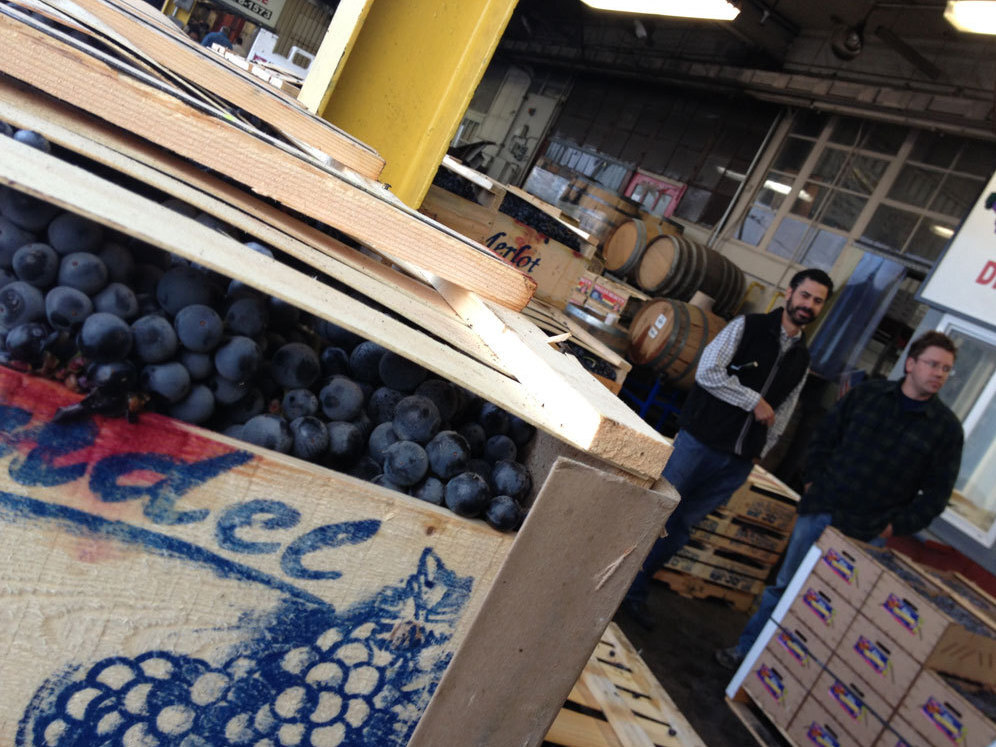 Customers at a Hartford produce market, choosing grapes to turn into homemade wine.

If buying a local wine just isn't local enough for you, then you might consider joining the growing ranks of people making homemade wine this fall.

I started making wine at home with friends a couple of years ago, and we picked up our white grapes, shipped from California, last week.

The loading dock at the M&M Wine Grape Co. in Hartford, Conn., was stacked high with boxes of grapes, destined for home winemakers. The regional market where it does business bustles with winemakers and shoppers looking for bulk produce for grocery stores and restaurants.

Around the boxes, people were wandering — mostly men. Some stuck their fingers into the boxes of merlot and muscat to taste the fruit they may want to buy, dodging forklifts as they did. Others were inside, settling their tabs.

Mario Zavaglia stood between the dock and the bed of a pickup truck, as he slid big buckets of grape juice into the truck. He told me he doesn't mess with the grapes themselves anymore, he just gets the juice. "With the grapes, you gotta work three times more," said Zavaglia. "I did it with my grandfather. My father, my grandfather did it. I was a kid."

Next to Zavaglia was a nice pickup with a trailer heavy with boxes of grapes. Its owner, Rich Sabato, is clearly a serious winemaker. He started a few years ago making small batches of wine from kits. Then, eventually, he went all in, high-tech. He has $15,000 in equipment alone, and that day, he and his friends were bringing home a gigantic haul.

"This year, we're buying 5,600 pounds of grapes," said Sabato. That's about 300 gallons of wine. For Sabato, wine making runs in the family, too. His grandfather did it — first in Italy, then in South Philadelphia.

"When he died, nobody else did it and it was kind of lost. And that's what drove me," Sabato explained. "It's not wood barrels like the old country, it's not Lucille Ball stamping it with her feet in a tank, but it's a lot of fun, a little camaraderie, and we share it with our friends."

When some friends and I decided to try it out a few years ago, we read up on it a bit. Then we started small. But last year, I found myself with 150 gallons aging in my basement.

When we picked up our chardonnay grapes this year, they'd already been taken off the stem and crushed. So all we had to do was slide them into the truck, take them home and get to work. 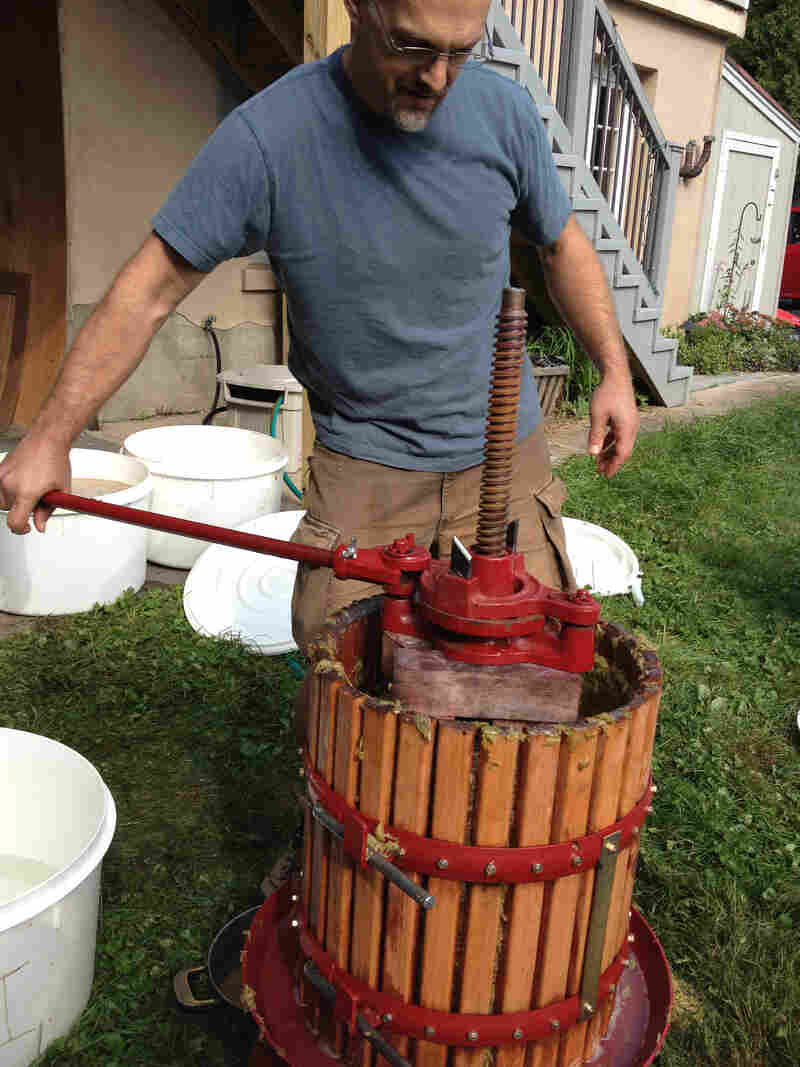 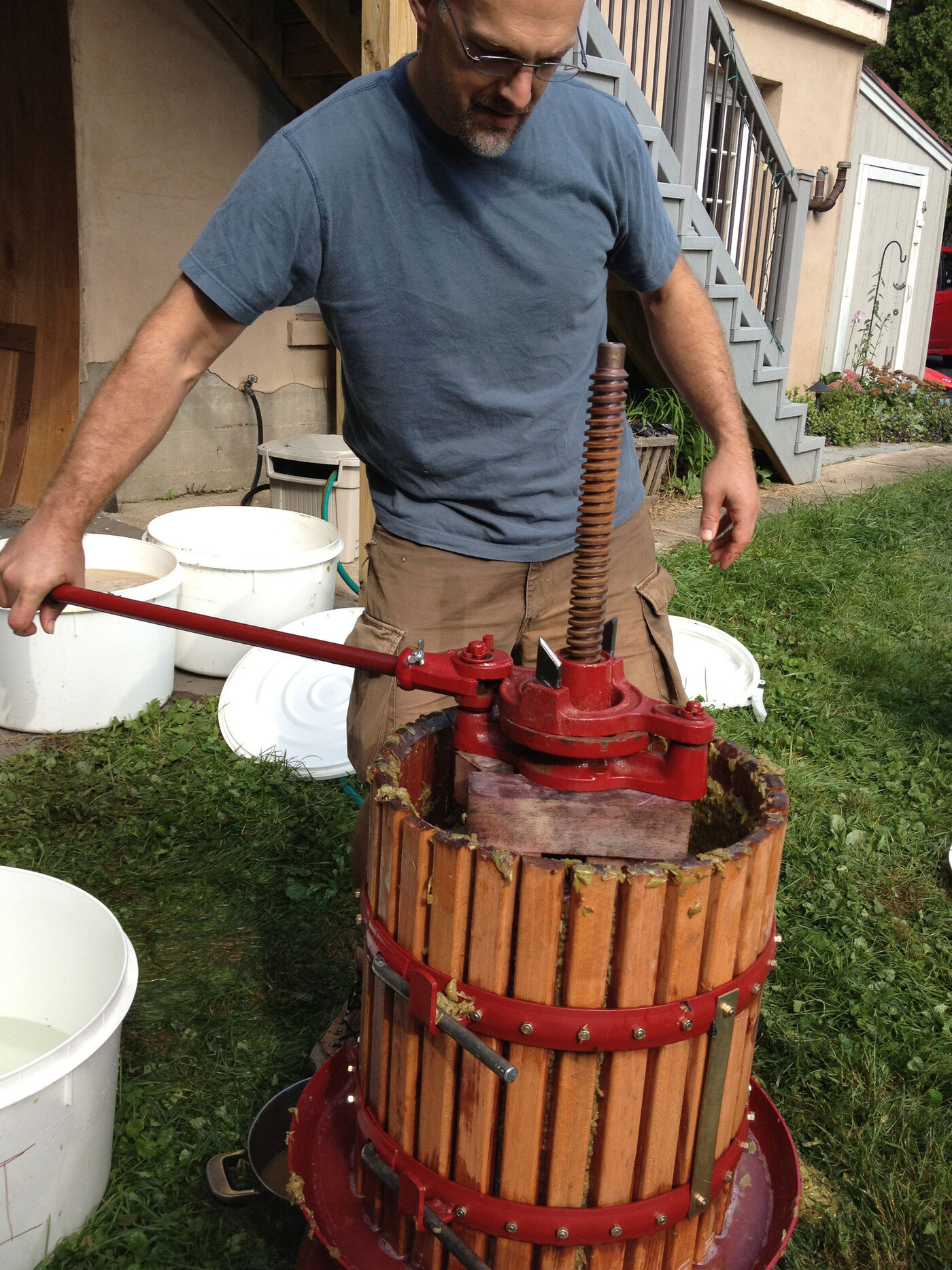 And that work includes a lot of testing. First, we test to make sure the juice has the right amount of sugar to make the right amount of alcohol after fermentation is done. If there's not enough sugar, you can add it; if there's too much, you can dilute it with distilled water. In this case, the sugar was right on target for a wine that's 12 or 13 percent alcohol, so we didn't add anything.

As for the sulfites, the retailer added the right amount of sulfites to the crushed grapes for us before we brought them home, and, at this stage, they have one very specific function — to kill off any natural yeast that may have been on the grapes.

As we test, we also press. It's a messy process. Once the press is fairly full of grape pulps, we put some wood pressing blocks on top and crank it down a few times, breaking down the pulp — or the cake. Eventually, the juice stops running. This time we got about 50 gallons worth, which we put into glass containers topped with airlocks.

Next, it's time to add the yeast we bought, but the juice has to come to room temperature first (the grapes had been refrigerated when we picked them up). So we wait a day and come back to "pitch" the yeast.

When we returned a day later, the yeast had started to work, turning juice into wine, bubbling off gas as it did.

Soon, we'll have a young chardonnay to share. In two weeks, when the red grapes come in, we'll do it all over again.