Accessibility links
In Washington State, Picker Shortage Threatens Apple Boom : The Salt Washington state apple growers are harvesting the second-largest crop in history, but it appears there won't be enough workers to get the fruit off the trees quickly enough. The next few weeks are when the bulk of the region's fruit is picked. The labor shortage comes as apple prices are high. 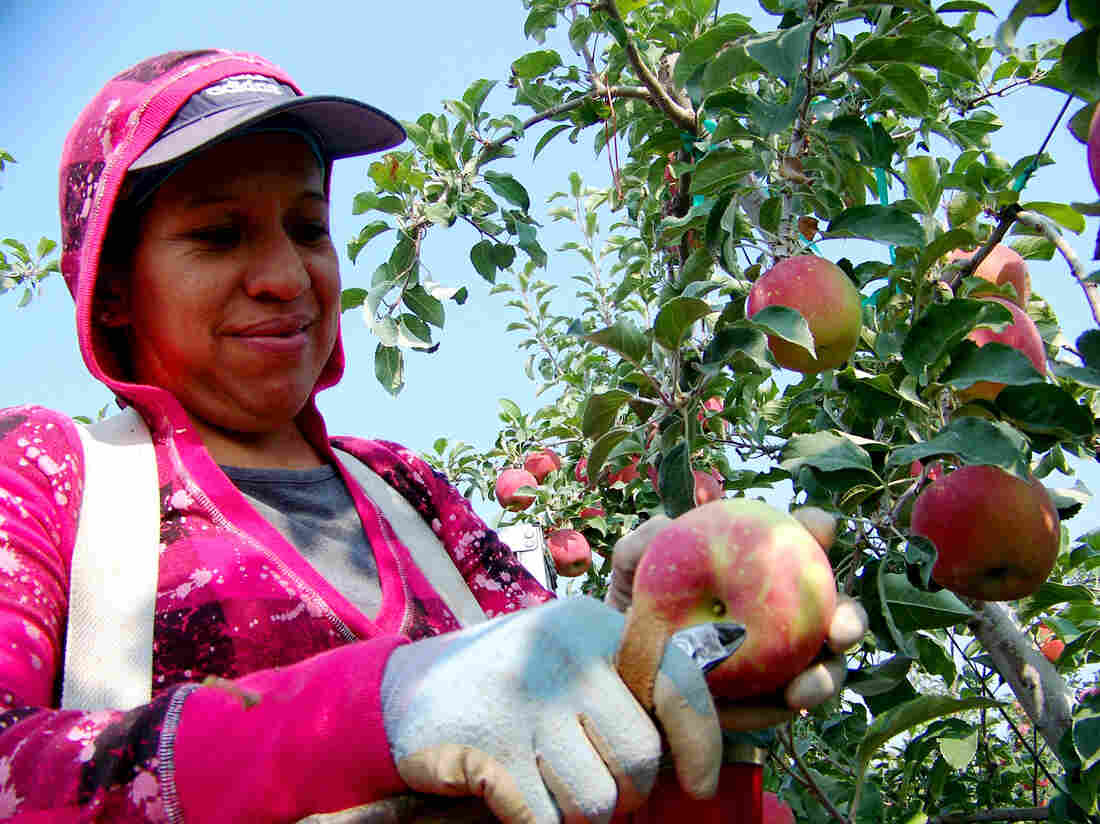 Maregarita Magana, 34, snips off the stem of an early Fuji apple in Chiawana Orchards near Pasco, Wash. State farmers worry that many apples might be left on the trees this year. Anna King/Northwest News Network hide caption 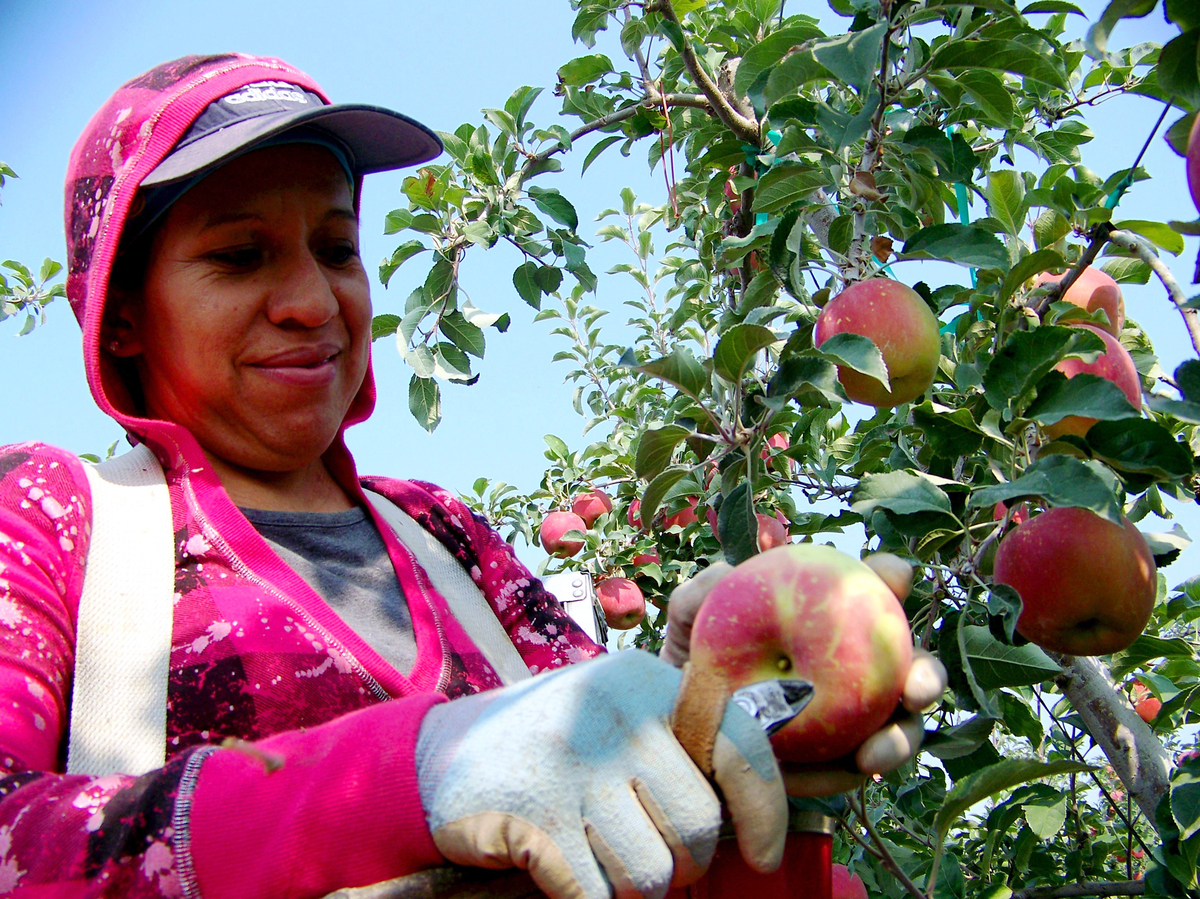 Maregarita Magana, 34, snips off the stem of an early Fuji apple in Chiawana Orchards near Pasco, Wash. State farmers worry that many apples might be left on the trees this year.

In western Michigan, there aren't enough apples to pick because bad weather decimated 85 to 90 percent of the crop. But Washington state has the opposite problem — there's an abundance of apples, but not enough pickers.

This should be the happiest, busiest time of year in Washington apple orchards. But now — just as the peak of apple harvest is coming on — Broetje Orchards manager Roger Bairstow is wincing.

"There are quite a few of us that aren't sleeping through the night," he says.

Right now, Broetje has nearly 2,000 workers. They're out on tall aluminum ladders plucking dusty red and green apples from the trees. Music plays from the smartphones of workers, and Gala apples thud gently into the waiting bins. 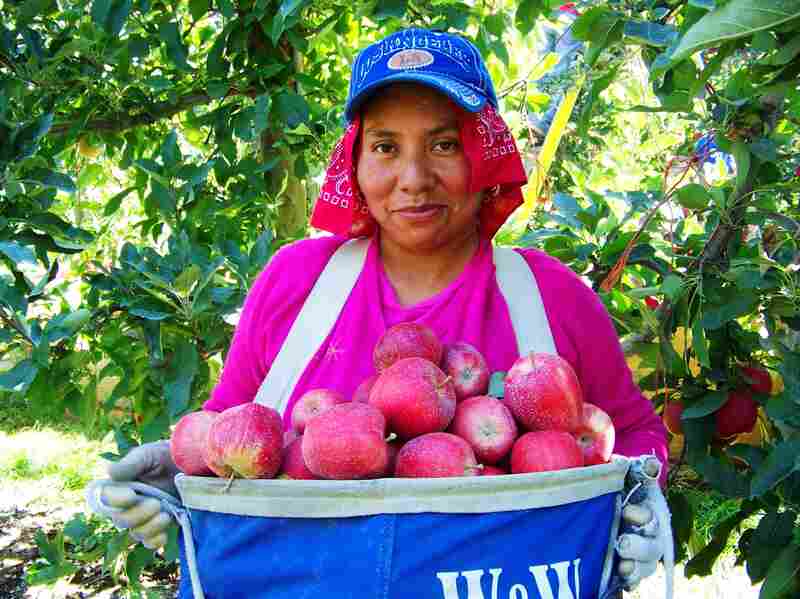 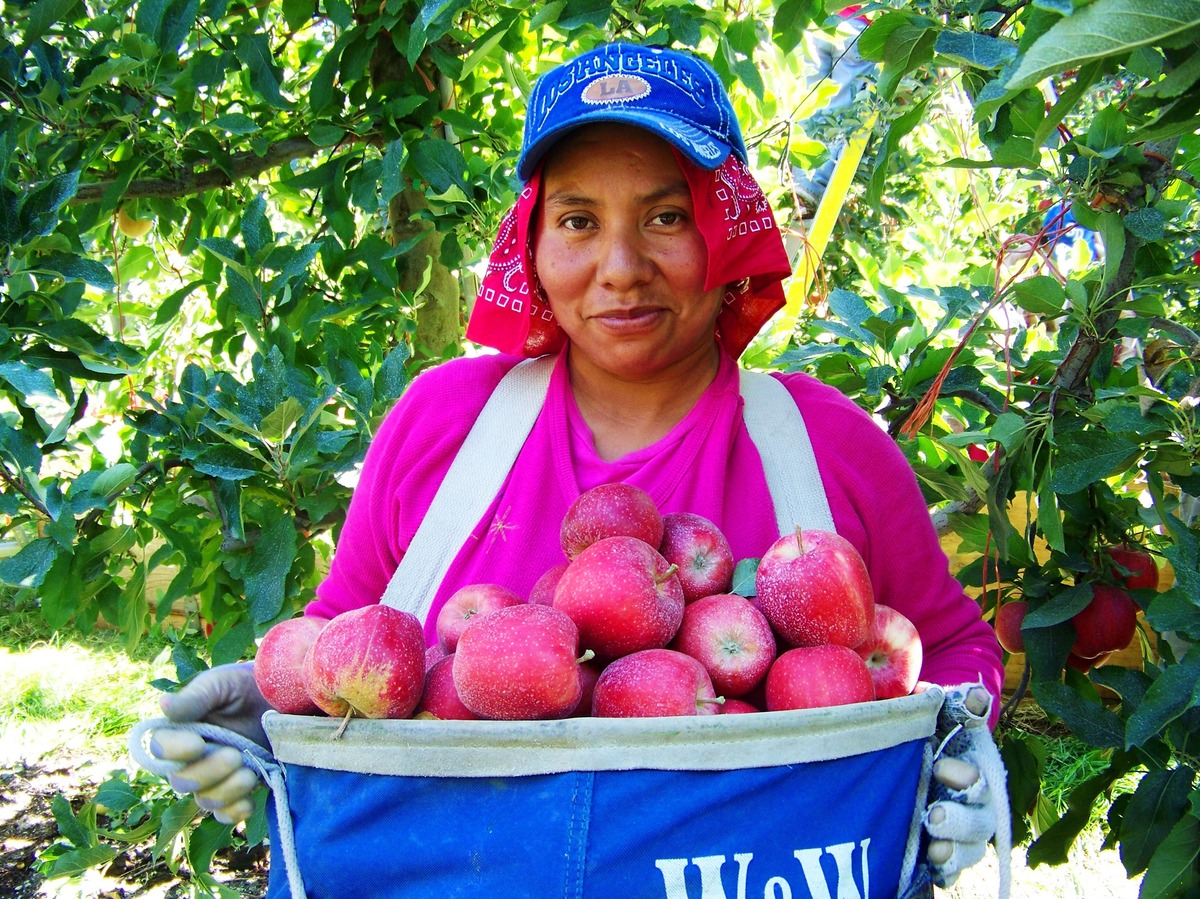 But Bairstow says the orchard still needs at least 200 more experienced pickers. And apples have a limited branch life.

"The longer an apple stays on the tree, the worse the condition gets and the less likelihood of getting a good price on the market," Bairstow says. "So at some point, it's not even worth picking."

If the fruits are left on the tree too long, they can only be used for apple sauce or juice, which is less profitable than whole fruit.

The labor shortage comes as Washington state's apples are worth more. That's because competitors like New York, Michigan, Canada and Europe have low yields this year due to bad weather. And China, the world's biggest apple producer, is keeping more of its fruit at home to feed an expanding middle class.

With the strong market, Washington farmers are going to extremes to get and keep workers. Some are buying commuter vans to transport employees from one orchard to the next. Others are paying up to 15 percent more in wages or giving bonuses for workers who stay the whole season.

Broetje is building its own rental apartments in town and advertising for pickers as far away as Arizona and Ohio. The fastest workers can earn about $1,000 per week.

"The price is good," apple picker Ruiz Olman says, and he likes working here. Olman is earning about $50 more each week compared with last year. And, for him, this orchard is easier to get to from where he lives.

But the work is physically demanding. Jeff Rippon, a manager at nearby Chiawana Orchards, says pickers have to scale tall ladders and carry 40-pound sacks of apples on their chests for at least eight hours a day. He'll hire anyone who wants the work, but he says he has trouble finding enough people. So, like many farmers across the country, he ends up relying on migrant workers.

"I've been picking apples since 1965, and I've never seen a white person yet pick more than an hour," Rippon says. "Seriously! By the time you get the paperwork done, they've decided it's too hard to do."

Another problem for farmers is that fewer migrant workers are coming up from Mexico. That's because there's more violence and increased security on the border.

It's too late to fix these problems for this year, but farmers are planning for the future. Some are planting new, shorter trees so picking is easier. Others are developing mobile platforms to help pickers gather apples without ladders. Rippon says one way or another, growers who want to stay in business will have to address the labor shortage.

For now, apple farmers are racing winter. Workers will stop showing up in the orchards as the colder weather sets in. Many farmers worry that in these next few weeks, the worker shortage will only turn more rotten.