Accessibility links
The Cost Of Saving Lives With Local Peanuts In Haiti : The Salt Fortified peanut paste saves lives in Haiti and other places where malnutrition is a problem, but producing it locally costs more than importing it from faraway factories in Europe because of labor and other costs. Still, feeding programs are willing to pay a little more, for now. 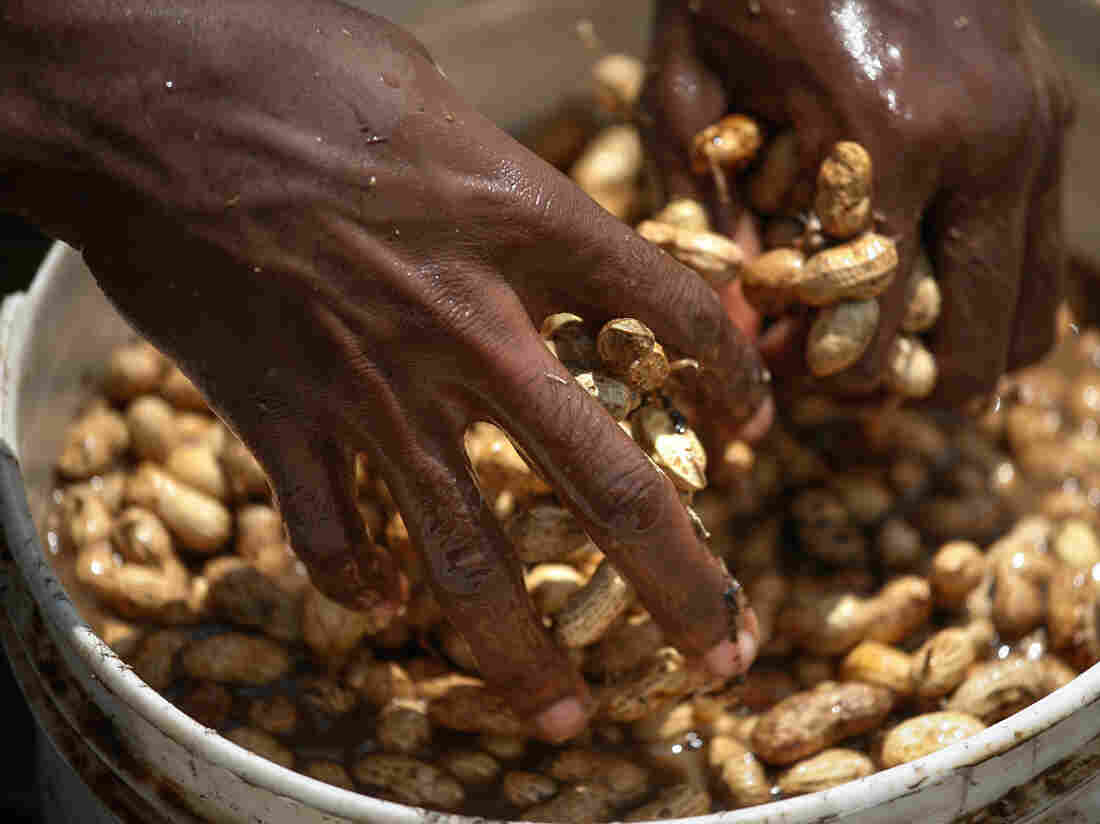 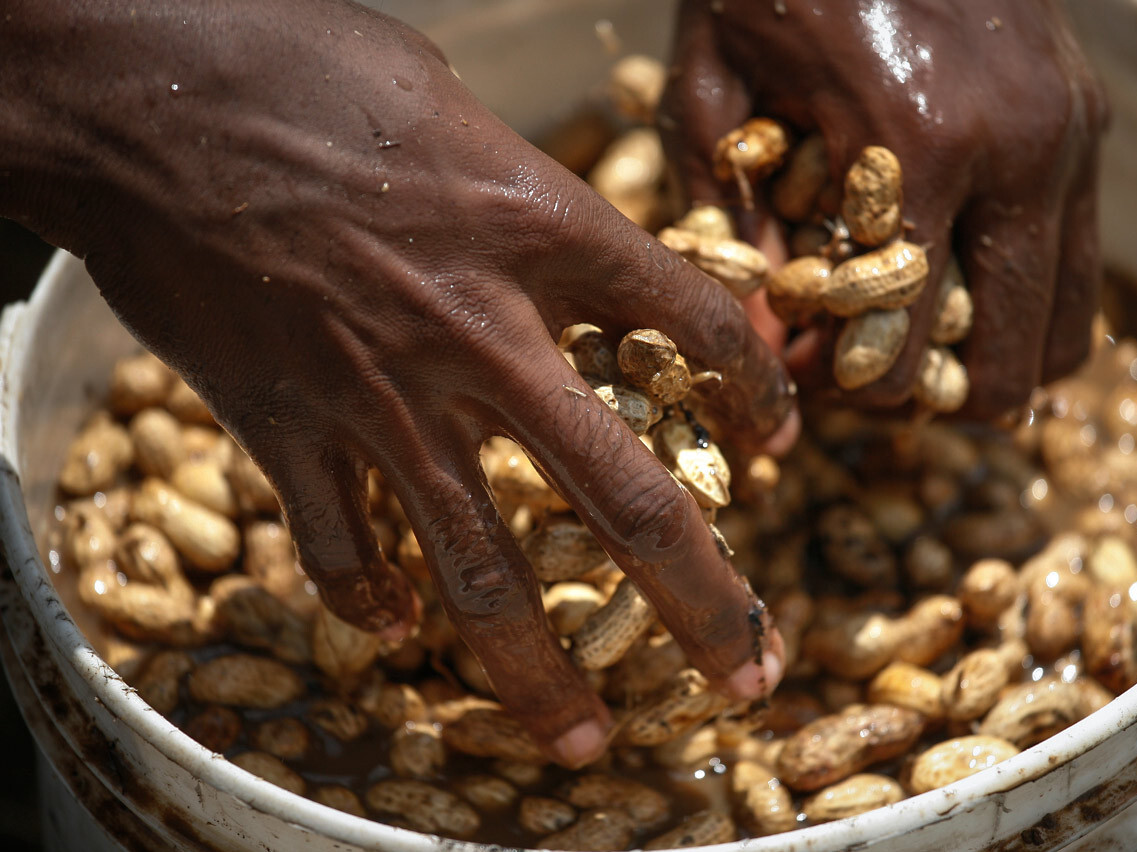 How much extra would you pay for local food? It's a familiar question. We face it practically every time we shop for groceries, either at the store or at the farmers market. But what about food that can save the lives of severely malnourished children?

Some humanitarian groups are confronting that question. The food, in this case, is a kind of enriched peanut butter that helps malnourished children regain their health.

The organizations are trying to make this food right where it's used — in Haiti, Malawi, Ethiopia and Niger. They see local production as a way to provide jobs and bring money into impoverished communities. But paying the bill is still a struggle. Even in poor countries, local food often turns out to be more expensive food.

To understand why, we'll take a closer look at one of these places: Cap-Haitien, a city on the northern coast of Haiti.

There's a shantytown on the edge of the city called Shada. The homes are jammed up against each other with barely space to walk between them. And in the middle of this slum, Madame Bwa is running a free clinic.

"This is the list of the kids that we provided services to yesterday," she says, pulling out a ragged piece of paper with 41 names scrawled on it. All of these children, she says, showed signs of malnutrition. "Some of them have big belly or yellow-red hair. Their eyes are white and their skin does not look well."

The prescription? Medika Mamba, Creole for "peanut butter medicine." This peanut butter has a lot of extra ingredients: milk powder, oil, sugar and all the vitamins and minerals a growing child needs.

After three or four weeks of eating this daily package of energy and nutrients, the children will be fine, she says.

This recipe has transformed the treatment of malnutrition. A French doctor, Andre Briend, came up with it just over a decade ago. In much of the world, it's called Plumpy'Nut. Among specialists, it's called ready-to-use therapeutic food, or just RUTF.

Previously, treatment of severe malnutrition meant liquid milk, sugar, oil and sometimes some added vitamins and minerals. It required refrigeration, in many cases a feeding tube and lots of time in a hospital. Yet many kids still didn't get better. 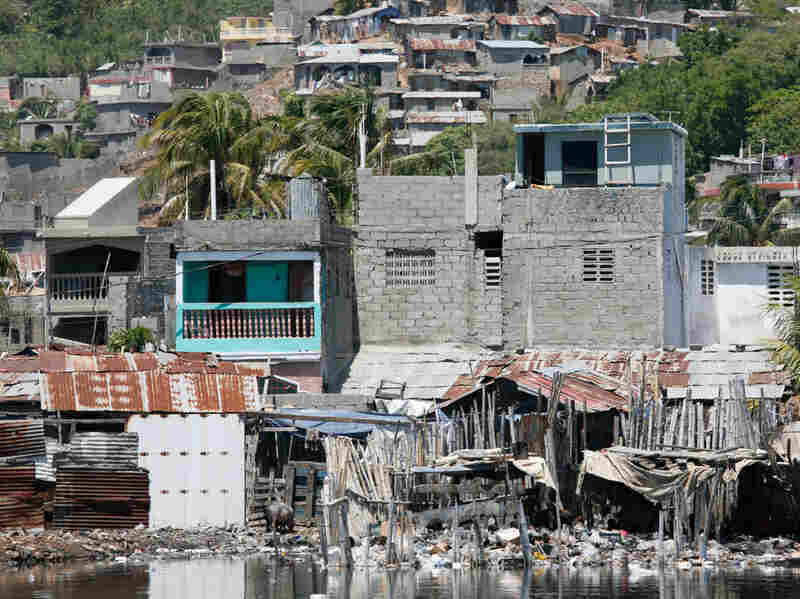 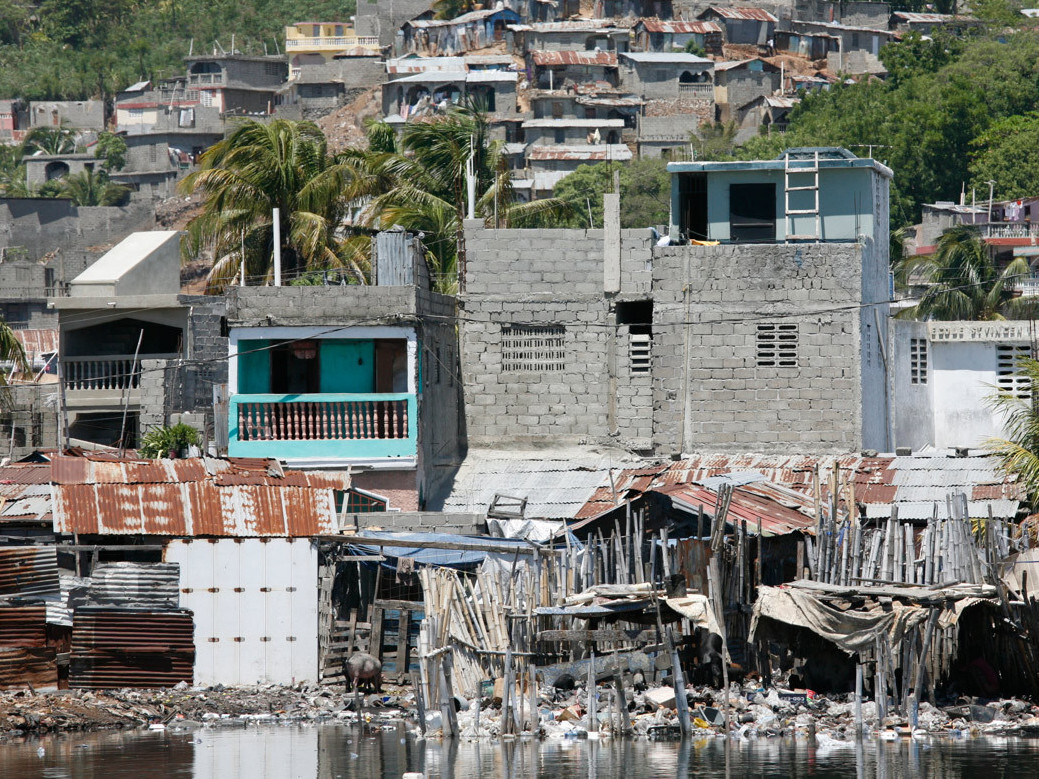 By contrast, the peanut paste can be eaten at home, children like it, and more survive on it. It's now the gold standard treatment all over the world.

It's a medical triumph. But there's also a business side of this story that's still being written. This is where we run into the tension between the global and local food production.

Pat Wolff, a pediatrician from St. Louis, has been living that tension.

In 2003, she founded an organization, Meds and Food for Kids, specifically to bring ready-to-use therapeutic food to Haiti. It started small, grinding up peanuts in a rented house in Cap-Haitien and stirring all of the ingredients together. The group called its product Medika Mamba and distributed it to local clinics.

One day, Wolff had an epiphany. MFK's product might actually provide those much-needed jobs, if it was made on a much bigger scale.

By this time, about five years ago, peanut paste had become big business. UNICEF was buying millions of dollars worth of it every year for distribution in Haiti alone. But UNICEF was buying it from pristine, quality-controlled factories far away — mostly in France. (The leading manufacturer is Nutriset, based in Normandy.) The peanuts came from Argentina, among other places.

Part of this dream is becoming reality.

The factory, just a few miles from the slums of Cap-Haitien, is filled with stainless steel machines spitting out little sealed packages of enriched peanut butter. Those packages will go to UNICEF, or the World Food Program, and then to hospitals and clinics all over Haiti.

An even bigger impact of this local production might be felt in the countryside, among Haitian farmers who grow peanuts.

Jamie Rhoads, who's been living in Haiti since 2003 and working with MFK since 2009, is in charge of the organization's work with farmers.

As we drive out to meet some of them, Rhoads talks about the potential of this area, the northern plain of Haiti. In colonial times, he says, it was among the richest agricultural areas in the world. "The soil fertility is really good; there's water everywhere; it's, like, this gold mine of agricultural wealth waiting to happen. I mean, look around you — it's totally green. They can grow whatever they want here." 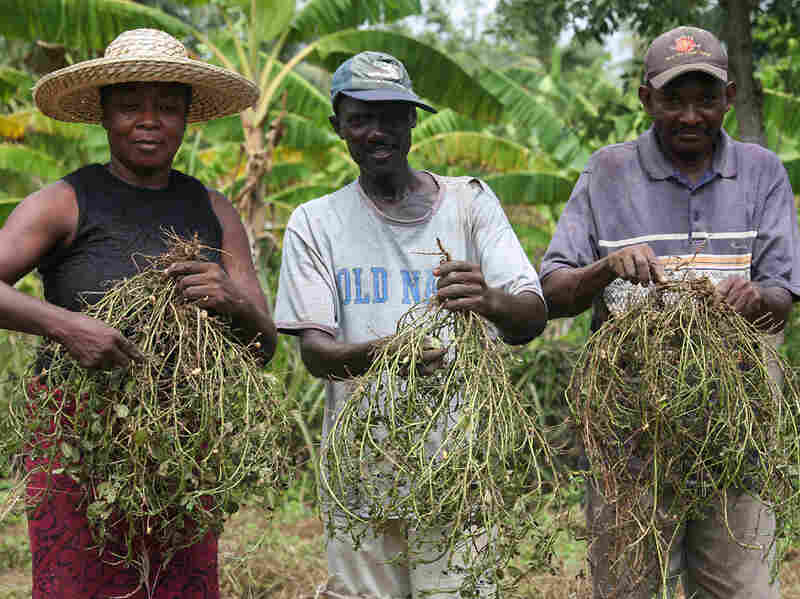 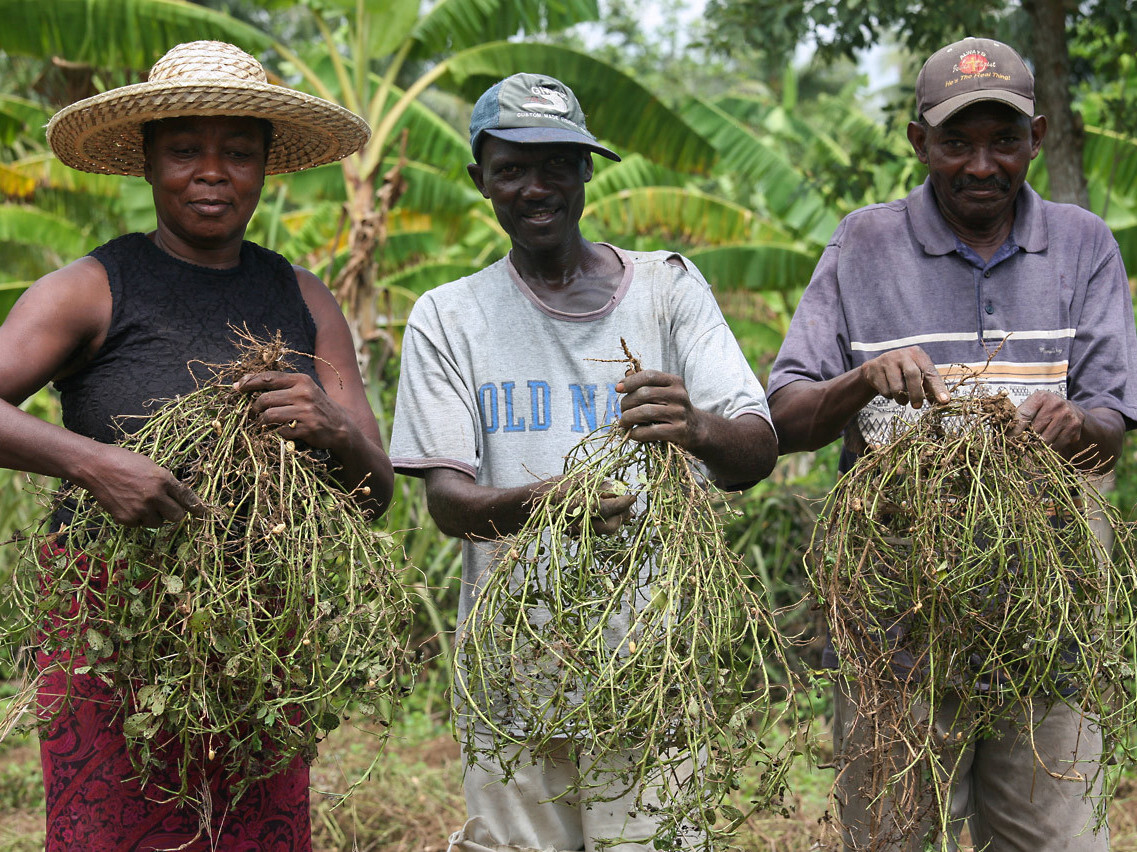 When we get to the farm, we walk right into the middle of a peanut-harvesting party. I see big piles of peanut plants, just pulled from the earth. Men and women are sitting beside them, picking peanuts off the roots and dropping them into buckets. The women are singing; young men are playing wooden flutes.

These farmers are growing peanuts for MFK's new peanut butter factory, and MFK is helping them do it more cheaply. The organization brought in a small tractor to help clear the fields and also sprayed the plants with a chemical that controls fungal diseases.

As a result, the farmers tell me, they're getting almost twice as many peanuts as in previous years.

"This is a big step," says Rhoads, watching the scene. "This is the first time I've been around a harvest where the peanuts look this good. Everybody is telling me, 'In my whole life I've never seen peanuts like this.' "

It's crucial to produce high-quality peanuts, because one of the biggest problems with local production of RUTF in Haiti is the prevalence of peanuts contaminated with aflatoxins. These powerful toxins are "the bane of our existence," says Rhoads. To make sure their product doesn't contain this poison, MFK has to sort its peanuts carefully and test every batch.

More farmers want to join the program, which should mean more peanuts for MFK's factory and more money in farmers' pockets.

It's all great, except for one thing: economics.

These local peanuts still cost too much, in large part because small Haitian farmers have so little machinery. They have to pay people to plant by hand, weed by hand and harvest the peanuts by hand.

So Meds and Food for Kids actually pays more for these Haitian peanuts than peanuts it imports from Argentina, and that higher cost is tough to pass along to customers, Rhoads says. "UNICEF and others are very price sensitive, and we're competing with the international market."

Other organizations that try to make this food locally in other countries report the same thing. Local production often turns out to be more expensive production.

For now, at least, UNICEF has agreed to buy local, even if it costs a little more — even 20 percent more.

But the big, long-term goal, Jamie Rhoads says, is to keep working with the peanut farmers, helping them grow more peanuts for less money.

Rhoads thinks they can do it, with some new disease-resistant peanut varieties currently grown in India and now being tested in Haiti, and a little more labor-saving equipment. If they succeed, he says, these farmers won't even need MFK's factory anymore. They'll be able to sell their peanuts for a good price at any market in Haiti.

They'll make a lot of money, he says, and in the end, that's the best way to make sure their children won't go hungry.