Accessibility links
Why Foods Go Together Like 'Rama Lama Lama, Ke Ding A De Dinga Dong' : The Salt Red meat and red wine are the yin and yang of the food world. They're opposites, scientifically speaking. That's why they and other common combos make such a great pair. 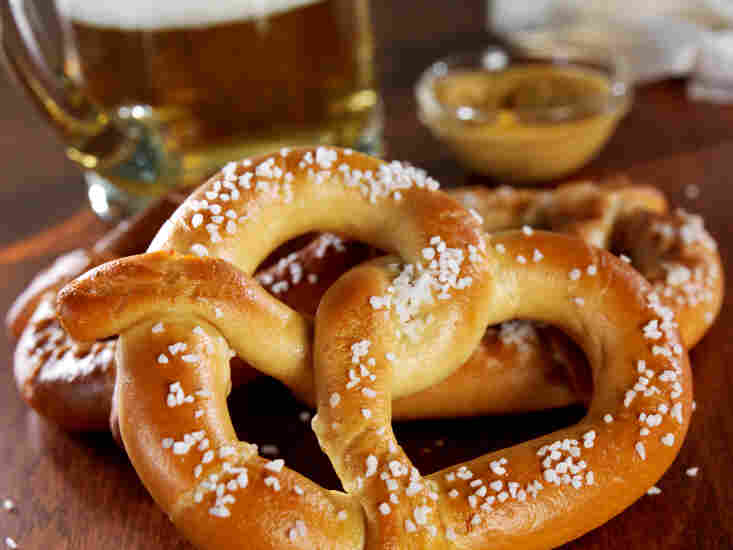 Taking a bite out of a salty pretzel can actually enhance the bitterness of your beer. That's one reason pretzels and beer work as a pair. James Puccio/iStockPhoto hide caption 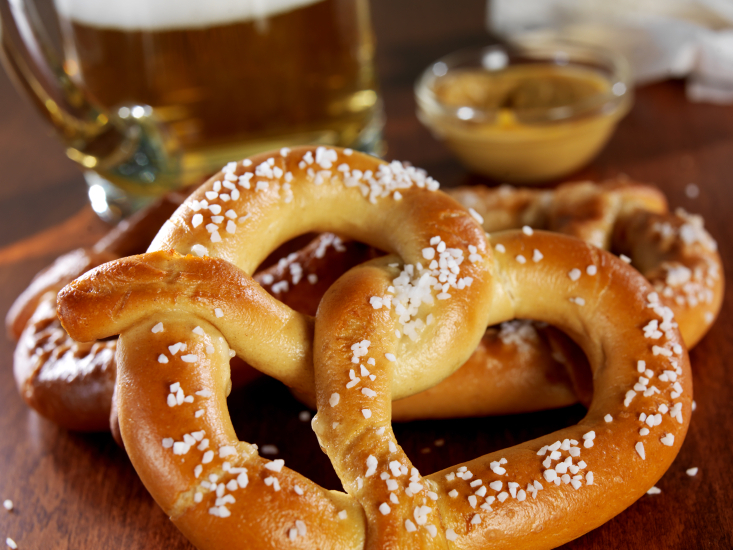 Taking a bite out of a salty pretzel can actually enhance the bitterness of your beer. That's one reason pretzels and beer work as a pair.

OK, Grease lyrics aside, when it comes to gastronomy, certain foods just belong together: red wine and red meat, sushi and ginger, tea and biscuits, beer and pretzels. But, ever wonder why your favorite cabernet goes so well with a nice filet mignon? What makes two flavors jibe?

"Lots of things come together to make flavor, whether it's hot, cold, lubricating, how it smells, what we taste. Flavor is an incredibly multisensory sensation," says Paul Breslin, an experimental psychologist at Rutgers University in New Brunswick and the Monell Chemical Senses Center in Philadelphia. Color and sound even impact how we perceive food. But, in a recent experiment, Breslin zeroed in on how food feels in our mouths.

Breslin and his colleagues published a study this week in Current Biology that delves into why fatty foods and astringent drinks pair well. Even though the drinks are only weakly astringent, such beverages (wine, tea, beer, etc.) build in astringency with every sip, creating a strong feeling of dryness in your mouth. Conversely, fatty foods lubricate your mouth and make it feel slimy.

"Our mouth really wants to be in a position of balance," says Breslin. And the more you sip and chew, the better your mouth feels.

Texture and feeling are clearly important to food enjoyment. "Dry things, especially something like shortbread, go with beverages because you need a lot of saliva to swallow dry things," says Marcia Pelchat, a psychologist at Monell who was not associated with Breslin's study. It's why milk and cookies or tea and biscuits are tried-and-true combinations. Asian cultures frequently pair tea and rice for the same reason (but hold the milk if you want the full effect of tea's health benefits).

Mixing different textures can also appeal to the mouth. That's one reason why some people can't stand soggy cereal, she says.

That's not to say taste isn't vital as well. Take beer and pretzels, for example. Salt typically reduces bitter tastes, but in the case of beer, it actually enhances the bitterness — something that might appeal to beer drinkers who like bitter flavors, says Pelchat.

Pairing two sweet things together — like a sweet desert wine and a slice of German chocolate cake — also comes down to taste. Because once you've taken a bite of the super sweet cake, the wine suddenly doesn't taste quite as sweet. (In addition, its astringency contrasts nicely.) This is called taste adaptation. "Every bite impacts how you perceive the next bite," explains Pelchat.

Some scientists have even gone as far as hypothesizing that foods with compatible flavors share chemical components. As we reported last December, University of Cambridge researchers compiled a "global flavor map" and found that Western cuisine often pairs like with like, chemically speaking. Think milk and eggs, vanilla and cocoa. Meanwhile, Asian cultures do the opposite.

So, how much of this is science and how much is culture? Breslin's finding about astringents and fats seems to hold true across hemispheres. "When you eat sushi or sashimi, that ginger refreshes your mouth. The same goes for a pickle and a corned beef sandwich. The French use sorbet and wine as a palate cleanser, while in some parts of Africa and Asia they use tea," says Breslin. "Different gastronomies pair them in different ways."

We'll drink to that.