Accessibility links
Making 'The Science Of Good Cooking' Look Easy : The Salt Forget the room-temperature eggs and the tenderizing meat with a marinade, America's Test Kitchen host Chris Kimball tells Morning Edition. A little bit of science goes a long way in the kitchen, he says. 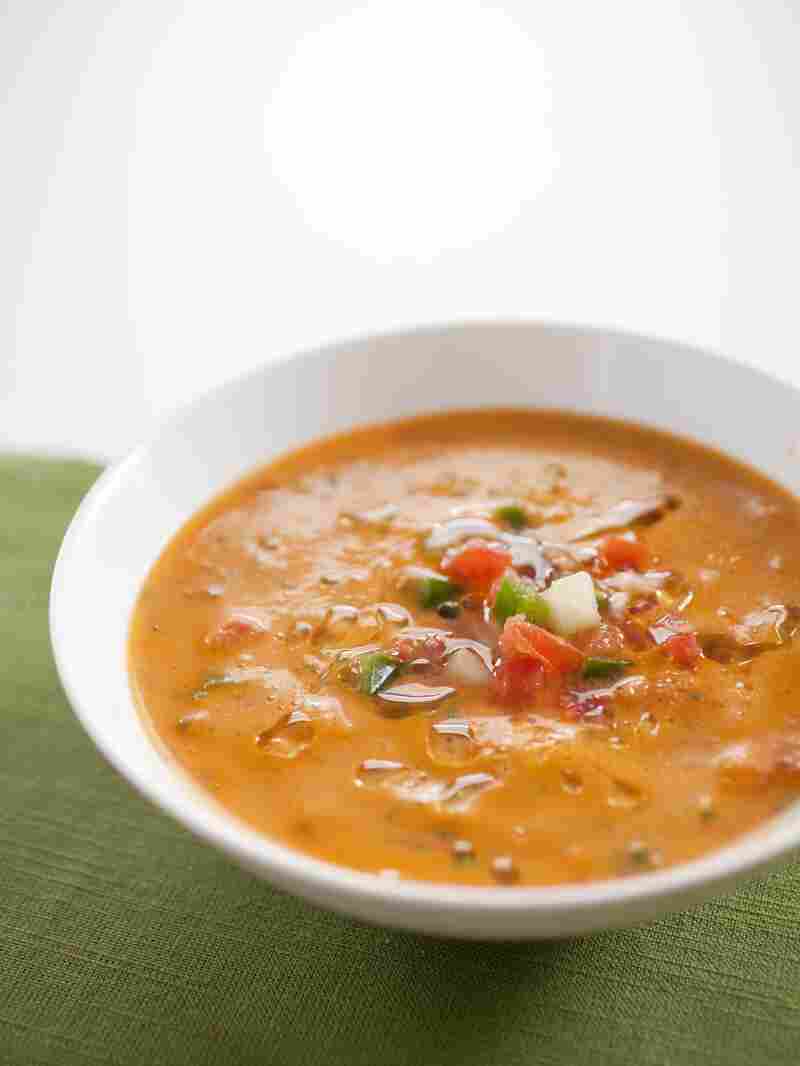 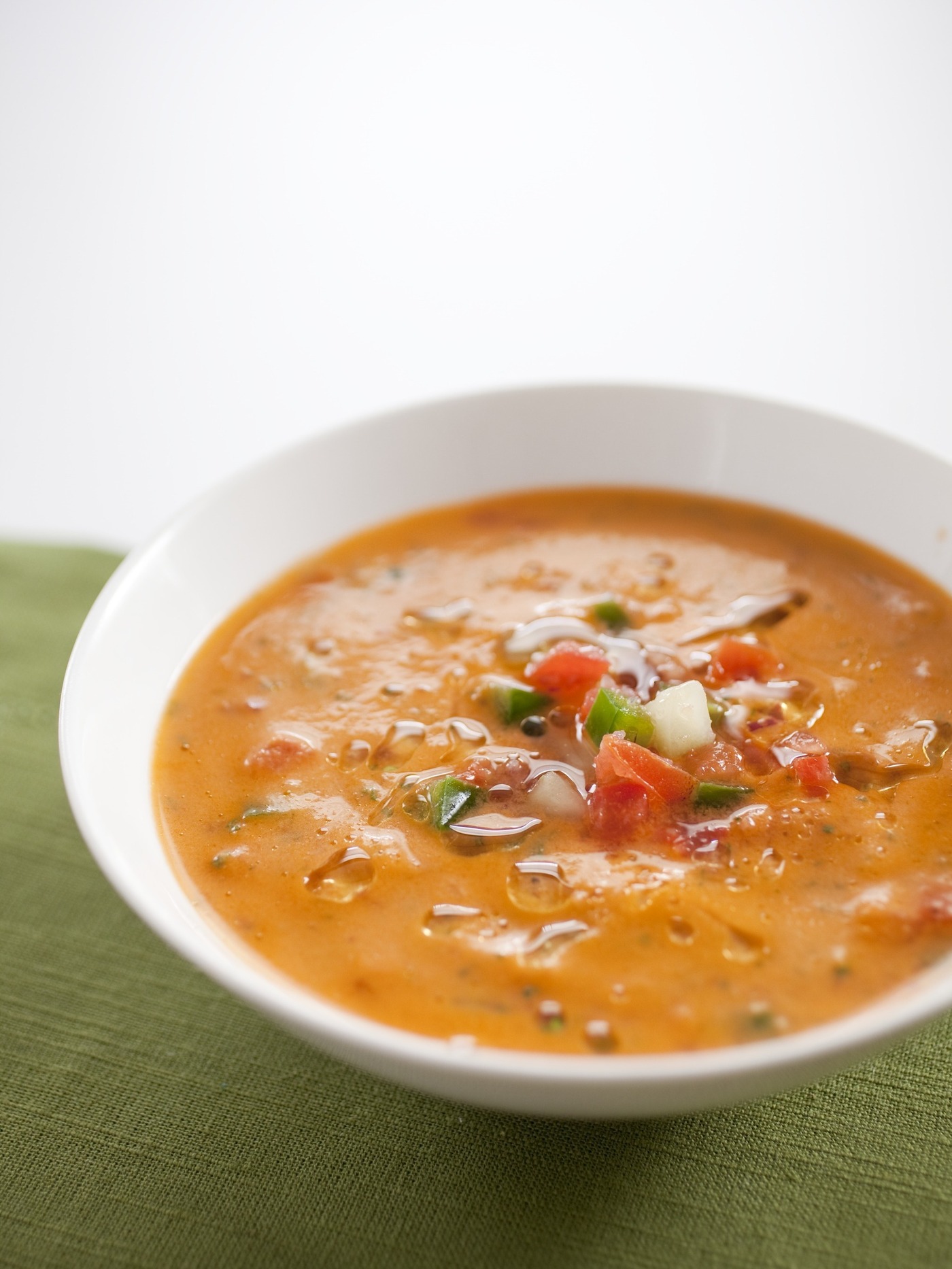 Want a better-tasting gazpacho? Don't toss out the tomato seeds.

Ever wondered why you're not supposed to bake with cold eggs or whether marinating really tenderizes meat? Read on.

America's Test Kitchen host Chris Kimball "whisks away" some cooking myths as he talks with Morning Edition host Renee Montagne about the book he wrote, The Science of Good Cooking, with fellow Cook's Illustrated magazine editors. Being the science and cooking geeks that we are, we tuned in.

If you've ever looked up a meat recipe online, chances are it calls for a marinade. But marinating doesn't really tenderize meat. "This is your awakening," Kimball tells Montagne.

"The problem is, marinades contain acids, usually vinegar, and those break down meat but only to about a quarter of an inch of thickness. And when they break it down, they turn it to mush. They don't really tenderize it," he says.

"What does work is salting," Kimball says. "Salt gets in, it allows the protein molecules to absorb water, it loosens up the protein fibers so it retains that water and it's easier to chew." So brining meats in a mixture of salt and water and sometimes sugar is what produces a juicier meat. (Remember that, as you get ready for Turkey Day next month.)

Another myth Kimball busts is about seeding tomatoes. A lot of soup recipes call for the tedious process of ripping the seeds out of tomatoes for a smooth soup or gazpacho.

While you may get a smoother soup, you won't get one that's as tasty as it could be. "It turns out the seed in [the tomato] jelly ... has three times more flavor compounds called glutamates than the flesh, so when you seed the tomato... you're actually throwing out most of the flavor," Kimball explains.

Glutamates are what give tomatoes that meaty, umami mouthfeel. They also give MSG its flavor, but that's for another day.

Kimball tells Montagne it's totally fine to bake with cold eggs straight from the fridge most of the time, despite the fact that many baking recipes call for room-temperature ingredients. 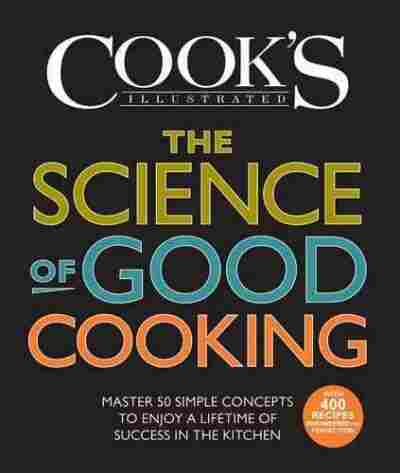 The Science Of Good Cooking

"For years I've made cakes with cold eggs and they come out OK. It does make a difference when you're making a cake that's heavily dependent on egg whites ... like angel food cakes," he says. (According to The Science of Good Cooking, that's because cold eggs don't whip as well as room-temperature eggs, and when Kimball and crew tested them, those "finicky" cakes didn't rise right and became too dense.)

But Montagne is skeptical about whether Kimball has fully embraced this idea.

"Your recipe [for fluffy yellow layer cake] includes, I quote, 'bring all the ingredients to room temperature before beginning this recipe,'" she says.

"There's an old expression, do as I say and not as I do," Kimball says, laughing. "I am mature enough to recognize that we've held onto these myths in the kitchen.... We can grow. We can learn, too," he says.

"A little bit of science goes a long way in the kitchen, and it can make a big difference."

For more science tips and tricks from Chris Kimball, listen to the entire Morning Edition interview.