Accessibility links
Kelp For Farmers: Seaweed Becomes A New Crop In America : The Salt Seaweed farms off the coast of Connecticut may provide financial relief for farmers and environmental benefits for the ocean, not to mention tasty inspiration for chefs. The plant is used in many products from biofuels to cosmetics. But the big question is: Will Americans eat the stuff? 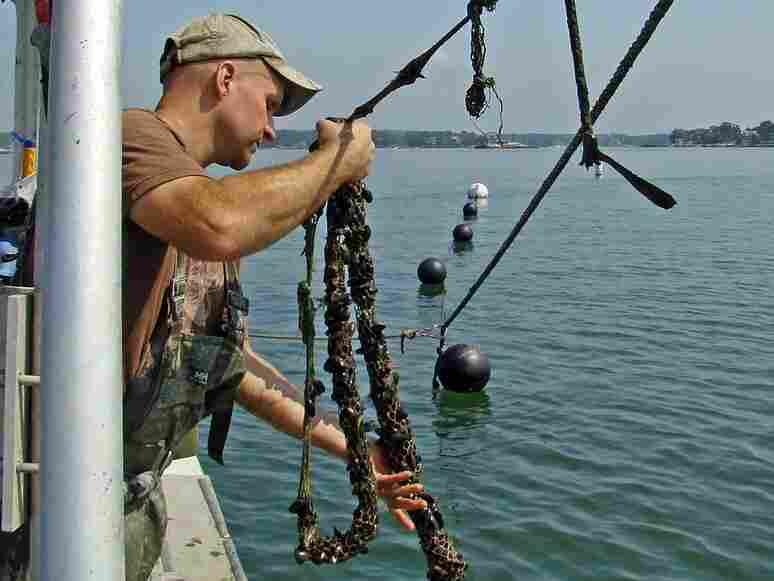 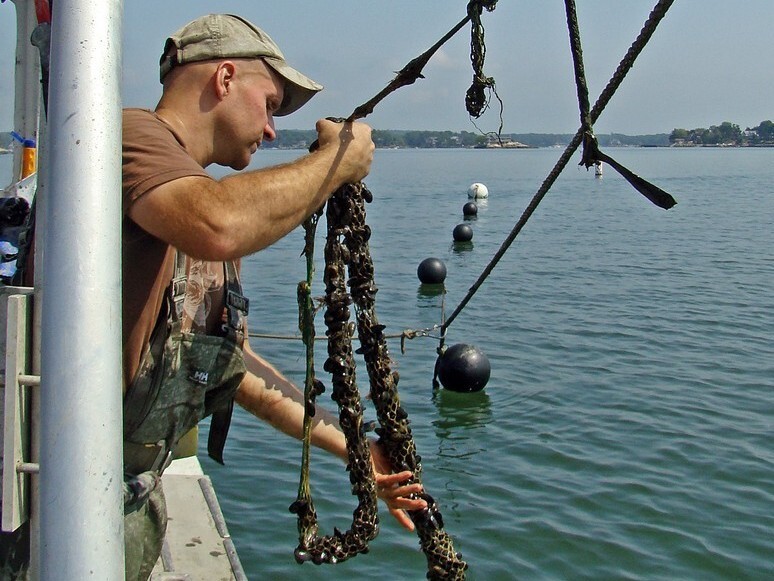 A new kind of crop is being planted in the United States, and it doesn't require any land or fertilizer. Farming it improves the environment, and it can be used in a number of ways. So what is this miracle cash crop of the future?

Charlie Yarish, professor of ecology and evolutionary biology at the University of Connecticut, loves seaweed. In nature, he says, when seaweed turns a rich chocolate color, that means the plant is picking up nitrogen, a process called nutrient bioextraction.

And for Yarish, this nitrogen extraction is the most exciting aspect of seaweed farming. Many plants and animals cannot survive when there is too much nitrogen in the water, but seaweed is able to "capture" the nitrogen, as well as contaminants in the water.

A United Nations report says that nearly 16 million tons of seaweed were farmed in 2008 — most of it in Asia. Yarish helped a company called Ocean Approved start the United States' first open-water kelp farm in the Gulf of Maine in 2006, and the business is growing. Now, he's helping to create a seaweed farm off the coast of Connecticut.

Bren Smith owns and runs the Thimble Island Oyster Company, off the coast of Branford, Conn. After his business was hit hard by Tropical Storm Irene last year, ruining about 80 percent of the shellfish crop, Smith started looking around for something more resilient to farm. That's when he found Yarish, who agreed to help set him up in the seaweed farming business.

This fall, in the water above his shellfishing lines, he'll stretch a 150-foot line about a meter below the surface of the water. They'll be seeded with kelp spores grown in Yarish's lab.

"There's no barns, there's no tractors. This is what's so special about ocean farming. It's that it's got a small footprint and it's under the water. I mean, we're so lucky; I feel like I stumbled on this just great secret that we then can model and spread out to other places," Smith says.

Kelp grows in the winter time, and by spring, Smith should have 9 to 12 feet of growth. He and Yarish are hoping to try another species in the summer. Because shellfishing is so heavily regulated, the waters near the Thimble Islands are clean, and the seaweed is safe to eat. And it will also help remove nitrogen from the water.

"The plan is to actually split it into a couple different experimental markets — one for food, one for fertilizer, one for fish food. I'm [also] working with a skin care company in Connecticut, and then one for biofuel," Smith says. He's even hoping he can someday fuel his own boat with biofuel from the seaweed.

Smith is most hopeful that seaweed will take off as a food, but here's the big question: Will Americans eat seaweed? "If I can't figure out how [to] make this taste good, I'm going to lose a lot of money out here," he says.

That's where chefs like David Santos come in. Santos has worked at some top restaurants in New Jersey and New York. He now runs a private supper club in the New York area, and is planning to open his own restaurant soon.

Santos says the food world works in kind of a trickle-down way, starting with the fancy restaurants. "If the big chefs don't use it, it will never catch. Like, it just won't," he says.

But seaweed is a great ingredient, Santos says, and if chefs start having access to a fresh locally farmed product, they'll start using it. "So if you're the cool guy using the fresh seaweed first, like, that's a big deal," he says.

Santos says he's hoping to go to Bren Smith's Connecticut farm this spring with some of his chef friends to check it out for themselves. But he's also looking forward to creating some new seaweed dishes.