Accessibility links
Top Five Myths Of Genetically Modified Seeds, Busted : The Salt We're putting a stop to some of the myths about genetically modified seeds and when farmers can be sued over them.

Having just stepped into the shouting match over patents on genetically engineered crops, there are a few small things that I, too, would like to get off my chest.

I say small things. I'm not talking about today's big hot issues: Whether genetically modified organisms — GMOs — should be labeled, or cause cancer in rats, or might improve the lives of poor farmers in Africa; none of that.

This is about something simple: Seeds of GMOs. Various myths have grown up around these seeds. Like most myths, they are inspired by reality. But they've wandered off into the world of fiction. 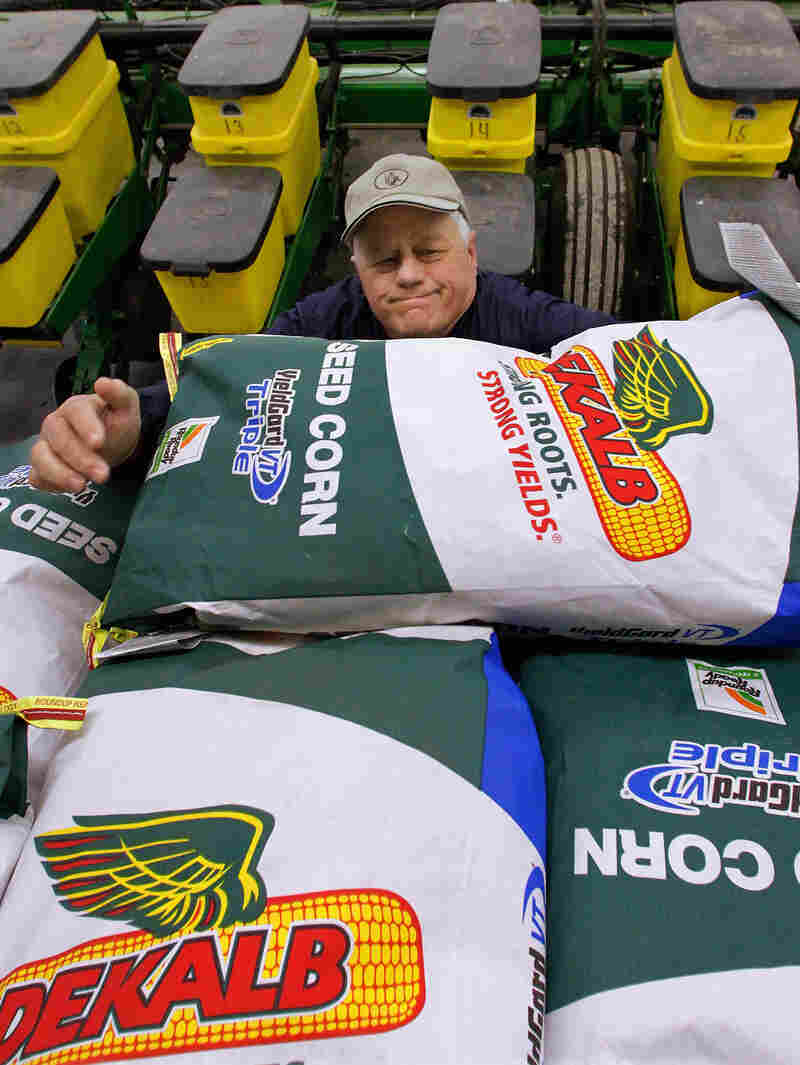 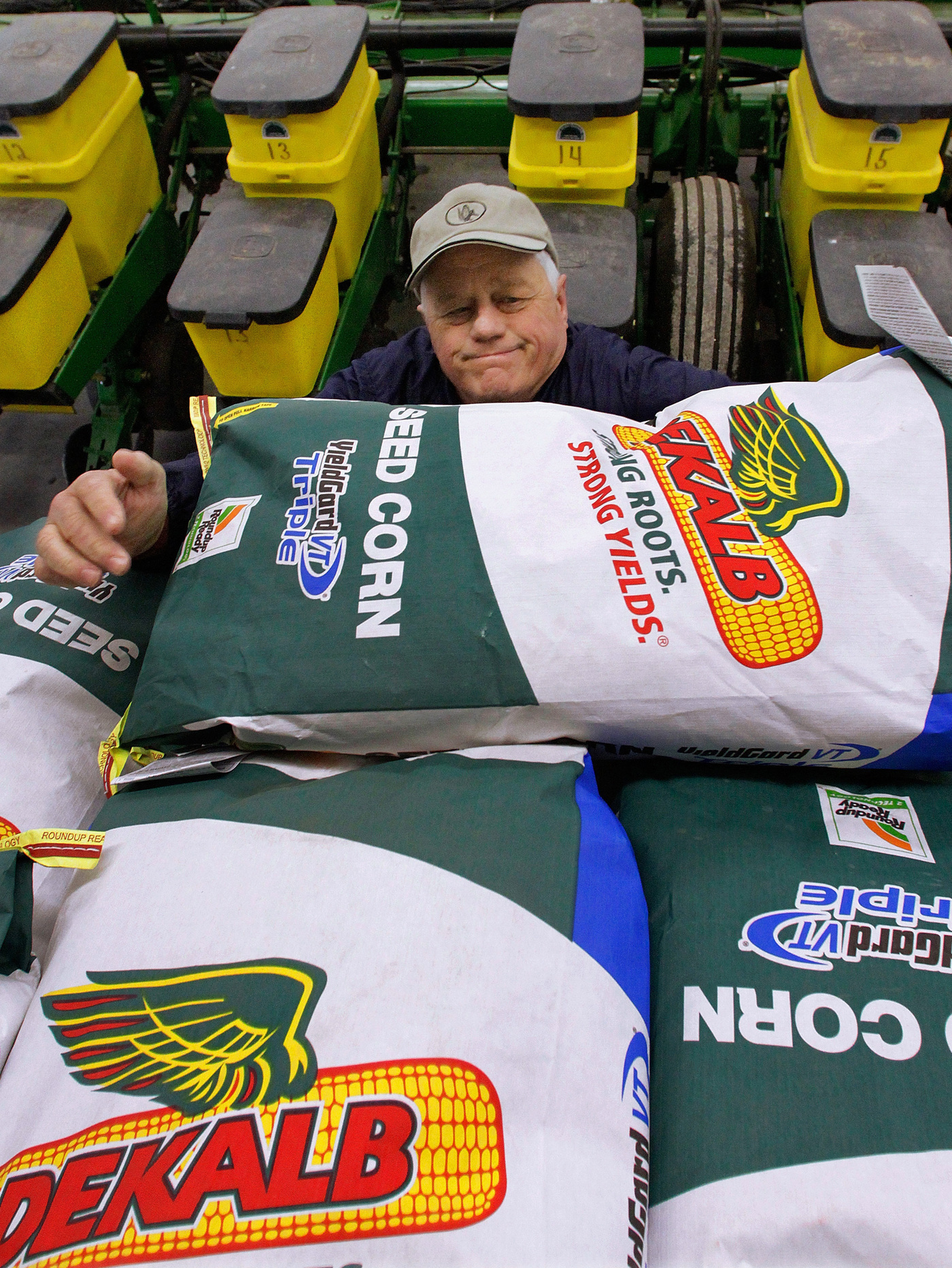 Myth 1: Seeds from GMOs are sterile.

No, they'll germinate and grow just like any other plant. This idea presumably has its roots in a real genetic modification (dubbed the Terminator Gene by anti-biotech activists) that can make a plant produce sterile seeds. Monsanto owns the patent on this technique, but has promised not to use it.

Now, biotech companies — and Monsanto in particular — do seem to wish that this idea were true. They do their best to keep farmers from replanting the offspring from GMOs. But they do this because, in fact, those seeds will multiply.

Myth 2: Monsanto will sue you for growing their patented GMOs if traces of those GMOs entered your fields through wind-blown pollen.

This is the idea that I see most often. A group of organic farmers, in fact, recently sued Monsanto, asserting that GMOs might contaminate their crops and then Monsanto might accuse them of patent infringement. The farmers couldn't cite a single instance in which this had happened, though, and the judge dismissed the case.

The idea, however, is inspired by a real-world event. Back in 1999, Monsanto sued a Canadian canola farmer, Percy Schmeiser, for growing the company's Roundup-tolerant canola without paying any royalty or "technology fee." Schmeiser had never bought seeds from Monsanto, so those canola plants clearly came from somewhere else. But where?

Canola pollen can move for miles, carried by insects or the wind. Schmeiser testified that this must have been the cause, or GMO canola might have blown into his field from a passing truck. Monsanto said that this was implausible, because their tests showed that about 95 percent of Schmeiser's canola contained Monsanto's Roundup resistance gene, and it's impossible to get such high levels through stray pollen or scattered seeds. However, there's lots of confusion about these tests. Other samples, tested by other people, showed lower concentrations of Roundup resistance — but still over 50 percent of the crop.

Schmeiser had an explanation. As an experiment, he'd actually sprayed Roundup on about three acres of the field that was closest to a neighbor's Roundup Ready canola. Many plants survived the spraying, showing that they contained Monsanto's resistance gene — and when Schmeiser's hired hand harvested the field, months later, he kept seed from that part of the field and used it for planting the next year.

This convinced the judge that Schmeiser intentionally planted Roundup Ready canola. Schmeiser appealed. The Canadian Supreme Court ruled that Schmeiser had violated Monsanto's patent, but had obtained no benefit by doing so, so he didn't owe Monsanto any money. (For more details on all this, you can read the judge's decision. Schmeiser's site contains other documents.)

So why is this a myth? It's certainly true that Monsanto has been going after farmers whom the company suspects of using GMO seeds without paying royalties. And there are plenty of cases — including Schmeiser's — in which the company has overreached, engaged in raw intimidation, and made accusations that turned out not to be backed up by evidence.

But as far as I can tell, Monsanto has never sued anybody over trace amounts of GMOs that were introduced into fields simply through cross-pollination. (The company asserts, in fact, that it will pay to remove any of its GMOs from fields where they don't belong.) If you know of any case where this actually happened, please let me know.

The organic rules prohibit the "use" of genetic modification in organic agriculture. But if pollen blows from genetically modified corn into your organic cornfield and pollinates a few kernels, you aren't "using" it — at least according to the USDA's interpretation of those rules. In fact, a lot of the organic corn that's fed to organically raised chickens or pigs, does contain some level of GMOs.

That said, organic producers typically do try to minimize the presence of GMOs, because their customers don't want them. It's usually not too hard to keep contamination to a very low level. But there are crops — specifically canola and corn — in which it's extremely difficult to eliminate it entirely.

Myth 4: Before Monsanto got in the way, farmers typically saved their seeds and re-used them.

By the time Monsanto got into the seed business, most farmers in the U.S. and Europe were already relying on seed that they bought every year from older seed companies. This is especially true of corn farmers, who've been growing almost exclusively commercial hybrids for more than half a century. (If you re-plant seeds from hybrids, you get a mixture of inferior varieties.) But even soybean and cotton farmers who don't grow hybrids were moving in that direction.

This shift started with the rise of commercial seed companies, not the advent of genetic engineering. But Monsanto and GMOs certainly accelerated the trend drastically.

Myth 5: Most seeds these days are genetically modified.

Actually, surprisingly few are. Here's the full list of food crops for which you can find GMO varieties: Corn, soybeans, cotton (for oil), canola (also a source of oil), squash, and papaya. You could also include sugar beets, which aren't eaten directly, but refined into sugar. There's also GMO alfalfa, but that goes to feed animals, not for sprouts that people eat. That leaves quite a lot of your garden untouched.

GMO versions of tomatoes, potatoes, and rice have been created and approved by government regulators, but they aren't commercially available.