Accessibility links
Despite Protest, College Plans To Slaughter, Serve Farm's Beloved Oxen : The Salt A Vermont college's decision to slaughter two oxen after one suffered an injury has sparked some serious debate. The college cited sustainability as one of its reasons, but some students and animal rights advocates say it's just not right to serve Bill and Lou for dinner. 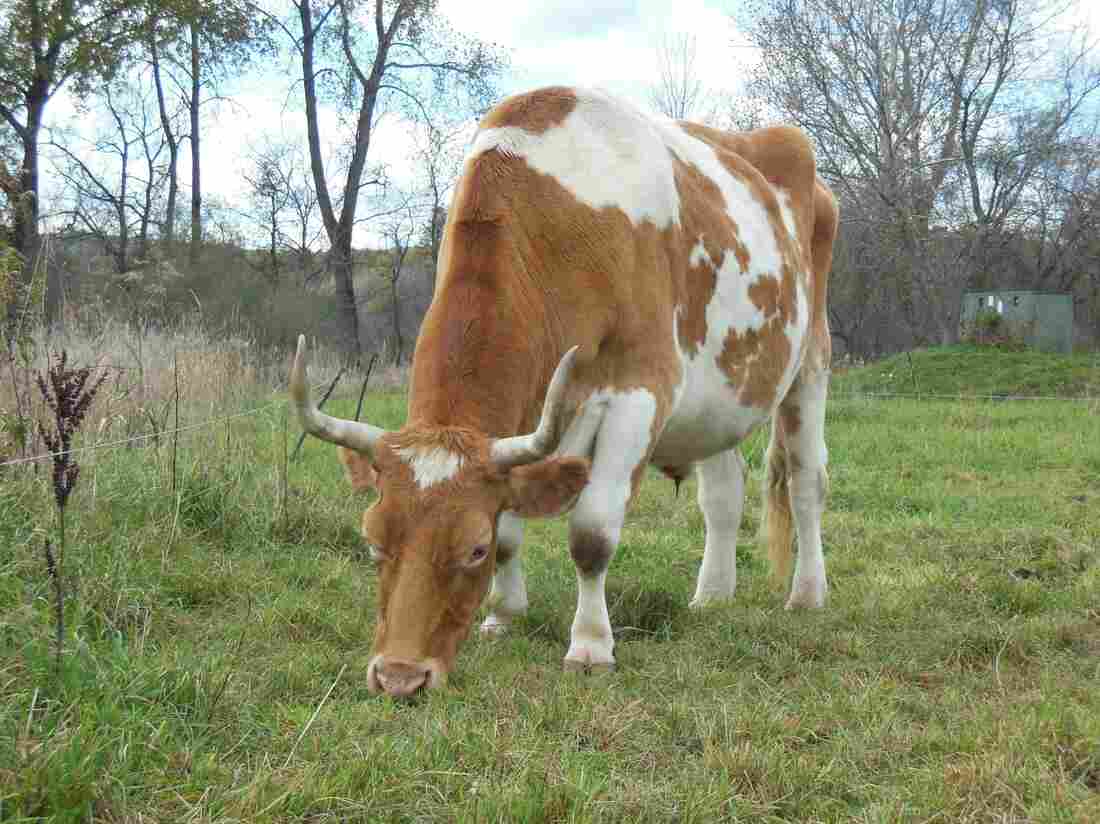 After a leg injury didn't heal well earlier this year, Lou has difficulty walking. He and his partner, Bill, will be slaughtered at the end of the month, and their meat will be used to feed students at Green Mountain College in Vermont. Nina Keck/Vermont Public Radio hide caption 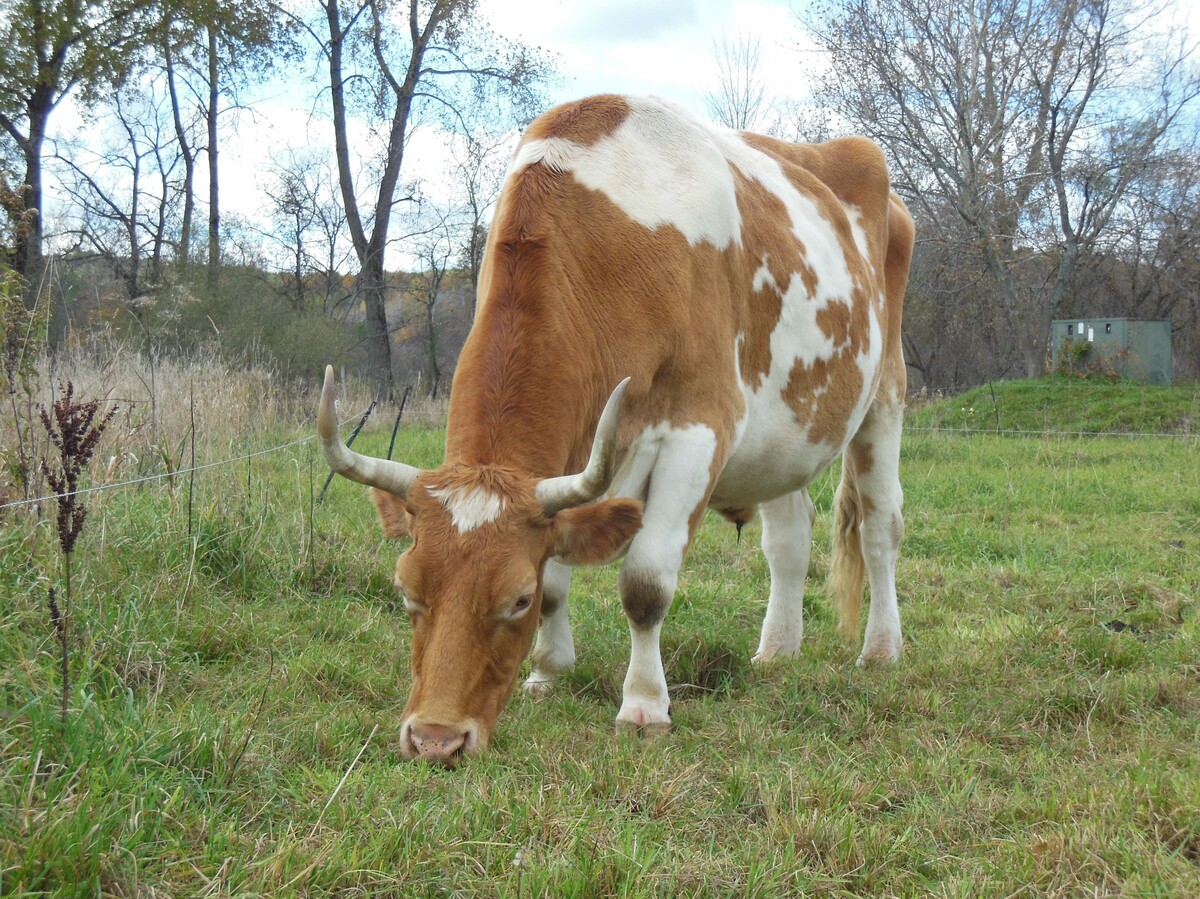 After a leg injury didn't heal well earlier this year, Lou has difficulty walking. He and his partner, Bill, will be slaughtered at the end of the month, and their meat will be used to feed students at Green Mountain College in Vermont.

If the thought of eating horse meat makes you queasy, what about strong, sturdy oxen? A small Vermont college that emphasizes sustainable living will soon slaughter two beloved campus residents: Bill and Lou, a pair of oxen. Green Mountain College plans to serve the meat from the oxen in its dining hall, but the plan has drawn international outcry and a massive Facebook petition to save the oxen.

For the last 10 years, Bill and Lou were a daily sight working the campus's Cerridwen Farm. But earlier this year, Lou stepped in a gopher hole and injured his leg. 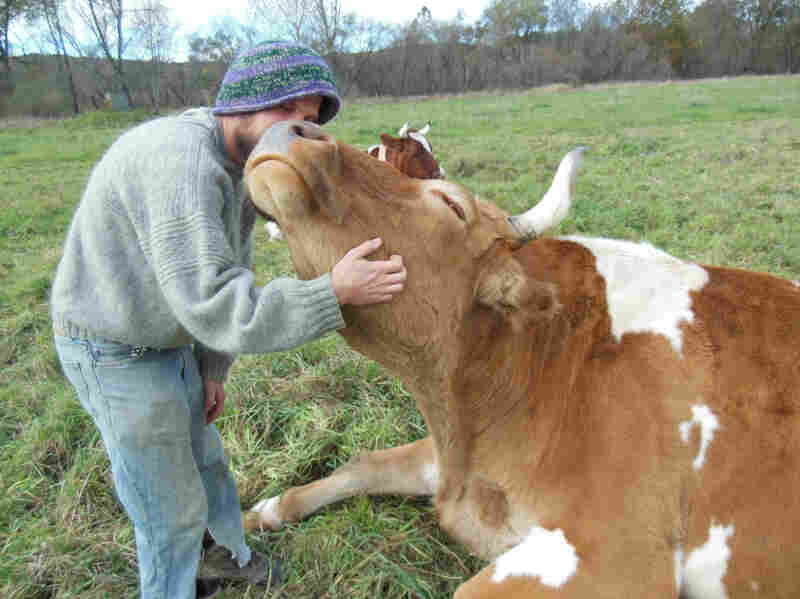 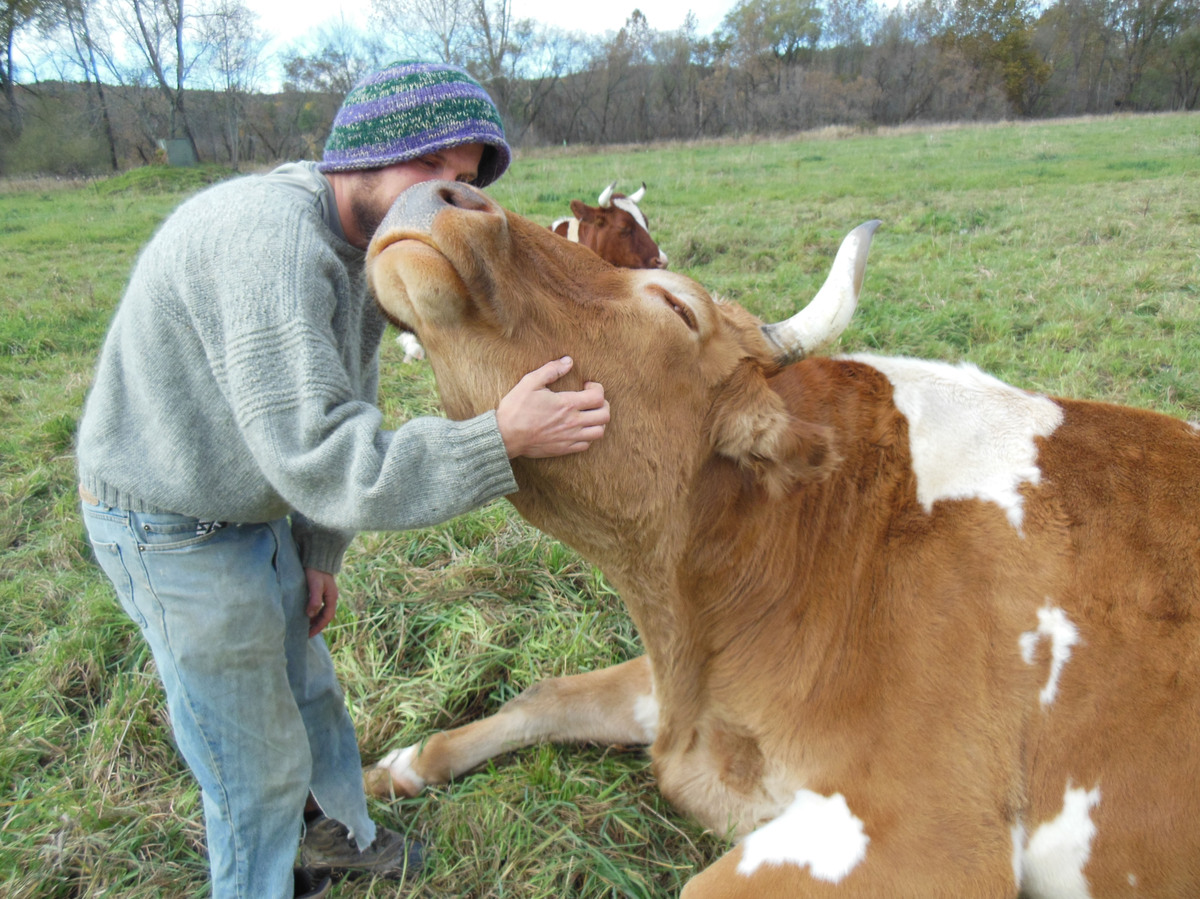 Ben Dube, a member of the farm staff and a graduate of the college, says Lou's injury hasn't gotten better. And since oxen work as a team, the 11-year-old pair was retired.

Bill stretches his head up to be scratched under his chin. "He is so beautiful, he is," says Dube.

Bill's and Lou's big brown eyes, their curving horns and gentle, but massive girth have made them minor celebrities on campus and beyond. Many say that's what makes it so hard to believe the college wants to slaughter and eat them.

"These two individuals have become veritable mascots for the school. They are the profile picture on the farm's Facebook page," says Miriam Jones, cofounder of Vine, an animal sanctuary in Springfield, Vt.

The petition to save Bill and Lou on Facebook has attracted more than 30,000 signatures from all over the world. The animal sanctuary has offered to take Bill and Lou to live there for free. Vine's Pattrice Jones says the staff was stunned when the college said no and cited sustainability as one of its reasons.

"We do not believe that the way to conserve resources is to kill the elderly and disabled to prevent them from using up resources because they're not useful anymore," Jones says. "We just ethically find that repugnant."

Philip Ackerman-Leist, head of Green Mountain College's Farm and Food project, says the issue is a lot more complicated. "We have been very clear from the beginning that this is not a petting zoo," he says. "It was going to be a sustainable farm operation."

Ackerman-Leist notes that 70 percent of students eat meat. But 12 years ago, when the college began developing its sustainable farm program, vegetarian students specifically asked that livestock be included to confront the realities of eating meat. He says this debate goes way beyond Bill and Lou, and faculty and students have spent a lot of time discussing it.

"It's something I think about a lot," says Ackerman-Leist. "I actually have 50 head of cattle at home, most of them have names and I interact with them on a daily basis. It's never an easy decision for a farmer to say it's time for an animal to go to slaughter."

Andrea Jacques, a junior who plans to study veterinary medicine, agrees with the decision to slaughter the oxen and says she's been surprised at the backlash from people off campus. "Most of the students here understand why things are the way that they are," she says.

School officials say meat from the oxen will provide the school with more than a months' worth of hamburger. Jacques says it's silly not to use it: "I don't choose to eat hamburger necessarily but if I was, this would be the one that I'd choose to eat because I know they've had a great life compared to some hamburger that you get which may not have had the best life."

She says if people think there's something wrong with that, they may want to reconsider their food choices.