Accessibility links
Beef Heart: An Unexpected Meal That Spans Generations : The Salt Beef heart, once a common dish for the poor, has been rediscovered by chefs and eaters of all ages. All Things Considered speaks with cookbook authors Jody Eddy and Christine Carroll about the stories behind their recipes. 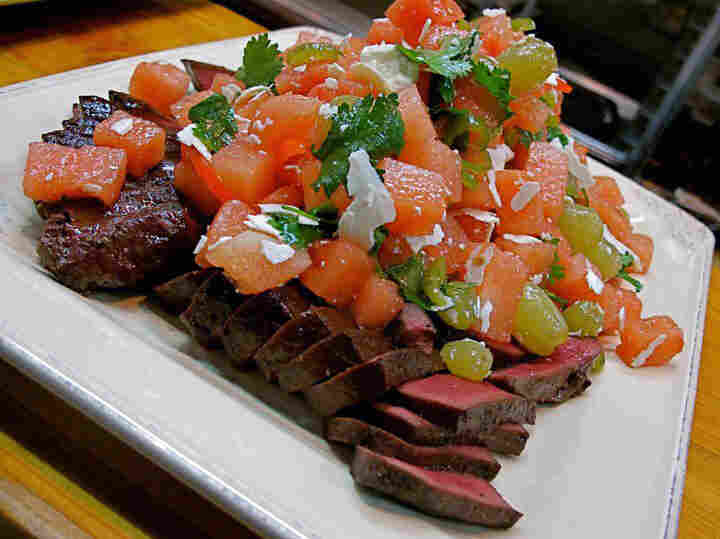 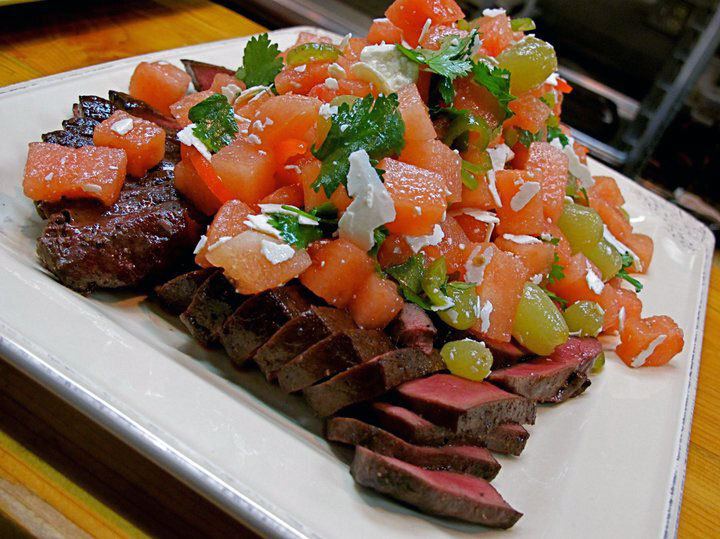 Beef heart — it's what's for dinner! Well, if you're not a vegetarian. Stick with us on this.

All Things Considered is launching a Found Recipe series Thursday, asking cookbook authors, chefs and bloggers to tell us about the dishes that surprise and delight. These are recipes stumbled upon or created by accident or by necessity.

And what better way to start than beef heart — a meat with a long history of consumption first out of necessity and now, more often, out of pleasure, at least in this country. 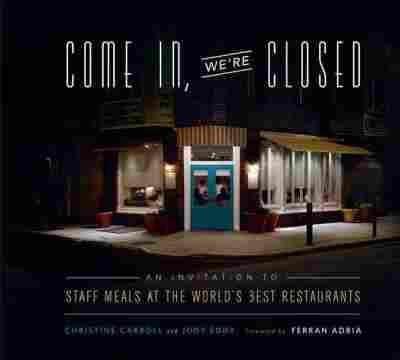 To see what all the fuss is about, we turned to cookbook authors Jody Eddy and Christine Carroll, authors of Come In, We're Closed, a book about the kind of kitchen surprises that crop up when chefs at the country's best eateries use leftovers to make meals for their staff.

Eddy and Carroll's Found Recipe comes from The Bristol, in Chicago. It's owned and operated by Chef Chris Pandel, who is a big fan of cooking cuts of meat that many modern eaters tend to avoid: offal, or organ meat.

Yes, offal practically rhymes with awful, but please keep an open mind: Eddy and Carroll swear that Chef Pandel's recipe for Beef Heart and Watermelon Salad is a revelation. "I call it steak 2.0," says Carroll "it's all the beef flavor for a fraction of the price."

The heart is trimmed into three steaks, quickly seasoned and seared in a cast iron pan, then cut into thin slices and topped with watermelon, pickled grapes, and ricotta salata cheese.

But to try beef heart at home, Carroll had to get over some of the gore. "Even for me, an ex-line cook, beef heart is chillingly anatomical," she says, adding "but you're rewarded with a marvelous protein ... which tastes deeply beefy, with the faintest of mineral high notes and a slight chew similar to hanger steak."

Blood And Guts For Halloween

After she made the salad, Carroll ended up with some leftovers, which led to another Found Recipe. Since she had a baby just starting on solids, she decided to slowly poach the beef heart in chicken stock with some garlic. "When it was completely tender, I pureed it into the most mouth-wateringly silky smooth beefy baby food you could possibly imagine." Her baby was so smitten with it that she made the puree regularly and dubbed him "Captain Beef Heart" (not to be confused with the eccentric 1960s rocker).

Meanwhile, Eddy shared this story with her Minnesota grandmother. Turns out, she ate beef heart while growing up on a dairy farm in the 1940s, as did many folks back in the day when nose-to-tail eating in the U.S. was more necessity than fashion.

Eddy prepared the heart very much like Pandel's seared beef heart at The Bristol, but she added blueberries, caramelized onions and grated horseradish, as her grandmother directed. "As we ate," Eddy says, "I thought of Christine's young son and was really heartened by the appreciation the new generation seems to have for an ingredient the matriarch of my family had known about all along."

Listen to the All Things Considered interview with Carroll and Eddy above, and see their beef heart recipes below.

Most people assume beef heart shares a level of funk and fat similar to liver, kidney or gizzard. It decidedly does not. When seared and sliced thin as it is here, it could certainly be mistaken for pricier cuts of beef, but close observation would eventually reveal its telltale characteristic: the absence of any real grain to the flesh. Selling for about $2 a pound (if you can find a farmer to haul one to the market for you), it is a thrifty stand-in for steak.

Generously season the heart steaks with salt and pepper. In a large cast-iron skillet, heat the oil over high heat. Once it is smoking, sear the steaks on one side until a golden brown crust has formed, about 3 minutes. Flip the steaks and sear for another 3 to 5 minutes, or until medium-rare (they should be bright red in the center, rimmed by about 1/4 inch of seared meat). Remove from the pan and let rest on a cutting board for 8 minutes.

Shave the ricotta salata with a vegetable peeler into strips and set aside. Combine the watermelon, grapes, cilantro, olives, and jalapenos in a large bowl. In a separate bowl, whisk together the pickling liquids and olive oil.

After the heart steaks have rested, cut them into thin, long slices and arrange on a platter. Dress the watermelon salad with half the dressing, then season with salt, pepper, and additional dressing to taste. Spoon the watermelon salad over the beef heart and top with the ricotta salata. Serve while the beef heart is still slightly warm, with fresh arugula on the side, if desired, to catch the extra juices and dressing.

A Note On Trimming A Beef Heart

To turn a fresh or completely defrosted beef heart into steaks, first trim off any large amounts of hard, white fat and veinlike ventricles visible on the outside of the heart. Leaving some fat behind is fine, as it helps lubricate the lean meat. Split the heart open (but not in two) by cutting down one side, starting from the hole on the top. Using small, quick strokes of a sharp knife, release any internal structures holding the heart together to allow it to lie flat. Once it is butterflied, two-thirds of the heart will lie flat, and one-third will stick up from the center. Using this natural delineation, cut the heart into three "steaks," all approximately the same size. Now faced with more manageable pieces, trim off any fat and ventricles, including the slightly opaque silver skin on both sides of each steak. It helps to use the sharpest, thinnest knife you own. Continue trimming until you have uncovered the smooth, shiny, dark maroon flesh that lies underneath, at which point the heart steaks are ready for the pan.

To accelerate the cure time for these unique pickles to a mere 24 hours, The Bristol calls for peeled grapes. (They use green table grapes, but any color will work as long as they are very crisp.) With no real shortcuts to quickly peel one, we can only assume this task falls to the lowest cook on the totem pole. If you find your Zen in repetitive kitchen tasks, by all means peel away, but slicing off the stem end of the grapes will work just as well (though they will require a few more days in the brine).

Scrub a 1 quart glass jar and its lid in hot soapy water. Rinse well and air-dry.

In a small pot combine the vinegars, sugar, cinnamon stick, and 1 cup water. Bring to a boil, lower the heat, and simmer until the sugar is dissolved, about 5 minutes. Remove from the heat and cool to room temperature.

Wash and dry the grapes, discarding any moldy or mushy suspects. Remove the stems and, using a small, sharp knife, cut a thin slice off the stem end to expose the flesh. Cram as many grapes as will fit snugly into the jar.

When the liquid is cool, ladle it over the grapes almost to the top of the jar, making sure to include the cinnamon stick. Screw on the lid, label the contents, and refrigerate for a minimum of 72 hours. The longer the grapes pickle, the better they taste (but the less crisp they become), and they can be stored in your refrigerator for up to 2 months.

This pickled jalapeno recipe in the "bread and butter" style — as sweet as it is sour — was invented after a summer market windfall left The Bristol with more than 200 pounds of the spicy peppers.

Scrub a 1 quart glass jar and its lid in hot soapy water. Rinse well and air-dry.

Wash and dry the jalapenos. Prick each one several times with a fork. Stuff the jar with as many peppers as you can.

In a small pot, combine the remaining ingredients with 3/4 cup water. Bring to a boil, reduce the heat, and simmer until the sugar is dissolved, about 5 minutes. Remove from the heat and carefully pour the hot liquid and spices over the jalapenos to almost the top of the jar. (A large-mouthed funnel may be useful here.)

Seal the jar tightly with the lid, label with the date of creation, and refrigerate for a minimum of 1 week. The brine becomes spicier over time and makes excellent vinegar for dressings. The peppers can be stored for up to 2 months in the refrigerator.

Storage: 2 to 3 months in the fridge.

Over high heat, bring the stock to a boil in a medium saute pan. Add the beef heart and enough cool water to submerge the pieces. Briefly return the liquid to a boil then lower the heat to maintain a gentle simmer. Add the optional garlic; cover the pan with a lid. Poach on the stove for 30 minutes or until the pieces are completely tender and easily pierced with a knife. Remove the beef heart from the stock, reserving both separately and cooling for 10 minutes.

Add the cooked beef heart, 1/2 cup of stock and a pinch of salt to a large blender or food processor. Carefully blend into a smooth puree, adding more cooled stock as necessary to achieve the desired consistency. If you accidentally overshoot on the stock and the puree becomes watery, add boiled sweet potato, overcooked pasta, or powdered brown rice cereal to thicken it again. (Reserve any remaining stock for soups, stews, or to rehydrate legumes.) And if you desire an even smoother consistency, push the puree through a fine mesh sieve discarding any lumpy solids left behind.

Decant the baby food into a clean bowl and cover the surface with plastic wrap. Once cooled to a "baby appropriate" temperature, serve in generous portions to your adventurous eater.

Extra puree can be poured into ice cube trays, covered, and stored in the freezer for up to 3 months.