Accessibility links
Oregon State's New Cheese Plant Aims To Break The Rind : The Salt Lots of big state colleges have popular campus creameries, and many focus on ice cream because it sells. But with its new cheese plant, Oregon State University hopes to produce some fancy sought-after cheeses to go with the state's famous Pinot Noirs. 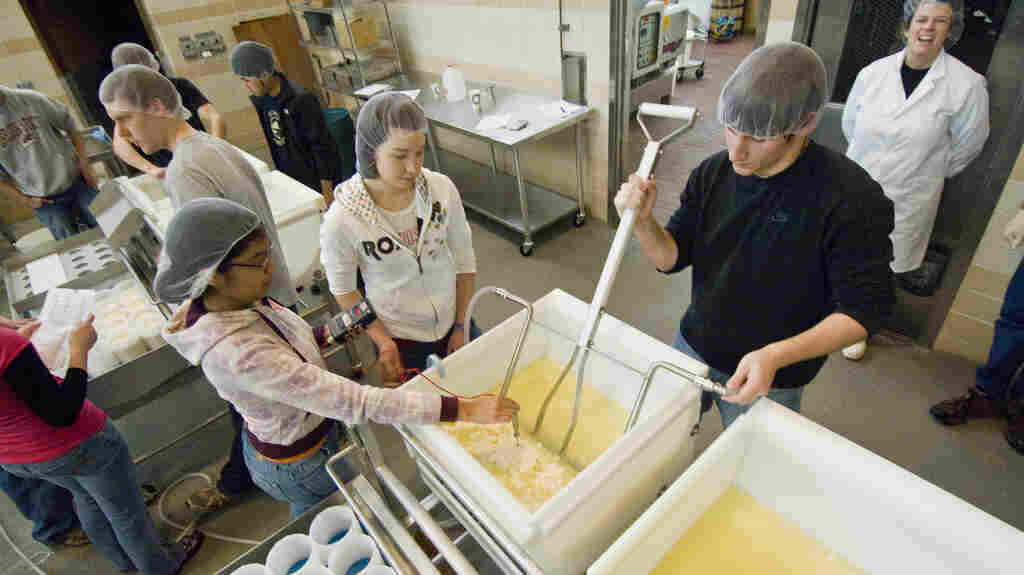 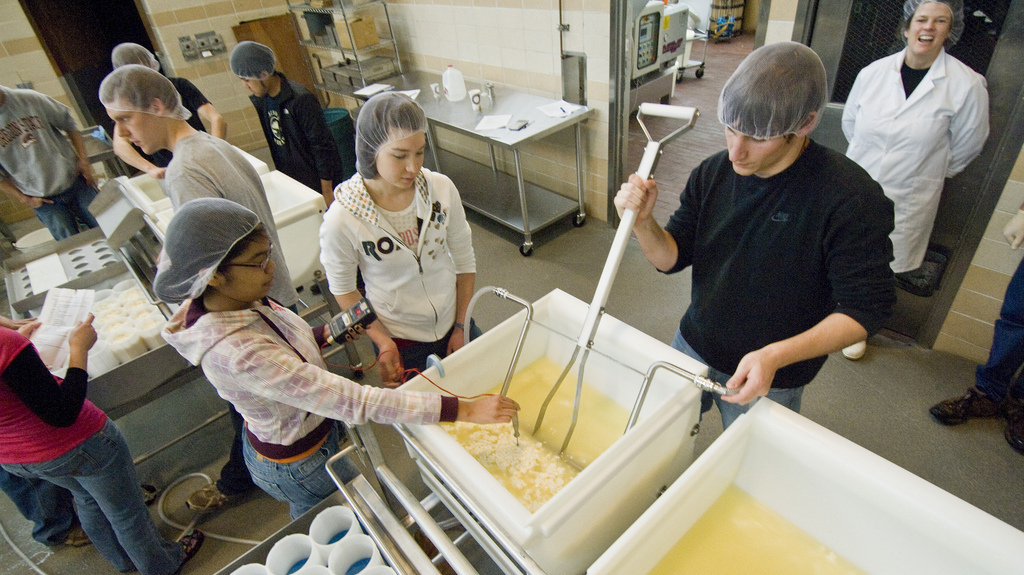 It's football season at Oregon State University, and that means tailgating, grilling, and ... cheese?

When we think of Oregon, we don't necessarily think of cheese — maybe a nice Pinot Noir, but not cheese. But this fall, Oregon State University's new cheese plant rolled out its first batch of product: a specialty alpine cheese (like Swiss, Comte or Gruyere) dubbed by the students "Beaver Classic." It's a mild cheese, with nutty flavors like caramelized onions.

OSU started online sales this week, but home football game sales of the stuff have been under way since early September. The team started winning around the same time. "I think that demonstrates the power of cheese," says Lisbeth Goddick, an extension dairy processing specialist and head of OSU's cheese program.

The college creamery is a hallmark of many land-grant universities in the U.S. It gives students hands-on experience, provides food safety and production training to state businesses, tests products and flavors, and provides the campus (students, staff and alumni) with a healthy supply of milk, cheese, butter and most importantly, ice cream.

"What you see with these different creameries in different regions of the country is that each has their own niche products. At Wisconsin and Washington it's cheese, and ours is ice cream," says Tom Palchak, manager of Penn State University's Berkey Creamery, which boasts 150 flavors of ice cream. A lot of it has to do with tradition, and some draw on food formulas developed more than 50 years ago.

"Generally the grandest product, the ones with the most following, are the ice cream products," says Jason Huck, head of Cornell University's dairy plant.

But OSU is going the gourmet cheese route.

After 30 years of closed doors, OSU's cheese plant re-opened in 2009 with a new philosophy and a unique product. "We certainly wanted to go with a specialty cheese type. We didn't want to go with a cheddar or a mozzarella," says Goddik. This meant bringing in equipment from France and Holland.

Some other universities have gone a similar route with specialty cheeses: Washington State University produces specialty cheddar in a can (called Cougar Gold™) and the University of Wisconsin at Madison makes gouda and juustolepias (a Finnish cheese) plus many commercial varieties. Huck says Cornell has developed a specialty cheddar, as well.

In addition to educating students, the goal is grow the local dairy markets, not compete with them. In OSU's case, that also means growing the local artisan cheese market, which now consists of about 20 vendors. In the cheese business, startup costs can be quite pricey, so OSU allows cheesemakers to come in and use the plant to produce their first cheeses for up to a year. "Then at least they can generate money. We've been quite successful in getting small artisan cheese companies off the ground," says Goddik. In 2003, Oregon had three artisan dairy companies. Today, the state has 25 artisan cheese companies and one artisan milk producer.

Stateside, Vermont boasts the most artisan cheesemakers per capita, while Wisconsin produces about a quarter of the country's cheese (21 percent of which is artisan-made). So will there now be some campus competition among the curds and whey? Nah, there seems to be room for everybody.

"Wisconsin has an advantage because they have so much cheesemaking knowledge in the state," says Bill Klein, who manages UW Madison's Babcock Dairy Plant. It's frequently a family business, handed down from generation to generation.

But Vermont's running strong. Jody Farnham, administrative director of the University of Vermont's Institute for Artisan Cheese (not a creamery, but a teaching facility), says, "We think this rise in artisan cheesemaking is still rising. It hasn't peaked yet."