Accessibility links
Restaurant Meals Mean More Calories And Soda For Kids And Teens : The Salt Whether you pick up some fast food or eat at a full service restaurant, eating out means eating more calories and drinking more sugary soda. For kids and teens, that has a lot of implications, especially as the country faces an obesity crisis. 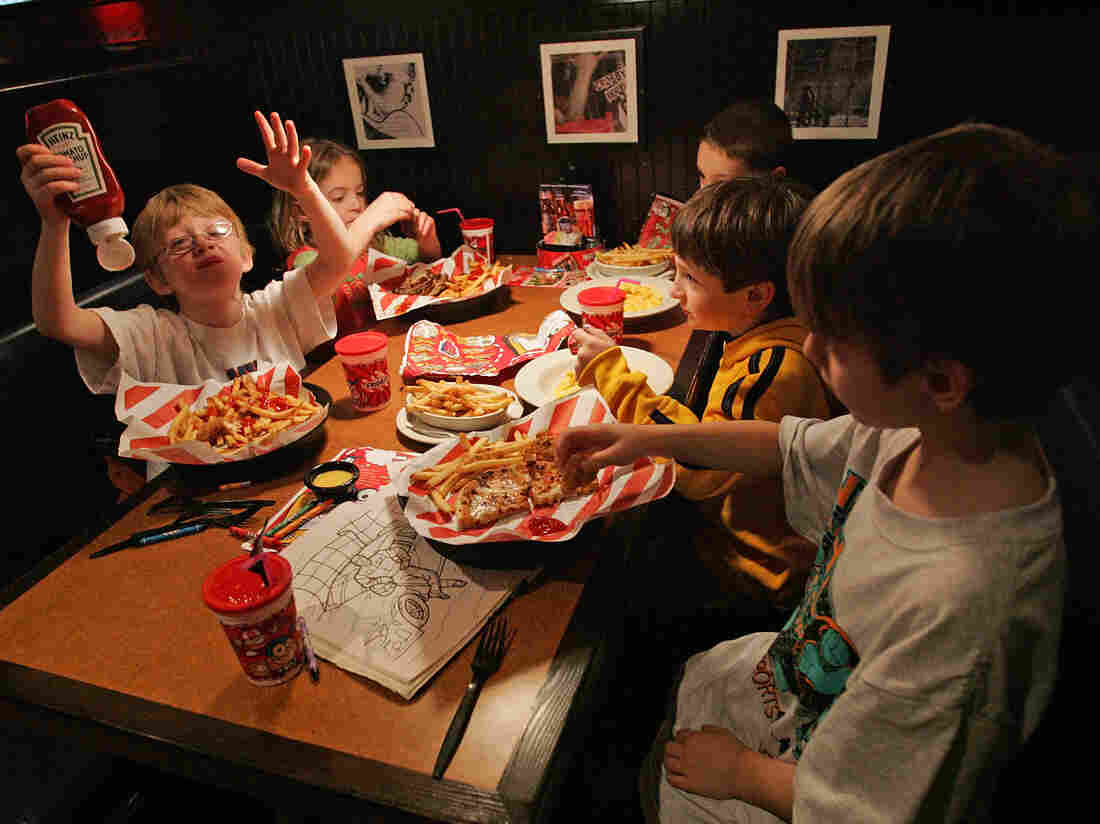 When they eat out at a restaurant, kids consume more calories than they do at home. Here, members of the Long Island Gulls hockey team enjoy a lunch at TGI Friday's back in 2007 in Marlborough, Mass. Bruce Bennett/Getty Images hide caption 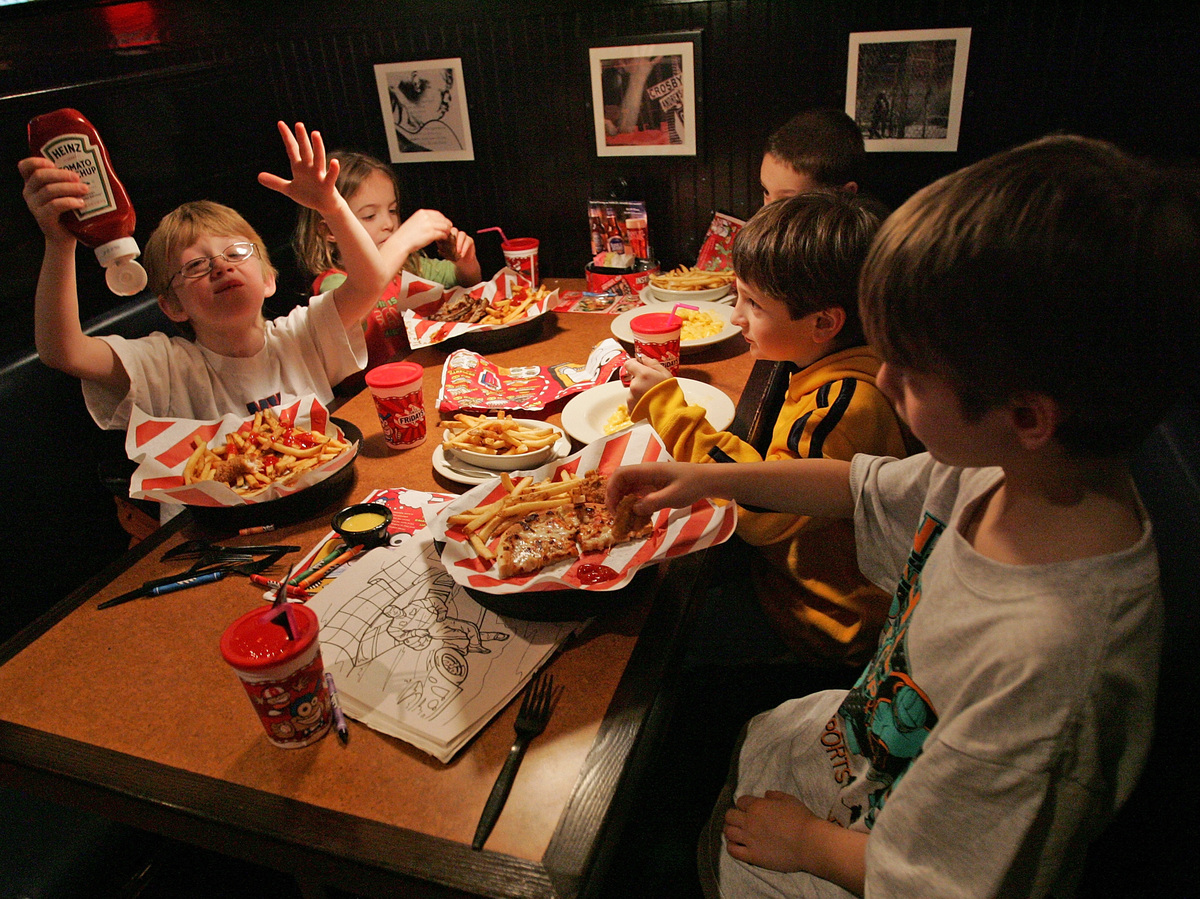 When they eat out at a restaurant, kids consume more calories than they do at home. Here, members of the Long Island Gulls hockey team enjoy a lunch at TGI Friday's back in 2007 in Marlborough, Mass.

Walk into a fast food restaurant and it's probably safe to assume that whatever deep-fried deliciousness you eat, you'll consume more calories than you would if you ate a well-rounded home cooked meal. That's common sense.

But, public health officials are sounding the alarm about the effect that eating out often – whether at fast food or full service restaurants – is having on our diets, especially in children.

And now, there's data to support the public health community's fears. Lisa Powell, a professor of health policy and administration at the University of Illinois at Chicago, and her colleague Binh T. Nguyen, also of the University of Illinois at Chicago, linked eating at both fast-food and full service restaurants to higher calorie intake. Their results were published Monday in the Archives of Pediatric and Adolescent Medicine.

The researchers analyzed data from the National Health and Nutrition Examination Survey of 4,717 children (ages 2 to 11) and 4,699 adolescents (ages 12-19) – over the course of several years.

They looked at each kid's diet on two separate days and examined a slew of factors: how much of the food they ate came from fast food joints, how much came from full-service restaurants, whether they got takeout or ate at the restaurant, energy and beverage intake, and nutrient intake (fat, saturated fat, sugar, sodium, etc.). The also accounted for food consumed at a friend's house or at school.

Teens got 309 more calories on days when they ate at fast-food restaurants, but overall children and adolescents consumed more calories on days where they ate at either full-service or fast-food establishments. Teens that ate at the fast-food restaurant also drank less milk and twice the soda on a daily basis. The daily total energy intake for those who ate at full-service restaurants were also higher, and for lower income teens and children, the adverse effects on diet only get worse.

"On days when teens are consuming fast-food they're not reducing their calorie consumption in other areas of their diet," says Powell. "They take in more sugar, more fat, more saturated fat, more sodium – that's putting them at risk for a whole host of other health risks." Namely, heart disease, diabetes, and stroke, just to name a few.

According to the Centers for Disease Control and Prevention, 37.5 percent of adults and more than one third of children and adolescents in the United States are obese.

And, we eat out a lot more than we used to years ago, when restaurant meals were an expensive treat. (According to a report released this week by NPD, we are eating out a tad less since the recession — adults ages 18 to 34 will eat out only 202 times this year, compared to 252 times in 2007 — but that's still only about about a day less each week.)

Powell blames marketing in part. "Children and youth are constantly being bombarded with the promotion of fast-food," she says. Powell notes that kids are exposed to more fast food ads on TV these days, and more fast-food restaurants can be found near high schools.

That fast-food and full-service restaurants bring the calories and increase soda intake is no surprise to folks who've been following these issues.

Sara Bleich, an assistant professor of health policy at Johns Hopkins University's Bloomberg School of Public Health in Baltimore, who is not affiliated with the research, says the study does a better job than previous ones at tracking the multiple sources of food in kids' diets, but notes the study has some limitations. For example it's a survey that requires participants to recall what they were eating — always an X factor.

"What is most notable about this paper is not its finding but rather its policy significance," she says. Bleich says it will help policymakers address obesity.

Powell says addressing the obesity issue isn't as simple as putting in place a soda ban. But she says it's a step in the right direction. "We need to change the environment," she says. "We need to work with restaurants, so that the healthy items are priced well and promoted."

Some eating establishments have made efforts to scrub their greasy reputations. McDonalds now prominently features calorie counts on its menus, and some hospitals are offering more healthy choices. This summer, Disney even started limiting junk food advertisements.

Whatever happens, warns Powell, "We don't want fast food to become the norm."