What a difference $46 million in TV ad spending can make.

At least that was the consensus in the wee hours of the morning at the Yes on Proposition 37 party, held at a performance art space in San Francisco's Mission District, even before the final votes were tallied. 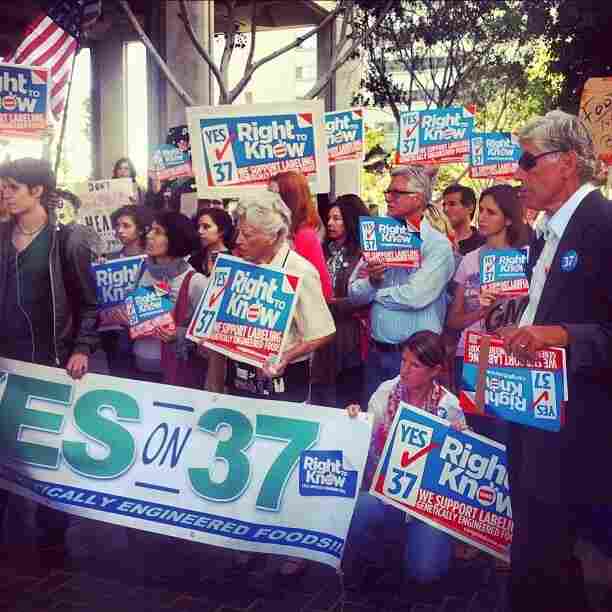 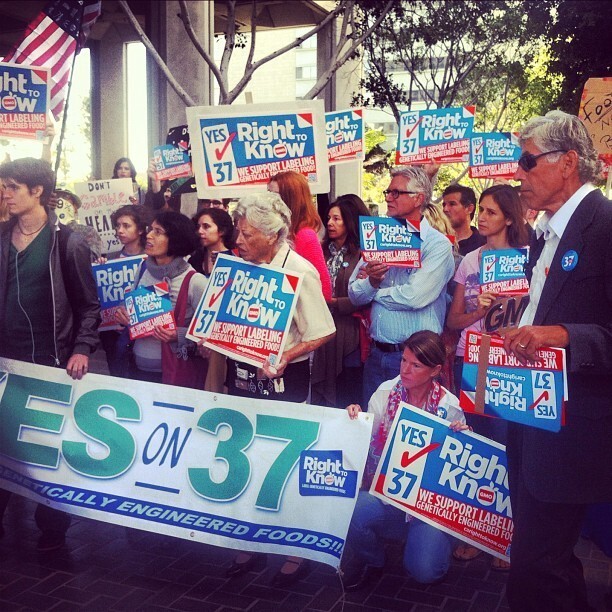 Outspent many times over, "we couldn't get up on the air," organizer Stacy Malkan told The Salt when it appeared the measure was going down. "You need a certain saturation to have an impact."

All eyes in the food world have been on California's hotly contested genetically modified (GMO) food labeling proposal, which was defeated this morning by a significant margin — 53 percent of the state's voters opposed and 47 percent in favor.

It would have required that most foods containing genetically modified ingredients carry a "Made with GMO" label on the box. Given the prevalence of genetically engineered corn and soy in processed foods, those labels would have been nearly ubiquitous in the middle aisles of the grocery store. And, given the size of California's market, and manufacturers' opposition to distribute two versions of packaging, the California law could have morphed into de facto national policy as well.

The news was well-received in the No camp, which had argued that the proposal would be expensive and confusing. "We said from the beginning that people should take a close look at 37, that it's not as simple as it seems from the surface," Kathy Fairbanks with the No on 37 campaign, which didn't hold a public party, told us last night when it appeared the measure would be defeated. "The more voters learned about 37, the more they realized they didn't like it."

But supporters were unbowed. In fact, they say, even though Proposition 37 lost, a grass-roots movement came together with a clear purpose (unlike the Occupy movement, Grist snarks) to focus on what's on our plates. "Don't mourn, #organize!" is a popular Twitter update from supporters today.

"Californians and all Americans deserve the right to know what's in their food," said Jean Halloran, director of food policy initiatives for Consumers Union, in a statement released this morning. "Unfortunately, Proposition 37 was defeated by a wildly deceptive smear campaign financed by Monsanto, DuPont and other industry opponents of the public's right to know," she said.

So about that campaign. The No on 37 camp, which opposed GMO labeling, raised $45.9 million, thanks in large part to biotech giant Monsanto, along with a familiar roster of big-supermarket brands: Kraft, Heinz, Sara Lee, Pepsico, etc. The main message? Your groceries will cost more.

Meanwhile, Yes on 37 brought in $9.4 million from a far crunchier lineup, including tiny-print soap makers Dr. Bronner's, Whole Foods and the Illinois-based nutritional supplement maker Joseph Mercola. Oh, and Hollywood: Gwyneth Paltrow single-handedly raised $80,000 for the Yes camp after endorsing the campaign on her Facebook page. Danny DeVito and Dave Matthews pitched in for a TV ad. And, said Malkan, "Sting's people were calling us last night, asking what they could do to help."

But it was too little, too late, she added. Despite an initially hefty lead by the pro-labeling folks, Proposition 37 support took a dive soon after the No on 37 ads hit the airwaves. Within two weeks, support for 37 dropped 9 percentage points, according to one poll from Pepperdine University and the California Business Roundtable.

The No camp also got a boost from a series of high-profile endorsements, including one from the American Association for the Advancement of Science, the country's largest science organization.

Proposition 37 and other labeling propositions "are not driven by evidence that GM foods are actually danger­ous," wrote the AAAS board of directors. "Indeed, the science is quite clear: Crop improvement by the modern molecular techniques of biotechnology is safe."

As we reported earlier this summer, some legal experts raised concerns about how the proposal was written and suggested that it would add confusion — not clarity — to food labels. And, several of the state's big newspapers — the Los Angeles Times, San Francisco Chronicle and San Jose Mercury News — all came out against the labeling proposal for similar reasons.