Accessibility links
Brothers' Original Fairy Tales Offer Up A Grimm Menu : The Salt Yes, the gingerbread house is still here, and so are magic winter strawberries. But this is a world where young women and small children are delicacies, too. They're fattened for roasting, sliced up for serving, and cut up into stew. 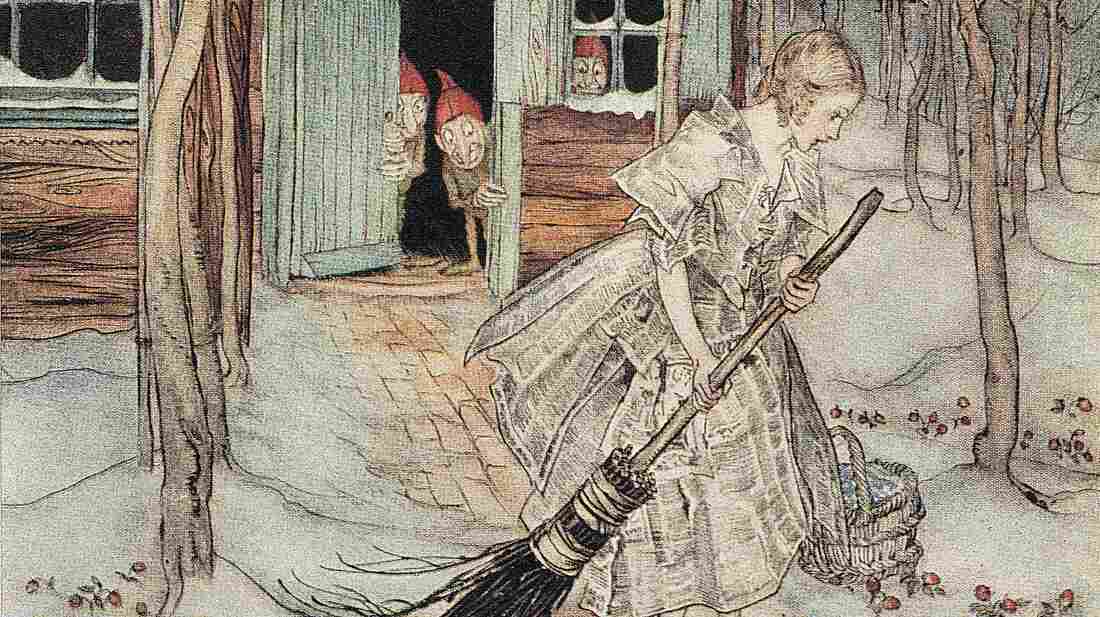 Improbably, a girl finds strawberries in the snow to feed her stepmother in The Three Little Men in the Woods. Arthur Rackham, Little Brother and Little Sister and other Tales by the Brothers Grimm hide caption

toggle caption
Arthur Rackham, Little Brother and Little Sister and other Tales by the Brothers Grimm 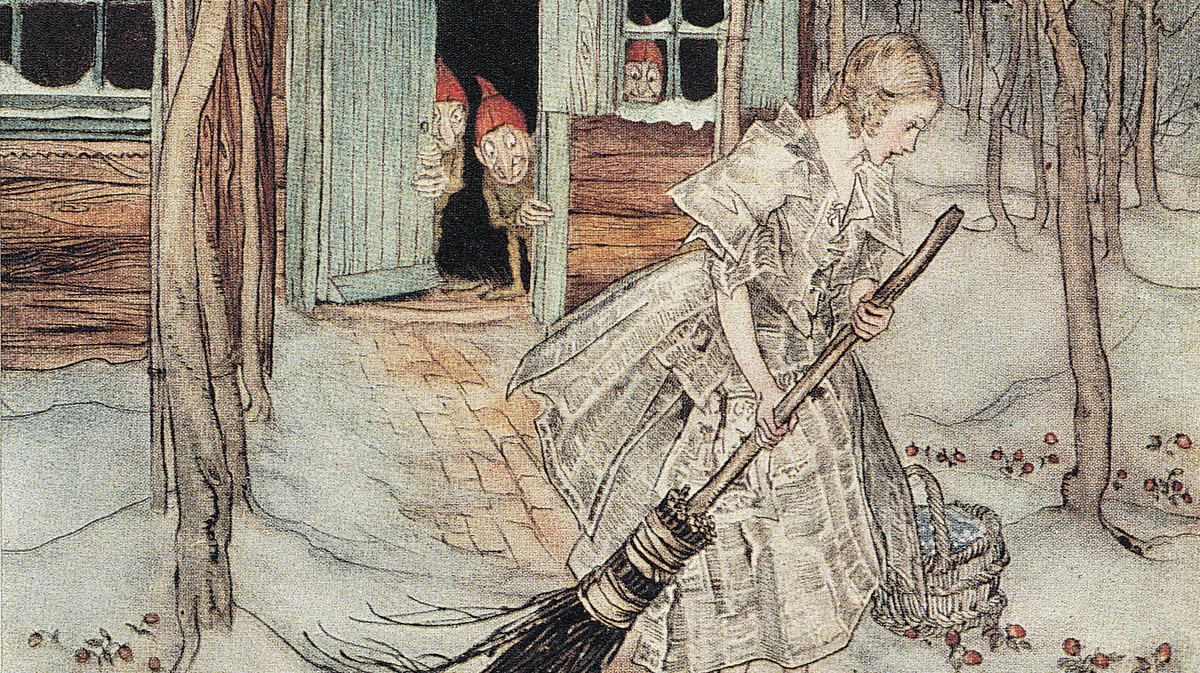 Improbably, a girl finds strawberries in the snow to feed her stepmother in The Three Little Men in the Woods.

Arthur Rackham, Little Brother and Little Sister and other Tales by the Brothers Grimm

If you've only come across fairy tales courtesy of Walt Disney, or some other sweetened retelling, the dark culinary themes in the 19th-century versions told by the two German brothers, Jacob and Wilhelm Grimm, may come as a shock.

When I started browsing through Maria Tatar's new, illustrated bicentennial edition of The Annotated Brothers Grimm, it was with the idea of reviving fond childhood memories, and whipping up a delicious little something for The Salt. (Fairy cakes, anyone?)

I went in search of Hansel and Gretel's seductive candy house, the bright green lettuce leaves that Rapunzel's mother craves, and the wild strawberries that the outcast daughter finds growing in the snow outside the door of The Three Little Men in the Woods. Brother and sister make their fateful first sighting of the witch's house made of gingerbread in Hansel and Gretel. Wanda Gag, Tales From Grimm hide caption Brother and sister make their fateful first sighting of the witch's house made of gingerbread in Hansel and Gretel.

The little house in Hansel and Gretel is as appetizing as ever, with its walls of bread, its roof of cake, and "windows of sparkling sugar." And I still wanted the children's "fine meal of milk and pancakes, with sugar, apples and nuts" for my own supper, even though I no longer have to make do with an English nursery tea of Marmite soldiers.

I discovered that the verdant salad that Rapunzel's pregnant mother finds irresistible is actually a savory herb called rapunzel or rampion; and as Tatar notes (such is the pleasure of this annotated edition) the heroine's name in the earlier Italian version of the story is Petrosinella, which is derived from the word for parsley! The French Rapunzel is Persinette.

And as for those winter strawberries "bright red in the snow," there they are, popping up beneath the bare trees in Arthur Rackham's classic illustration from his edition of the stories published in London in 1917.

What I wasn't quite prepared for was all the culinary horror that goes along with this fairy tale deliciousness. Forget about edible houses, magic apples, and winter strawberries. Young women and small children are just as likely to top the menu. Variously gulped down whole, fattened for roasting, neatly sliced for serving, or cut up into stew.

In the story "The Robber Bridegroom," the gruesome kitchen prep is the final stage of what can only be described as a gang rape. A band of drunken thieves drag home a young woman, force her to drink three full glasses of wine "one white, one red, one yellow," tear off her clothes, and finally, they "chopped her beautiful body into pieces, and sprinkled them with salt."

"The Juniper Tree" goes even further. A wicked stepmother kills her husband's young son so that their daughter will inherit everything. In order to conceal the hideous crime, she chops up the little boy's body and turns him into a pot of stew. When his father returns home, he tucks into a hearty meal. "Oh, dear wife, this stew tastes so good!" he declares. And then he demands a second helping.

And almost as bad as the prospect of becoming dinner is the prospect of having no dinner at all — many of these stories are haunted by the specter of hunger. It's famine and despair that sets the whole plot machinery of Hansel and Gretel in motion. Mothers threaten to eat or abandon their own children because there is no food. Outside of the palace or noble house, people survive on a meager diet of bread, roots and herbs with the occasional egg or apple. Step children and outcasts get dry crusts and whatever they can forage. 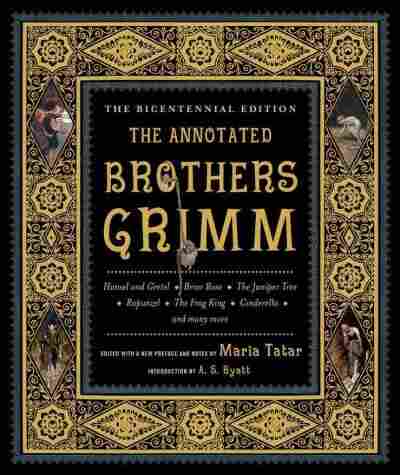 by Jacob Grimm and Wilhelm Grimm

Now, it has to be said, that once you've gotten over the shock, things often turn out better than you might expect. Despite being swallowed, sautéed, or roasted whole, the culinary victims are usually restored to life in one form or another, whether released by impromptu cesarean, or subjected to a series of beautiful and mysterious transformations into plants or animals.

The little boy in "The Juniper Tree" reappears first as a bird, who sings about the whole nasty business and then drops a millstone on the evil stepmother's head. Smoke, flames and fire rise up from the spot and when they vanish, the little brother is back.

What's really going on here, explains Tatar in an email to The Salt, is that these stories draw on the ancient and universal idea of a circle of life. "We start with myths of creation, which often feature dismemberment and reconstitution of bodies," she writes. "Fairy tales give us loss and restitution in powerful ways. Even if you suffer mutilation, there is regeneration and the promise of resurrection".

But there is no getting away from the fact, Tatar continues, that the "the tales had their origins in a culture where famine was common and life was nasty, brutish, and short. The young and vulnerable may have indeed felt at risk when there was nothing to eat, even if, as we know, cannibalism was a fairly rare phenomenon."

She points out that adults still "express their affection with phrases like 'You're good enough to eat up.' We make strange nibbling noises when we kiss babies! And so it's no wonder that fairy tales, which engage with our deepest fears and fantasies, tell us about predator/prey relationships and how to escape someone who is planning to have you for dinner."

And while the tales may seem shocking, Tatar reminds us that they were not originally meant for children. "Fairy tales were once adult entertainment, designed to help pass time and told to the rhythms of repetitive labor. To stay awake, you needed melodrama and an opera of emotions — or, to put it another way, sex and violence... Today we have the Paranormal franchise, Stephen King novels, and all kinds of other things to scare us out of our wits."

(You can hear Tatar talk in more detail about these darker issues, and the many pleasures of these stories, in a recent edition of the program On Point, from our friends at WBUR in Boston.)

It all seems a very long way from the sugar-frosted world of gingerbread houses and fairy cakes that I started out with.

But as Tatar also says, these stories remind us over and over again of the central importance and pleasure of food in our lives. "Often a great meal is the highest good in the fairy tale." She writes: "Yes, gold sparkles and shines, castles lure, and princesses await the transformative kiss, but there is almost nothing like a full stomach for those living in fairy-tale worlds. There is a lesson there for us all — I'm sure of that."

And here at The Salt, we'll drink to that!