Accessibility links
Storm-Battered Food Banks Struggle To Help The Hungry : The Salt Some charitable organizations that were in the path of Superstorm Sandy were left in as bad shape as their clients. With Thanksgiving around the corner, they wonder how they will feed the storm's victims and the poor. 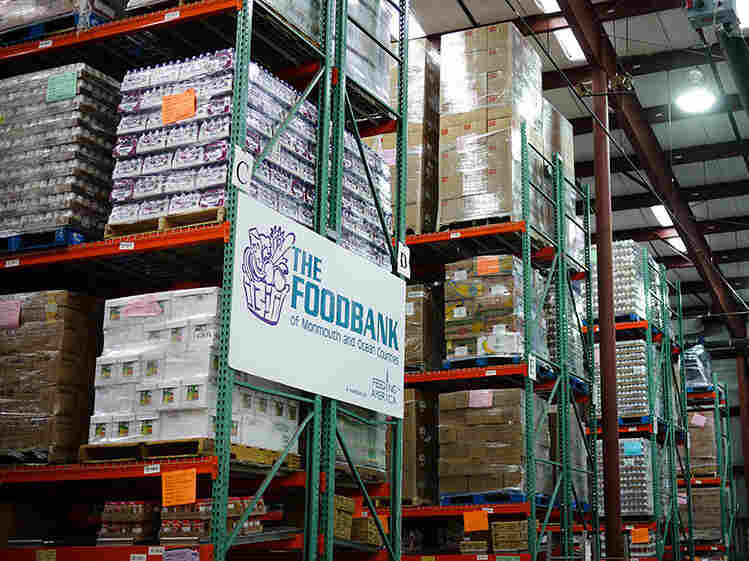 After Superstorm Sandy, the Food Bank of Monmouth and Ocean Counties in Neptune, N.J., is filled with water bottles, canned food and other goods. But these supplies are going out almost as fast as they come in. Amy Walters/NPR hide caption

Food banks in New York and New Jersey were already hard-pressed to meet the demands of families struggling with a bad economy. Add to that a natural disaster and the upcoming holidays, and they're looking at a whole new set of challenges.

Preparation did help some organizations. Five days before Superstorm Sandy hit the Jersey Shore, the Food Bank of Monmouth and Ocean Counties got its new generator up and running. Thank goodness for that, says Executive Director Carlos Rodriguez.

"Our freezer was full of turkeys. We were on generator power as soon as the power went out. And that really gave us kind of a head start," Rodriguez says. "With so many stores having lost power and having to throw away so much food, we were able to save something that, quite frankly, right now was priceless."

Priceless because he's talking about 10,000 turkeys the food bank had stored up for Thanksgiving. In normal times, this food bank helps feed 1 in 10 people in these two central New Jersey counties. That's about 127,000 people.

The long-term impact is a great unknown. Thousands of people were washed out of their homes — some temporarily, but others forever. Many lost jobs and businesses.

Right now, the food bank is stuffed to the gills with pallets of water bottles, canned food, bread, peanut butter and ready-to-eat meals. But supplies are going out almost as quickly as they come in. Rodriguez says since the storm, they've distributed about 575,000 pounds of food, twice the usual volume.

Some of that food was sent to the coastal town of Sea Bright, located on a barrier island near the northern end of the Jersey Shore. The roads on the narrow strip of land are still lined with debris. Backhoes are trying to push tons of sand that covered the town last week back onto the beach.

With cleanup in full swing, the National Guard set up tents and a makeshift cafeteria for returning residents and those helping them out. Among them is 82-year-old William Glennon, wearing a frayed shirt and mud-splattered jeans. He's taking a break from working on the storm-damaged beach house that's been in his family since the 1930s.

Lunch consists of a chicken salad appetizer, beans, a hot dog, macaroni and cheese and an apple. "It's delicious," says Glennon.

This makeshift feeding site is expected to be around for two more weeks. But Rodriguez is worried about who will fill the void once emergency help is gone.

A little farther up the coast, in grittier Keansburg, Sandy pushed the waters of the Raritan Bay right through town, leaving many buildings flooded and filled with muck. 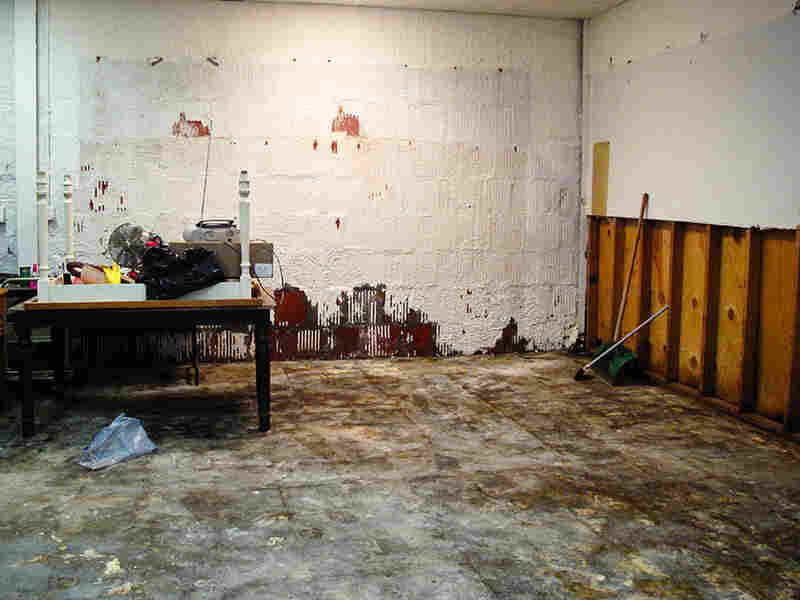 Clothes, food, even the floors and wall boards at Project PAUL, in Keansburg, N.J., were destroyed when the storm flooded the town. Pam Fessler/NPR hide caption 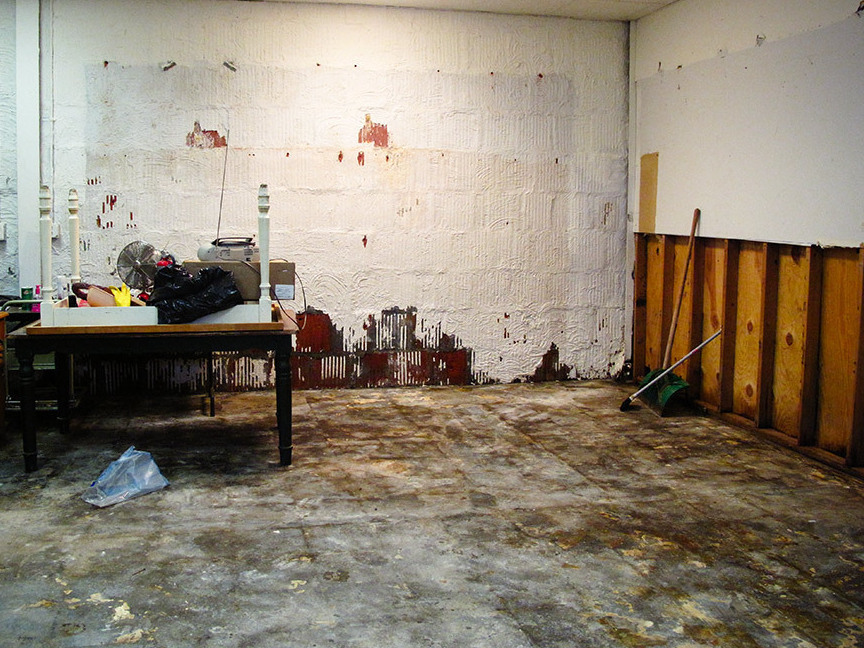 Clothes, food, even the floors and wall boards at Project PAUL, in Keansburg, N.J., were destroyed when the storm flooded the town.

There, Sal Cortale greets Rodriquez outside Project PAUL — an acronym for the poor, alienated, unemployed and lonely. It's one of 260 anti-poverty programs that work with the Food Bank. But now, Project PAUL is in as bad shape as many of its clients.

Cortale opens the door to what used to be a thrift shop. The floors and wall boards have been ripped out, leaving an empty shell. The program lost everything — all the clothes and food collected for the needy.

"What we do here is basically a FEMA, 365 days a year," Cortale says, referring to the Federal Emergency Management Agency.

Project PAUL hands out hundreds of bags of free groceries each week and offers other social services, but all that's stopped since the storm. Cortale and Rodriquez are now worried about how to provide the Thanksgiving dinners that those who come here depend on.

"The whole building would have been full with donations for Thanksgiving," Cortale says. "But now if we get turkeys in from various places, there's no freezer to put them here."

"Should we bring a truck here and park here with as many turkeys?" Rodriguez suggests.

The two men think they can probably work something out. They know that this year, the lines will be longer than usual.