Accessibility links
Beer, Wine And Spirits: When Counting Our Liquid Calories, Are We Honest? : The Salt Despite the perception that Americans are a bunch of boozers, a new study shows men in their 20s and 30s take in about 175 calories a day in alcohol; for women, it's about 60 calories. Still, the government warns, it's a little more than we should be imbibing on a daily basis. 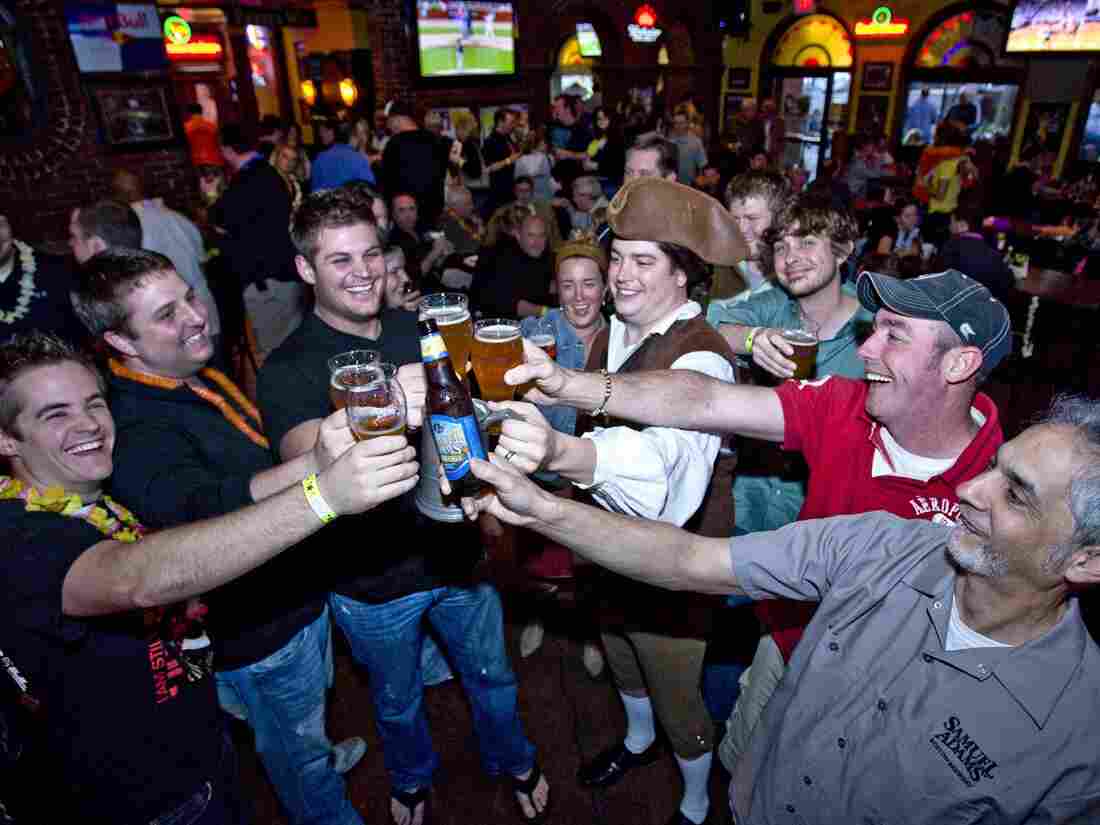 Not surprisingly, men like these guys cheering Sam Adams love beer. But more women than you might expect do too, according to a new study. Sarah Conard/AP hide caption 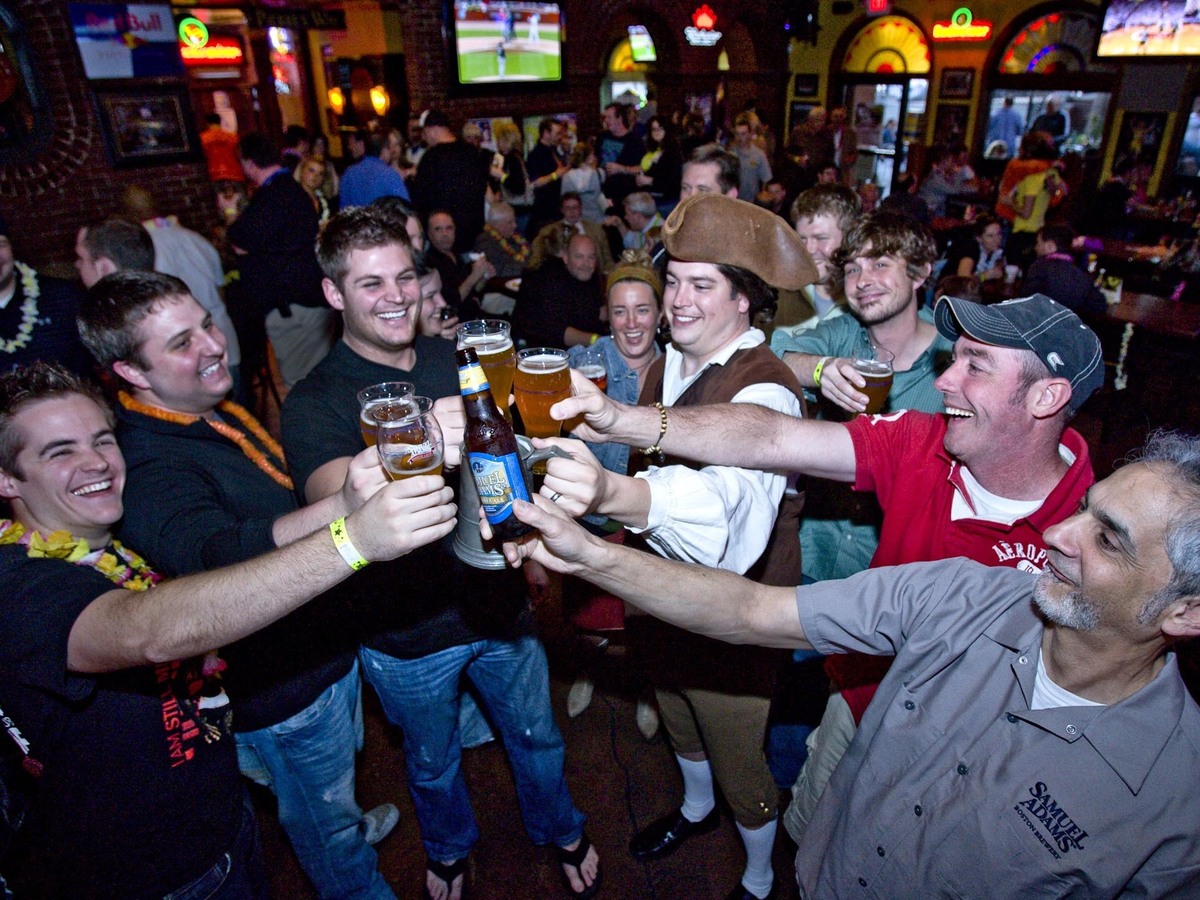 Not surprisingly, men like these guys cheering Sam Adams love beer. But more women than you might expect do too, according to a new study.

When it comes to tallying our liquid calories, we're not always so accurate. Does that tiny 5-ounce serving of wine really count as a glass of wine? (The answer is yes.)

So as the season of celebrations heats up, and holiday cheer is delivered in the form of bubbly, beer or booze, just how many calories are we consuming from alcohol on a random Tuesday night?

Almost as much as we get from soda, apparently — an average of about 100 calories a day. That may not sound like a lot, but it can add up.

A new Centers for Disease Control and Prevention analysis provides some more insights into the nation's drinking habits.

If you're a guy in your 20s or 30s, the average intake is about 175 calories per day from alcoholic beverages. That's the equivalent of about two light beers.

And for women, the average is lower, at about 60 calories per day. So, spread over a week, we're talking 420 calories, or about four glasses of wine. Women in their 40s and 50s tend to drink a tiny bit less, about five calories fewer per week.

And what are our favorite drinks? Perhaps, not surprisingly, beer reigns with men; guys drink three times more beer than wine.

But here's a surprise: Ladies seem to be equally partial to beer, wine and spirits. Yes, women are consuming about as many calories from hard liquor cocktails and beer as they are from wine. Could it be the Skinny Girl Margarita effect? Or is the growing craft beer movement bringing in the ladies?

And, interestingly, the big drinkers seem to be outliers. Only 20 percent of men and 6 percent of women are drinking 300 calories or more from alcoholic beverages daily.

This analysis comes from a new CDC report based on findings from a large, national health and nutrition survey.

Another interesting finding: There appear to be more teetotalers and occasional drinkers than many people realize. On any given day in the U.S., about one-third of men and 18 percent of women drink an alcoholic beverage. This means far more people are abstaining, on a typical day, than imbibing.

These numbers may seem low, but they're similar to the findings of the NPD Group's National Eating Trends survey. "We show that 27 percent of adults over 21 years old report having an alcoholic beverage at least once in a two-week period during the year ending May 2012," says Harry Balzer of NPD Group. And he says for each of the 10 years before, the number hovered between 27 percent and 30 percent.

"I think the most interesting thing for the general public to think about is one 12-ounce beer has, on average 150 calories; the same as one 12-ounce can of soda," Samara Joy Nielsen, a senior fellow at the CDC's National Center for Health Statistics, tells us in an email.

Alcohol, according to her findings, accounts for about 16 percent of an adult's total caloric intake. That's about the same percentage that kids get from sugar.

The Dietary Guidelines for Americans recommend that just 5 percent to 15 percent of calories come from added sugars and fats. And as the researchers point out, since alcohol is considered part of this added sugar/fat category, the percentage of total calories from alcohol is slightly above the recommended level.

Now, it's important to point out that these caloric estimates of alcohol are based on self-reported surveys, and it's possible that people are "underestimating by a lot," says Madelyn Fernstrom of the University of Pittsburgh. "People also don't count their drinks correctly." She says a 5 ounce-serving of wine may not look like much, so when you fill your glass to the top, you may have consumed closer to what's considered two glasses of wine.

The National Health and Nutrition Examination Survey is conducted by asking thousands of participants, representing a cross-section of Americans, about everything they've consumed in the past 24 hours. As Nielsen explains, "participants report all the foods and beverages they have eaten from midnight to midnight the previous day."