Accessibility links
Why Americans Go Crazy For Pumpkin And Pumpkin-Flavored Stuff : The Salt With pumpkin or pumpkin spices going into more products every year, we wondered, what's the deal with the pumpkin obsession? Turns out pumpkins have been a symbol of Americans' longing for simpler, rural times since we began moving to the cities in the 19th century. And marketers know it. 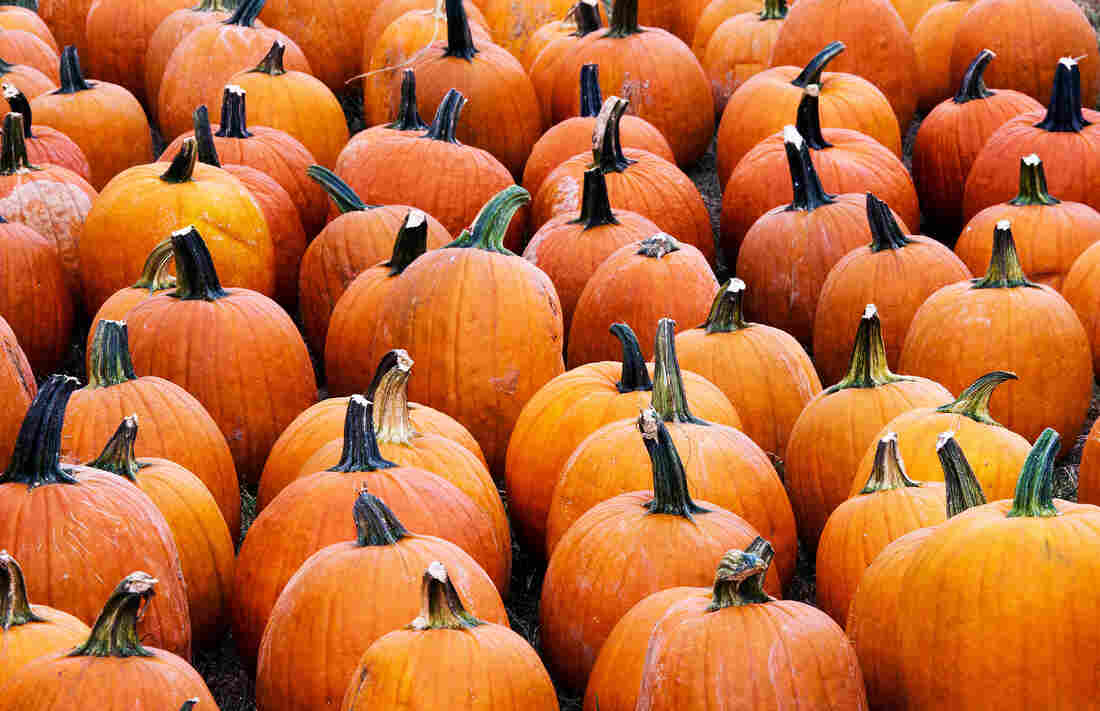 Pumpkins for sale at the Mt. Rogers Pumpkin Patch in the a parking lot in Centreville, Va. Paul J. Richards/Getty hide caption 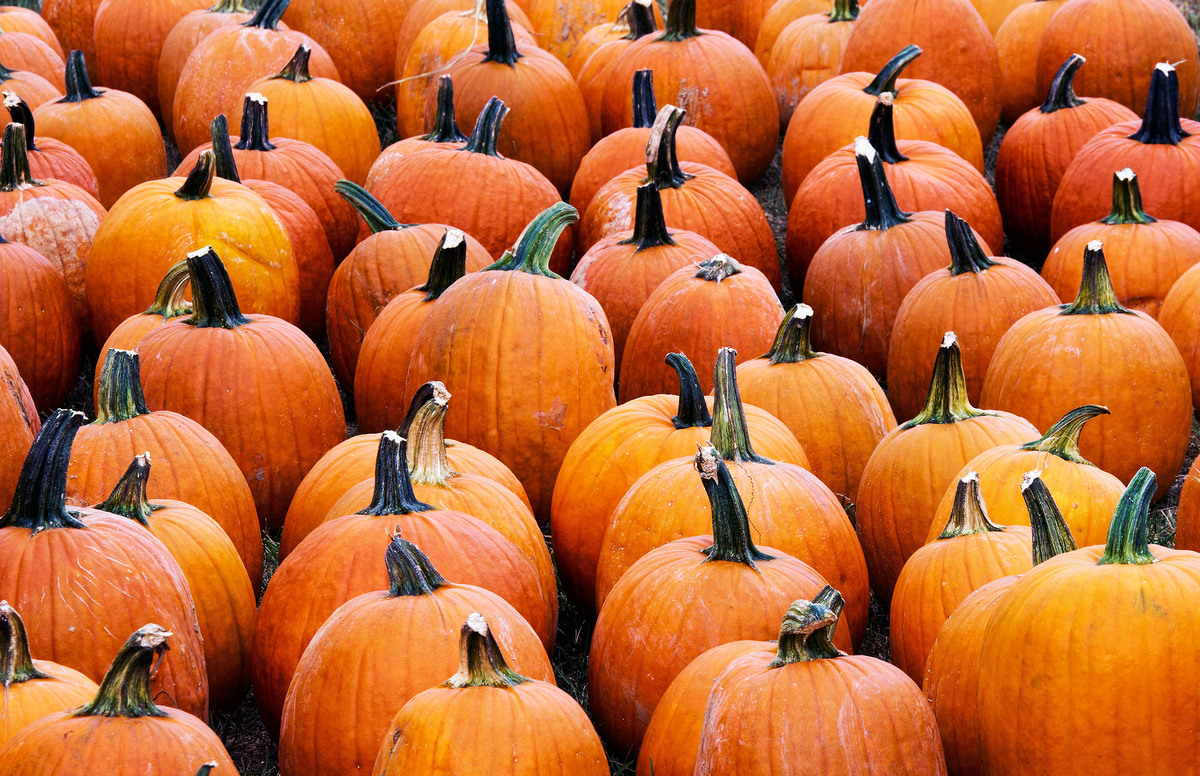 Pumpkins for sale at the Mt. Rogers Pumpkin Patch in the a parking lot in Centreville, Va.

At Thanksgiving, many of us will dig into the pointy tip of our first piece of pumpkin pie for the season. However, this Thursday, that nostalgic moment might feel a little less special.

This year, the word "pumpkin" seems to be creeping its way into hundreds of foods, drinks, and other products. As The Huffington Post noted recently, you can now find pumpkin-inspired beers, teas, marshmallows, soy milk, Pop-Tarts, and Pringles.

But what has spurred this explosion in marketing a big orange squash?

It's more about the pumpkin feeling than the pumpkin flavor or nutrition, says Cindy Ott, professor of American Studies at St. Louis University and author of the recent book Pumpkin: The Curious History of an American Icon.

She started looking into pumpkins when she was helping a friend, who is a pumpkin farmer. "I started asking, 'What's going on? Why are these people driving 30 miles or so from their homes to buy this vegetable that they don't even eat?,'" she says.

Ott says that pumpkins and some other types of squash are "botanically indistinguishable," but the image of a round orange pumpkin is a nostalgic draw. "It's a vegetable that represents this idyllic farm life, and the best sort of moral virtue. And Americans have become attached to that," she says.

And though pumpkin beers and pumpkin breads have been produced since colonial times, Ott says that they weren't always the specialty foods that they are today. "Pumpkin beer was used when there was no barley. [If] there was no wheat for bread, they used pumpkin [for] bread," she says. "Pumpkin was considered food of desperate [times]."

The rehab of pumpkin's popularity began when 19th century Americans began to move away from rural life and into the city, Ott says. "People became stressed about... moving into the office and off the farms, and [the pumpkin] starts to appear in poems and in paintings," she says. "We're celebrating the nostalgia for this old fashioned, rural way of life, that no one ever really wanted to stay on, but everyone's always been romantic about." 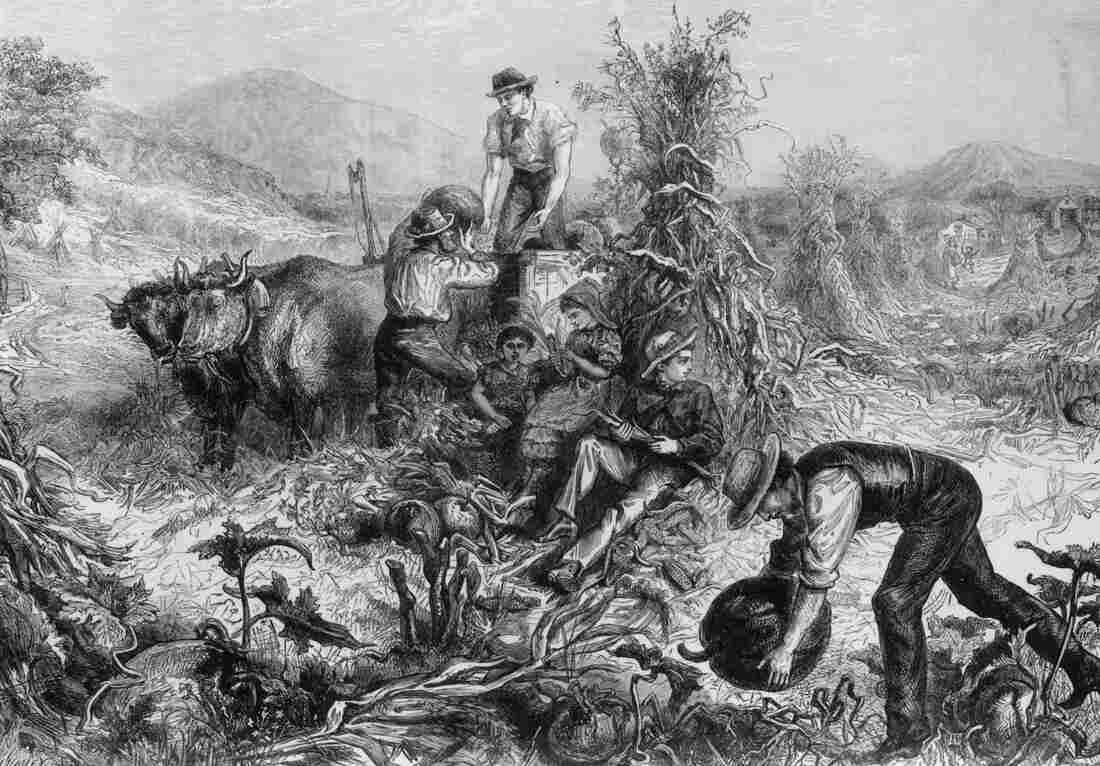 Nowadays, a real pumpkin isn't even necessary to elicit these old-timey feelings. Many modern pumpkin and pumpkin spice products like beers, cookies and chocolates don't contain any actual pumpkin.

Even last month's uproar over the shortage of Starbucks' iconic pumpkin spice latte was associated with the orange vegetable in name only. The Wall Street Journal reported that the coffee chain's seasonal beverage contains no real pumpkin; a Starbucks spokeswoman said it "contains a natural and artificial pumpkin spice flavor."

While commercialization of the pumpkin seems to have reached unprecedented levels, Ott says that this popularity doesn't just benefit the large companies who are jumping on the pumpkin bandwagon.

And that's actually helping to rejuvenate those farms, Ott says.