Accessibility links
At Burmese Dissident's Cafe, A Taste Of Politics And Salad : The Salt Myat Thu's restaurant on the Thai side of the border with Myanmar specializes in Burmese salads. Thu has been cautiously watching Myanmar's political change, hoping to go home one day.

Early in life, Myat Thu knew that his destiny as a cook lay in salads. Not the light, leafy green salads that are so common in American restaurants, but heavy, hearty Burmese salads.

Myat Thu grew up in Burma, also known as Myanmar. He was just 14 when his mother placed him in charge of making dinner. Unsure of what to prepare, he studied the salad vendors on the streets of Rangoon.

The women would lay out the ingredients on the cart in front of him — cabbage, sprouts, peanuts, garlic, shallots, green chilies. He'd watch as the women would chop and toss everything together, drizzle in lime or fish sauce or sesame oil. "I learn from them, mostly," he says.

As a university student, Myat Thu's attention turned to political activism. He was part of the 1988 nationwide protests that were brutally crushed by the Burmese military. Two years later he was forced to flee the country on foot for Thailand. 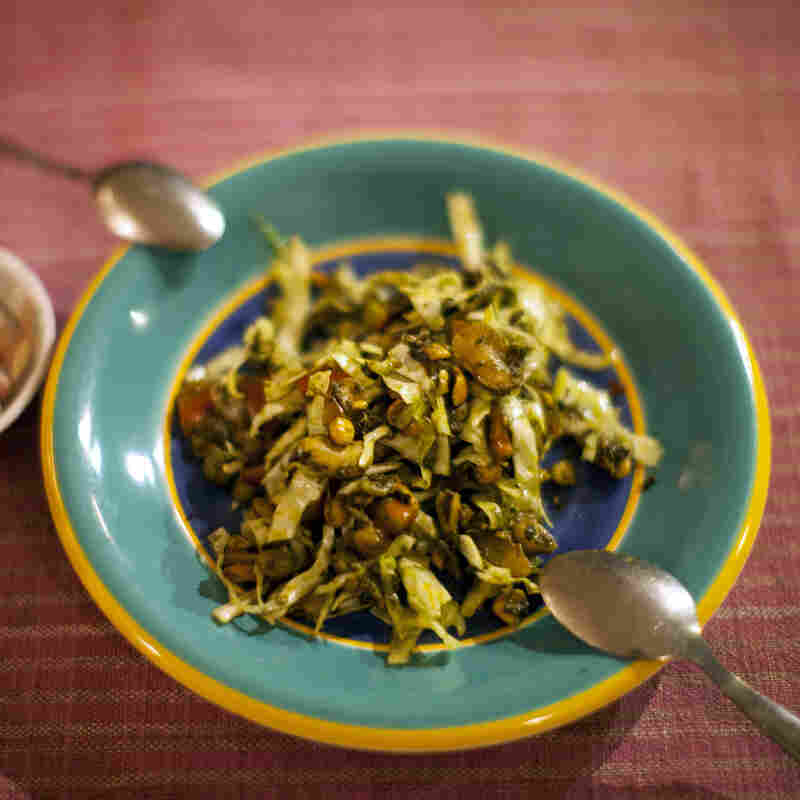 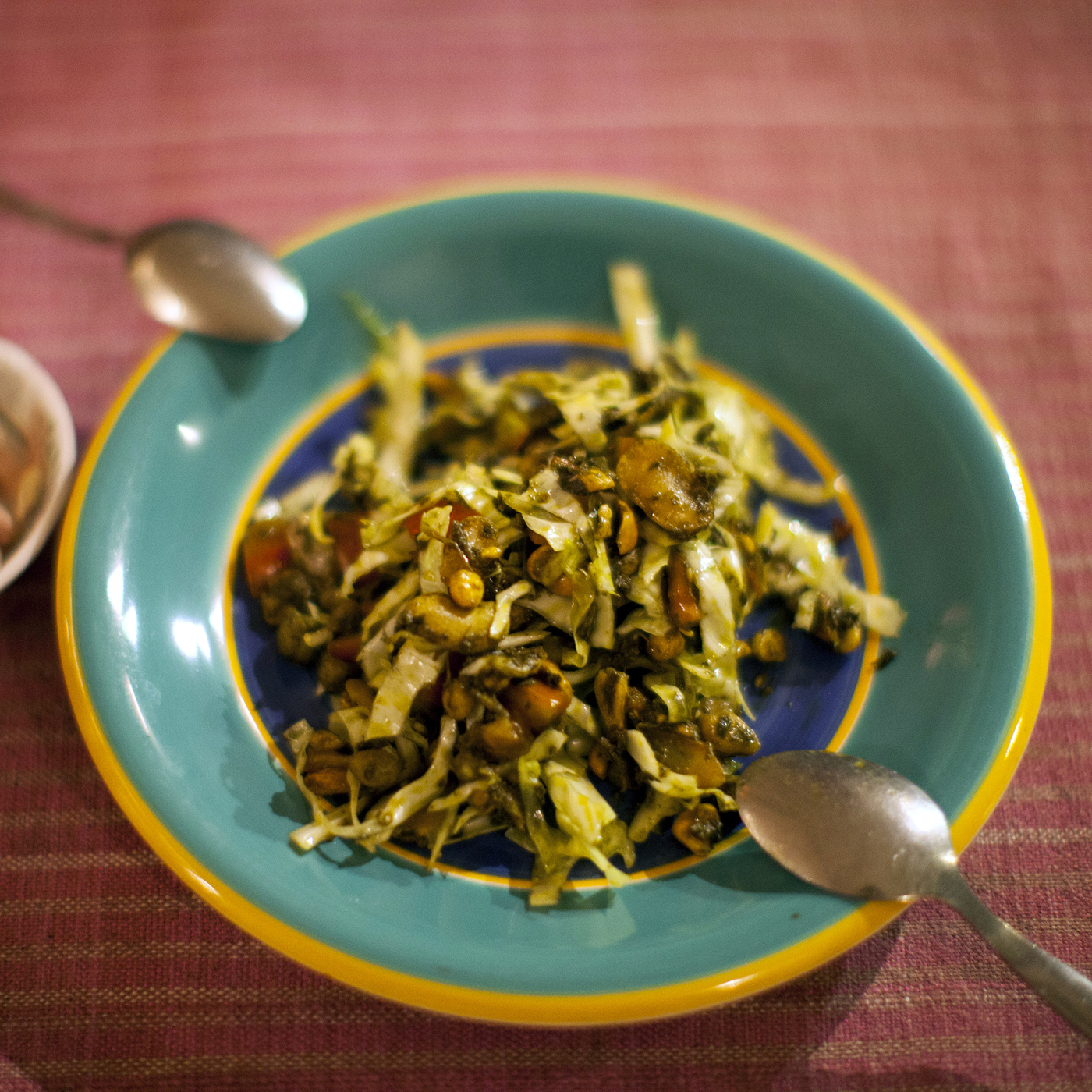 One of the restaurant's most popular dishes is the Burmese green tea leaf salad with crunchy fried nuts.

Initially, he joined other Burmese exiles and activists in Bangkok but eventually decided to move to Mae Sot, a small city on the Thai side of the border. And eventually he opened his restaurant, Aiya.

The menu includes Indian curries and Thai noodles, but his marquee items are fresh Burmese salads.

One of the most popular is a green tea leaf salad topped with crunchy fried soy nuts. There's a green mango salad with chili. The ginger salad is a blend of shredded cabbage and raw ginger tinged with lime and garlic. The aubergene salad is warm chunks of tender, smoked eggplant mixed with crisp slivers of onion.

He says the key to the perfect salad is balance. The amount of onion must be just right. The ratio of cabbage to ginger has to be exact.

"The portion [of each ingredient] that you use is important," he says. "That's what makes the difference between people who make good salads and bad salads."

His restaurant, however, is about more than just creating the perfect salad. Aiya is the work of a revolutionary. Portraits of Che Guevara and Aung San Suu Kyi look down from the balcony. Paintings of Burmese street scenes line the walls. Bumper stickers declare "Peace in Burma Now."

Last year, elections in Myanmar put an end to five decades of oppressive military rule in the resource-rich nation. The U.S. has sent in an ambassador. President Obama is even paying the former pariah state a visit, a move that would have been unthinkable just two years ago.

Myat Thu has been cautiously watching the recent, rapid, political reforms in his homeland. But he says he still doesn't trust the government there.

"I hope this is not a game that the regime has been playing," he says. 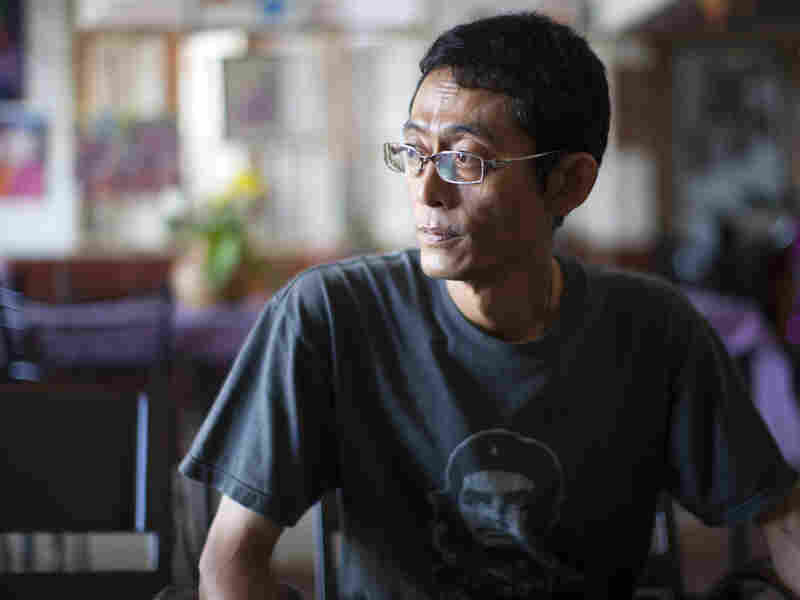 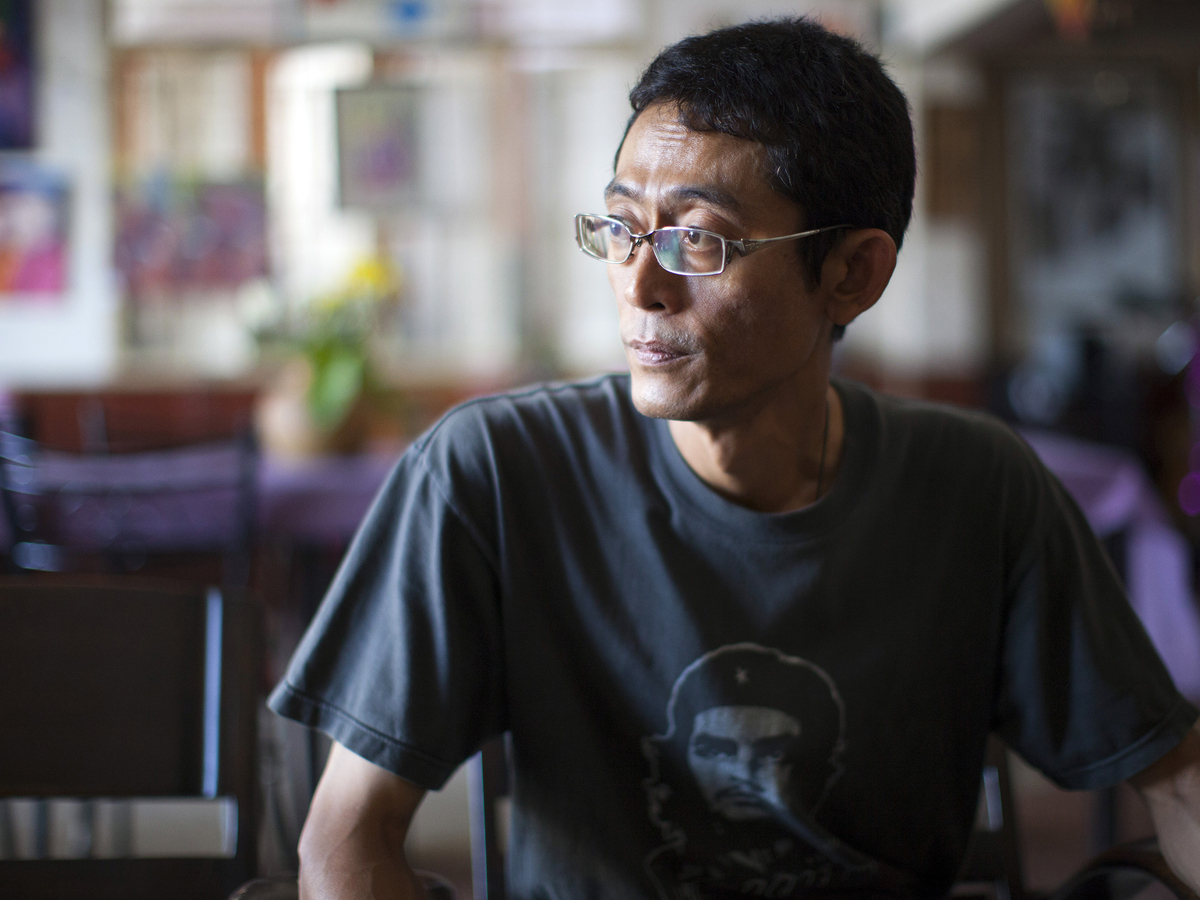 And he worries that it could be dangerous for longtime critics of the government like himself to return, "because there are still a lot of political prisoners in different prisons inside Burma."

He follows the political changes in Myanmar closely. He sees the restaurant as a kind of a dissident's salon, a Burmese Bohemia, a place where the opposition in exile can gather.

And they do. On a Friday night, Aiya bustles with life. The restaurant has become popular with Western expatriates as well as Burmese exiles.

In front of the bar, a Burmese folk singer with long, gray hair is strumming out Bob Dylan's "Blowin' in the Wind."

Patrons share big green bottles of Chang beer. Waiters dressed in T-shirts and jeans shuttle small plates of curries and salads out of the kitchen.

Myat Thu mingles with the diners. He shakes a percussive rattle behind the folk singer. He opines about the regime next door in Rangoon. And he flits in and out of the kitchen. "When you cook and people enjoy your food," he says, "you are very happy."

Myat Thu has built a life in Thailand. His wife is Thai, and he brags that her best dish is a rich curried chicken in peanut sauce called panang. But ultimately Myat Thu still yearns for home. "I hope one day," he says, "I will run a restaurant in Rangoon."