Accessibility links
Why Greek Yogurt Makers Want Whey To Go Away : The Salt That extra-thick, rich taste of Greek yogurt is popular, but you get it by creating lots of waste. For every pound of authentic strained Greek yogurt, there are 2 or 3 pounds of liquid whey. And getting rid of it can be expensive. 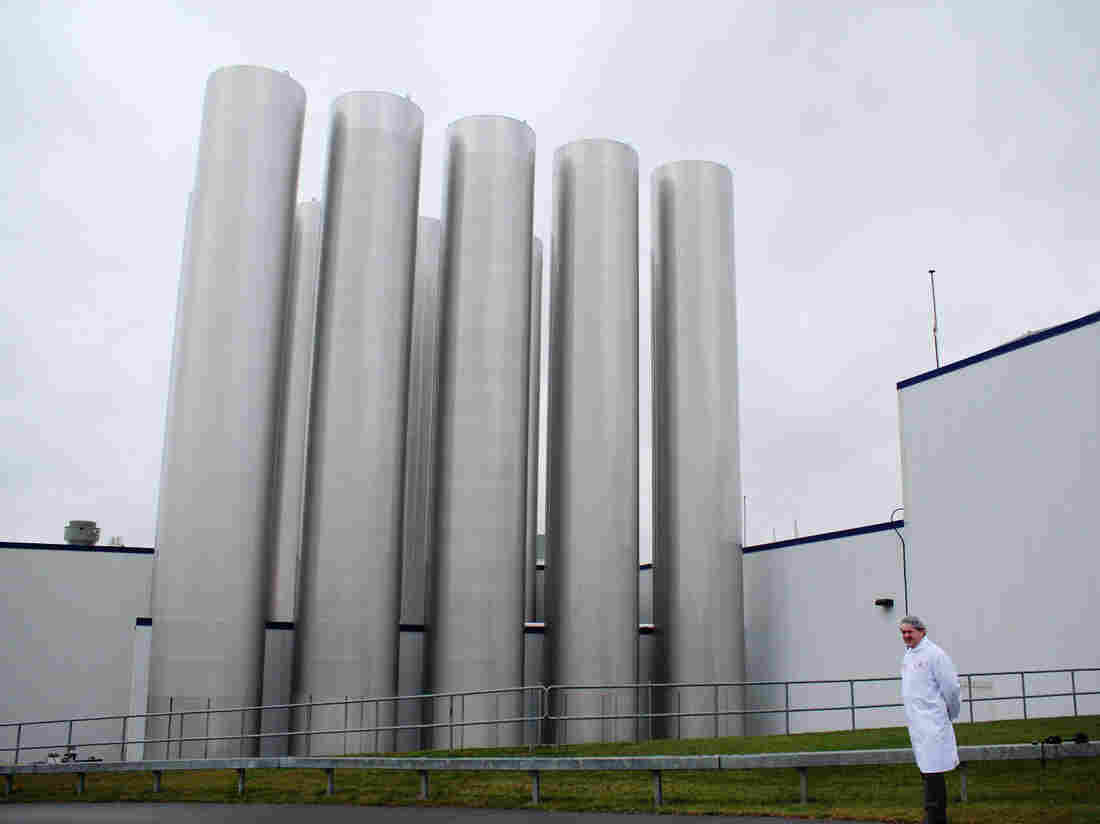 Most of the gleaming steel tanks outside Fage's yogurt factory hold milk. One, however, holds the yogurt byproduct whey. Dan Charles/NPR hide caption 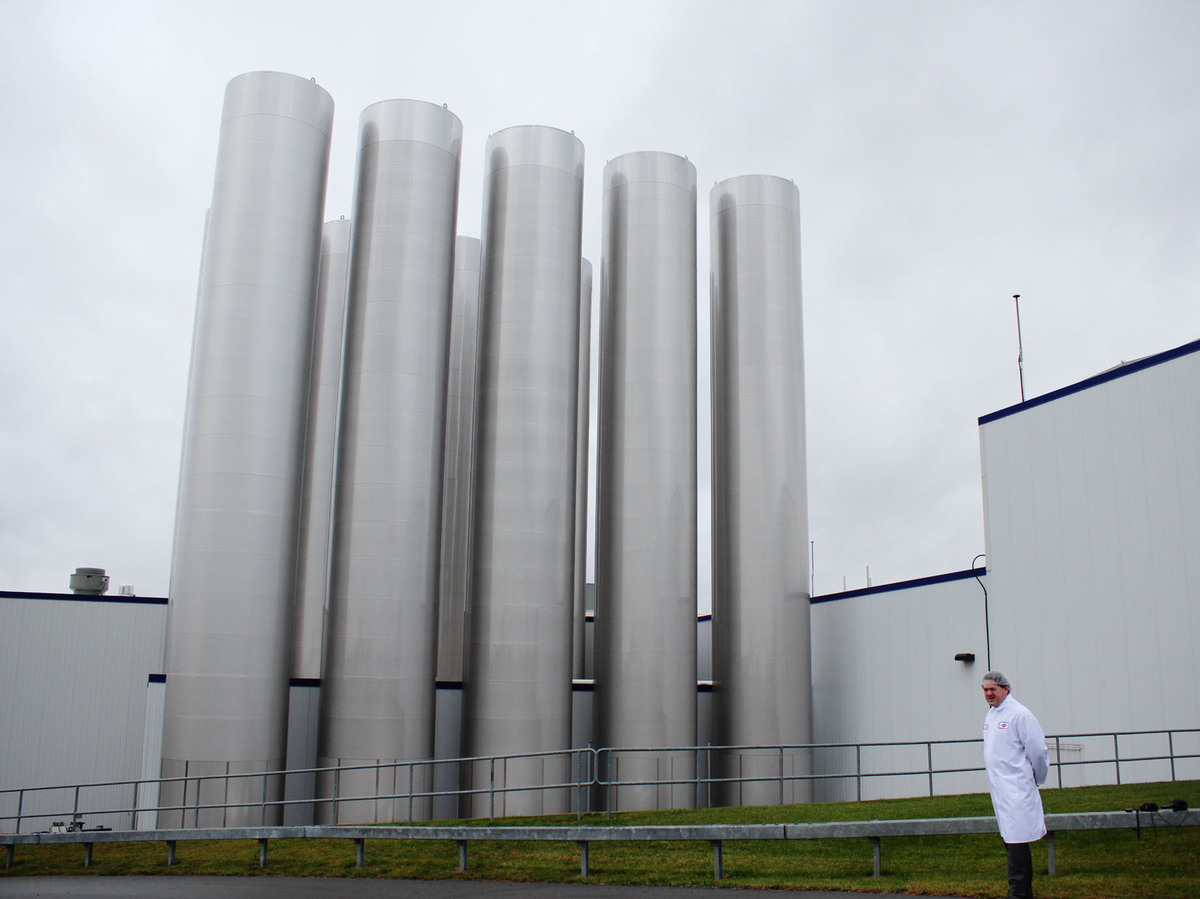 Most of the gleaming steel tanks outside Fage's yogurt factory hold milk. One, however, holds the yogurt byproduct whey.

A few months ago, I let you in on a little secret about Greek yogurt. Not all of this extra-thick, protein-rich yogurt is made the old-style way, by straining liquid out of it it. Some companies are creating that rich taste by adding thickeners, such as powdered protein and starch.

Judging by comments that I heard, a lot of people feel rather passionately that the original, strained version is morally superior. But here's another little secret: That traditional process for making Greek yogurt is also quite wasteful.

At the Fage factory in Johnstown, N.Y., for instance, it takes 4 pounds of milk to make 1 pound of authentic Greek yogurt. What happens to the other 3 pounds? It's strained out of the yogurt as a thin liquid called whey, and getting rid of that whey is actually a headache. Greek yogurt factories have to pay people to take it off their hands.

This may sound confusing if you heard my story about cheese-making the other week. That story described whey as a valuable source of lactose and concentrated protein that ends up in other food products (including the thickened version of Greek yogurt, in fact). 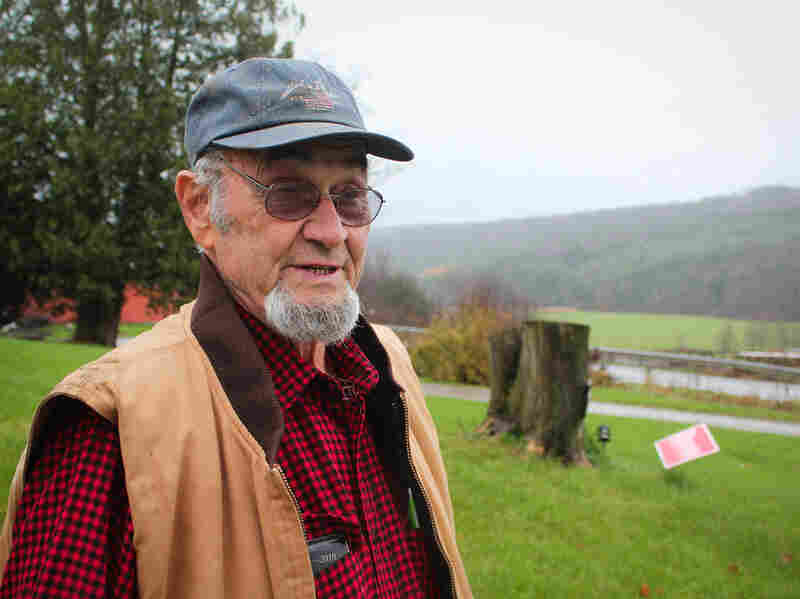 Unfortunately for Greek yogurt makers, their whey isn't nearly as valuable as what you get from cheese-making. The whey from the Fage or Chobani factories contains fewer solids and is more acidic. So far, nobody's figured out a way to make money from it.

What's more, you can't just dump it into some nearby river; that would be an environmental crime.

I met Bevington at Johnstown's wastewater treatment plant, which he used to manage. (He still works there as a consultant.) In the distance, less than a mile away, we can see the steel storage tanks of the Fage factory. Fage built its factory there, in fact, so it could pump its whey straight across the fields to this plant.

Not all plants could handle such waste, but this one can. It has something called an anaerobic digester, which is basically a huge tank where bacteria feast on this kind of waste.

"Anaerobic digesters love sugar; they love milk; they love beer," Bevington says. "Anything you can put in a digester that's 'high-strength' waste, bacteria love to eat it."

These helpful bacterial make the whey less harmful — and even convert it into something very useful: biogas, which is mostly methane. That biogas is burned in two powerful electrical generators, and they, in turn, supply most of the power that it takes to run Johnstown's wastewater treatment plant.

When the giant storm Sandy came through New York a few weeks ago and the state's electrical grid started to wobble, engineers simply cut the wastewater plant off from the grid and the plant relied entirely on these generators.

This is the best solution so far to the whey problem, but it's not perfect. It costs Johnstown taxpayers more to run these generators than it would cost to buy the same amount of power from the local utility. To cover that extra cost, Fage still has to pay the city to take the whey off its hands.

In addition, Fage now puts out more whey than the city's digester can actually digest. So the company has to find other takers for about 20 percent of its whey.

So does the Chobani yogurt factory, an hour or so east of here in the small town of East Berlin.

The Chobani factory, which is even bigger than Fage's, isn't fortunate enough to have an anaerobic digester nearby so it hauls most of its whey to farmers like Ken Dibbell, who lives outside the city of Norwich, about 10 miles from the Chobani factory.

The whey goes into the manure storage pit on Dibbell's farm, and eventually it gets spread on hay fields as fertilizer. Some other farmers mix it into their cattle feed.

Dibbell gets paid $300 every time he takes a 6,000-gallon truckload of Chobani's whey. "It's a cash cow," he says. "And anything you can do on the farm to generate cash, safely, you do it."

But there's a limit on how much each farmer can take; too much, and the whey would end up running off fields and polluting nearby streams.

The fast-growing yogurt factories in upstate New York have to dispose of millions of pounds of whey every day. So Chobani has to haul its whey long distances — hours, in some cases — to farmers who can take it.

That gets expensive. The state of New York, which is anxious to keep this yogurt boom going, has asked researchers at Cornell University to look for a better alternative. That alternative might be building more digesters to turn whey into biogas. It might involve new methods for capturing valuable sugars and proteins from the whey. Dave Barbano, a food scientist at Cornell, wrote in an email that "there are many technical possibilities, but making them economically attractive will be the trick."