Accessibility links
Real Chefs Grind It With A Mortar And Pestle : The Salt With mixers, blenders and food processors found in most kitchens, the primitive mortar and pestle may seem out of place. But the Stone Age tool can't be beat when it comes to creating tasty salsas, pestos and curries, chefs say. 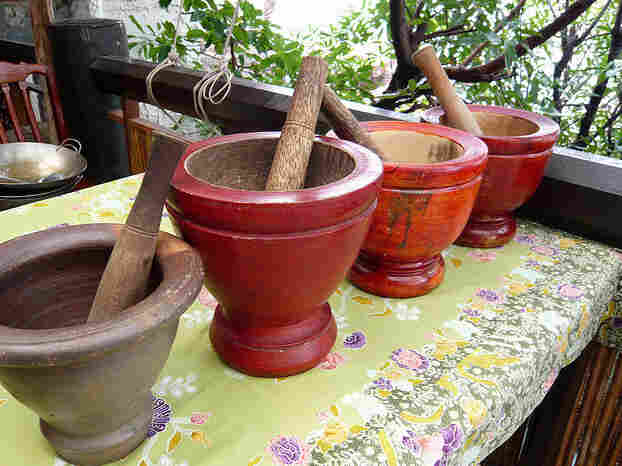 The mortar and pestle can be found in kitchens around the world, including Thailand. In the United States, chef Tanasapamon Rohman uses the tool to grind up chili paste and pulverize rice at her Thai restaurant. Jessical Spengler/Flickr hide caption 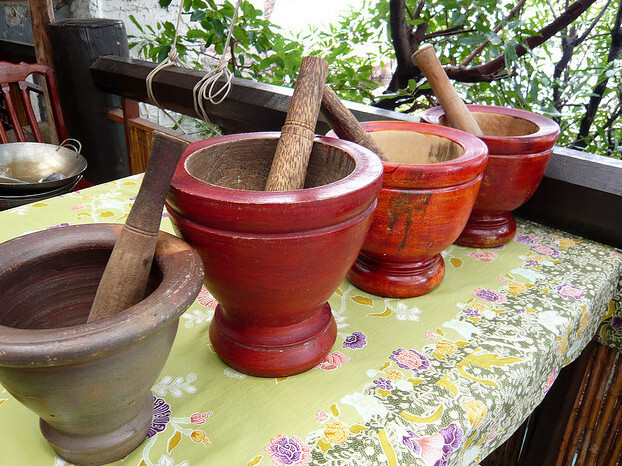 The mortar and pestle can be found in kitchens around the world, including Thailand. In the United States, chef Tanasapamon Rohman uses the tool to grind up chili paste and pulverize rice at her Thai restaurant.

Chefs these days stock all sorts of high-tech tools, from liquid nitrogen to $500 blenders. But in kitchens throughout the world, there's one piece of technology that's been the same since the Stone Age: the mortar and pestle.

The mortar and pestle is one of the most primitive kitchen tools. You place ingredients in a bowl — usually made of stone or ceramic — and pound them with a tiny club. They're used throughout the world, from a rough Mexican molcajete to tall Thai krok.

Chef Nancy Silverton says that a mortar and pestle is the sign of an engaged cook. She's always on the lookout for one when she has dinner at someone's house. "If I see a mortar and pestle, I know that I'm gonna get a good meal."

Even at Osteria Mozza, Silverton's high-end Los Angeles restaurant, chefs use this primitive tool to turn out several different dishes. "We do a romesco, which is a Spanish condiment that uses fried bread and tomatoes and peppers and garlic and almonds and hazelnuts. There's a French aillade; it's a garlic and nut sauce. And then pestos from Italy."

The word pesto comes from the same root as pestle. And Silverton says that for things like pesto, the mortar and pestle's definitely better. The food processor can heat up and turn the garlic bitter. Also it doesn't leave that nice chunky texture.

And this care isn't just taken at upscale Italian restaurants. At Portland's Chiang Mai, chef Tanasapamon Rohman uses a mortar to grind up chili paste or to turn rice into powder. And for dishes like papaya salad, it helps blend the flavors, in a way that a food processor just can't. "They smash each other, so they absorb the flavor, rather than just spinning and cutting," she says.

Although, Rohman admits, the pounding process can get a bit messy. "When you make chili paste, it's flying everywhere — pwwwwsh! On the wall, on the floor."

Rohman says that these days, most people in the Thai village where she grew up have food processors. But when it comes time for big celebrations, you still see a line of cooks pounding out chili paste by hand. "They believe in food. They believe in the result of it. They believe in the way, the process — something that is deep in the root," she says.

Adam Roberts writes the food website The Amateur Gourmet, and even from his Los Angeles apartment, he echoes the sentiment of these Thai village cooks. "This day and age — not to get on a soapbox — we're sort of disengaged in a lot of different ways. And I think a mortar and pestle is one of the great kitchen tools, if only because you are so directly connected to what you're doing," he says.

For his most recent cookbook, Roberts recently shadowed several top chefs to learn their secrets. And he said that more than any technique, the most striking aspect of professional cooking is that sort of direct connection.

"It's really about being really engaged in the process as it's happening. And mortars and pestles are a perfect symbol of that," Roberts says. "Because for a home cook who's in a rush, it's like the last thing you'd want to use — it takes much longer. But that's not the point."

The point, Roberts says, is to see cooking not just as something to get through, so that you can put your feet up and relax when you're done. It's about actually relaxing and enjoying the process of cooking itself. "Using a mortar and pestle for me is the equivalent of doing yoga or going to a spa," he jokes.

For Roberts, the mortar and pestle is an age-old way to really connect to your food — to get out of your head, and into your body. And to turn out better salsas, pestos and curries while you're doing it.