Accessibility links
At His Own Risk, Somali Chef Creates Gourmet Haven In War-Weary Mogadishu : The Salt London-raised Ahmed Jama won't give up on Mogadishu, even though his restaurants have been attacked by suicide bombers more than once. In fact, he's leading the city's cultural revival, one dish at a time, by offering residents and visitors a taste of authentic Somali cuisine and hospitality. 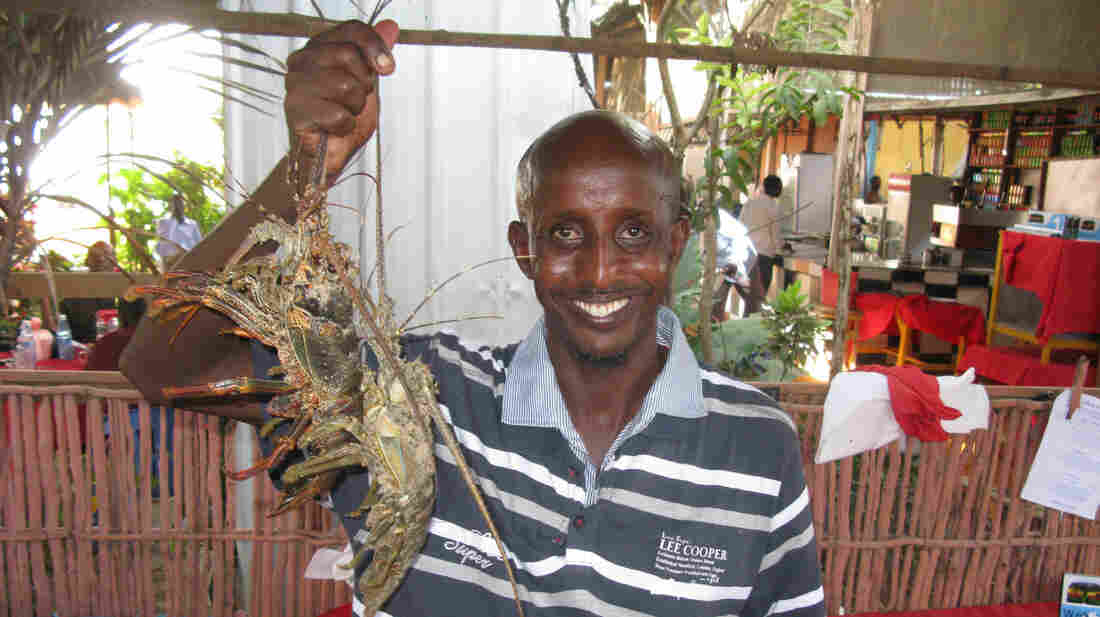 Somali chef Ahmed Jama holds up freshly caught spiny lobsters he's about to cook in one of his restaurants in Mogadishu. John Burnett/NPR hide caption 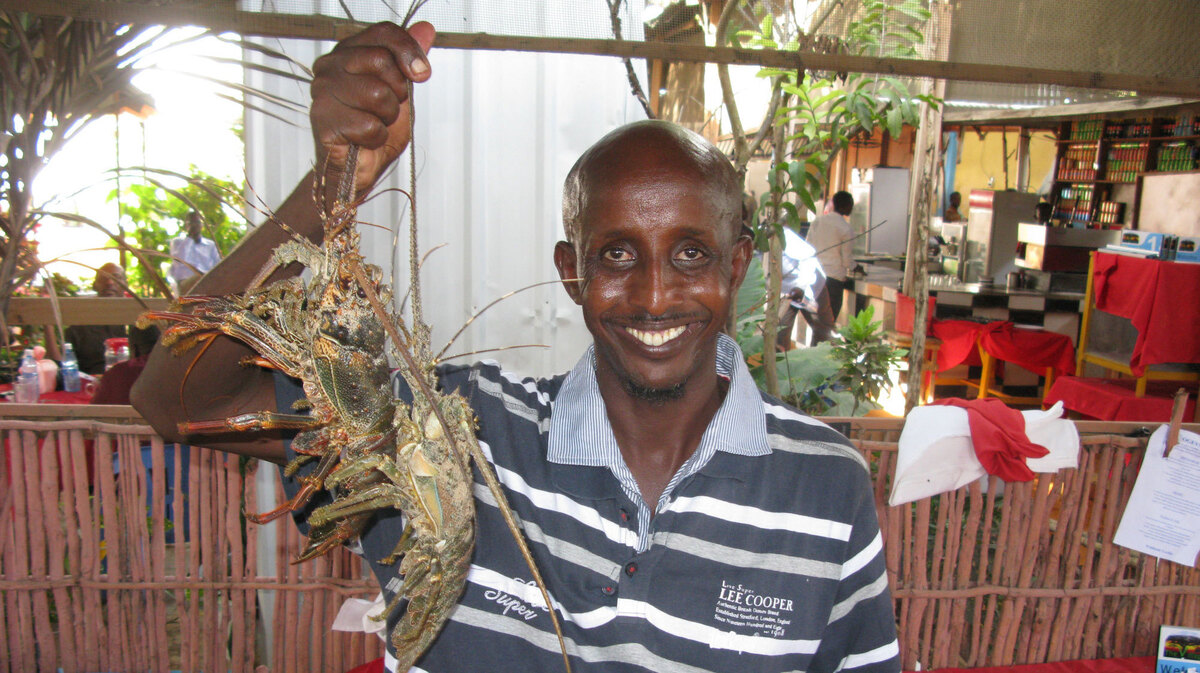 Somali chef Ahmed Jama holds up freshly caught spiny lobsters he's about to cook in one of his restaurants in Mogadishu.

Ahmed Jama was running a successful Somali cafe in southwest London when he decided it was time to go home. Against the urgent advice of friends, he returned to Mogadishu three years ago and started cooking.

Jama epitomizes the spirit of rebirth in the city that has been brutalized by 21 years of civil war. As expatriates return to take their homeland back from warlords, terrorists and looters, Jama is doing his part to revive Mogadishu one prawn at a time.

"This is all traditional Somali food," he says, standing in his open-air kitchen. "The soup I make from spinach, pumpkin, potatoes — all locally grown vegetables." The self-described "skinny, bald Somali guy" is surrounded by bubbling pots of broth and plates of lamb shoulder and lobster tails. His customers sit under a thatched roof on a floor of red African sand.

This is one of four restaurants Jama has opened in Mogadishu since he came back. A fifth is on the way. They're each named The Village, which is also on the sign of his London establishment.

The mindless violence that earned Mogadishu the moniker of the world's most dangerous city spared Jama's restaurants until two months ago.

On the night of Sept. 20, a crowd was enjoying tea and political gossip at his eatery in central Mogadishu across from the National Theater, when two men wearing explosive vests blew themselves up in the dining room. The blasts killed 14 people — including three Somali journalists — and injured 20. Jama knew all the customers who were casualties. The suicide bombers were thought to be connected to al-Shabaab, an Islamist militant group opposed to the Western-backed government of Somalia.

Jama dealt with the trauma of the attack the only way he knew how.

That restaurant was recently renovated and reopened.

After the bombing, Jama strengthened security at his other restaurants. His location in the Hodan district may be the only seafood shack in the world with its own guard tower. He says he wants his customers to feel safe and relaxed.

There is, in the Village Restaurants these days, the same feeling that was palpable when a beloved restaurant in New Orleans reopened after Hurricane Katrina: an emanation of humanity, a celebration of good food and a triumph over chaos.

His restaurants are islands of civility, conversation and slow food in a bludgeoned city. One only has to speak to his customers.

"I cannot even explain to you the meaning of what happened in Somalia. The worst of the worst happened here," says Burhan Gutale, a local businessman who never left. He says there wasn't a decent cafe to be found in Mogadishu during the civil war. People wolfed down their food, oblivious to palate, and raced home because they were afraid.

"I remember when he [Jama] started here," Gutale continues, "and I used to say, 'Please don't do it, it's not a good place.' He said, 'Listen, somebody has to start to do it. I have to create a place where people can come and talk decent. Let us do something different.' And he did it."

Symbolism aside, what draws people to the Village Restaurants is a reconnection with delicious, authentic Somali cuisine, which is a crossroads of tastes from the Middle East, Italy, Ethiopia and Persia.

A meal at The Village starts with a salad of shrimp, mango, lime, onion and strips of chapatti bread. A fillet of kingfish, caught that morning, is grilled over charcoal and enlivened with a light green-chili sauce. A side of rice is garnished with carrots, onion, cinnamon, cardamom, cumin, raisins and green pepper.

Everything is local, everything is fresh — because it's hard to get processed food in Mogadishu. There are also traditional Somali dishes on the menu such as soor, sorghum mash; canjeelo, Somali pancakes; and camel meat.

Locals say you couldn't get good food in Mogadishu during the civil war.

"Yeah, it's something Mogadishu needed. Mogadishu was all traditional food, the same canteen-style. So it's great somebody comes and opens a restaurant and raises the standards," says Fatima Abdullahi, a former BBC reporter and now a Somali political consultant who moved back from London.

The despite-all-odds success of the Village Restaurants has been an inspiration to other Somali expats to return and open businesses.

"Actually one of the reasons I moved back is, I was inspired by him. It takes a lot of courage," says Ismael Assir, puffing on a bubbly water pipe of flavored tobacco after a meal. Assir recently returned from Boston to sell solar panels here.

Courage indeed. On Nov. 3., the terrorists returned. That Saturday afternoon, two more suicide bombers tried to force their way into the restaurant where these interviews were conducted. When they wouldn't agree to the pat-down required of all customers, a gunfight broke out with security guards outside the entrance. Then they detonated their bombs.

Jama's guards were injured, but only the bombers died.

The workers cleaned up the blood and body parts and repainted the steel gate. Three hours later, the restaurant reopened.