Accessibility links
Tastier Winter Tomatoes, Thanks To A Boom In Greenhouse Growing : The Salt Just because it's cold doesn't mean we should have to give up delicious tomatoes. The "buy-local" movement has spurred a boom in greenhouse grown winter tomatoes in cold climates from Jackson Hole, Wyo., to Madison, Maine. And it uses less water and less land than conventional methods. 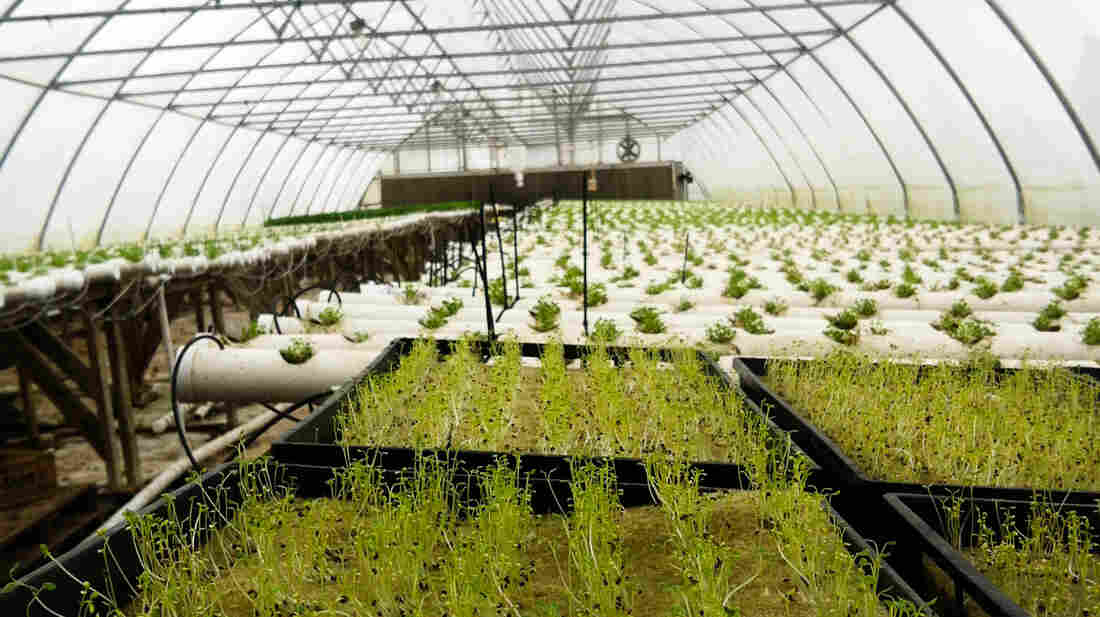 There's a greenhouse boom around the country, thanks in part to the "buy local" movement. Paul Mock grows tomatoes, herbs and other veggies year-round in his Berkeley Springs, W.Va., greenhouse and sells to groceries and restaurants in the Mid-Atlantic. Allison Aubrey/NPR hide caption

It may sound like an oxymoron: a delicious local, winter tomato — especially if you happen to live in a cold climate.

But increasingly, farmers from West Virginia to Maine and through the Midwest are going indoors to produce tomatoes and other veggies in demand during the winter months. "There's a huge increase in greenhouse operations," Harry Klee of the University of Florida tells us. 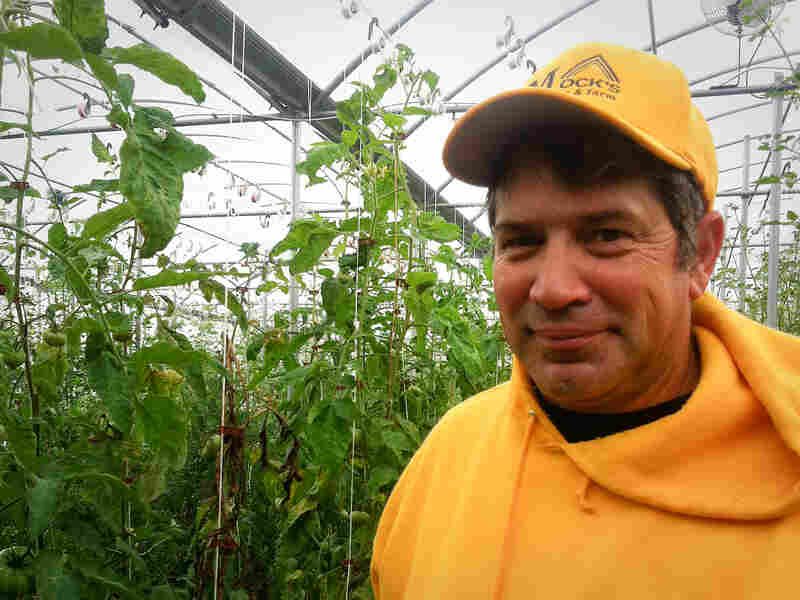 "This is unprecedented, the level of opportunity," says Mock, whose business is booming. Allison Aubrey/NPR hide caption

These are a far cry from the flavorless supermarket tomatoes typically found this time of year. When tomatoes are shipped long distances, they're usually harvested before they're ripe, which compromises taste. Plus, as we've reported before, some of the flavor of those supermarket varieties has been accidentally bred out.

The advantage of the new greenhouse model is that the tomatoes are grown not far from the cities where they're sold and eaten. And it's the locavore ethos that's driving this trend. "What's harvested today will be delivered to stores tomorrow," says Paul Mock of Mock's Greenhous and Farm in Berkeley Springs, W.Va.

Mock's business has boomed in the last few years, as retailers such as Wegmans and Whole Foods in the D.C., metro area snap up his heirloom and cherry tomatoes, as well as cucumbers and lettuces.

"There were times I had to pound the pavement" to sell produce, Mock says. Now he's being paid a premium, since "locally grown" produce is in high demand. "I'm finally having fun." 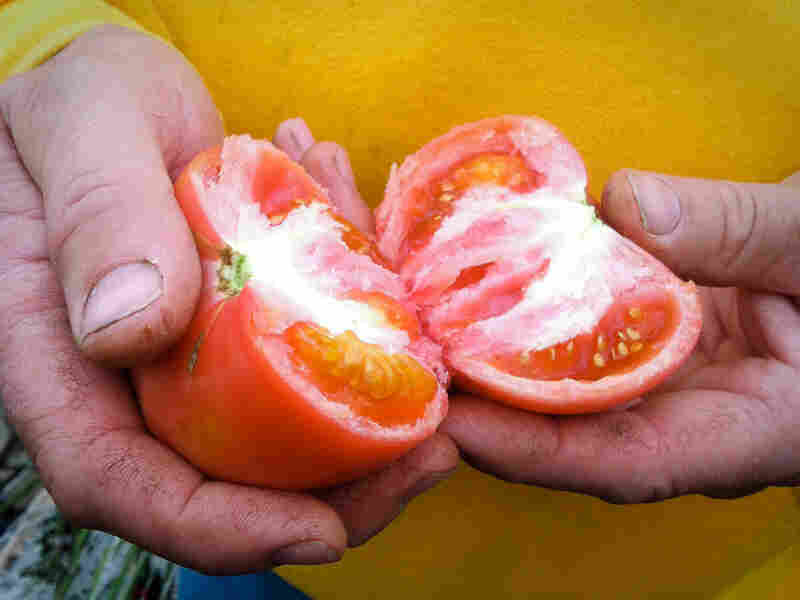 The taste of Mock's tomatoes starts with the seed. He uses only organic varieties, including cherry and several heirloom varieties. Allison Aubrey/NPR hide caption

Now even New Englanders can get summertime-tasting, fresh tomatoes grown not too far from home. In Maine, Backyard Farms is leading the way. And vertical greenhouses are changing the landscape, too, from the new garden spot at Chicago's O'Hare Airport to Vertical Harvest of Jackson Hole, Wyo., which is just getting started.

So how do they grow? Many of these operations are turning to hydroponic farming, which means the plants are not grown in soil.

As we've reported before, soil is one key component of tomato flavor, but it's not the only one. The hydroponic tomatoes get their nutrients (and fertilizer) from liquid solutions fed directly via irrigation hoses. This typically requires less water and less land than traditional farming.

In fact, it uses up to 10 times less land and seven times less water per pound, according to Kate Siskel of BrightFarms, a company that's scaling up local produce by building greenhouses at or near supermarkets

Mock says there's another advantage of indoor growing: "We've had very little damage from bugs." And he's been able to avoid using chemicals on the leaves or fruit of his plants.