Accessibility links
Can Big Food Kick Its Obesity Habit? Does It Really Want To? : The Salt Two top food policy experts square off on the role the food industry should play in the global battle against obesity recently, and the answers are as complex, interconnected and political as ever. 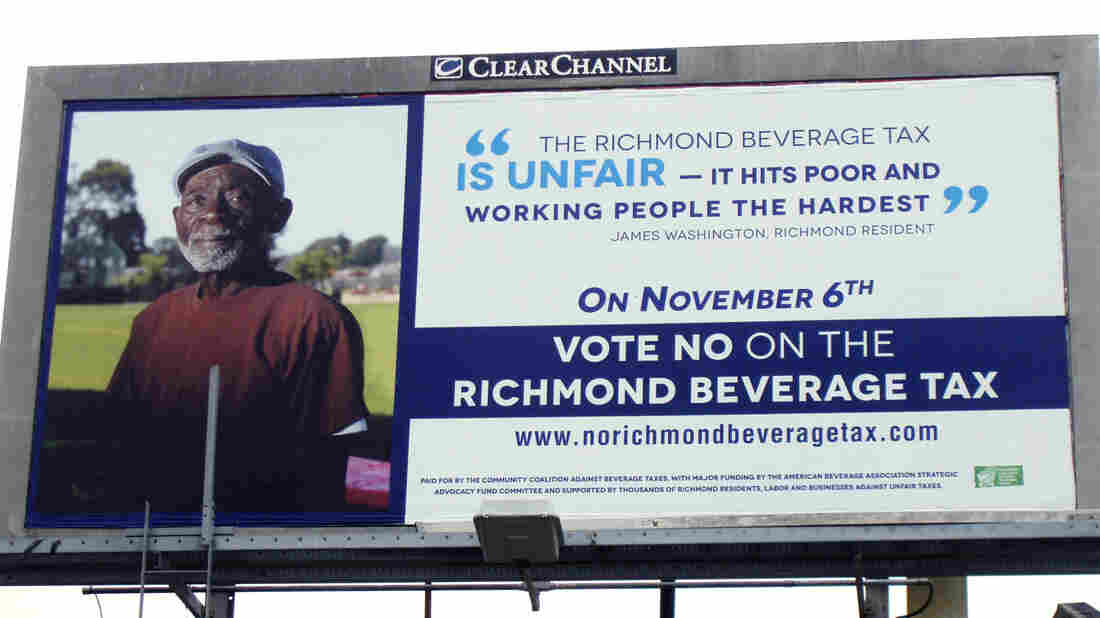 A sign protesting a beverage tax in Richmond, Calif. The U.S. soft drink industry has fought proposals that would put a tax on sugar sweetened beverages like sodas and energy drinks. Braden Reddall/Reuters /Landov hide caption 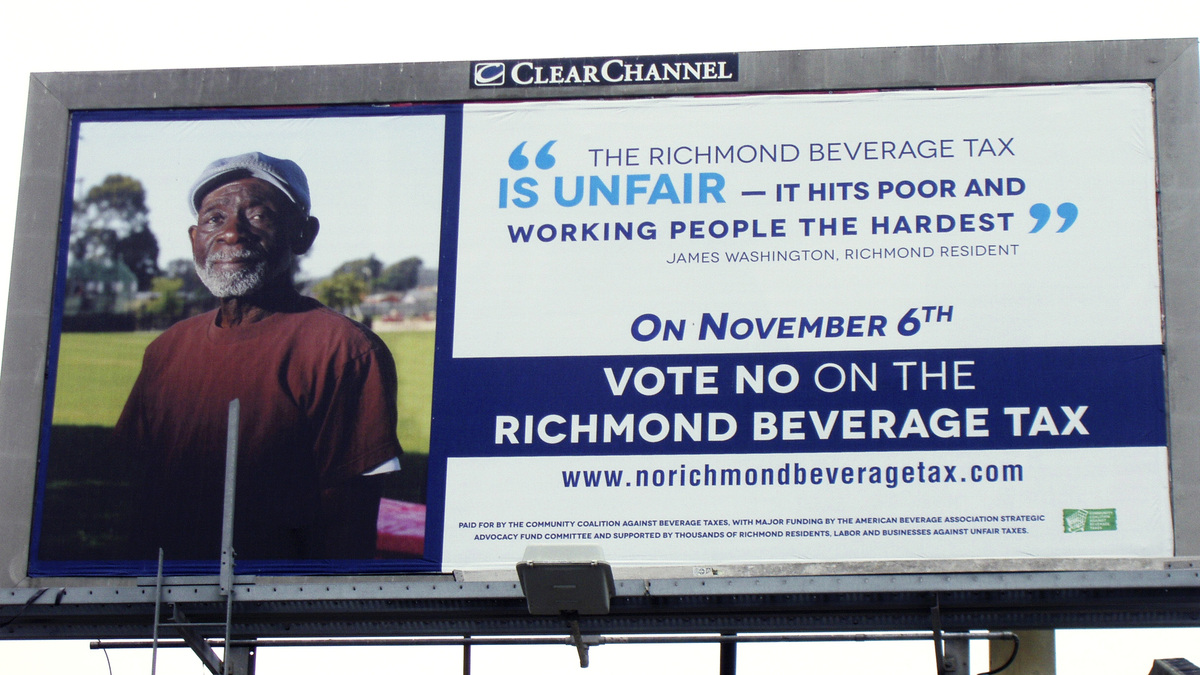 A sign protesting a beverage tax in Richmond, Calif. The U.S. soft drink industry has fought proposals that would put a tax on sugar sweetened beverages like sodas and energy drinks.

A few days ago, two big names in food policy squared off for a formal debate on the following proposition: There is a fundamental and irreconcilable conflict between the food and beverage industry's interests and public health policy interests on obesity.

Kelly Brownell,who leads the Yale Rudd Center for Food Policy and Obesity, led the anti-industry charge. He was opposed by Derek Yach, a soft-spoken South African who provoked much head-scratching in 2007 when he left the World Health Organization to take a senior executive job at PepsiCo. (Yach recently left PepsiCo to join The Vitality Group, an arm of a South African insurance company that promotes wellness.)

The proposition they debated contained some hidden historical spice. At the close of the debate, moderator Thomas Bollyky revealed that it was lifted from a landmark international treaty called the Framework Convention on Tobacco Control (FCTC), adopted in 2003. The words "tobacco industry" were simply replaced by "food and beverage industry," and "on obesity" added. (Interestingly, Yach was one of the architects of this treaty while at the WHO.)

Brownell certainly thinks so. At the debate, sponsored by the Council on Foreign Relations and held in its posh midtown Manhattan building, Brownell argued that food companies are fundamentally untrustworthy. He pointed to cases in which the industry set up front groups to fight a soda tax in California and fought national guidelines that would restrict the marketing of unhealthy food to children.

Perhaps because Yach stood beside him, or perhaps because of the pompous surroundings — David Rockefeller gazed down on the speakers from an enormous portrait on the wall — Brownell kept his rhetoric rather muted. In an article that he authored earlier this year, however, he hinted at parallels with Munich, 1938: "When the history of the world's attempt to address obesity is written, the greatest failure may be collaboration with and appeasement of the food industry."

The food industry can do some good things, Brownell admitted, when it comes to fighting hunger or promoting sustainable agricultural practices. But "obesity is a different kettle of fish" because solving it conflicts directly with the industry's most basic imperative: To sell more food. All of the industry's much-celebrated "healthy eating" campaigns and partnerships with public health initiatives, Brownell says, amount to "baby steps" that simply obscure this basic fact. Brownell dismissed the idea that companies could also prosper by selling better, healthier, more expensive food. There's no evidence, globally, that this market will be more than a niche, he said.

Yach, for his part, didn't bother trying to defend the entire industry or its current practices and products. He pointed, instead, to signs of a future still unfolding.

The real parallel to obesity isn't tobacco, Yach said, but climate change - a problem that will demand the expertise of industry. Just as energy companies once just tried to sell more oil, "the multinational food and beverage business model has favored quantity over quality," he admitted. And just as energy companies are now investing in green energy, the food industry is starting to realize "that this must change if if is to survive and prosper. I witnessed the intensity of change while at PepsiCo for the last five years."

The market share of mid- and low-calorie beverages in PepsiCo's lineup, he said, was only 25 percent five years ago. Today, it is 50 percent, and "is likely to reach 75 per cent within the next five to eight years. And this is happening even in a recession, in a climate where short-term pressures are intense."

Yach's most powerful words came near the end of the debate, in impromptu remarks that he added to his prepared script. The debate, by this time, had turned to the question of whether food industry representatives should be barred from policy-making discussions related to food, similar to a ban that governments have placed on scientists sponsored by the tobacco industry.

Yach argued that the food industry is already changing, and there's more change in store, if the conversation continues.

"We have to recognize that drawing opponents into debate changes them forever," he said. "I saw that happen in South Africa [with apartheid]. And I don't think that obesity is a bigger problem than what could have happened in South Africa, if you hadn't gone down the road of constructive engagement. ... We need more engagement, not less."