Accessibility links
In Farmers Market, A Free Market Rises In Cuba : The Salt Farmers in the communist nation were once banned from freely selling their crops. As the country struggles to feed itself, the government has begun to accept a greater role for the profit motive. Now each night, in a muddy vacant lot on the edge of Havana, a market appears after sundown. 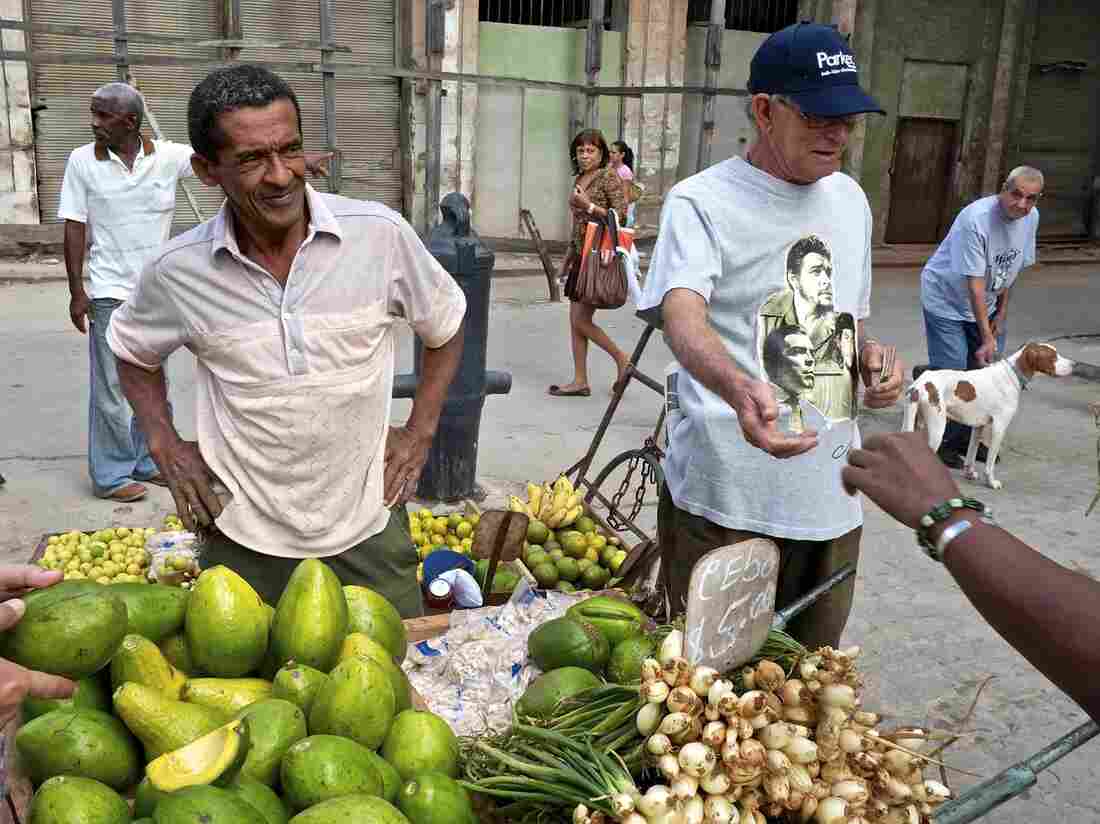 Cuba has relaxed some business rules, allowing street vendors to sell produce and a large wholesale produce market to open at night on the edge of Havana. Greg Kahn/Getty Images hide caption 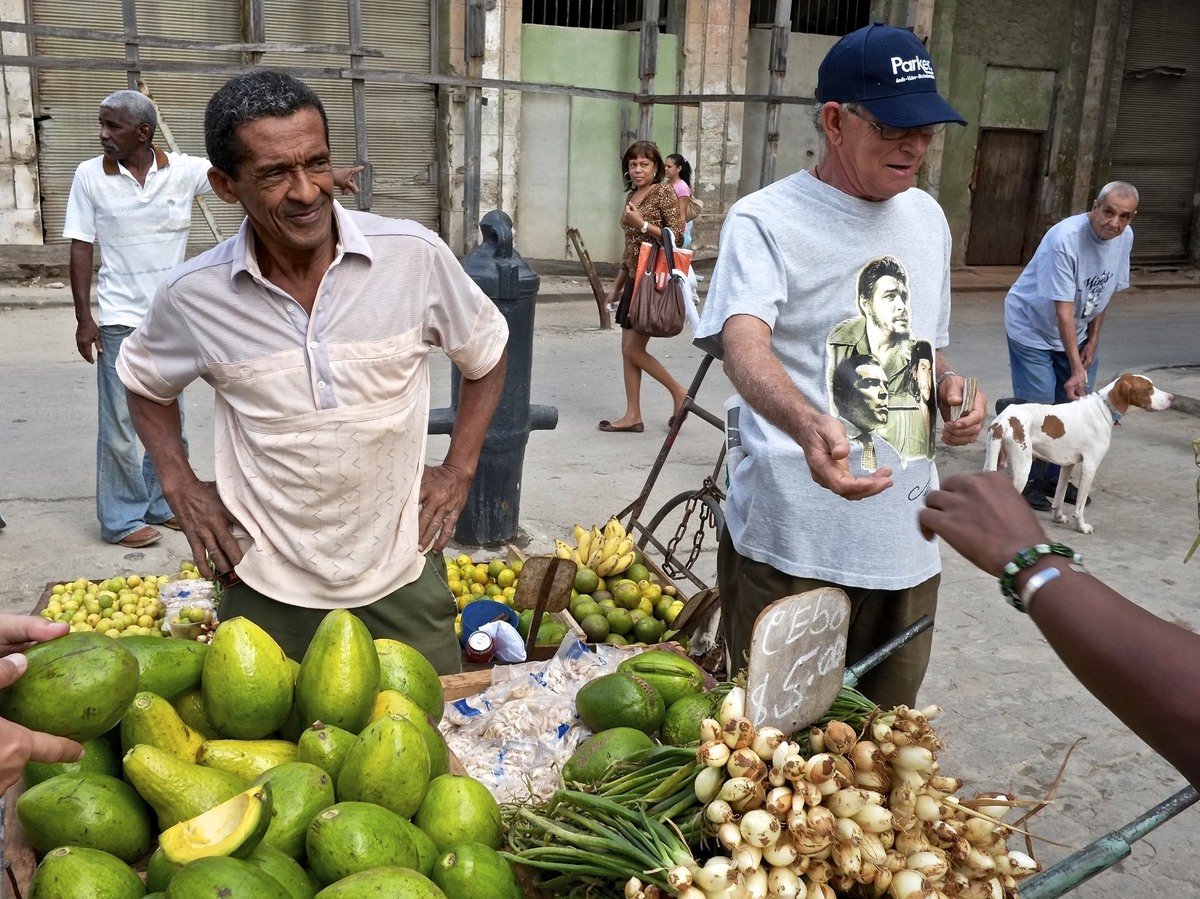 Cuba has relaxed some business rules, allowing street vendors to sell produce and a large wholesale produce market to open at night on the edge of Havana.

Cuba has no shortage of fertile farmland, but the country spends $1.5 billion a year importing about 70 percent of its food.

The communist government's chronic struggle to get farmers to produce more is forcing authorities to grudgingly accept a greater role for market principles and the profit motive.

Now authorities seem willing to go another step further, tolerating the rise of what might be described as Cuba's "free-est" market.

This market, on the edge of Havana, only exists at night, appearing after sundown every day in a muddy vacant lot. Scores of battered, sputtering Chevy farm trucks and ancient Ford tractors arrive loaded with onions, squash, papayas and cabbage. It must be the largest gathering of 50-year-old American farm equipment anywhere on the planet.

The market doesn't have any signs, or even bathrooms, adding to the impression that Cuban authorities haven't quite accepted its permanence. Sales are done in cash under the faint glow of cellphone screens and lanterns. Even the police, who are ubiquitous elsewhere in Cuba, seem absent here.

Wholesale produce markets like this one exist all over Latin America, of course, where farmers can drive to the city and freely sell their crops. But in Cuba, there hasn't been anything like this in a half-century.

Armando Manzo has driven 250 miles from his farm in Cuba's Villa Clara province, with the family's 1957 Chevy Bel Air sedan stuffed to the roof with garlic. It's the kind of act that in the past wasn't allowed by a government that has spent decades micromanaging food production and distribution, often with disastrous results.

"The police would stop you and confiscate your produce," Manzo says in Spanish. "It was madness. Now what we're doing is legal."

Like other private farmers here, Manzo still has to meet an annual production quota that requires him to sell about a quarter of his harvest to the government at artificially low prices. But since taking over Cuba's presidency from his brother, 81-year-old Raul Castro has been gradually dialing back the island's state-dominated system.

Castro has turned over millions of acres of state land to private farmers and cooperatives, enough to lure Cubans like Ramon Gonzalez back into farming.

"There's more incentive to work harder," he says in Spanish. Dressed in a blue Best Buy shirt and selling sacks of sweet potatoes, Gonzalez says he quit his government job as a mechanic three years ago and joined a cooperative. The more you can sell, the more money you can make, he says.

The days of empty Cuban produce stalls appear to be over, but food prices here have never been higher. So far, the move toward a more market-driven model hasn't been popular with Cubans who depend on government pensions and the state salaries that average little more than $20 a month. For them, a single avocado or a pound of tomatoes can equal a full day's wages.

But even as Castro complains in speeches about costly imports and urges Cubans to produce more, his government still hasn't taken basic steps like letting farmers buy new trucks and tractors.

"If we don't give farmers access to a market for equipment and supplies, the problems will continue," University of Havana economist Juan Triana says in Spanish. But that's just one factor among many.

The main customers at the wholesale market are the pushcart vendors who have flooded Cuba's streets since Castro licensed them to work legally. Most are young men like Alejandro Cruz, riding homemade tricycles with makeshift carts mounted on the back. Working as independent entrepreneurs has left them wanting more.

"There's still too much government control," says Cruz in Spanish. "They have to loosen up so there can be more business on the streets and people can make a living without fear."

One pushcart driver who complained of police seizing his wares put it another way. Asked what he thought of new regulations that will compel vendors to limit cart sizes and wear uniforms, he puts his hands around his throat and says as soon as there's something good, they choke it off.