Accessibility links
At Hanukkah, Pastry Reminds Portland Jews Of Their Mediterranean Roots : The Salt The cheese-and-spinach-filled food called a boyo was once served on the Shabbat tables of Jews who lived in the Ottoman Empire. Today, the Turkish-style pastries are mostly reserved for the holidays. 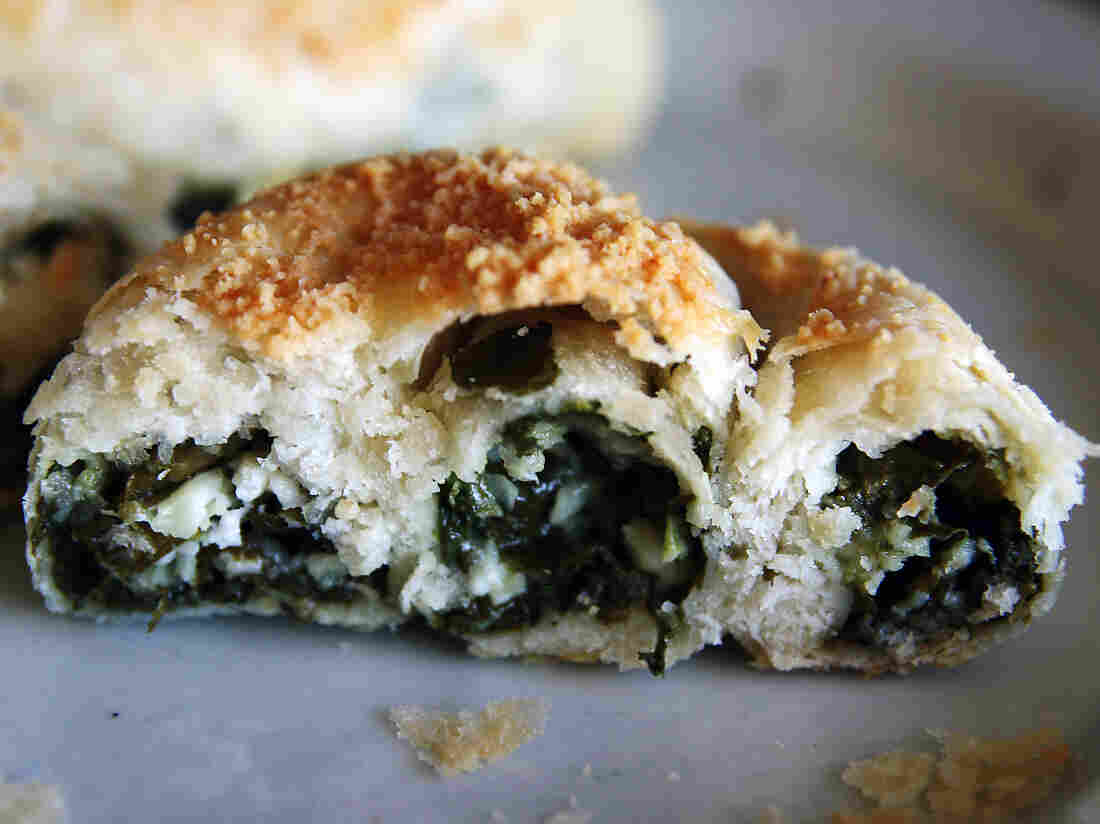 Called a boyo or bulema, this Turkish-style pastry was traditionally made for the Jewish Shabbat. Today, boyos are mostly reserved for holidays like Hanukkah. Deena Prichep for NPR hide caption 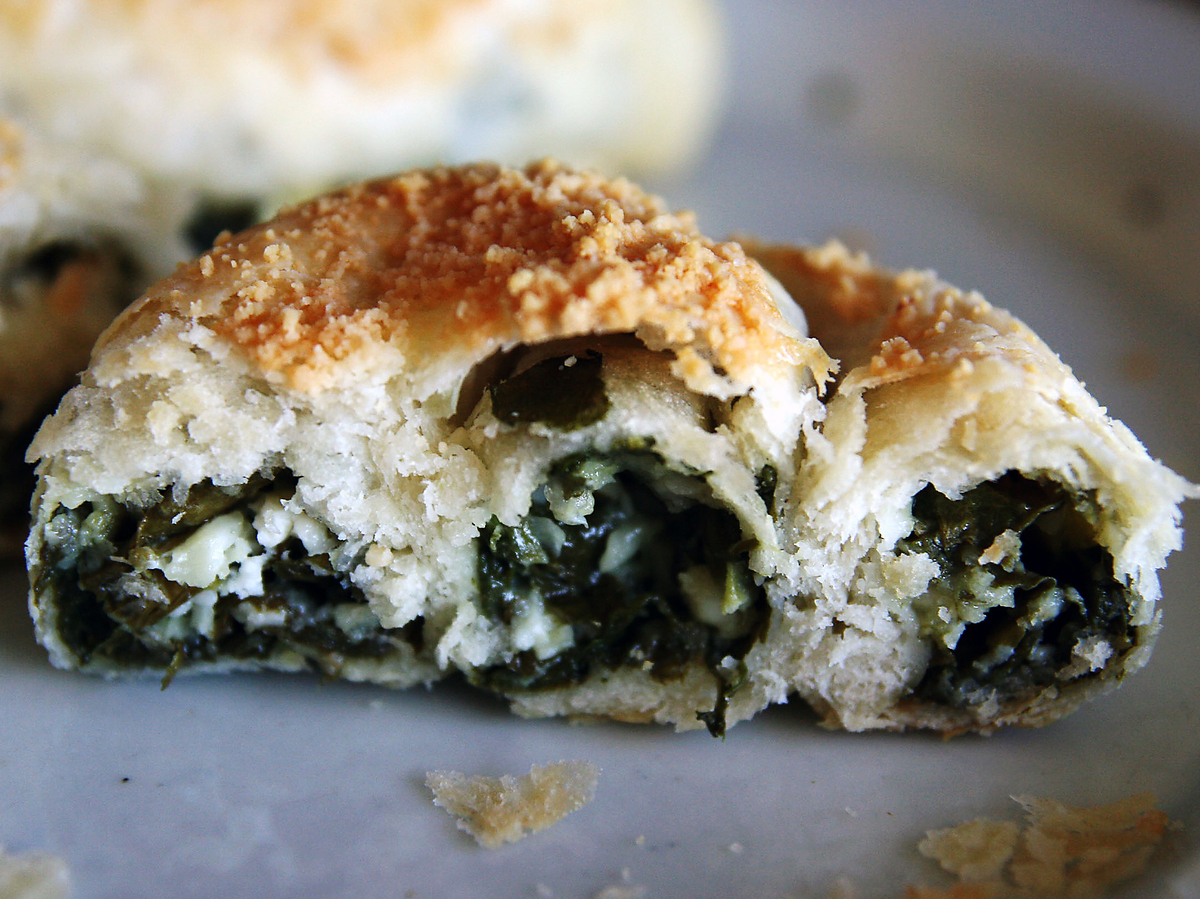 Called a boyo or bulema, this Turkish-style pastry was traditionally made for the Jewish Shabbat. Today, boyos are mostly reserved for holidays like Hanukkah.

In some Jewish homes this Hanukkah, families will celebrate with an alternative to the traditional potato latke: the boyo. These Turkish-style stuffed pastries — also known as bulemas, depending on their shape and the village their maker comes from — are made by Jews whose ancestors lived in the Ottoman Empire.

Traditionally, boyos were made for Shabbat (the Sabbath) and the Jewish holidays. But these busy days, they're reserved mostly for the holidays.

In Renee Ferrera's Portland, Ore., kitchen, every available space is taken over with boyo-making when the holidays roll around. For this Hanukkah, there are bowls of spinach and cheese filling, trays of dough, lines of uncooked boyos waiting for a dusting of Romano cheese, and racks and racks of golden pastries, cooling from the oven.

Ferrera's boyo recipe comes from the island of Rhodes, now part of Greece, from where her immediate family emigrated before World War II. The island once boasted a large Jewish population with its own distinct cuisine and a history that goes back at least to the second century B.C.

Influenced by places like Greece, Spain and Turkey, the Rhodesli Jewish population had a distinct culture all its own. The community was so strong that it was even called La Chica Yerushalayim, or "Little Jerusalem," in Ladino, the Judeo-Spanish language commonly spoken there.

Many Rhodesli Jews came to America in the early 20th century, with an influx to Seattle (and, later, to Portland). The remaining Jews on the island were sent to concentration camps during World War II.

Growing up, Ferrera and her cousins always looked forward to boyos on the holidays. But sometimes it got ugly.

"We would be sitting at the table, eating these like crazy," Ferrera remembers, "and then we would start fighting over who had how many. 'You can't have that one, I've only had one.' Literally, at the table, during the holidays. So finally, my mother, I think it was, said, 'That's enough! We work for two days, slaving over them, and you guys eat them down like candy. Next year, you're going to make them, not us!' And I'm sure my mother said that expecting us to say, 'Oh, no, we appreciate everything!' Instead, we said, 'OK. That's what we'll do.' "

That challenge was issued 25 years ago, and every year since, the cousins — now with grown kids of their own — have gathered together to make the boyos.

Ron Sidis has been there from the beginning. "There are times where every workstation is taken. There'll be four around the table rolling the boyos. I've always been the doughboy, always done the dough, from Day 1." 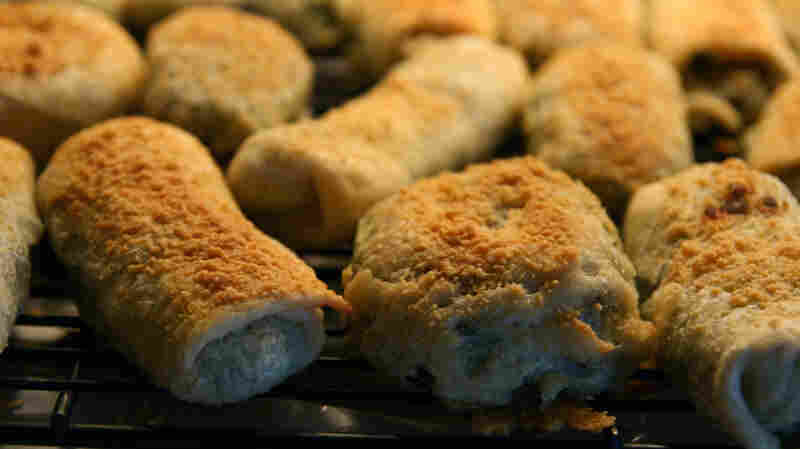 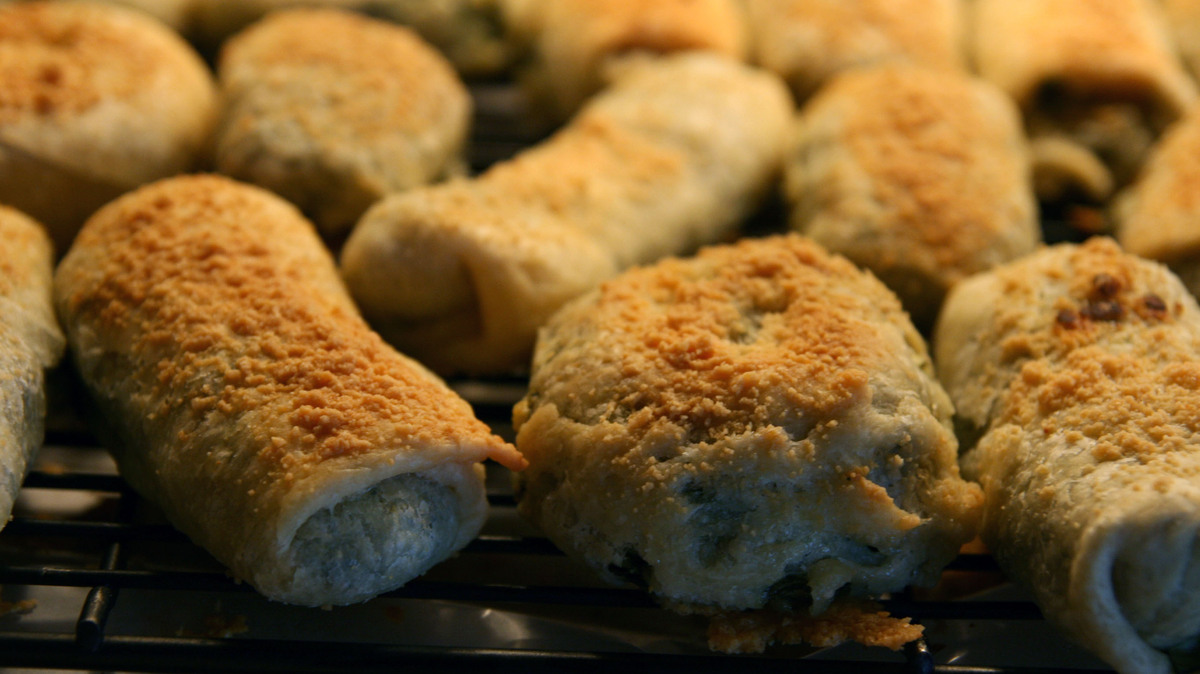 Boyos cool on a rack in Renee Ferrara's kitchen in Portland, Ore.

The dough is flaky and rich with oil and shortening — fitting for Hanukkah. And the holiday mood is warm, although there have been some squabbles over the years. The older generation was even booted out of the kitchen once over some dispute about an eggshell.

Sidis says that continuing the tradition meant a lot to him. Even after his mother got Alzheimer's, and no longer spoke, she would continue to help out. "We would pick her up and bring her over. And she actually took each boyo and put it in the Romano cheese for us. And she didn't have to talk — she was just there helping us. She did that, I think, up to the year before she died."

Ferrera says that pulling out her mother's handwritten recipe for the boyos every year connects her to family members who are no longer around — and to the larger history of Jews from Rhodes.

"At the synagogue in Rhodes, there's a big plaque. And it has the last names of all the families that lived on the island that were taken off during World War II and taken to the concentration camp," she says. "Every single family name in my whole extended family is listed on that plaque."

Today, there are just a handful of Jews on Rhodes, and the population of Rhodesli Jews in Portland is also dwindling. But as the cousins divide up the nearly 150 boyos on Ferrera's counter, this tradition feels very much alive.

Mix above together and let bubble.

1 cup grated Romano cheese (or more, to taste), plus additional for topping

** Ferrera usually buys one 2 1/2-pound bag of spinach, then washes once, spins in the salad spinner, chops 1/2-inch thick, and lays out on a table to dry overnight, with cloths under and paper towels over spinach. If it is warm, turn spinach once.

Note: The dough can be made the night before — after Step 4, set in the refrigerator in pan of oil, covered with plastic wrap and then aluminum foil. Bring dough to room temperature before using.

1. Knead dough very well until it forms a soft dough (8 to 10 minutes). If using a mixer with a dough hook, knead for 8 to 10 minutes after dough has hooked.

2. Divide dough into 4 pieces. Make them into patties and place on a cloth that is floured. Oil the top of each patty and cover well in a warm location. Expose to as little air as possible. Let rise for half an hour or more, until double in size.

3. Take each patty and roll out with a rolling pin to form as large a piece as possible without developing holes. Do this on a floured surface. Spread a thin layer of shortening over stretched dough.

4. Roll tightly along the long edge into a cylinder, like a jelly roll, and set each roll into a pan of oil (1/2-inch deep). Cover with wax paper or plastic wrap and a cloth and set aside for one hour or more to rise.

6. Pull off or cut a small piece of dough, about the size of an egg, and roll until dough is very thin. Add spinach mixture and form boyo so dough completely encloses spinach mixture. Use oil on work surface if necessary. Coil into a round shape and place on a greased or parchment-lined pan, and sprinkle with additional Romano cheese.