As any cheese maker will tell you, it's not that hard to make cheese. You just take some fresh milk, warm it up a bit, and add something acidic to curdle it. Then, once it has cooled, you drain off the whey — the liquid part — and you're left with cheese.

But when did we figure out how to do this? According to a new paper in the journal Nature, at least 7,000 years ago. Since then, the process hasn't changed much.

Melanie Salque is the paper's lead author and a chemist at Bristol University in England. She says some of the first clues of Neolithic cheese-making were a bunch of strange clay vessels unearthed by archaeologists in the 1970s in Northern Europe. "They were very peculiar because they had very small holes in them," says Salque. 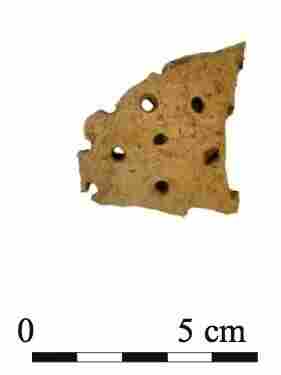 Peter Bogucki, a Princeton archaeologist who dug up these pots, says they baffled him and his colleagues. Some thought the sieves might have been used to hold hot coals, or strain honey, or prepare beer. But Bogucki wondered if maybe they had something to do with cheese.

For decades there was no way to prove his pots were ancient cheese strainers. Now new techniques have finally allowed researchers to analyze residue that had seeped into the clay. And they found that its chemical signature matched cow's milk.

The simple ancient cheese was an important step in the development of modern civilization. For people who were just beginning to leave hunting behind and beginning to rely on crops that often failed, dairy products had the potential to get them the nutrition they needed. And they were a food source that didn't require killing highly prized livestock.

"Milk is a superfood — it's probably the ultimate superfood," says Mark Thomas, a evolutionary geneticist at University College London who has studied the DNA of these early cheese makers. But he says Neolithic Europeans had a problem — like most modern humans, they were lactose intolerant.

"Very few or none of the people at that time would have been able to digest the sugar in milk," says Thomas.

But the process of making cheese removes a lot of this sugar — the lactose. It would have been dissolved in the whey and drained off by those ancient cheese strainers so the farmers could get their daily dose of dairy without the intestinal problems. Richard Evershed, a chemist at the University of Bristol in the U.K. and another author on the study, has found milk residues in pottery shards from southwestern Libya, which suggests prehistoric people were also producing yogurt in the same period.

"Milk gave us something — some extra edge in terms of survival," says Thomas.

And that edge meant we had more time and energy to improve farming methods, invent new tools, develop cooking techniques, and eventually perfect the cheese blintz.