Accessibility links
Sowing The Seeds For A Great American Chestnut Comeback : The Salt At the turn of the 20th century, a deadly fungus wiped out billions of American chestnut trees from the forests of eastern North America. But, growers are now trying to rebuild a U.S. market with Chinese and European chestnut species and re-introduce Americans to chestnut cuisine. 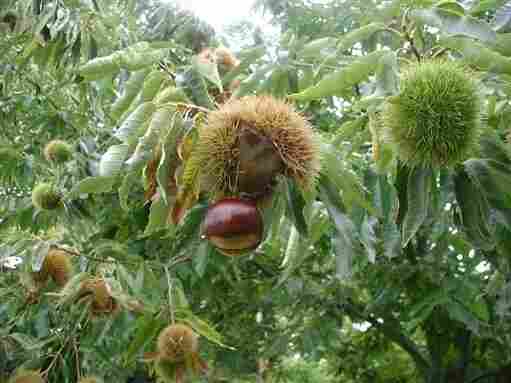 Michigan growers harvest 'Colossal' chestnuts, like the one above in New Paltz, N.Y. "If you're going to work in the kitchen with a pound of chestnut, [the] largest best tasting chestnut you can find is the one you want to use," says MSU plant pathologist Dennis Fulbright. Lee Reich/AP hide caption

Though we hear about them every holiday season in that famous song, chestnuts – whether roasting on an open fire or otherwise – have been noticeably absent from many American tables for decades, thanks to a deadly fungus that decimated the species near half a century ago. But a small army of determined growers have been on a seemingly quixotic quest to put chestnuts back on the American table, and they're just starting to see results.

"There's a steady and consistent growth, in the number of growers, the number of acres, and the number of people who are buying chestnuts," says Michael Gold, a forestry professor at the University of Missouri's Center for Agroforestry. That's a little bit to do with America's bustling foodie culture. Growers are branding the chestnut as a health food, and are more poised to handle the ecological pitfalls of the past.

First, here's a little history on why the giant American chestnut – once a steady nut producer for humans and animals alike – virtually disappeared. In 1904, scientists noticed odd rusty cankers on northeastern chestnuts. The culprit: a fungus called Cryphonectria parasitica or "chestnut blight". They tried to stop the blight with fungicides, breeding American trees with naturally resistant Asian varieties, and even nuclear radiation, with no luck. So, by 1940 – it had left approximately 3.5 billion dead or dying chestnuts in its wake. (The American Chestnut Foundation is still hard at work at developing a resistant Asian/American hybrid). 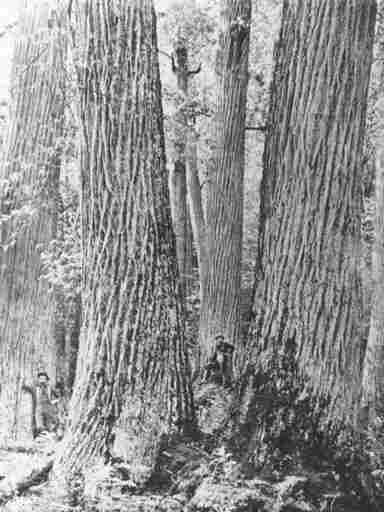 In the early 1900s, two men stand amid five American chestnut trees near Townsend, Tenn. Once called "the Redwoods of the East", chestnuts made up 25 percent of Northeastern American forests. HO/AP hide caption 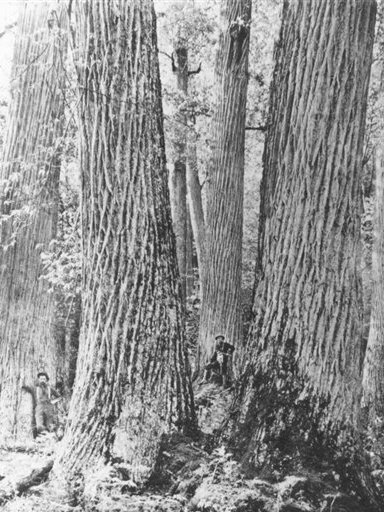 In the early 1900s, two men stand amid five American chestnut trees near Townsend, Tenn. Once called "the Redwoods of the East", chestnuts made up 25 percent of Northeastern American forests.

Now, of course one can still find chestnut vendors selling funnels of roasted nuts in cities like New York. But they are largely imported. "You can still find them in Europe and Asia because they never left those places," says Dennis Fulbright, a plant pathologist at Michigan State University who advises a Michigan grower cooperative called Chestnut Growers, Inc. Chinese chestnuts strongly resist the blight, while European chestnuts have enough resistance to survive a blight infection. They still have to worry about blight in European trees, but a virus that essentially gives the fungus a cold has allowed growers to treat individual trees successfully.

Fulbright attributes some of the nut's resurgent popularity to the simple fact that it's healthy. "It's low in fat; it's gluten free," says Fulbright. "People discovered that it's probably one of the best foods on the planet – from the Roman legion to resistance fighters in Europe during WWII."

U. S. chestnut imports have held steady around 4,000 metric tons, with creeping increases in the last ten years. If you're on the west coast, it's likely the chestnuts you're buying are a Chinese or Japanese species from China or South Korea, and if you're on the east coast, you're likely purchasing European chestnuts from Italy or Turkey.

But, you don't have to live a coastal urban metropolis to enjoy chestnuts. Thanks to increasing numbers of U.S. growers cultivating hybrid and foreign varieties, roasted chestnuts are reappearing at holiday festivals and in local supermarkets in the middle of the country, too. "They're now in small town America," says Fulbright. Michigan leads with around 200 growers, followed by Oregon and California.

Michigan growers plant a cold climate friendly European/Japanese hybrid called 'Colossal', while other states like Missouri grow Chinese chestnuts. European and hard-to-find American chestnuts are slightly sweeter than Chinese varieties, but Fulbright says, "most species of chestnut taste about the same by the time you could use them in a culinary dish." (Here's a how-to guide on cooking chestnuts.)

Many growers hand harvest to serve a niche, regional market, but they hope to modernize with grabbing tools called nut wizards and vacuum and all-in-one self-propelling harvesting systems. On the processing side, anti-microbial treatments help improve chestnut's short shelf life. "It's like an apple, if you leave them on a table they'll go crummy," says Dan Guyer, an engineer at MSU who's experimenting with X-ray chestnut sorting technology.

And then there are new marketing strategies. Chestnut flour is aimed at the gluten free crowd, but there's also chestnut honey and beer. MSU helped develop peeled-frozen chestnut packs, hoping to appeal to the shopper on the go.

In Missouri, Gold likens it to selling a novel exotic fruit in U.S. markets for the first time: "We see our role as the catalyst in developing what we call the 'new' chestnut, as a new crop for American palates."

But, U.S.-grown chestnuts now face another set of threats – some that have been around, like root rot fungus, and some new imports, like the Asian gall wasp. Fulbright says that growers are already taking defensive steps. "I'm optimistic," he says. Hopefully, this time around chestnuts will be here to stay.