Accessibility links
Killer Cocktails: Shaken With A Splash Of Malaria Drugs : The Salt Many modern day liqueurs, like Campari and Pimm's, started off as 19th century medicinal tonics made to cure an array of ailments, including malaria. So if you're sipping a French aperitif or an absinth cocktail this holiday season, chances are you're also imbibing a bit of malaria history.

Elixirs Made To Fight Malaria Still Shine On The Modern Bar

Elixirs Made To Fight Malaria Still Shine On The Modern Bar 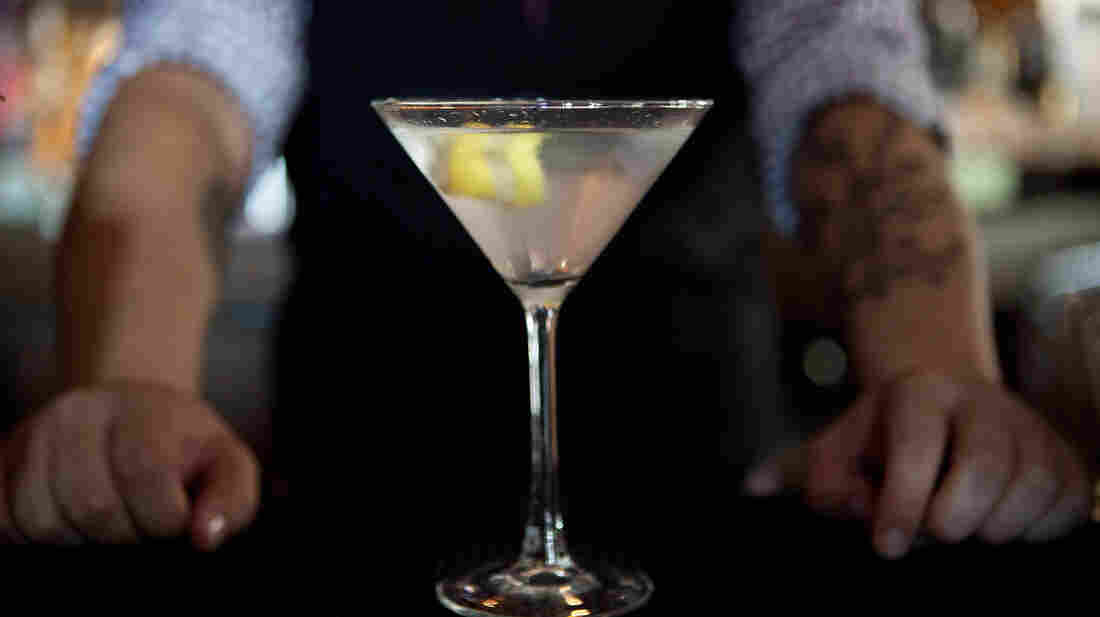 Shaken with splash of malaria drug, please. The original James Bond martini is made with gin, vodka and Kina Lillet, a French aperitif wine flavored with a smidge of the anti-malaria drug quinine. Karen Castillo Farfan/NPR hide caption 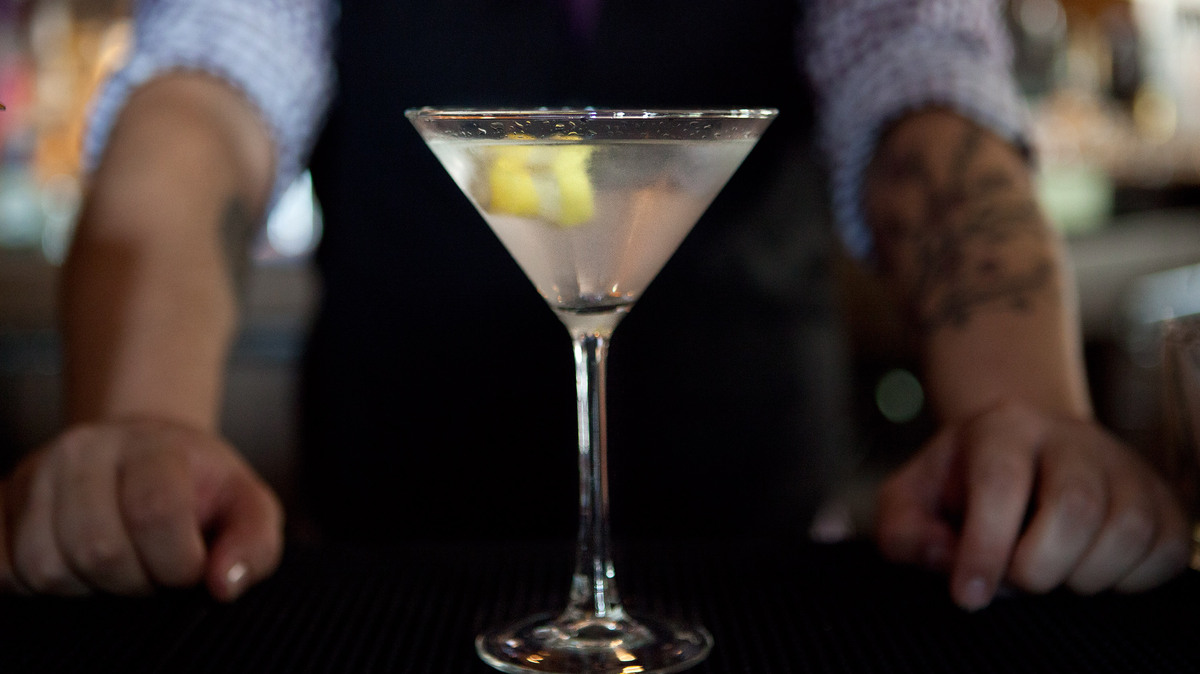 Shaken with splash of malaria drug, please. The original James Bond martini is made with gin, vodka and Kina Lillet, a French aperitif wine flavored with a smidge of the anti-malaria drug quinine.

This week, our colleagues over at the Shots blog have been talking a lot about malaria. And, here at The Salt, that got us thinking about one thing: gin and tonics.

As you probably know, tonic is simply carbonated water mixed with quinine, a bitter compound that just happens to cure a malaria infection, albeit not so well.

Turns out, gin and tonics aren't the only drinks with ties to the feverish disease. If you're sipping an absinthe cocktail or an Italian aperitif this holiday season, chances are you're also imbibing a bit of malaria's history.

Many modern day liqueurs like Campari and Pimm's contain quinine. And absinthe –- that anise-flavored spirit with a nasty reputation –- also has a history with malaria.

Absinthe gets its bitter flavor and alleged psychedelic properties from wormwood, a shrub that's been around since the dinosaurs. Coincidentally, the most powerful malaria drug we have today also comes from a type of wormwood found in China. More on that later. 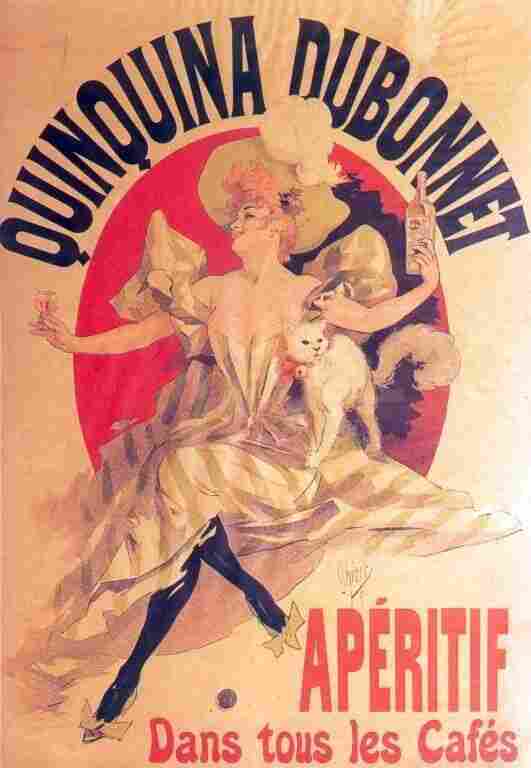 So how in the heck did all these malaria drugs get mixed in with our mixology?

Let's start with the classic: quinine. The bitter compound comes from the bark of the cinchona tree (pronounced sin-KO-neh) in the Andes Mountains of South America.

It's unknown who discovered the fever-curing properties of the cinchona bark, but according to the Kew Royalty Botanical Gardens, Jesuit missionaries figured it out by about 1650, and soon it became the front-line defense for malaria in Europe (which at the time was treated with all kinds of barbaric approaches, like limb amputations and bloodletting).

By the late 1800s, the Dutch were growing the cinchona tree on the island of Java in Indonesia to meet the high-demand for quinine back in Europe, where monks and pharmacists were using the bark to make medicinal tonics.

"Herb liqueurs all started this way," says Amy Stewart, the author of a forthcoming book, The Drunken Botanist, and a specialist in horticulture.

"Apothecaries would soak the herbs and wood in alcohol to extract out the active ingredients and preserve them," she tells The Salt. "Then you add a little bit of sugar to make it taste better, and you have a liqueur."

Stewart says pharmacist and chemists were making concoctions like this for just about every ailment: stomach aches, constipation, kidney stones and even alcohol-induced liver failure.

For malaria, they'd simply add cinchona to the elixirs.

Some of these quinine-spiked liqueurs are still around today, and the malaria drug gives them a characteristic bitter flavor.

There's Lillet, a French aperitif that goes into James Bond's famous martini: "Three parts of Gordon's gin to one part vodka and a half measure of Kina Lillet," he says in Casino Royale.

There's the Italian Cocchi Americano, which is an essential component of the Corpse Reviver, one of the first cocktails designed to cure a hangover.

And, then there's Dubonnet — a sweet, quinine-flavored aperitif beloved by both the Queen Mother and Queen Elizabeth II. And, in the movie The Way We Were, Barbara Streisand drank Dubonnet over ice as Katie Morosky. 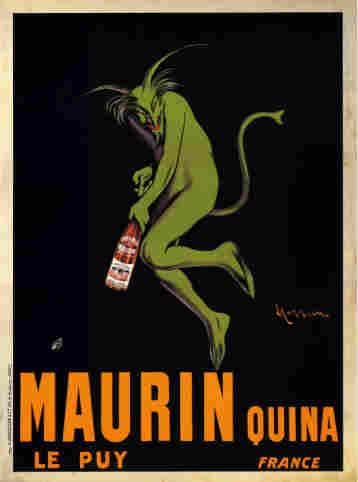 Often mistaken as an ad for absinthe, this 1906 poster actually promotes Maruin Quina, a French aperitif made with white wine infused with cherries, citrus and quinine. Painting by Leonetto Cappiello/Wikimedia Commons hide caption

Dubonnet also shares historical roots with the gin and tonic. They were both concocted as a way to get soldiers to take their malaria medication. Dubonnet helped French troops in North Africa get their quinine while British officers in India cut its bitter taste with gin, carbonated water and twist of lime.

So what about absinthe?

While Europeans and South Americans were messing around with cinchona and quinine, the Chinese had an even more powerful malaria drug up their sleeve --or should we say, in their tea cup.

According to a commentary in the British Journal of Clinical Pharmacology, traditional Chinese doctors have been treating malaria with a tea made from sweet wormwood, or qinghao, for thousands of years. They'd soak the shrub in water and then wring it out to extract the active ingredients.

In the 1960s, Chairman Mao wanted a magic bullet to stop malaria among soldiers in North Vietnam. So he enlisted top scientists to find a new malaria drug from herbs used in traditional Chinese medicine.

It took 14 years and over 50 scientists, but finally the scientists isolated a potent anti-malarial compound from sweet wormwood. It's called artemisinin, and we still use it today.

But a note of caution — artemisinin isn't found in the European wormwood used in absinthe, so a drink of that liqueur wouldn't help with a malaria infection.