Accessibility links
One Airport's Trash Is 2 Million Worms' Treasure : The Salt Many airports send their discarded french fries, burgers and Cinnabons to the landfill. But Charlotte Douglas International plans to transform that garbage into fertilizer for flower beds. All it needed was a couple of million red wiggler worms. 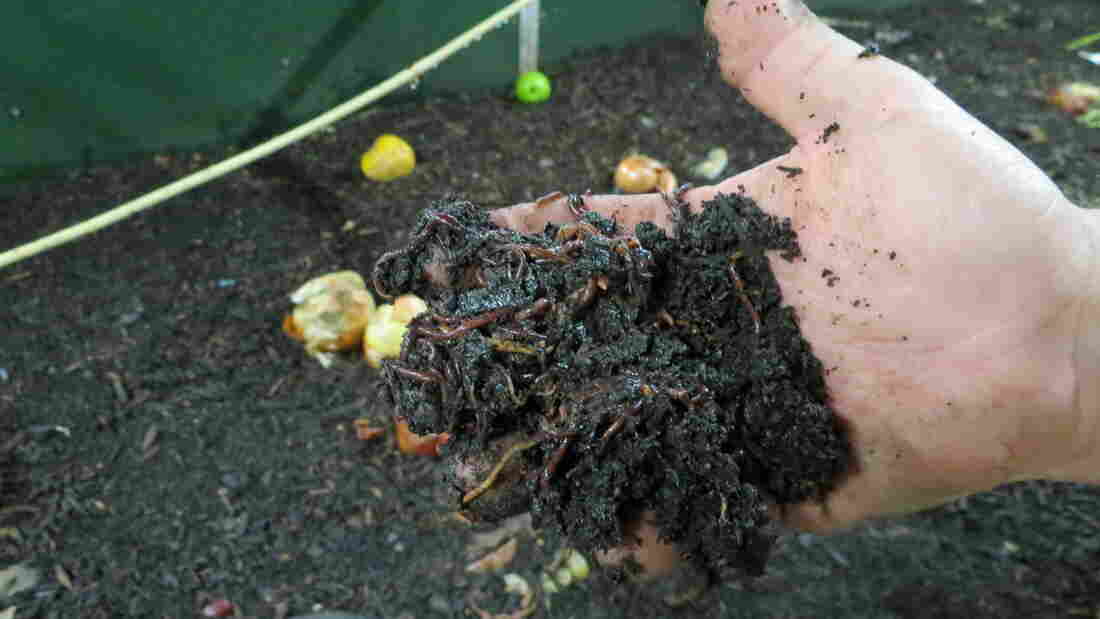 Charlotte Douglas International Airport has deployed an army of 1.9 million worms to eat through its organic waste. The airport has reduced the trash it sends to the landfill by 70 percent. Julie Rose hide caption 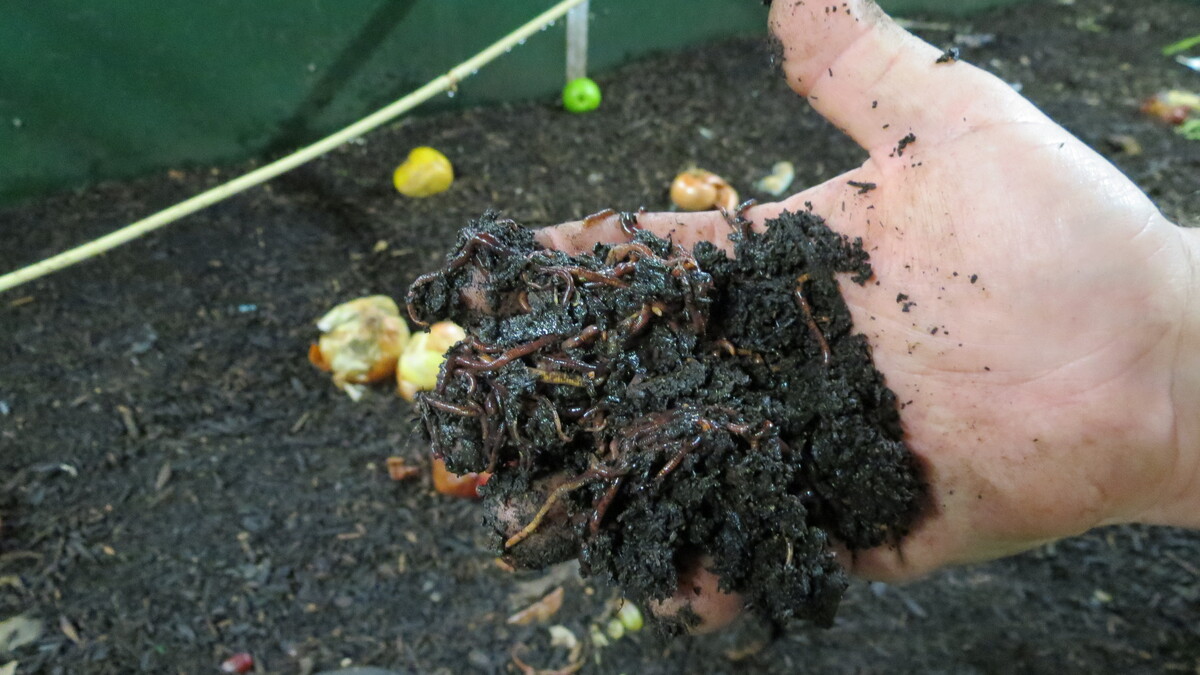 Charlotte Douglas International Airport has deployed an army of 1.9 million worms to eat through its organic waste. The airport has reduced the trash it sends to the landfill by 70 percent.

Food waste is not just a problem for restaurants — airports also have to deal with piles of this kind of garbage.

At one of the nation's busiest airports, Charlotte Douglas International in North Carolina, each passenger generates half a pound of garbage on average per visit. But instead of just sending all that trash to the landfill, Charlotte has taken a different approach. It's the first airport to put worms to work dealing with trash.

Before the worms get a whack at the airport waste, there's some human work required. Twenty-five tons of trash a day tumbles onto a conveyor belt under the supervision of Charlotte Airport housekeeping manager Bob Lucas.

"You see it coming down off the cascade up there," Lucas says. "What that does is, it gives it like a waterfall effect. So it spreads it out on the belt a little bit more."

A dozen employees pluck out recyclables and sort through aluminum, plastic and more, so passengers don't have to do the sorting in the terminal.

In the four months since this operation got under way, trash going from the Charlotte airport to the landfill is down an impressive 70 percent. Recyclables are crushed, baled and sold for cash. There are shirts sorted and laundered and donated, and plastic cups collected. (The shirts come from people who toss clothing when they suddenly discover their suitcases are too heavy.)

The organic stuff — waste from airport restaurants, food scraps off planes, and the half-eaten Cinnabon that a traveler has tossed out — mixes in a big tank for a few days to start the composting process. Then it's time for the stars of this show to take over.

"There's the workers," Lucas says, digging his fingers into the top layer of a 50-foot-long composting bin, "1.9 million of them."

They are common backyard red wigglers, about 3 inches long, a quarter-inch around — and hungry. Lucas says they eat half their weight a day. 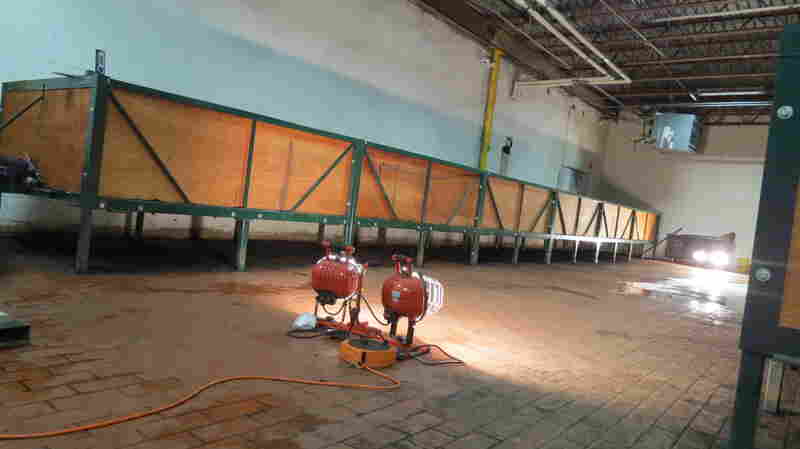 Organic waste ends up in a series of 50-foot beds where the worms do their work. Castings (aka worm poop) fall through a screen at the bottom of the bed and will be used as fertilizer on airport grounds. Julie Rose hide caption 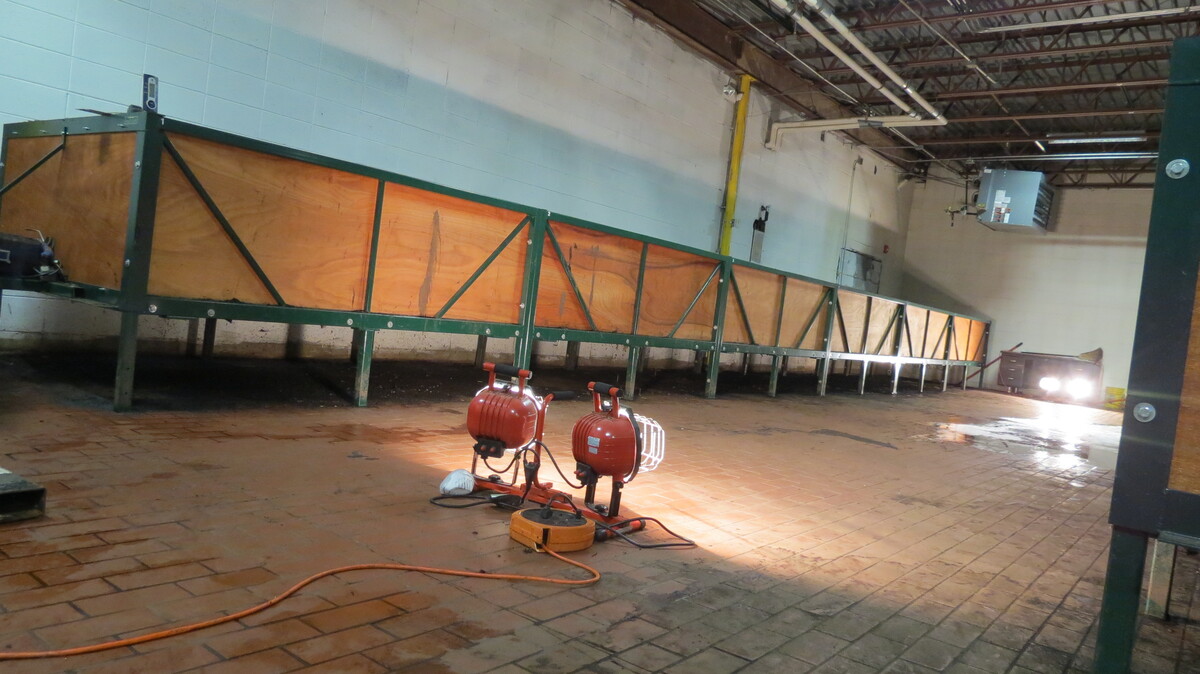 Organic waste ends up in a series of 50-foot beds where the worms do their work. Castings (aka worm poop) fall through a screen at the bottom of the bed and will be used as fertilizer on airport grounds.

"I have not heard of another airport that does that," says Katherine Preston, environmental affairs director for Airports Council International-North America.

And that's with good reason. First of all, recycling and worm composting take space many airports don't have.

Plus, worms are finicky and — as Lucas recently learned — prone to crawling out en masse at times. That resulted in a panicked call to the guy who sold him the worms.

"First thing I told him: 'They're trying to leave.' And he said, 'Get a light and stick it under the bed.' And they just turn around and go back in and they're happy," Lucas says.

Light on. Crisis averted. If Lucas can keep the worms happy, they'll soon be producing enough worm poop to fertilize all of the airport's flower beds and shrubs, Lucas says.

Worm poop. Go ahead and giggle. Charlotte officials sure did as they debated the $1.2 million it cost to launch the program. But they're not laughing now: The airport expects to be making money off its trash in five years.