Accessibility links
Survived The Mayan Apocalypse? Here Come The Radish People : The Salt Each Dec. 23, they descend upon Oaxaca's main plaza: giant root vegetables carved into human figures and other vivid forms. The Night of the Radishes is a major tourist draw these days, but it all started with Spanish missionaries in the 1500s. When a new religion and imported crops met indigenous woodcarvers, a novel art form was born.

While the rest of the world was in a tizzy over the Mayan apocalypse that wasn't, the residents of Oaxaca, Mexico, were busy preparing for the very real Coming of the Radish People. 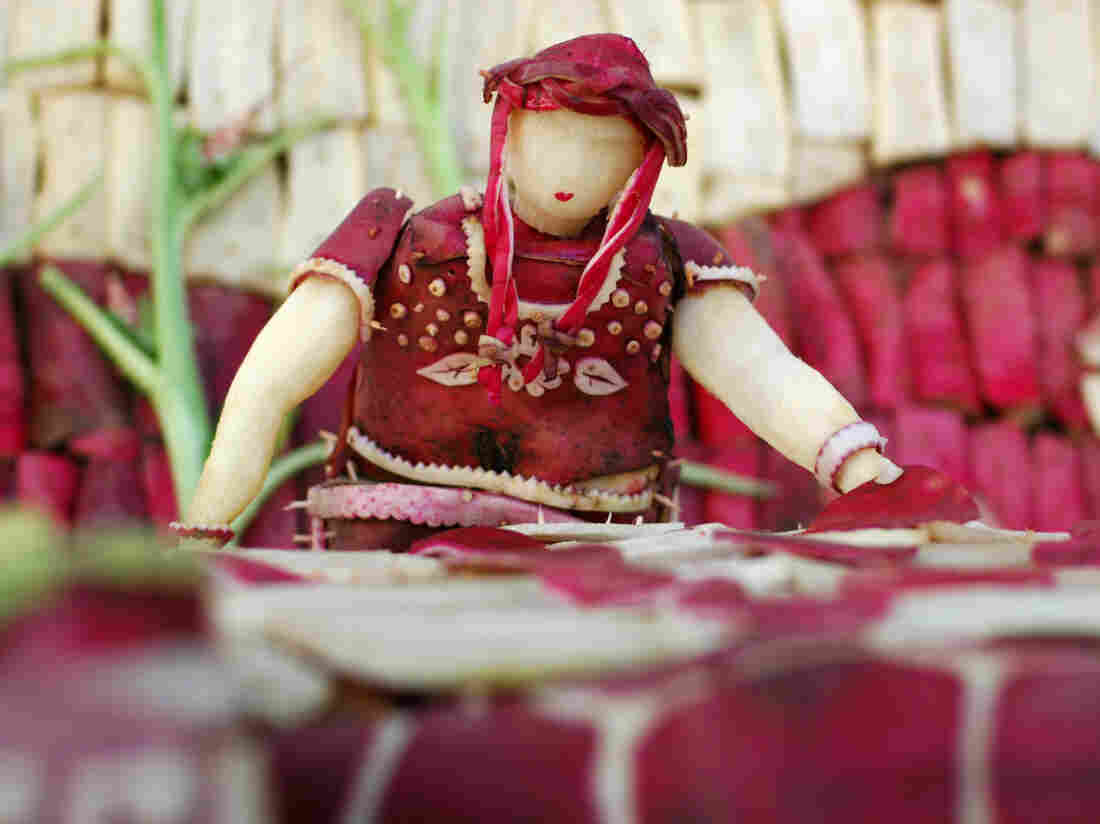 This Sunday, they will descend upon Oaxaca's zocalo, or main plaza: giant root vegetables carved into human figures and other vivid forms.

Don't panic. This isn't some revenge-of-the-radish scenario. It's a sculpture contest. La Noche de Rabanos – Night of the Radishes – is a Christmastime Oaxaca tradition that marks its 115th anniversary this year.

Every year on Dec. 23, artisans from around the region show up early in the morning to set up stalls in the plaza and put the finishing touches on elaborate sculptures carved from radishes — not the petite, round ones we're used to in this country, but big, heavy radishes — some as big as 6 pounds and 20 inches long. More than 100 people have signed up to compete in various categories in this year's contest, according to the Mexican daily El Universal. They'll be working with some 10 tons of raw material. 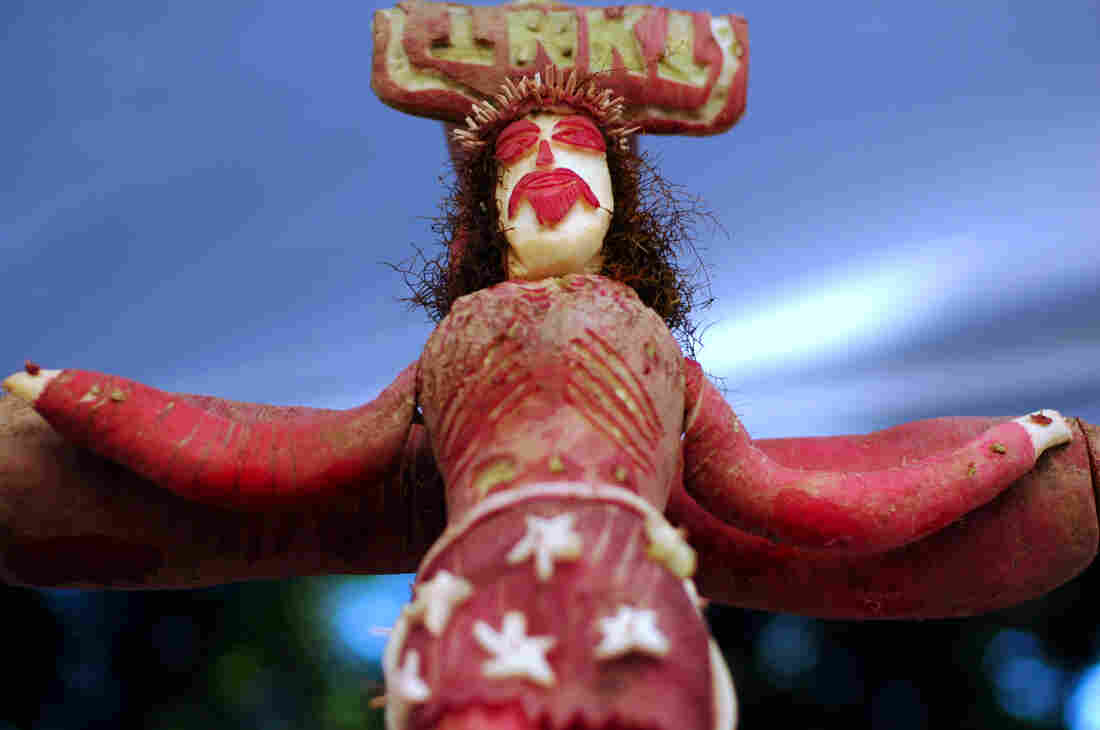 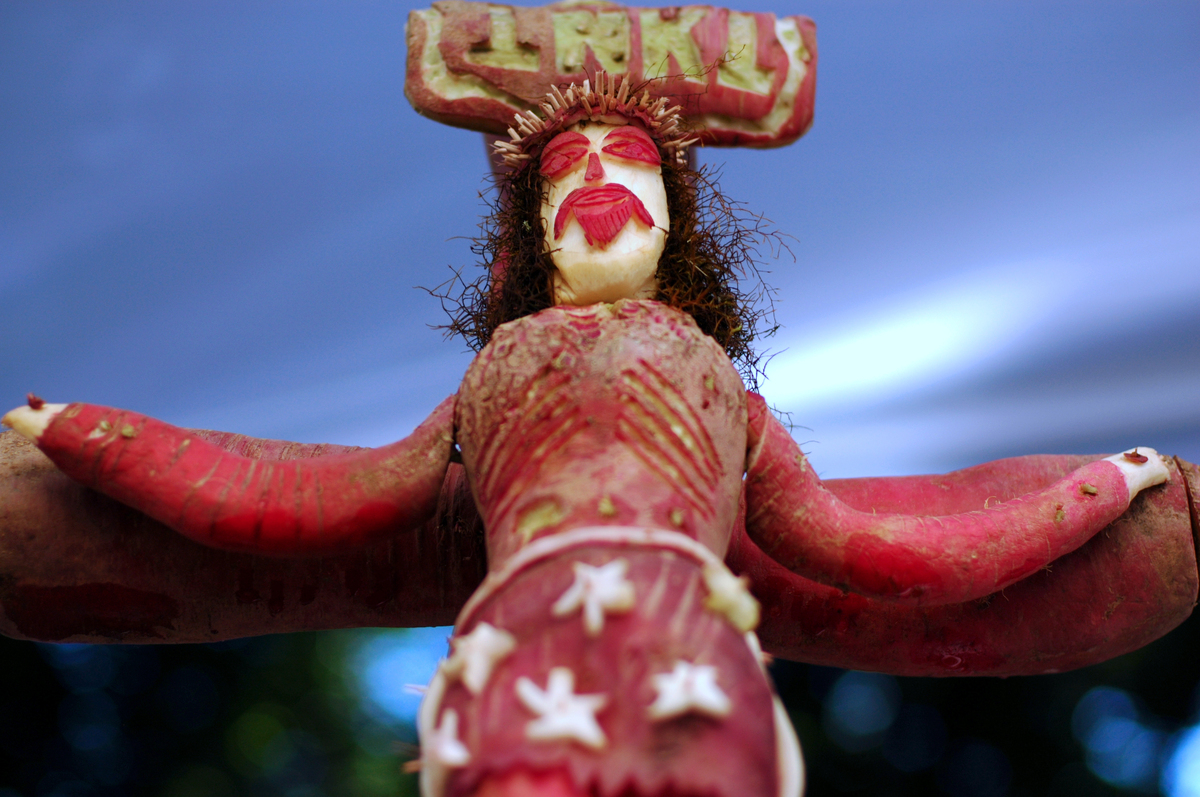 "It's sort of the spirit of the 4-H fair. You know, who has the biggest pumpkin or the biggest pig," says Tanya Kerssen, a researcher with Food First who has led food heritage tours of Oaxaca.

Given the timing, a lot of the sculptures are religiously themed: You'll find plenty of nacimientos, elaborate manger scenes depicting the birth of Jesus — a popular tradition in Latin America. 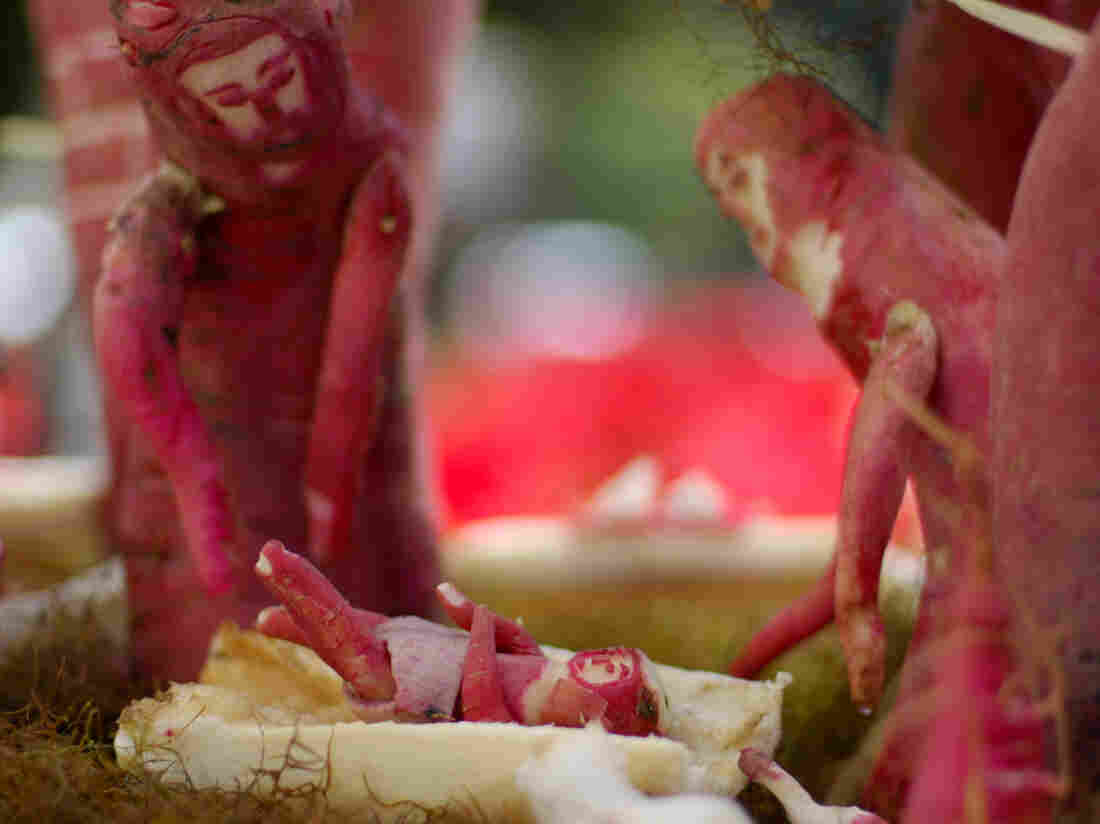 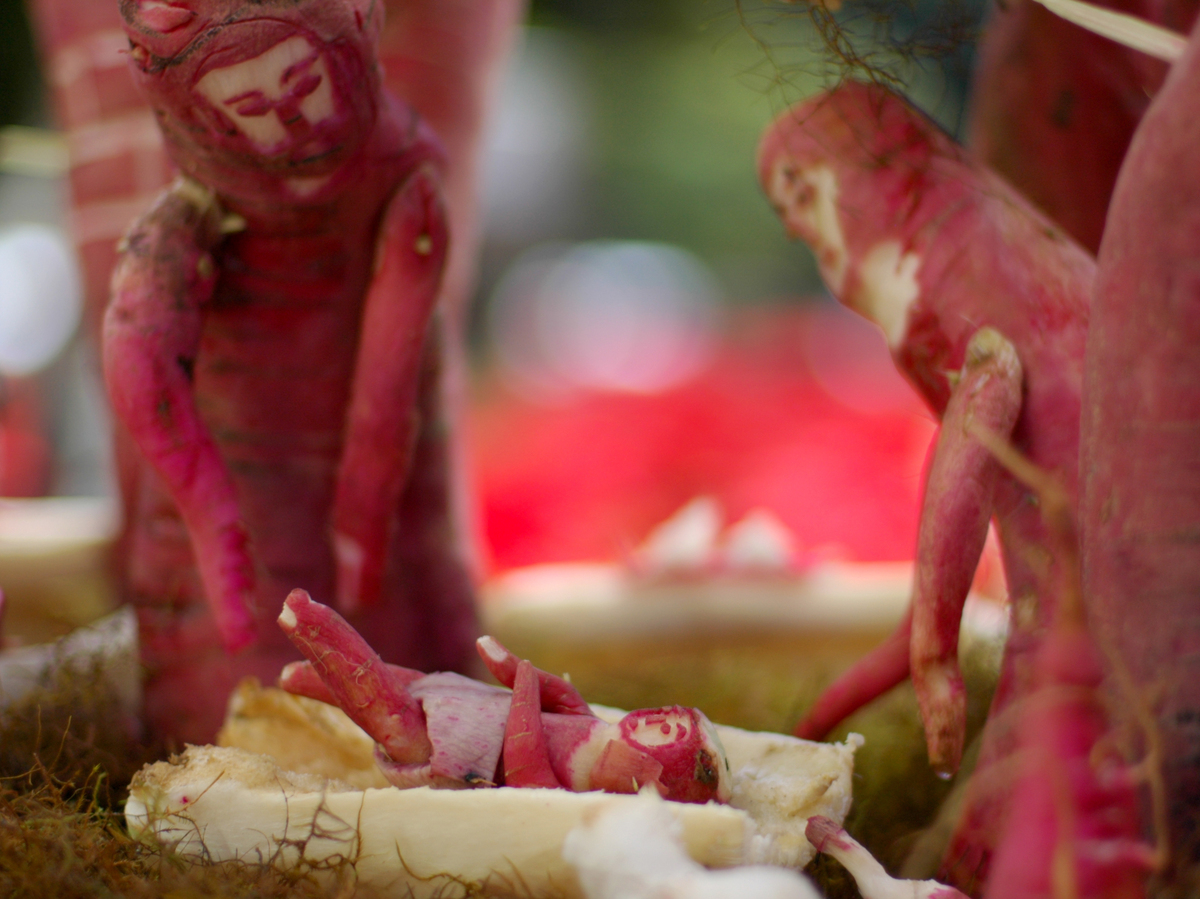 But there are also some distinctly secular visions. (Hmm ... Is that you, Mr. Bill?) 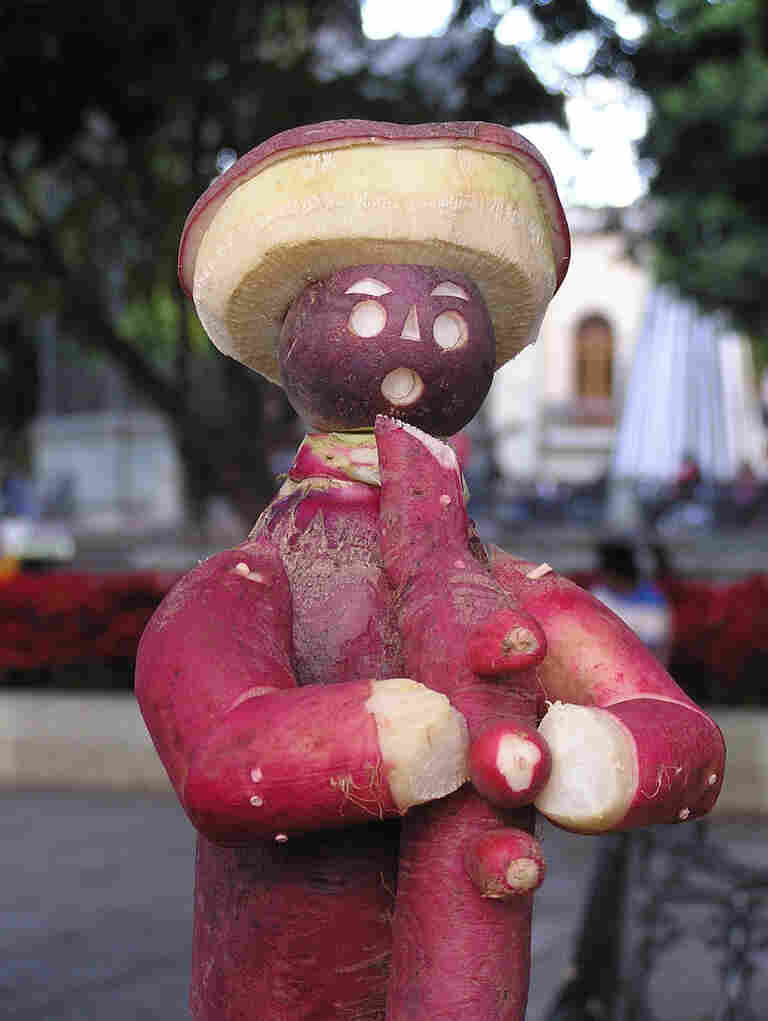 So how did carving up an edible root native to China become a beloved Oaxaca tradition?

"The whole thing began with the Spanish, mostly the priests," says Iliana de la Vega, the chef-owner of San Antonio's El Naranjo Restaurant, who has deep family ties to Oaxaca and has documented Mexican foodways.

When Spanish missionaries arrived in Oaxaca in the 16th century, they were recruiting converts not just to Christianity but also to the crops they'd brought along — including radishes, de la Vega says. As lore has it, the indigenous locals already had a pretty strong wood-carving tradition, so the Spanish said, hey, why not carve these radishes?

Eventually, the story goes, ravishing radish displays became a common marketing ploy — a way for farmers to catch the eyes of shoppers browsing stalls at the market in the town plaza. Oaxaca's mayor formalized the exhibitions in 1897, and cash prizes followed.

These days, the Night of the Radishes is serious business. Contestants register months in advance, and local authorities oversee the growing and harvesting of the radishes to make sure no one gets an unfair advantage. And there's serious money at stake: Last year's winner reportedly took home 15,000 pesos, or roughly U.S. $1,173 at the current exchange rate.

You might still fetch a little cash if yours loses — people like to buy them and take them home for holiday centerpieces.

Over the years, the event has become a major draw for tourists from around the world. When she was a little girl, de la Vega recalls, she and her family would run down to the market, check out the stalls and head back. "Now," she notes, "you've got to wait in long lines."