Accessibility links
Christmas A Busy Season For Tamale-Makers : The Salt Tamales are a holiday tradition for many Latinos. Some families will make their own. But others turn to tamaleros, tamale-makers who can churn out hundreds of tamales a week that taste even better than homemade. 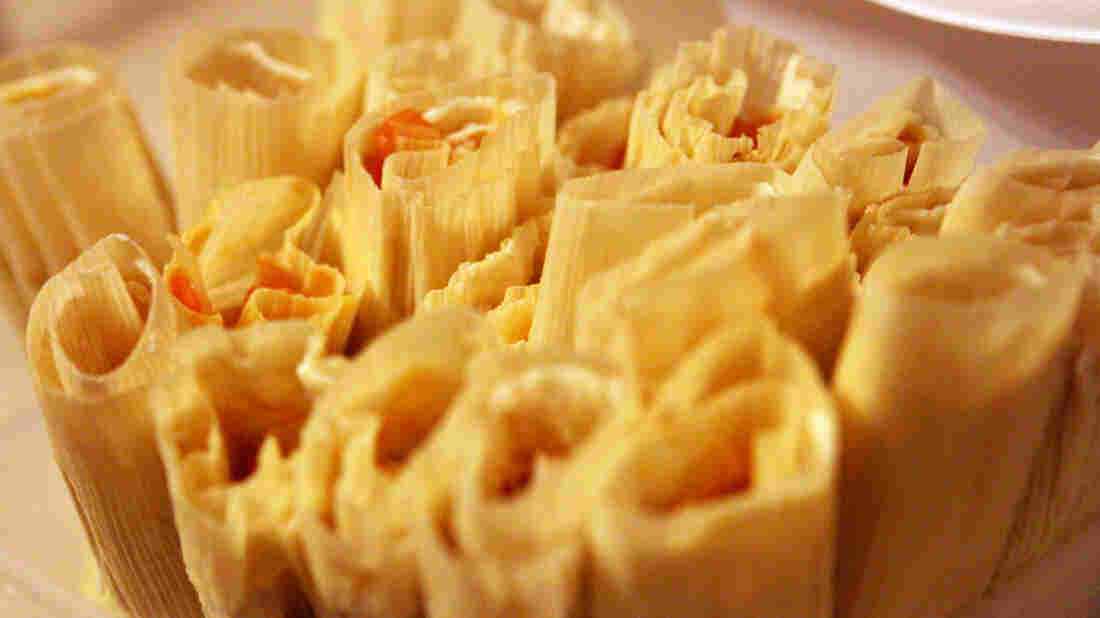 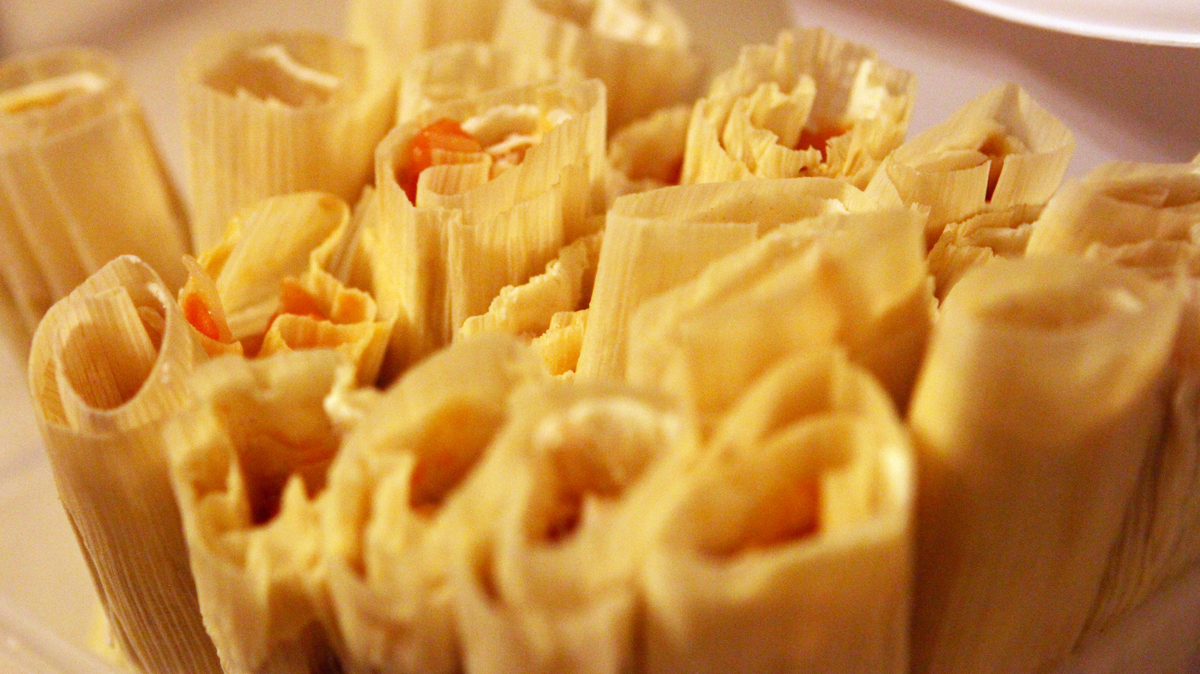 For Christmas, Central and Mexican-American families don't crave a holiday turkey; they want a plate of steaming hot tamales.

Gustavo Arellano, author of the book Taco USA: How Mexican Food Conquered America, says that to him, tamales are more than food. They transmit Latino culture during Christmas. 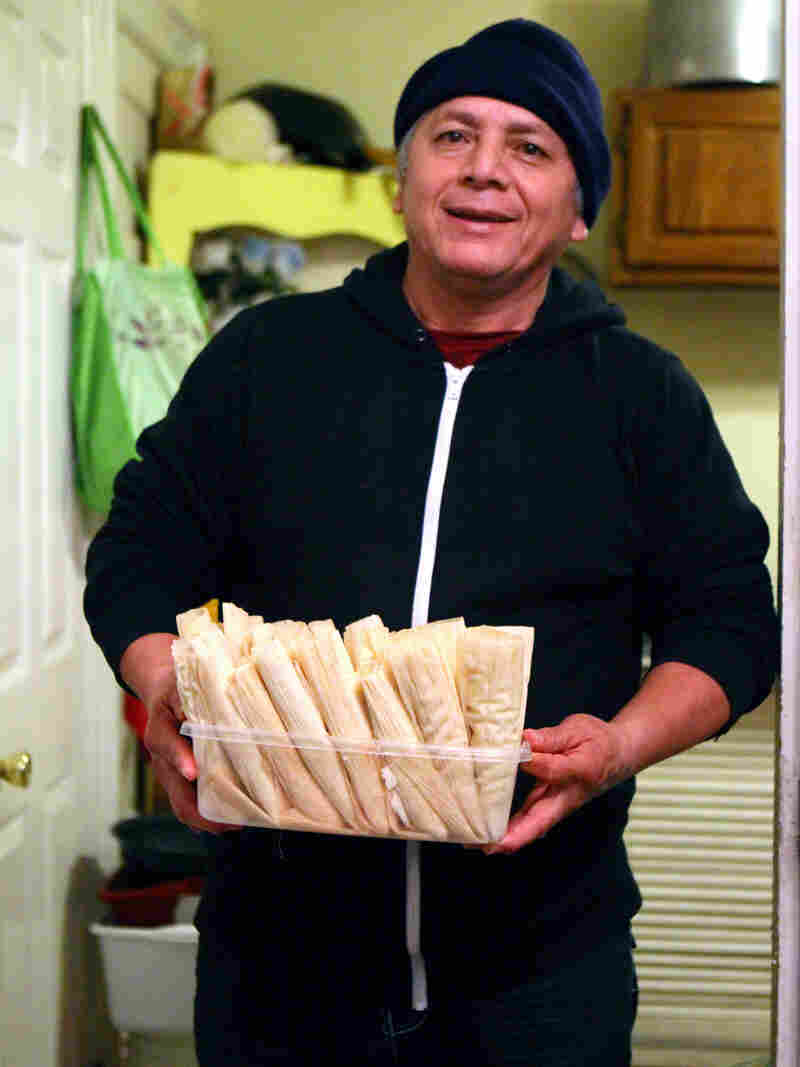 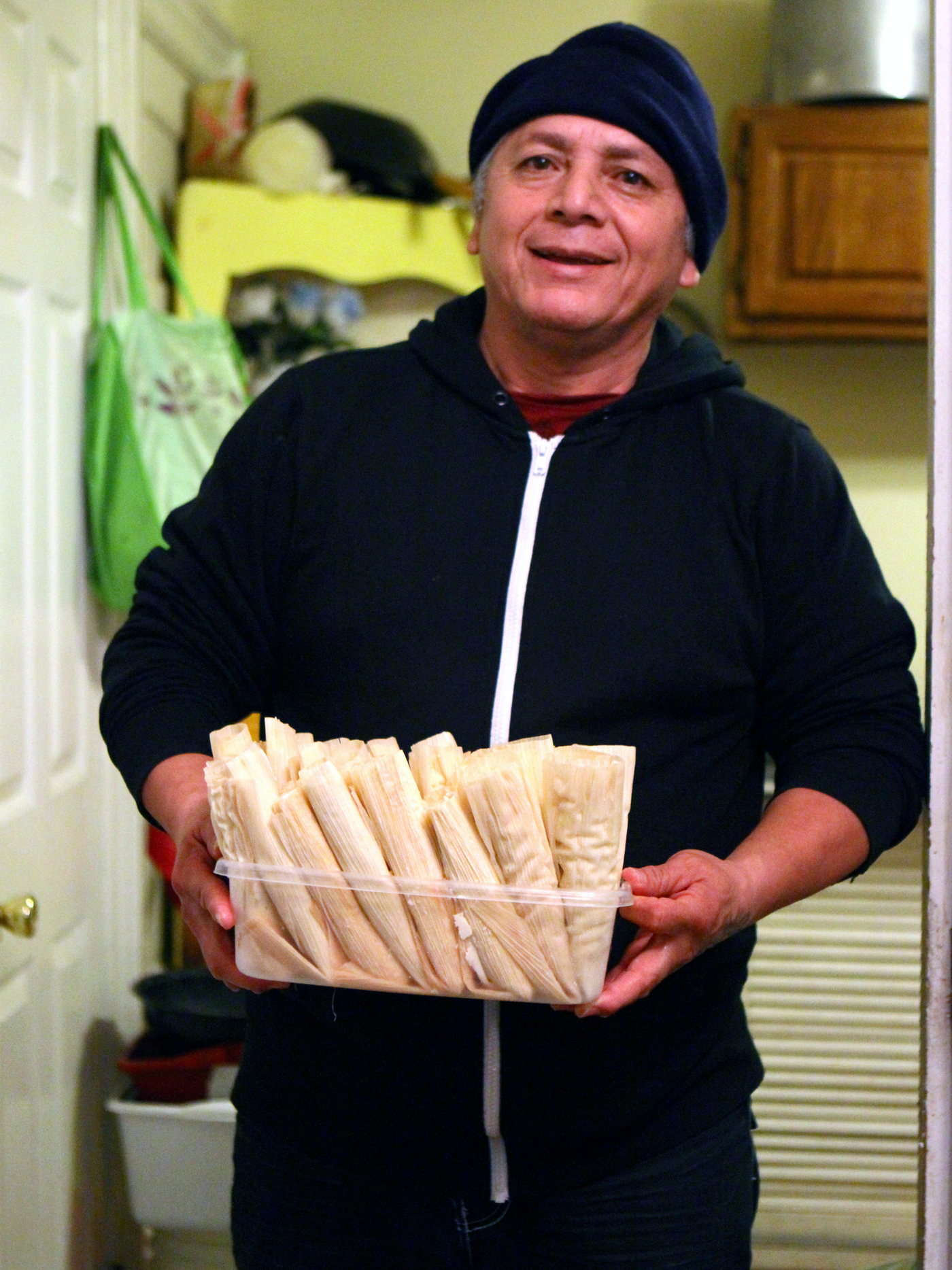 Ofelio Crespo makes tamales in his home all year, but December is particularly busy.

But making tamales is a time-consuming endeavor. It can take a whole day to make a single batch. That's why many families prefer to buy tamales in bulk for special occasions.

Good tamales, though, don't come from a restaurant. They have to be caseros, that is, homemade. And so many families turn to tamaleros — men and women who make tamales for a living — to get their fix.

Ofelio Crespo is a tamalero who lives in Washington, D.C. He is usually out of bed by 5 a.m. and spends his mornings making gallons of salsa on his stove to pair with his tamales.

He makes a red salsa for chicken tamales. The vegetarian option uses hot peppers and cheese. But his specialty is the green salsa he cooks for pork tamales — it's a mix of jalapeno peppers, poblano chilies, onions, garlic and spices.

Crespo grills the meat at night and prepares the tamales with his family in the evening after making his deliveries. The kitchen has a second refrigerator to keep the ingredients fresh. A big bowl of cornmeal dough called masa sits in the middle of the dining room table. The stove is on all day.

Assembling the tamales is an art form. Crespo starts by washing the cornhusks that will encase the tamales in the kitchen sink. He then takes a golf-sized ball of dough from the bowl, flattens it with a tortilla press and beats it down onto the cornhusk. He puts meat and salsa in the middle of the masa and folds the tamale in place.

He and his children do this approximately 900 times a week.

Tamales are a comfort food for Central and Mexican-Americans, and recipes vary from region to region. In Michoacan, they come in triangles. In Oaxaca, they're made with beans. Tamales salvadorenos are wrapped in banana leaves instead of corn. 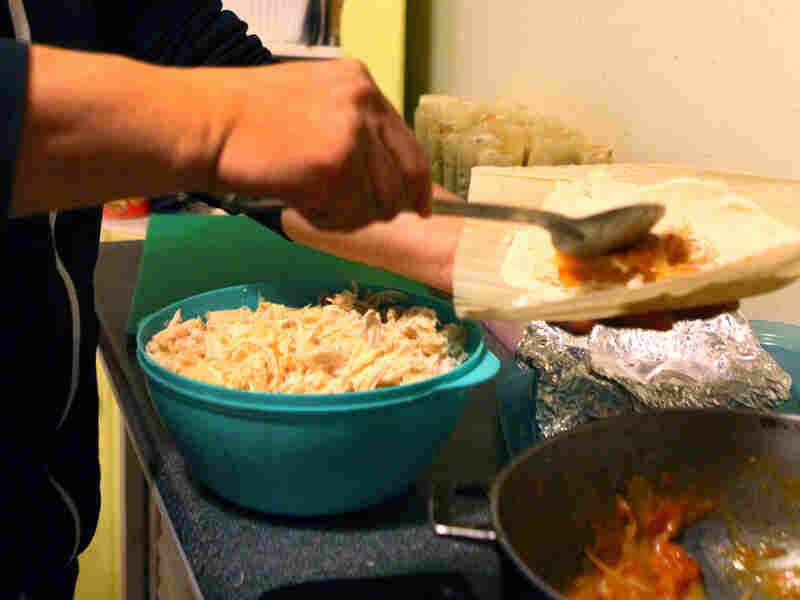 Crespo assembles tamales in his kitchen in the evening. Lauren Rock/NPR hide caption Crespo assembles tamales in his kitchen in the evening.

Crespo's tamales are in the style of the Mexican southern state of Guerrero where he was born. He sells them all year, but December is his busiest month. The Feast of Our Lady of Guadalupe on Dec. 12, Nochebuena on Dec. 24 and New Year's Eve wouldn't be complete without tamales.

There might also be another factor in their popularity. "We get more people asking for tamales because it's colder outside. People want something hot in their stomachs," says Crespo's 20-year-old-son, Romelio, who, along with his younger sister Maria, helps his dad with the cooking.

Crespo started making tamales for friends in his church group eight years ago. After a few months, he was getting big orders on a regular basis. His primary client base remains the Spanish-speaking congregation in his church, but Crespo says he is always getting referrals.

Many higher-class families who move to the U.S. find that a family cook is no longer in their budget. They still crave traditional food, but they might not know how to make it themselves. That is when the door opens for Crespo and other tamaleros.

The tamale market is usually an informal network that expands by word of mouth. But Crespo wants his business to grow. He's getting financial counseling and plans to rent out an industrial kitchen and later buy a food truck he'll name "Mexican Cowboy Tamales."

Some families come together for tamaladas, tamale-making gatherings. But Crespo insists his tamales have sabor, a special taste. No one makes tamales like his, he says. And once you taste them, you won't even try.