Accessibility links
'Canadian Peanut Butter' Connects Mainers To Their Acadian Roots : The Salt OK, so cretons are not really peanut butter. They're more like a rustic spiced pork or turkey pâté sold mostly around the holidays at meat markets and small grocery stores in Maine. 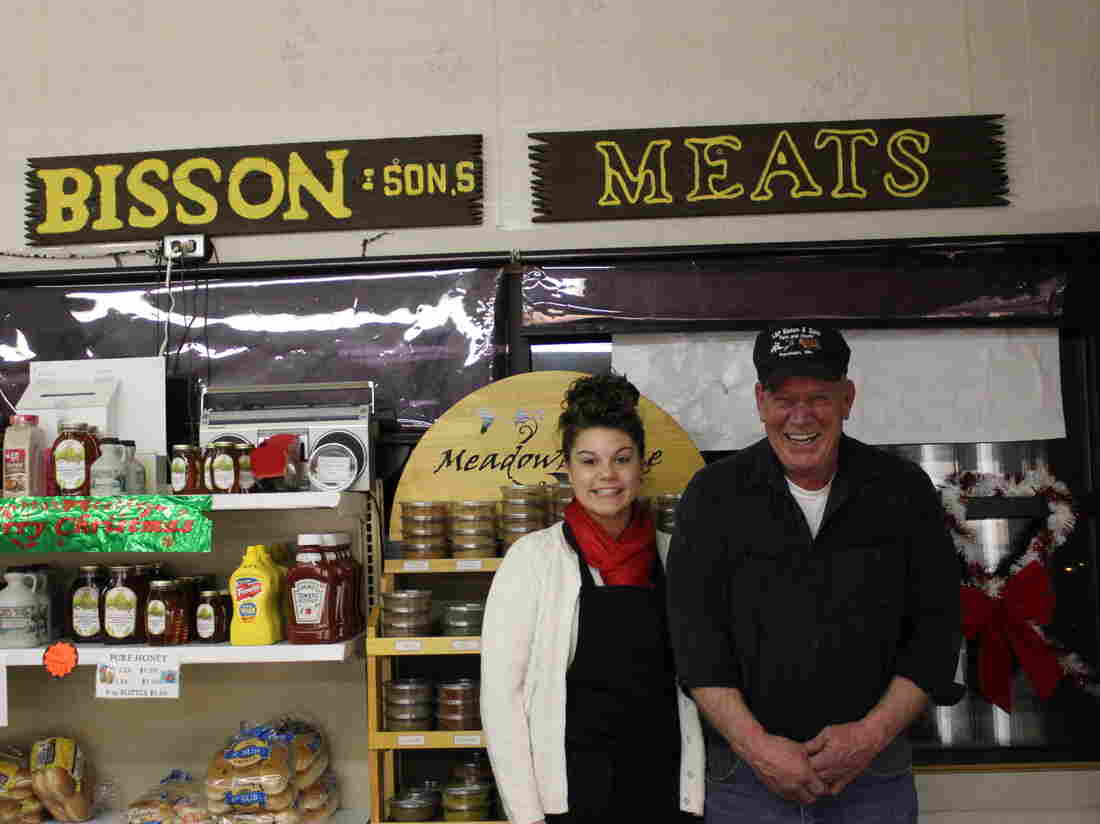 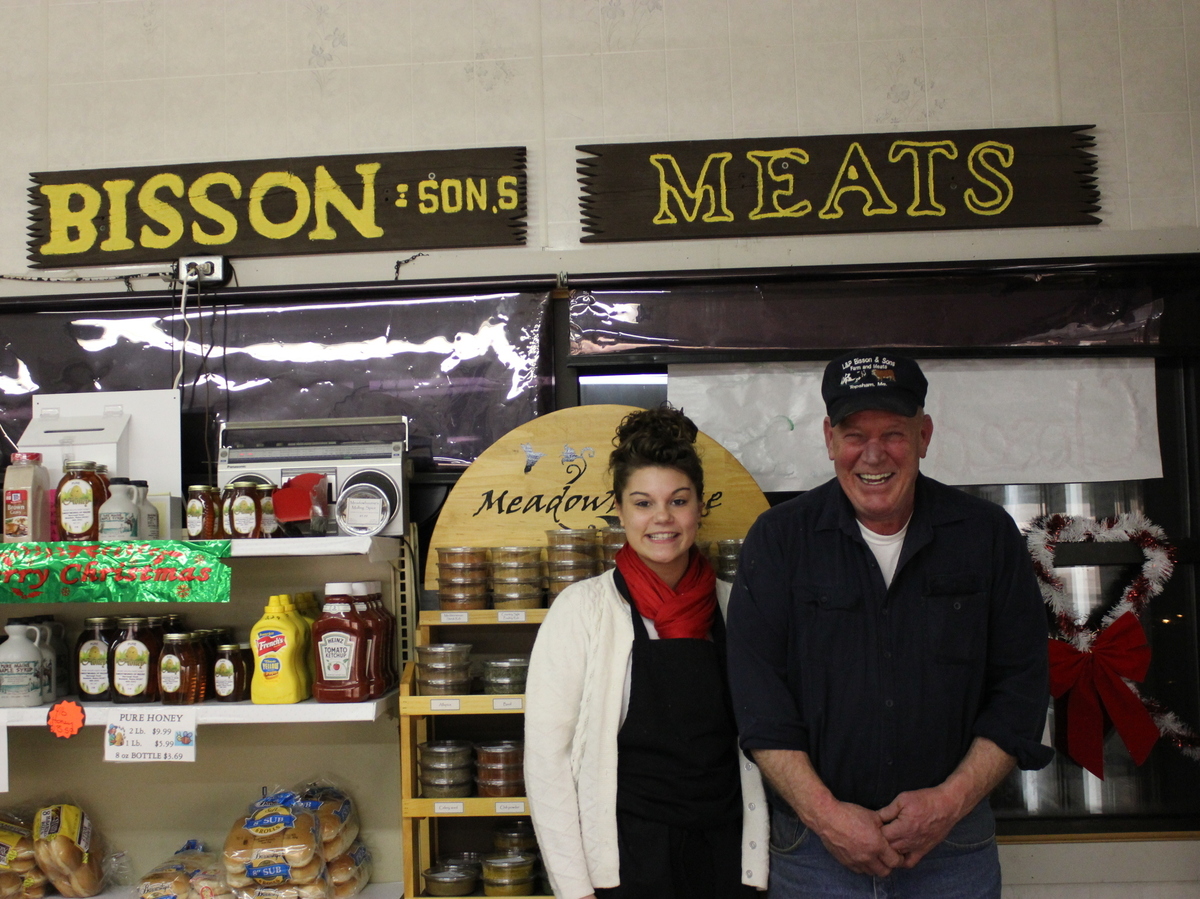 Robert Bisson of Bisson and Sons Meat Market in Topsham, Maine, with his granddaughter. The butcher shop sells traditional cretons during the holidays.

Last Christmas, we told you about tourtières, the savory meat pies Canadians serve around the holidays. Now, we bring you cretons, a Québécois delicacy found throughout Canada and parts of New England this time of year.

In Maine, French-Canadians are the largest ethnic group — about a quarter of the population. But many here no longer speak French and are forgetting their family history. At Christmastime, some Mainers reconnect with those fading cultural roots by making cretons, a spiced pork pâté similar to the trendier French spread, rillettes. It's like a spreadable scrapple, as central to French-Canadian cuisine as chopped liver is to Eastern European Jews.

Portland, Maine is famous for its restaurants, but not overtly Franco-American ones. Chef Nate Nadeau, at the helm of the popular Fore Street, recently cooked a French-Canadian pop-up brunch here, serving poutine (Canadian-style fries and gravy) as the salad course and eggs paired with cretons.

"With food industrialization, a lot of the connections between people's food and their heritage have been lost," explains Nadeau, whose family ran a fried fish restaurant in New Hampshire when he was a child. "They're not that far away. They're right there. You just have to go back a generation or two." 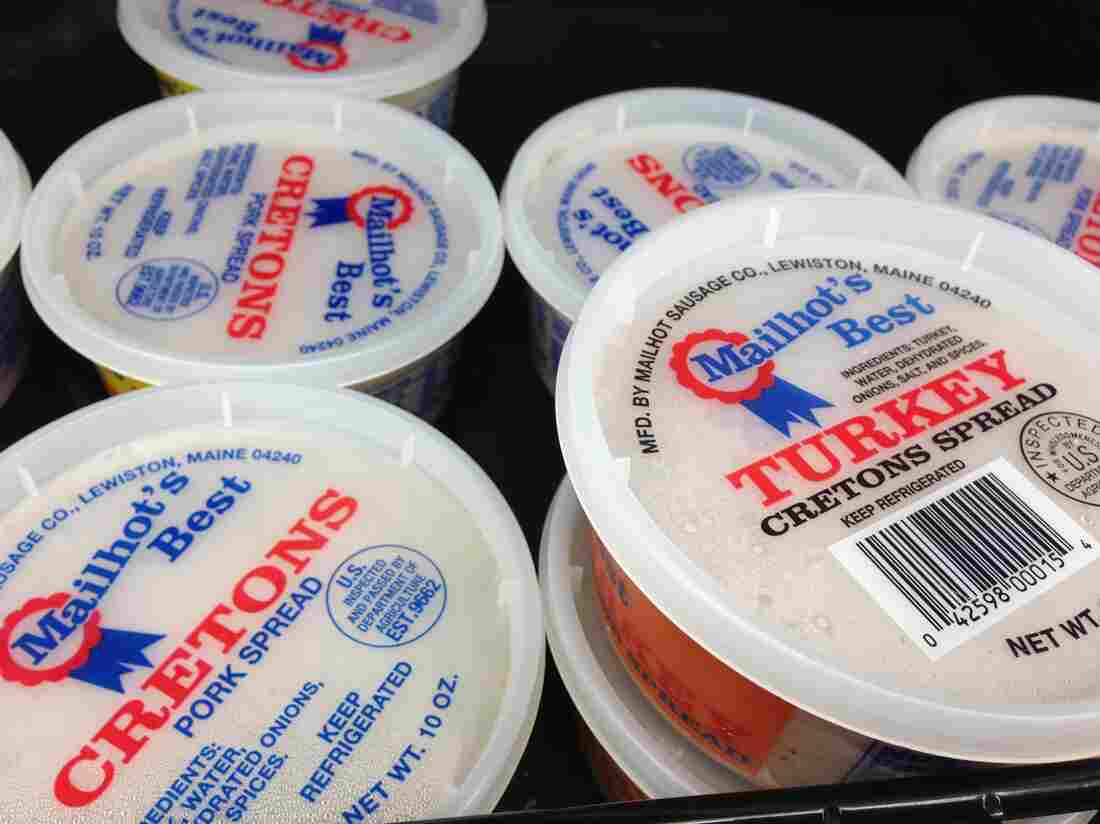 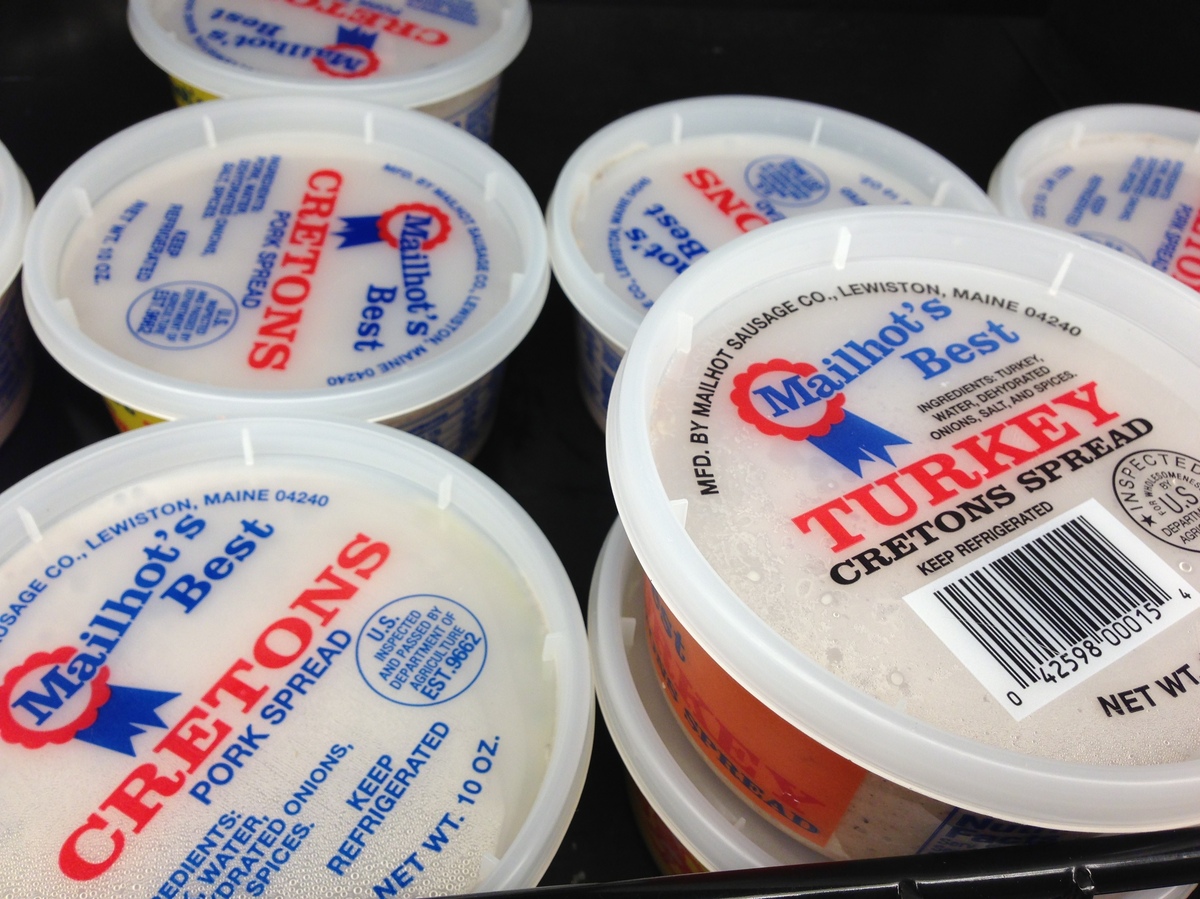 Mailhot's of Lewiston, Maine, makes both pork and turkey cretons.

Cretons, also known as gorton or corton, turns up at supermarkets and butchers shops throughout Maine and in neighboring Acadian states. The biggest US producer is mom-and-pop Mailhot Sausage Co., which makes cretons with ground pork loin or turkey, for a lower-fat version. Marc Mailhot's great-grandfather started the business in 1910, after migrating to Lewiston with the thousands of French-Canadians who came to work the mills here.

"It's the Canadian peanut butter," Mailhot says. "There's just shelves of the stuff there."

Traditionally, mill workers spread cretons with mustard on sandwiches instead of baloney. Many still butter their breakfast toast with greasy cretons instead. Others spread it on Saltine crackers or stuff it into puff pastry or mushrooms for hors d'oeuvres. But few agree on how to make cretons.

Every Franco-family has a different approach. Anne Tessier-Talbot, who runs a popular wine shop in Brunswick, swears by her father Hervey's recipe. She browns twice-ground pork shoulder (others use the butt) before adding grated onions, minced garlic and cinnamon, allspice and cloves (think pumpkin pie or mincemeat spices). Then, Tessier-Talbot pours in milk, to break down the proteins, and covers the pork with water to simmer for hours. The result, when chilled, is her family's Christmas spread. Her mémère even combined cretons with mashed potatoes as the filling for her tourtières, the popular meat pies.

Recipe adapted from Anne Tessier-Talbot of Tess' Market in Brunswick, Me. Also inspired by Robert Bisson of Bisson & Sons Meat Market in Topsham and Michael Sanders, author of the Fresh from Maine cookbook. You can vary the spices according to personal preference. Tessier-Talbot's father, Hervey, used to wrap whole cloves, allspice and a cinnamon stick in cheesecloth to simmer with the pork, discarding the bouquet when it was done. In addition to those listed below, some use nutmeg, ginger or crushed red pepper. Tessier-Talbot serves her spread with mustard and a sprinkle of garlic salt on top. 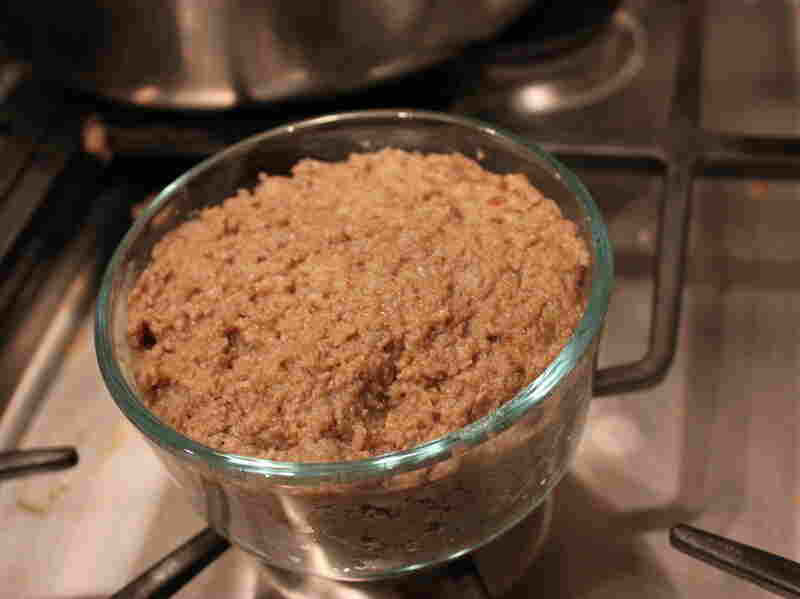 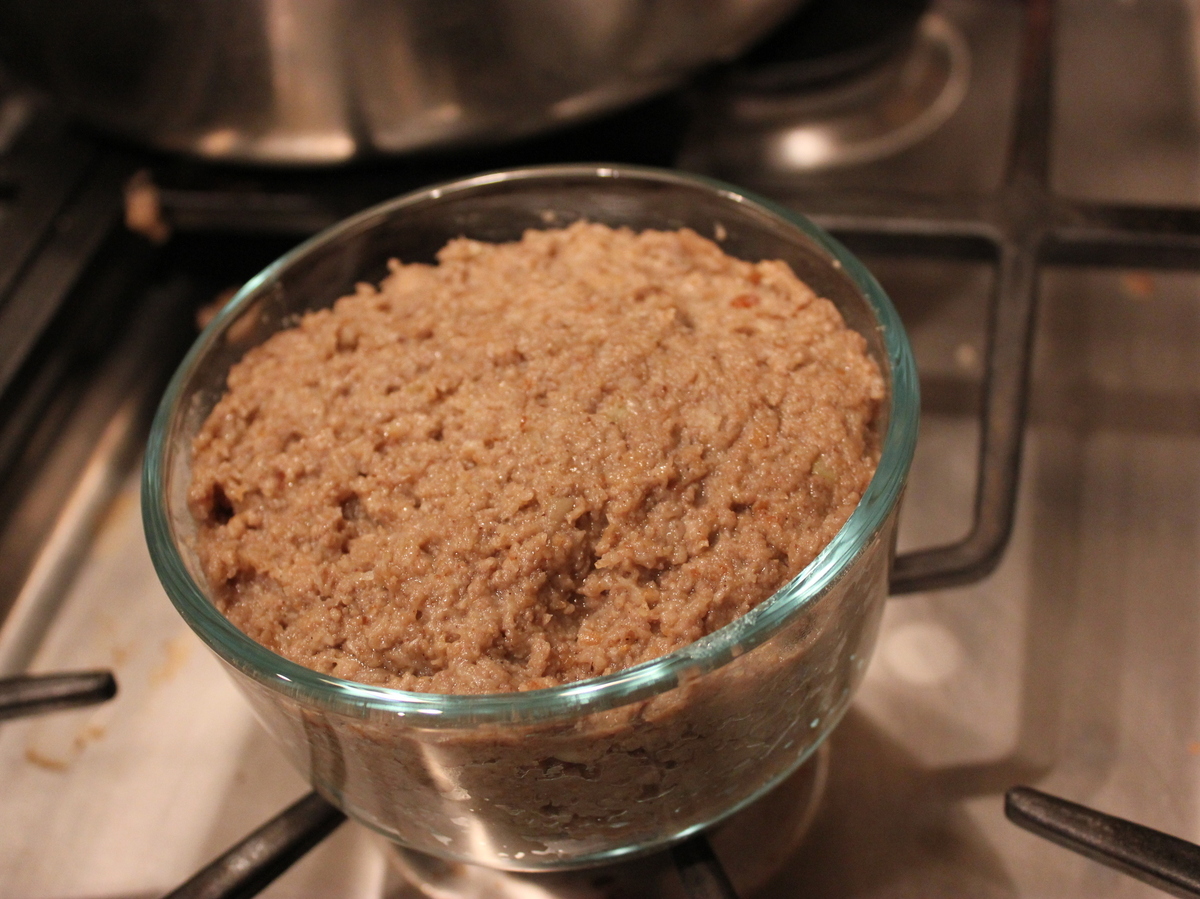 1 pound ground pork (from the butt, shoulder, loin or other scraps. Ask your butcher to finely grind it twice, if possible).

3/4 cup grated onions, including some of their juice

½ teaspoon salt, or more to taste

Up to 1 cup bread crumbs (optional, Tessier-Talbot prefers without for more spreadable pate)

Add the pork to a deep sauté pan or stock pot over medium-high heat. No oil is necessary because the pork will release some grease. Brown until the pork is no longer pink, stirring. Then stir in onions and garlic.

Stir in spices, salt and pepper, and milk and breadcrumbs, if using.

After sautéing for about 10 minutes, add enough water to just cover the pork. Turn down to low heat, cover with lid askew to let steam escape, and simmer for two to four hours. Stir pot occasionally, smashing meat mixture against side of pot to form a smooth pate and prevent clumps. Taste and add more salt or seasonings as desired.

Remove from heat, pour off a little remaining liquid (if desired) and spoon into ramekins or glass bowls, smoothing the top with a rubber spatula. Cover with plastic wrap and refrigerate until well-chilled, at least several hours.

Serve spread on bread or crackers, with Dijon mustard and a pinch of garlic salt, if desired. Garnish with cornichons or other pickles.