Accessibility links
Smartphone Apps Offer Few Shortcuts For Those With Food Allergies : The Salt Plenty of apps promise to make life easier for people with life-threatening allergies to nuts and other foods. One scientist even invented a smartphone-based lab to detect potential allergens. But asking "Does that have nuts in it?" may actually be a better and safer option than pulling out your phone.

Smartphone Apps Offer Few Shortcuts For Those With Food Allergies

Smartphone Apps Offer Few Shortcuts For Those With Food Allergies 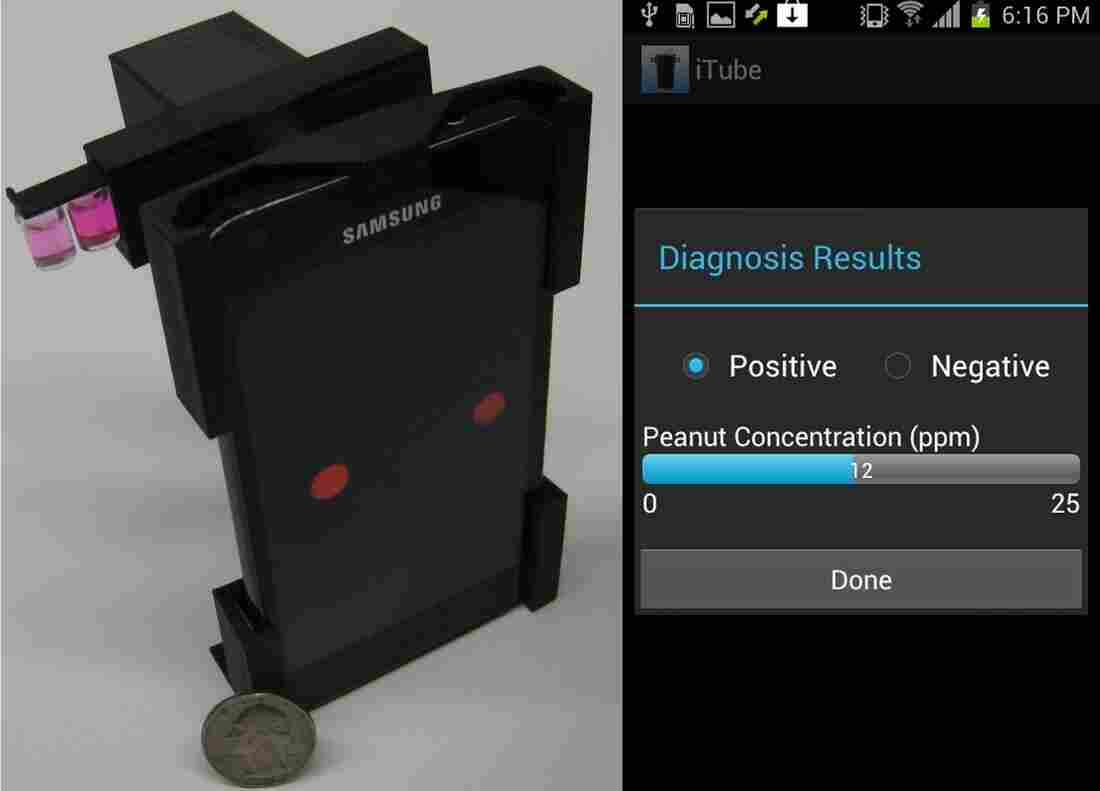 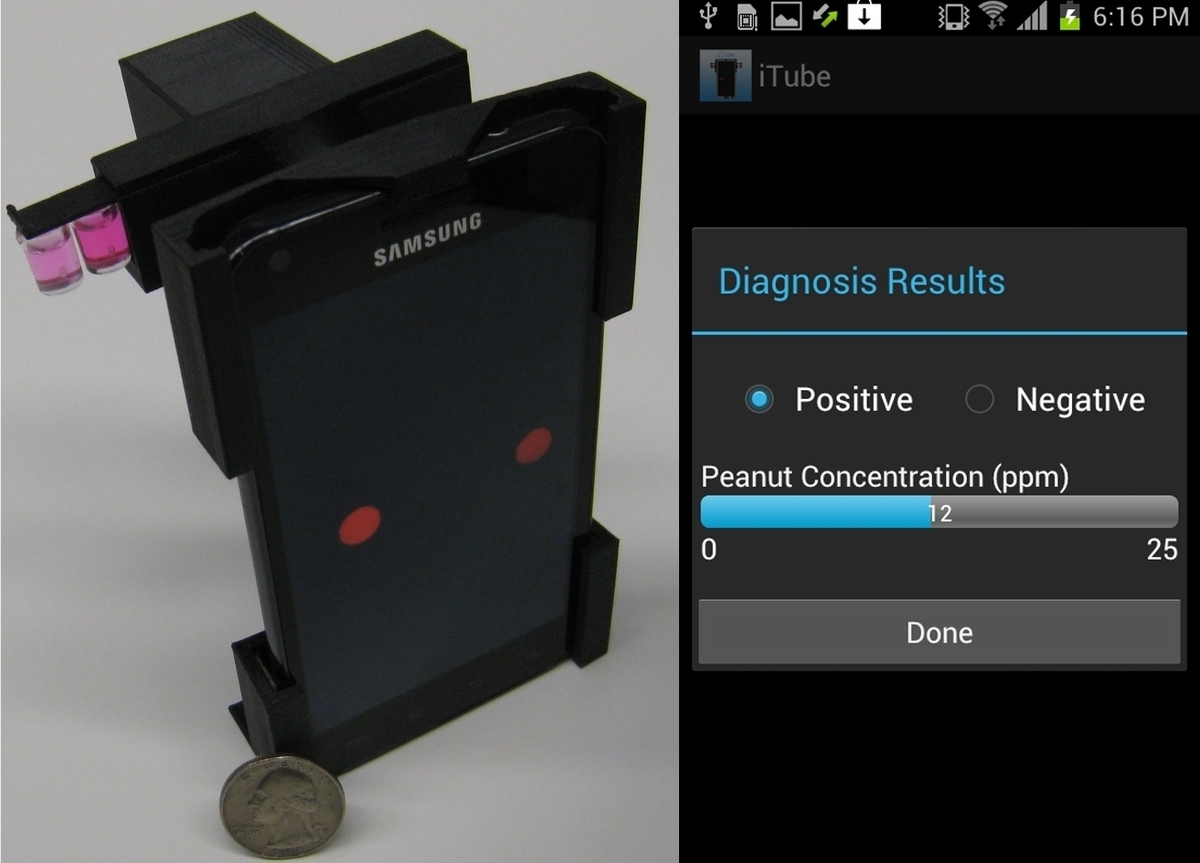 The iTube platform, left, uses colorimetric assays and a smartphone-based digital reader to detect potential food allergen. A screen capture of the iTube App appears on the right.

Managing food allergies can be a pain, requiring lots of sleuthing of ingredients in restaurants and supermarkets. But people with potentially lethal allergies to nuts and other foods don't have much choice.

Dozens of smartphone apps offer to make that task easier. Doctors say, though, the apps now on the market just aren't reliable enough.

We here at The Salt got to thinking about food allergy apps when we ran across Aydogan Ozcan's new smartphone-based food chemistry lab. The iTube uses a standard cellphone camera to analyze a food's chemical composition. A user need only pop a chunk of food into one of the two wee test tubes attached to the phone, wait 20 minutes, and — presto! — laboratory results, in parts per million.

Ozcan, a professor of electrical engineering and bioengineering at the University of California, Los Angeles, specializes in re-engineering cell phones into tools. He invented, for example, an inexpensive microscope that could be used to test blood for malaria parasites or the HIV virus.

He envisions the iTube as a tool for schools, restaurants and, of course, parents of children with food allergies. Users of the minilab could upload their results to a personal database or share the results with people around the world to create a crowdsourced food allergy database.

Ozcan recently tested the iTube prototype with store-bought cookies and found that his device accurately identified the presence of peanuts. The results are published online in the journal Lab on a Chip.

Charmed as we are by this invention, we realized that when talking about life-threatening illnesses it would be good to talk to a doctor. So we called up Scott Sicherer, a researcher at the Jaffe Food Allergy Institute at Mount Sinai Hospital in New York. He is not charmed at all by the profusion of food allergy apps out there.

"I definitely have concerns and skepticism and warnings for my patients who use any of these things," he told The Salt. "As far as I know, they are not accurate enough to rely on," he said, speaking about food apps in general. He has not tested Ozcan's iTube device.

Food allergy apps on the market fall into three categories: food journals, to track foods eaten and symptoms; databases of food ingredients; and bar code scanners that can be used to determine food ingredients.

The food journals seem like they'd be harmless, since all the data comes from the person using them. But Sicherer says they could lead people to self-diagnose an allergy that isn't there and put themselves on needlessly restrictive diets. "Talk to a doctor" about symptoms, he says. "Don't try to diagnose yourself. That's where people get themselves into trouble."

A scan of available iPhone and Android food database apps reveals lukewarm reviews, with people noting inconsistency between the apps and actual product labels. Given how often food manufacturers change products and ingredients, it seems like maintaining an accurate, comprehensive database for an app would be difficult at best. Sicherer says: "When you're talking about your health and safety, you might not want to rely on that."

How about the bar code readers? They've been very successful for companies, such as Weight Watchers, that offer them to help people identify the calorie, fat, and fiber content in packaged foods.

But Sicherer dumps cold water on the notion of relying on these kinds of apps for finding potential allergens. "There's a big difference if you're deciding if something's going to send you into [life-threatening] anaphylaxis, or if the calories are higher or lower. The margin of error is different."

Unfortunately, Sicherer says, the most reliable and simplest thing to do to avoid food allergens is still to "read the label carefully, [and] ask questions in a restaurant."

But Ozcan disagrees. "This is at best 'unscientific!,' " he tells The Salt by email. Restaurant staff cannot provide any more than a disclaimer that there may be traces of allergens due to cross-contamination in processing, manufacturing, and transportation, he says. Instead, "You need a sensor that can specifically and sensitively detect the allergen that might exist in your food. This does not mean that sensor will diagnose you as an allergic person, though."

Oscan's lab on a phone looks like it could take care of the inaccuracy problem. But the prototype requires users to undertake a mini chemistry experiment. They would have to grind up the food, mix it in a test tube with hot water and a solvent, and then mix it with a series of testing liquids and wait for results. That process takes about 20 minutes.

Imagine buying a brownie in a coffee shop and then going through that 20-minute drill. Suddenly asking the server "Does this have nuts in it?" seems like not such an ordeal.