Accessibility links
Why We Toast: Uncorking A New Year's Tradition : The Salt Some early Europeans toasted to profess their love to young women, while others lifted their arms to honor their kings. Toasting, which dates back to ancient times, is a ritual shrouded in urban legends. But one historian says some of the tall tales are actually true. 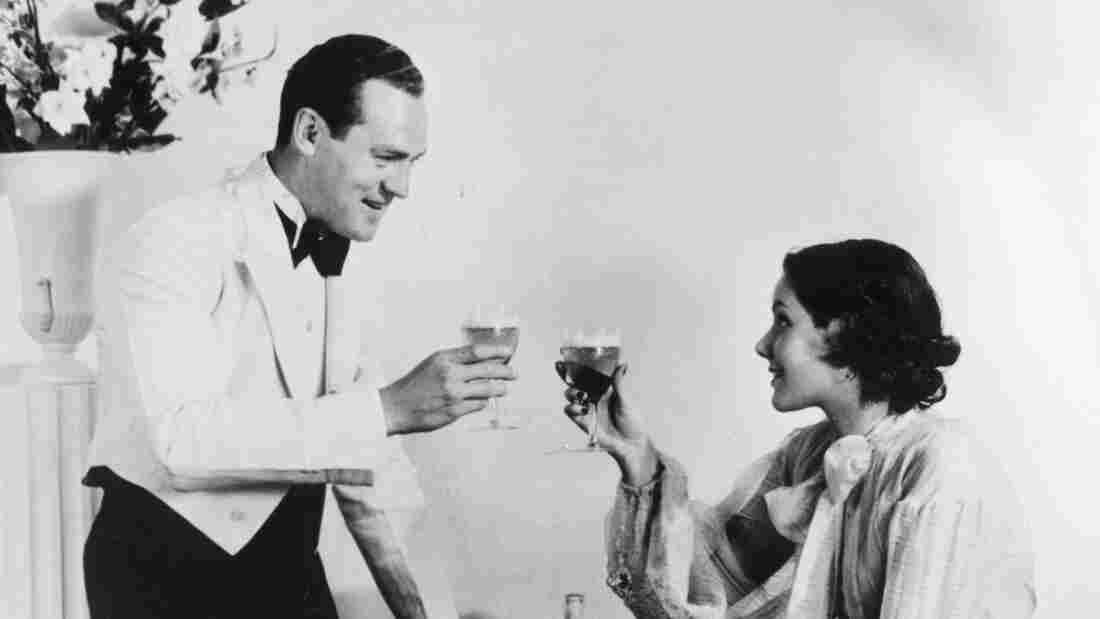 The act of toasting feels natural: You lift your arms in affirmation and drink in honor of an occasion or a loved one.

It's what millions will do this week as they ring in the New Year, but why? Like shaking hands or saluting, toasting is a habit with incredibly foggy beginnings, so we here at The Salt decided to dig into it, for the sake of science.

"There's a thin line between history and folklore," says historian Paul Dickson. He should know. He wrote a book about toasting called Toasts: Over 1,500 of the Best Toasts, Sentiments, Blessings and Graces. "But toasting definitely goes back to the ancient world."

Ulysses drank to the health of Achilles in The Odyssey, he says. And in Rome, drinking to someone's health was so important that the Senate demanded that all diners drink to their emperor, Augustus, before every meal.

Almost every culture — the Hebrews, Egyptians, Persians, Saxons, Huns — had a pledging of honor with a glass, Dickson says.

But it wasn't always called a toast. The term didn't come about until the late 17th century. In the same way you throw a lime in tequila, it was customary to plop a piece of toast or crouton in a drink, Dickson says. Think of it as an early form of a cocktail snack.

"It may have been a flavoring device," he says. "The practice was common, and virtually anything found floating in a drink was referred to as toast."

Origins Of The 'Clink'

And the clinking of glasses? Dickson says that toasting flair didn't popularize until the early days of Christianity.

Many believed the bell-like noise would drive off the devil — which was most dangerous in times of drinking and reveling. But that's just one theory.

Another legend contends that by adding the clink, toasters could get the greatest pleasure from a drink, Dickson says. Before the clink, toasts only satisfied four of the five senses.

And there's a third theory.

Though Dickson's research can't confirm or deny this one, many believe the clinking of glasses began as a way for nobles to avoid being poisoned. The tale goes that the clank would slosh liquid from one drink to the other, reassuring the guest that his or her drink was safe and untouched.

The Road To The American Toast

Regardless of the reason, many in those early days drank to health, hospitality and honor. But every culture practiced different customs — some a bit strange. The Irish tended to recite blessings, whereas young Englishmen in the 17th century toasted sour drinks to profess their love.

"The practice called for men to show their affection for a woman by stabbing themselves in the arm, mixing their blood in their wine, and drinking to the lady in question," Dickson explains.

In Scotland, it was customary to drink sparingly during the meal and then bring in a large punch bowl filled with whiskey, hot water and sugar after dinner. The drinking sometimes lasted eight to 10 hours, Dickson says.

And as for early Americans — they adopted the tradition of toasting quite readily. But their ritual was largely directed to America as a patriotic gesture. They toasted to the new republic and the experiment of democracy.

'Inventing Wine': The History Of A Very Vintage Beverage

"After the [Revolutionary] War, no official dinner or celebration was complete without 13 toasts, one for each state," writes Dickson. "For many years, the 13 toasts were obligatory at local Fourth of July celebrations."

Today, the ritual of toasting seems more popular than ever, perhaps a product of movies and cultural references, Dickson says.

Toasts have also evolved into something of a verbal souvenir: "It's something you take home with you as sort of a remembrance of that time."

We'll certainly do that on Monday night.