Accessibility links
Drinks, Diets And Meat: Hits Of 2012, Predictions For 2013 : The Salt Coffee, wine, beer and cocktails were popular topics on The Salt in 2012, as well as weightier matters like organic food, genetically modified seeds, and the paleo diet. 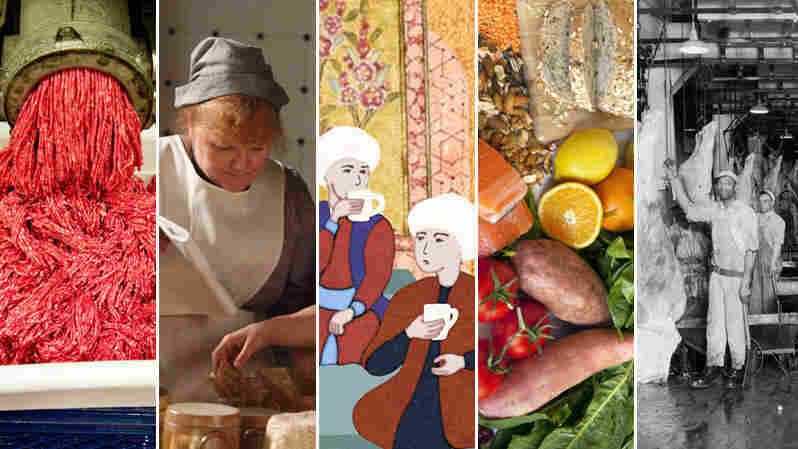 As the new year begins, we here at The Salt are looking back at the food topics that got you talking in 2012, and pondering which conversations will continue in 2013. (And, like many of you, we're also firmly swearing off the holiday cookies.) So, instead, feast your eyes on this roundup of our top stories from the past 12 months:

Drinking: Whether it was the secret to taste behind today's craft beers, the potential bone benefits of wine for boomers, or cooling down with a hot drink on a summer's day, if the headline said beer, wine or coffee, it was pretty much a traffic winner.

The top post of 2012 was the story of a group of Belgian monks who are making their pricey beer temporarily more available to the world in order to raise funds to renovate their abbey. The No. 2 post? A quirky historical piece on how coffee drinkers literally lost their heads in 17th century Turkey.

Looking ahead, we predict old ways will continue to inspire today's bartenders and brewers (mead, anyone?). And when it comes to cocktails, expect the unexpected (yes, there's bacon-flavored vodka).

Diets: Speaking of bacon, there really can be too much of a good thing (see death by bacon, No. 9).

The No. 4 post of the year was a diet post — not the kind about three quick tips to lose the belly fat (we wish it were that simple!), but about how eating low-glycemic foods like brown rice and veggies can help you feel fuller, longer.

But we didn't just look at diet in the traditional sense of losing weight. We tackled all kinds of things that influence our diets: the evolution of lactose tolerance (No. 3), why organic food may not be healthier (No. 5), McDonald's surprising cachet in France (No. 6) and why, in the post-Downton Abbey era, British food was so bad for so long (No. 7.)

Other popular posts pondered chocolate and metabolism (No. 10) and how to make skinnier cocktails. On weightier matters, we tackled myth-busting on genetically modified seeds, pondered tossing expired food (No. 8) and explored what folks are doing about food waste.

2012 saw the genetically modified food label initiative go down in defeat in California, but supporters say it's just the beginning of a new food movement that is trying to understand where our food comes from. We don't see that trend going away anytime soon.

Meat: Speaking of where food comes from, we spent a lot of time this summer thinking about meat. The result: Meat Week, a collaboration with Morning Edition that included popular posts on the rationale behind the meat-centric paleo diet and some original graphics breaking down the numbers behind America's meat-eating ways.

As people continue to question antibiotics in our chicken and other meat-safety issues, we're sure we'll have plenty of meat to write about in 2013.