Accessibility links
Apes Have Food, Will Share For A Social Payoff : The Salt Humans have a long tradition of sharing food with strangers, and it turns out bonobos do it, too. In fact, the bonobos in a recent experiment were more likely to offer fruit and nuts to a stranger than to a familiar ape. But that doesn't necessarily mean they're altruistic. 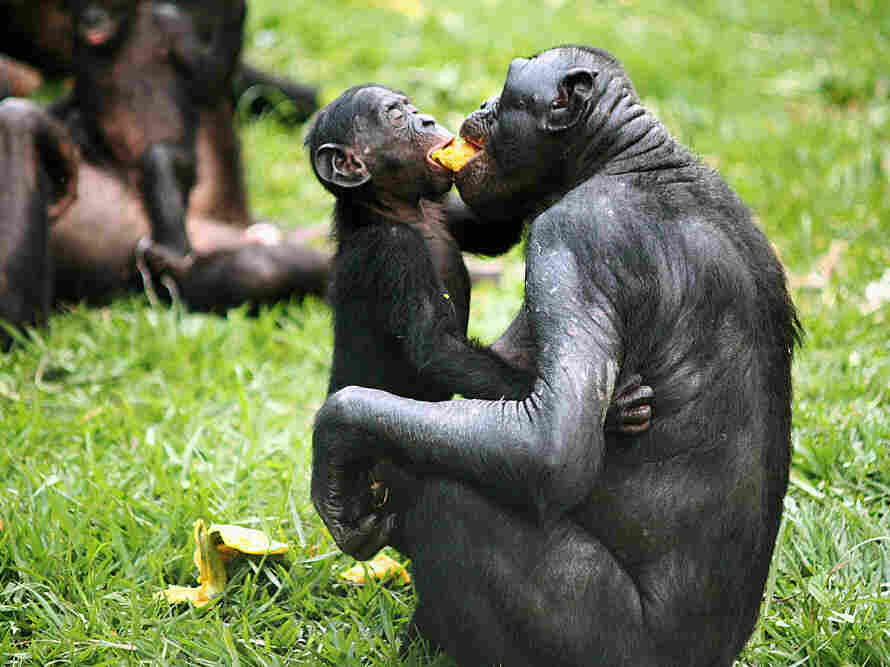 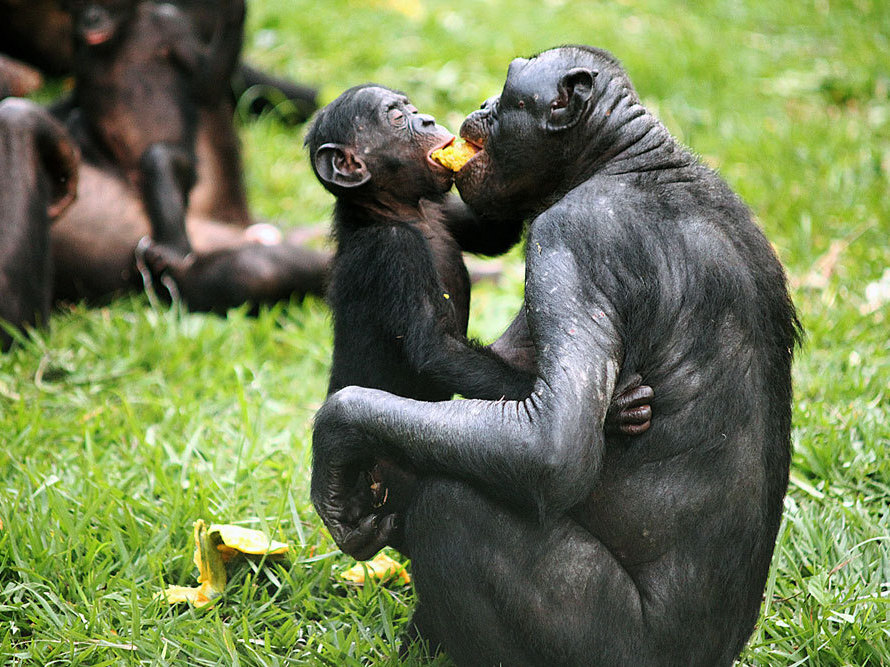 People have been sharing food with strangers since ancient days, offering up the household's finest fare to mysterious travelers. Think Abraham and the three men of Mamre in the Bible and the folks who take in strangers after natural disasters like Hurricane Sandy. That deep tradition of generous hospitality has long been thought uniquely human.

If so, then bonobos, those gregarious African apes, may be more like us than we thought.

"The pairs that are unfamiliar with each other are the ones that shared most often," says JingZhi Tan, a graduate student at Duke University who tested bonobos' penchant for sharing food and discovered that they not only share with strangers, they even offer their fruit and nuts to an unfamiliar bonobo faster than they will feed one they know well.

Bonobos, like humans, are acutely social, and often eat together. With both species, it works. Children and other vulnerable relatives get fed, social ties are strengthened and alliances formed.

But humans also developed a rich tradition of feeding strangers, one that's embedded in religion and literature – the xenia of ancient Greece, promoted by Zeus, the god of travelers. Back then there were practical reasons for selfless hospitality. It allowed people to travel far from home in the days long before Holiday Inns and drive-throughs. Stingy hosts were reviled, but so were guests who failed to be properly grateful. When Paris made off with his host's wife, Helen, in the Iliad, that faux pas kicked off the Trojan War.

But could hospitality be important to apes? Tan and his colleagues at Duke had done experiments with bonobos two years ago that showed that bonobos would share food with unrelated bonobos, rather than hoard it. Now they wanted to find out just how far that spirit of sharing went. So they created a series of experiments with bonobos living in a sanctuary in Kinshasa, Democratic Republic of Congo.

The series of experiments gave bonobos the ability to decide whether they would share their apples, bananas, papayas, and peanuts by giving them control over doors in a room. (See how the researchers did it in this video.)

In the first experiment, the scientists created a setup where one bonobo was put in a room with food. That bonobo could choose to open two doors leading to two other rooms – one housing a friend, the other, a stranger.

All of the bonobos opened a door to let in another, rather than dine alone. And nine of the 14 animals chose dining with the stranger over the familiar face – the ape equivalent of a restaurant's communal table.

What's more, when the familiar bonobo was invited to join the feast, it was almost always by the stranger, who would have considered that bonobo a new face. None of the animals fought over the food, and there was quite a bit of the friendly genital rubbing that's made bonobos renowned in animal behavior-land.

Then the scientists tweaked the layout. In another experiment, the bonobos were isolated in separate cages, with food in a compartment in between. Offered the option of sharing the food without physical contact, not one of the seven bonobos tested pulled a rope that would have let another reach through to the food. The results were published online in the journal PLoS One.

So it looks like if you're a bonobo, sharing food is only worth it if it's a social event. Bonus points if you're meeting someone new. It's fascinating behavior, but the researchers say it's not clear that this is altruism. "If you're being nice to a stranger, it's not necessarily unselfish," Tan told The Salt. It's easy to see the benefits to humans in sharing a meal with a stranger, even in modern times. Good conversation, future business partners, a broader social network – maybe even romance. Perhaps bonobos see those potential payoffs in a meal shared, too.