Accessibility links
Between A Rumba And A Roll: Dissecting A Bartender's Beat : The Salt The way bartenders shake their cocktails has practically evolved into their signature beats. Some shake hard, some shake over the shoulder, some shake in front. Most bartenders say the shake is essential to a perfect drink — but is it all style or is there some substance to the claim?

When you walk into a crowded bar, the sound may not be apparent at first. But before long, your ears will pick up the rhythm of an unmistakable beat.

It's a bartender's shake.

"Some people think I'm listening to a rumba when I'm shaking," says D.C. bartender Eddie Kim. "I don't think it matters what the background music is as long as you keep a rhythm."

Another Beltway bartender, J.P. Fetherston, agrees, adding that the spectacle helps him keep his audience captivated.

"You can see the faces on the other side of the bar. Everybody loves to hear that shookuh-shookuh-shookuh," says Fetherston imitating the rolling, rhythmic sound of his cocktail shake. "If it has a little bit of flair to it, you can see people getting into it. They even start doing a little conga dance sometimes. It sort of helps the whole show."

Whether a bartender's rhythm reminds you of a dance beat or a train whistle, these bartenders say, it's fundamental to creating a well-crafted cocktail. Unless you prefer your cocktail stirred, in which case, see our Bond martini report.

The shake makes a drink cold and distributes its contents evenly. But some experts say there are some factors that may affect the perfect blend. For starters, not all ice is created equal. And that can affect how long and how hard you should shake. 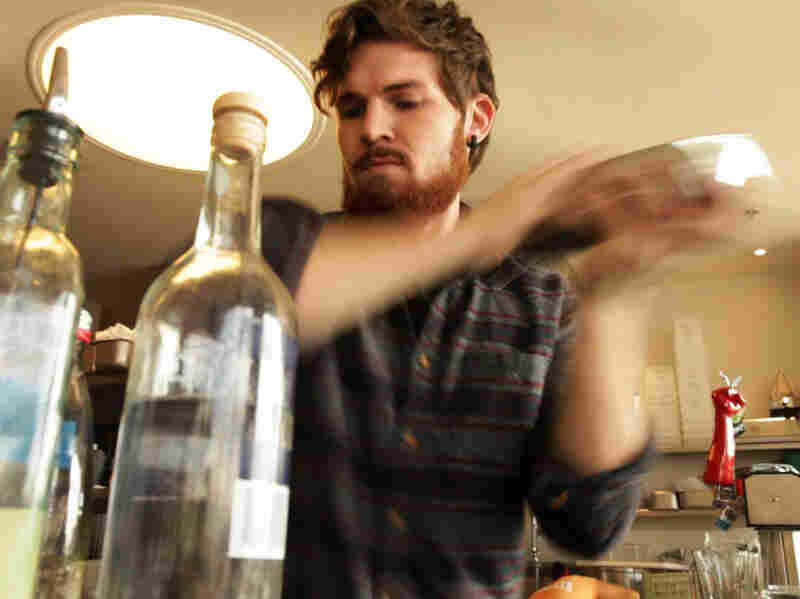 Edward Korry, who heads up Johnson and Wales University's beverage and dining services program in Providence, R.I., says most cocktails reach their prime at 15 to 20 seconds of shaking, but the timing can also depend on the quality of the ice.

"The worst kind of ice is hollow ice. We tell our students if the recipe calls for a 15-second shake and you're going out to the field and you've got hollow ice, well, you're going to have to reduce that to a five- to seven-second shake because of the water dilution," Korry says. "The ice just starts to disintegrate really, really fast."

"If the machine is not working at full capacity, they'll be a little more brittle and you can hear that in the shaker. You can hear that ice is breaking apart very easily," says Fetherston. "Whereas if it does what it normally does, they stay in big pieces much longer. You can really shake it a lot harder."

Fetherston, who often shakes his drinks directly in front of him instead of over the shoulder, says his shaking style has been influenced by other bartenders, like his former employer, Derek Brown, who owns The Columbia Room, a reservations-only D.C. cocktail bar, and Japanese bartender, Kazuo Uyeda, who's known for developing the "hard shake."

Uyeda describes his methods in his book Cocktail Techniques: "I introduced a more forceful three-point shake in order to thoroughly mix the ingredients. To create a more complex motion, I introduced a snap and then a twist while I held the shaker diagonally. And that's how the hard shake was born."

While Uyeda is influential, not everyone believes that his shake creates the best cocktails. In fact, not everyone agrees that maintaining a rhythm in your shake or using perfect ice creates a better drink.

The challenge with the bartender's shake is that while everyone has an opinion, there's not really much definitive data. Back in 2009, a trio of New York cocktail friends — Dave Arnold; Alex Day, a partner at the Manhattan bar Death and Company; and Eben Klemm, a molecular biologist turned bartender — unveiled the findings of their own experiment, which found that neither the style of shaking nor the type of ice had an impact on the temperature or dilution of the cocktail. At 20 to 25 shakes, they say, everything reaches equilibrium, no matter what.

Arnold, who is the host of the online radio show Cooking Issues, says they even conducted what he calls a "crazy monkey shake" — tossing the shaker around haphazardly — and they still got the same results.

So, why not just have a machine or a monkey stand in for a bartender? Even Arnold says it wouldn't be the same. "I think the theater of the bar is important. It's one of the reasons that you're not drinking at home."

See our video above to meet some of these bartenders and hear their shaking philosophies in their own words.