Accessibility links
How Google Earth Revealed Chicago's Hidden Farms : The Salt When scientists scoured lists of the city's community gardens, they discovered they didn't tell the whole story of where food was being grown. Satellite images instead show the city's food-producing gardens tucked away in backyards, on roofs and thriving in vacant lots. 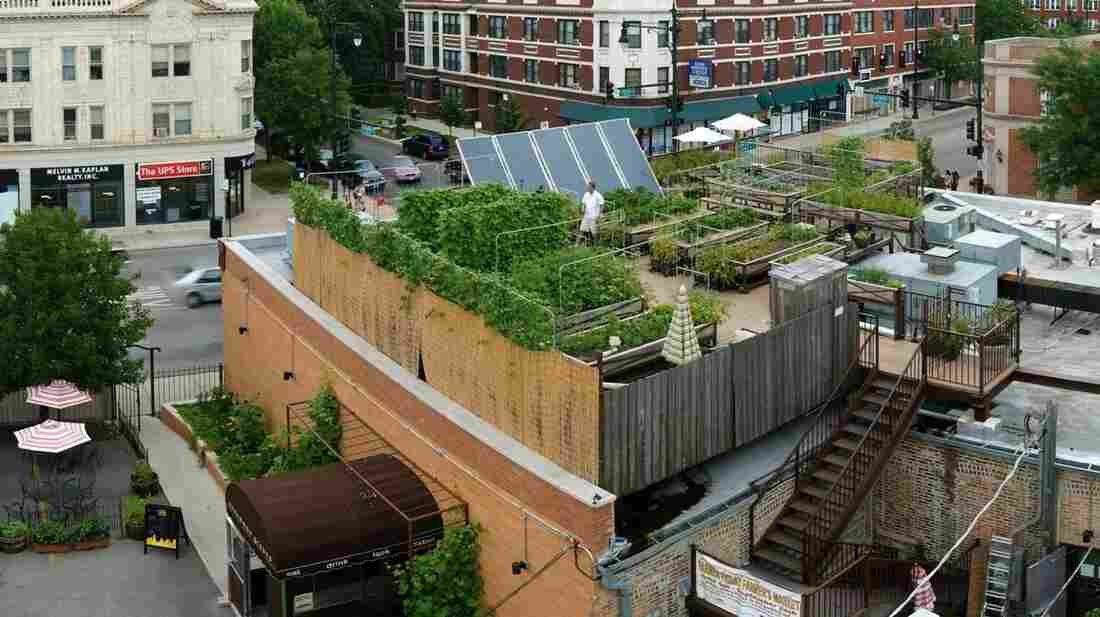 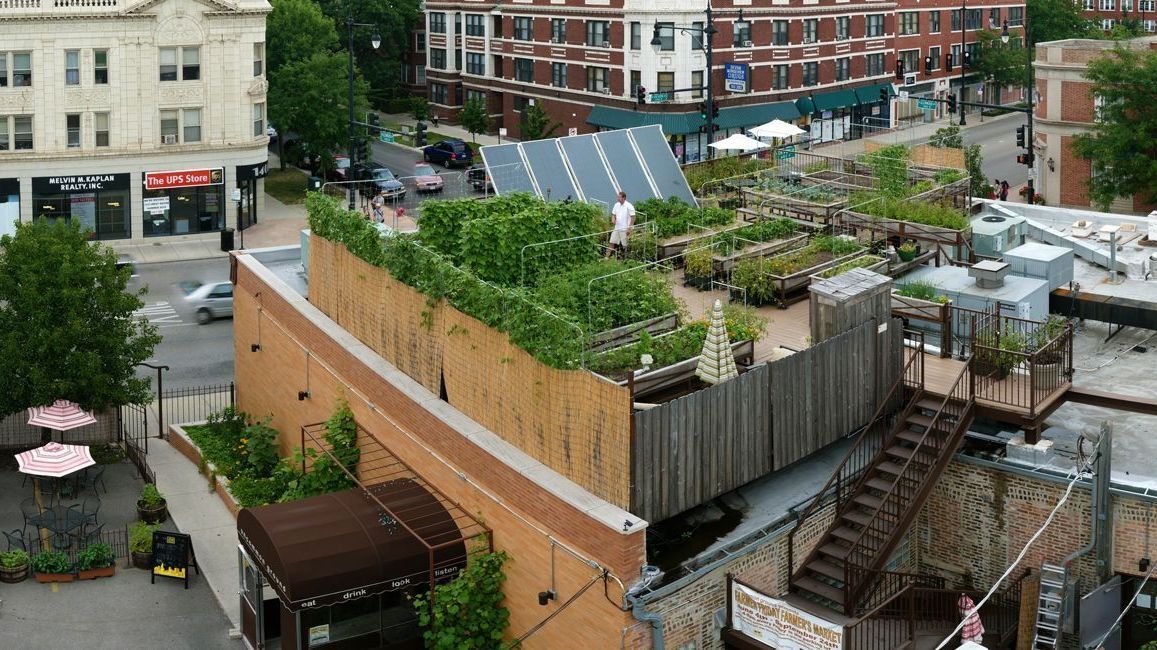 Uncommon Ground, a certified green restaurant in Chicago, hosts an organic farm on its rooftop.

Cities have plenty of reasons to care about how much food is being produced within their limits — especially now that community and guerrilla gardeners are taking over vacant urban lots across the country. But most cities can only guess at where exactly crops are growing.

And in Chicago, researchers have found that looks — from ground level, anyway — can be very deceiving when it comes to food production.

For years, various local groups in Chicago made lists of community gardens, where they assumed most of the food grown within city limits was coming from. But when researchers from crop scientist Sarah Taylor Lovell's lab at the University of Illinois at Urbana-Champaign started looking closely at those lists, they found they were surprisingly inaccurate.

"We kept visiting these gardens and found that they either didn't exist or were primarily ornamental gardens," says graduate student John Taylor.

Taylor tried to verify a list of 1,200 community garden projects, compiled from various sources, and found that only 13 percent were sites that grew food. He then turned to Google Earth, spending 400 hours over a period of eight months poring over satellite imagery of the city from 2010. The results of his search were recently published in the journal Landscape and Urban Planning.

The majority of the sites, though, were backyard gardens and vacant lots — the type of gardens that aren't usually on any list. 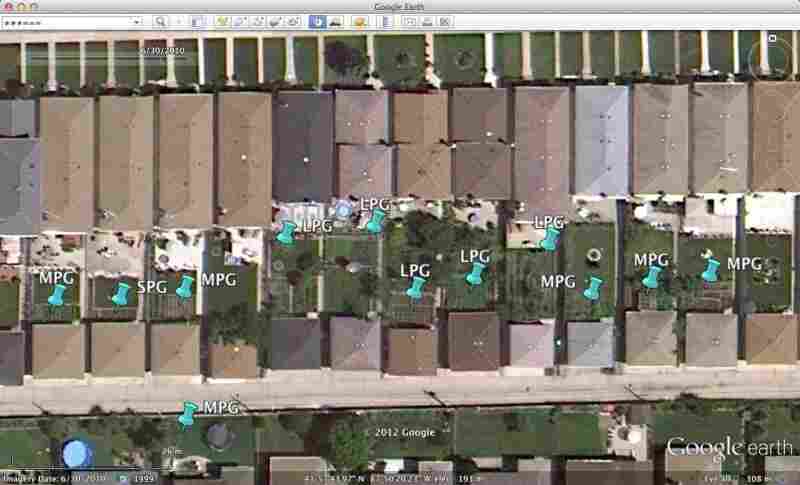 John Taylor found a cluster of backyard gardens in the Google Earth image of the far northwest side of Chicago. courtesy of John Taylor hide caption 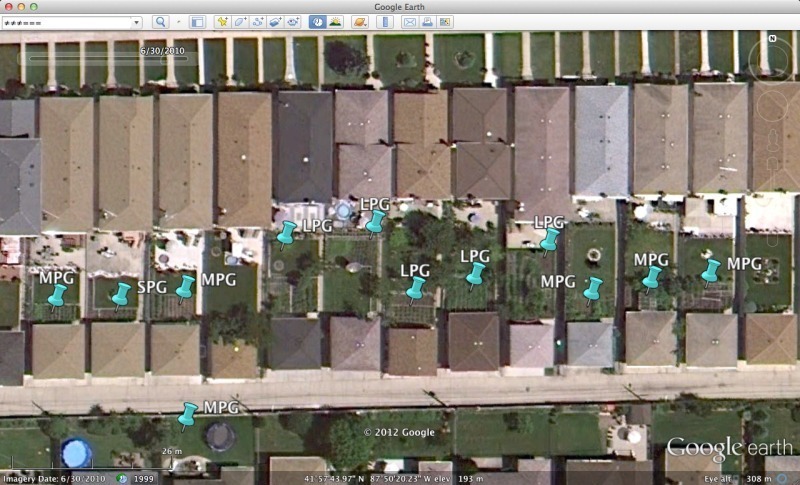 John Taylor found a cluster of backyard gardens in the Google Earth image of the far northwest side of Chicago.

"Urban agriculture is sometimes thought of as something new and trendy, but of course people have been growing food in backyards and on vacant land for generations," Taylor says. "From a planning and policy perspective, we have to consider food production at multiple scales."

Taylor's data is helping another effort aimed at documenting all of the city's agricultural sites: the Chicago Urban Agriculture Mapping Project.

When the project started a couple of years ago, "we were mostly talking about community gardens and a handful of urban farms," says Howard Rosing, a cultural anthropologist at DePaul University who's involved with the project. But now "the conversation has expanded beyond that," he says.

Currently in the pilot phase, the CUAMP plans to begin its survey of gardens and farms within the next couple of weeks, guided in part by Taylor's map.

Whether it's stalks of corn in the backyard, tomatoes in a container on the front porch, or cucumbers in the community garden, "it's all part of one big thing ... increasing local food production," says Billy Burdett of Advocates for Urban Agriculture. Urban agriculture "in a lot of cases is the best and even only option for folks to have access to healthy, locally grown food."

But more than just an advocacy tool, the map is "going to be a great resource for people to find out what is going on in their communities," Burdett says, connecting farms with restaurants that want to serve locally grown food, and gardeners looking for space.

The CUAMP map will likely be more detailed than Taylor's — which just denotes location and type — and it may contain some types of gardens that Taylor's missed, such as container gardens and small backyard gardens. But CUAMP can't reach everyone who's growing food in the city, and it won't be able to quantify how much they're growing.

They're probably going to be busy. Taylor recently repeated his search for Chicago community gardens with Google Earth imagery from 2012 and found a 50 percent increase.