Accessibility links
Artist's State-Shaped Steaks Explore Beef's Origins : The Salt Hoping people will think more about where their meat comes from, art graduate student Sarah Hallacher has visualized the U.S. beef industry with a series of steaks (actually, clay) sculpted into the shape of states and packaged in Styrofoam and shrink wrap.

If there's one thing we love more than talking about beef here at The Salt, it's visualizing the U.S.'s insatiable appetite for meat through infographics and charts.

So when we ran across Sarah Hallacher's Beef Stakes project over at Fast Company's Co.Design blog, our eyes lit up like the charcoal grill on Super Bowl Sunday.

An art graduate student at New York University, Hallacher has brought into focus the top U.S. beef producing states by creating state-shaped steaks and then packaging them in Styrofoam and shrink-wrap, so they look just like those rib-eyes and tenderloins you grab from your grocery refrigerator case.

Hallacher focused on the four top beef makers and scaled each steak's size to the total pounds shipped out each year. So Nebraska – which produced a whooping 7.2 billion pounds of ground beef and T-bones in 2011– is the biggest steak, measuring over 7 inches from north to south.

Texas, which ranks fourth in the country, is the most petite steak in the series, but it's by far the most shapely. Hallacher carefully sculpted it's curvy edges with a thin layer of "fat," trimmed back to a healthy level.

And, oh yeah, the Beef Stakes are all made with modeling clay, so you can hold and examine them without worry about catching a nasty E. coli bug.

That's a primary goal of the project, Hallacher says – for people to explore the data behind America's beef industry through a hands-on, tactile experience.

But the pieces are also visually appealing. By swirling in white clay with the red, Hallacher adeptly mimics fat marbling in the steaks, just like you see in a prime cut of meat. 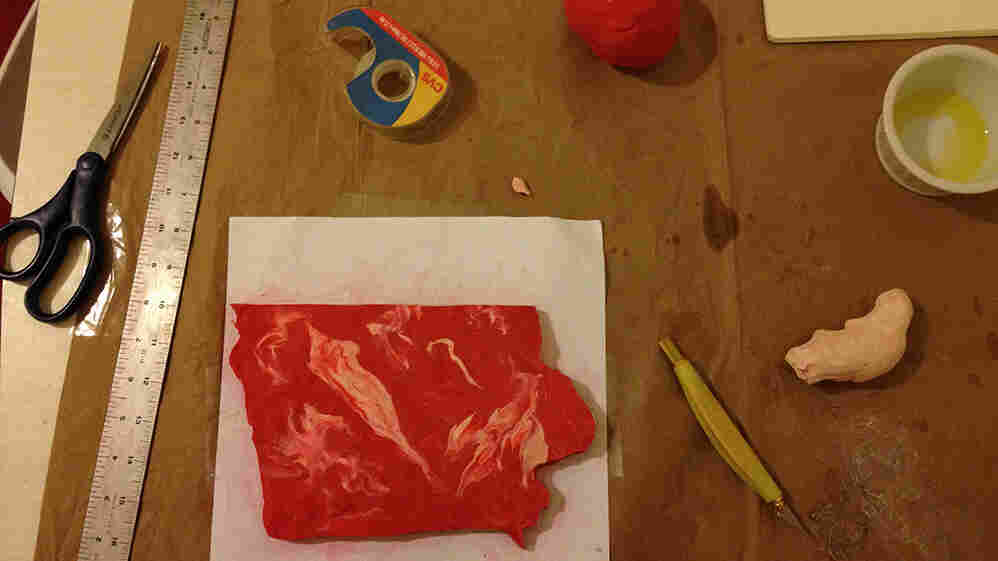 Sizing Iowa's steak. The height of each steak, from top to bottom, scales with the state's annual beef production. Iowa ranks second in the U.S. with over 6.5 billion pounds of beef made in 2011, so its steak is about 6.5 inches tall. Courtesy of Sarah Hallacher hide caption 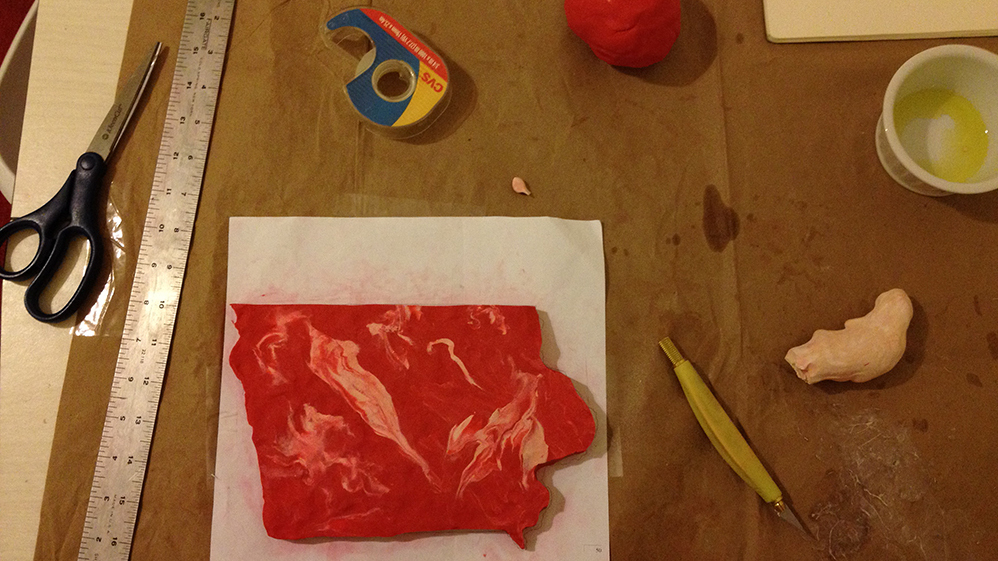 Sizing Iowa's steak. The height of each steak, from top to bottom, scales with the state's annual beef production. Iowa ranks second in the U.S. with over 6.5 billion pounds of beef made in 2011, so its steak is about 6.5 inches tall.

"I have complicated relationship with meat," Hallacher tells The Salt. "I love cooking vegetarian food. But I also feel like a need meat in my diet."

So Hallacher says she's very careful about where her beef comes from and how the cattle are raised. She's done a lot of research on the topic to figure it all out.

"There's so much information on the web about meat production — the number of cows that were slaughtered in each state, the parts that were used," she says. "I wanted to turn all that data into a tactile experience."

She chose the tradition Styrofoam package because it's visually familiar to people. "But I also wanted to point out that the packaging really doesn't tell you anything about where the meat is coming from," she says."

In contrast, the labels on her Beef Stakes are rich with information. They give the total pounds of beef produced annually in each state, the cost to produce that much beef, and how many pounds each resident in the state would need to consume to gobble up all that beef "locally."

Right now, the four Beef Stakes are only on display in Hallacher's Brooklyn apartment. But she'd love to see them at a gallery eventually or better yet, surreptitiously planted in a grocery's meat department.

"It'd be interesting to see them nestled with real meat somewhere," she says. "It might stir up conversations and debates."