Accessibility links
Mexican Mole Has Many Flavors, Many Mothers : The Salt As Mexican culinary traditions follow migrants around the world, mole is earning legions of fans.

Mexican Mole Has Many Flavors, Many Mothers

Mexican Mole Has Many Flavors, Many Mothers 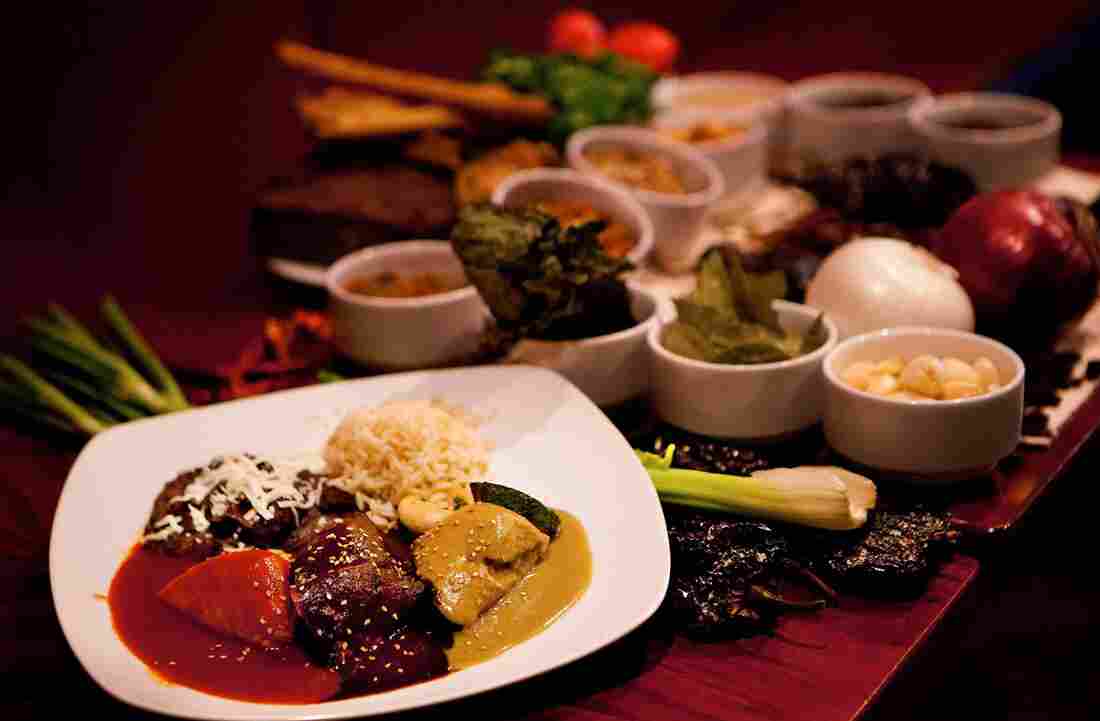 Three of the six moles served at Casa Oaxaca of Washington, D.C. Some of these mole recipes were passed down to chef Alfio Blangiardo by his grandmother. Karen Castillo Farfán/NPR hide caption 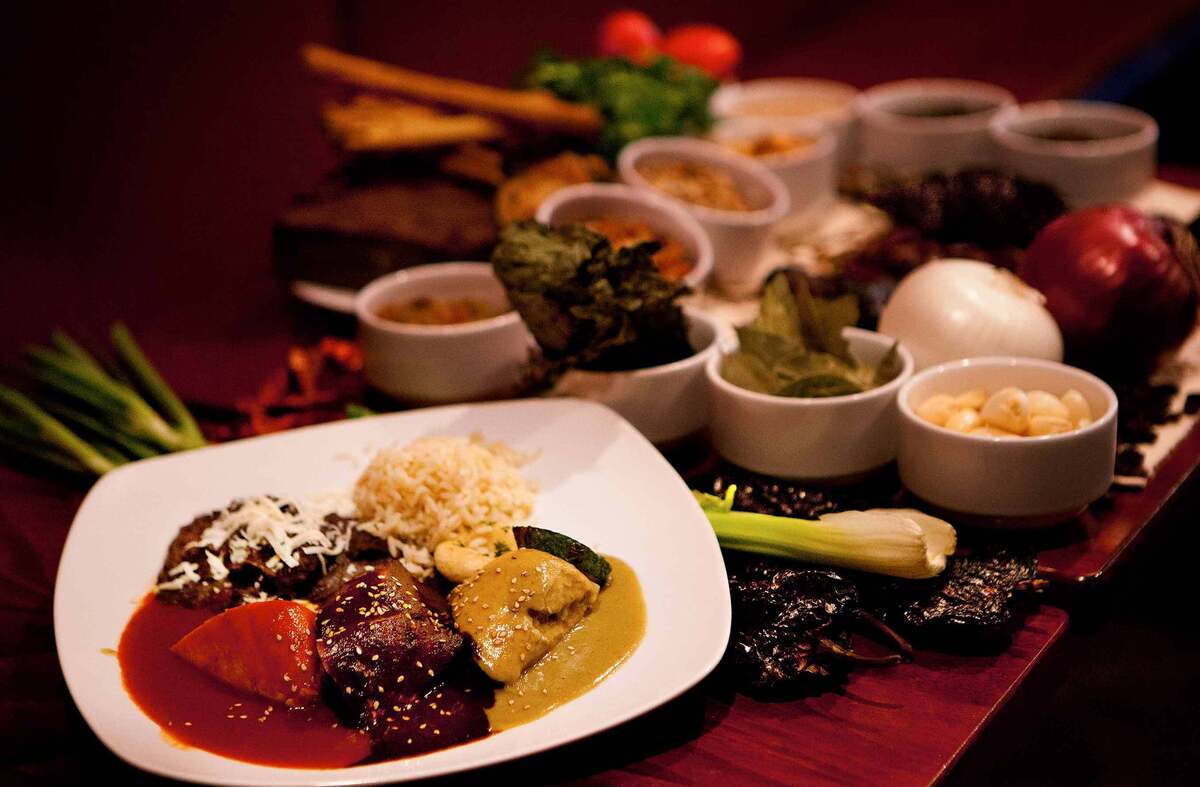 Three of the six moles served at Casa Oaxaca of Washington, D.C. Some of these mole recipes were passed down to chef Alfio Blangiardo by his grandmother.

As with so many iconic dishes in a country's culinary heritage, Mexican mole has a creation tale.

The story goes that in the late 17th century, the Dominican sisters of the Convent of Santa Rosa in the city of Puebla heard that the archbishop was to pay a visit. The sisters had to scramble to put a meal together and gathered the ingredients they had — dried chili peppers, chocolate, old bread, nuts and more — to make a sauce for wild turkey. The meal was such a hit with the archbishop, legend has it, that mole became a symbol of Mexican cuisine (up there with the taco).

But as Maricel Presilla writes in her newest book, Gran Cocina Latina: The Food of Latin America, the back story of mole is not so simple. The famed holy mole comes from "a long line of parents, such as the pre-Columbian chile-thickened sauces ... and thickened chocolate drinks. Look even closer at the nuns' kitchen and you'll start to see the whole clan of ancestors — using nuts as a thickener, for example, which was a keynote of Spanish medieval cooking."

Today this tasty and complex sauce has moved way beyond Mexican convent kitchens. With Mexicans migrating around the world, foreigners are learning how to make it, too. But take heed: Mole-making requires a serious trip to the supermarket, depending on the shape of your pantry.

Nine variations on mole appear in Presilla's book — from Oaxacan "tablecloth stainer" fruit mole with raisins and pork, to a Guatemalan mole with a plantain base. 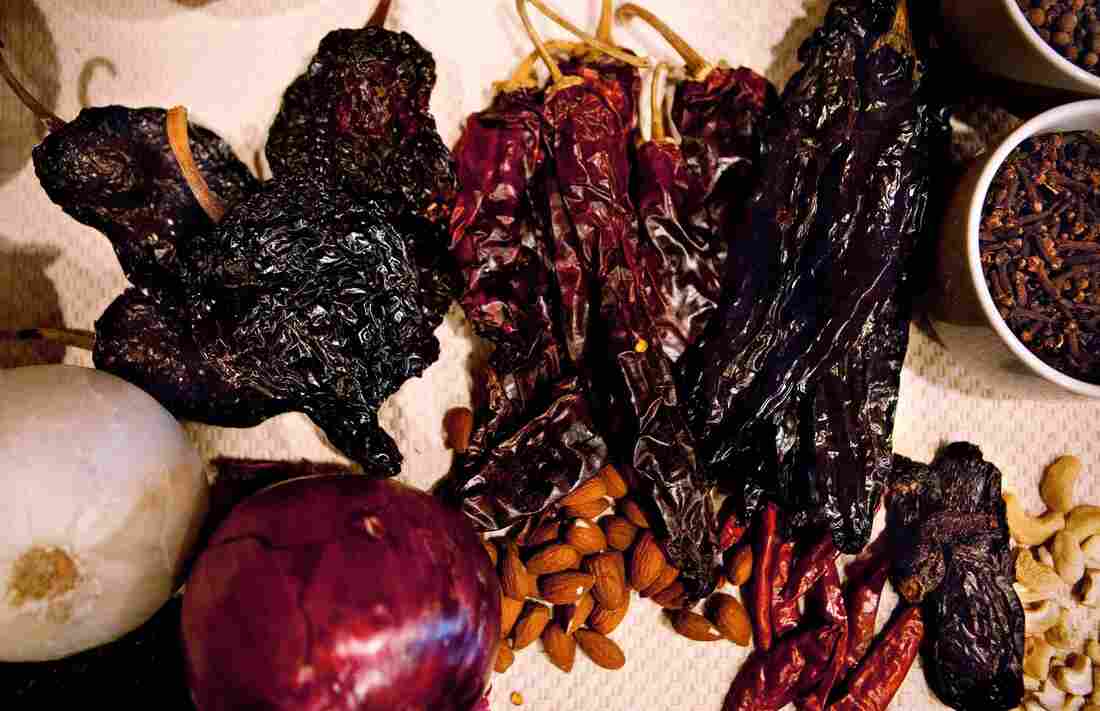 The main ingredient in mole is dried chili peppers; to prepare them for cooking, one must remove the seeds, toast the seeds with tortillas, then rinse the seeds, then roast the skins, rehydrate them and finally blend and cook them together with all the other ingredients. Karen Castillo Farfán /NPR hide caption

For the less ambitious or the time-crunched, Herdez, the Mexican product line of Hormel Foods, has been marketing the jarred mole brand Doña María since 1968. That mole needs to be thinned with broth before serving.

But as the interest in mole among consumers grows, Herdez has introduced mole "ready to serve" in a carton. "People are also looking for more flavors in their culinary experiences, and the complexities of a mole sauce provide something new and exciting for those outside of a Mexican heritage," Gilberto Gutierrez, Herdez brand manager, tells The Salt.

And increasingly mole's diversity is being showcased in Mexican restaurants outside Mexico. Alfio Blangiardo is the executive chef at Casa Oaxaca in Washington, D.C., which has six moles on its menu derived from Blangiardo's grandmother's recipes: red, yellow, green, white, the classic poblano and black mole, also known as Oaxacan mole.

Mole is a constantly evolving dish, in part because of the wide variety of possible ingredients, and there is no one way to make it, Blangiardo says. "A chili picked in lower elevation will taste different from one picked at a higher elevation," he says.

In Mexico, mole is served for breakfast, lunch and dinner but also on very special occasions, like weddings and holidays, like Day of the Dead. Traditionally, ingredients are ground by hand, making it an all-day affair. But today, grinders and blenders make the task much easier, cutting down the cooking time to four to five hours, says Blangiardo.