Accessibility links
How Mountain Grass Makes The Cheese Stand Alone : The Salt Aficionados of cheeses made from the milk of mountain-grazing cows swear they really do taste better than those from cattle pastured on plains. Now, scientists are teasing out some of these subtle differences – in hopes of proving the mountain cheese tradition is worth preserving. 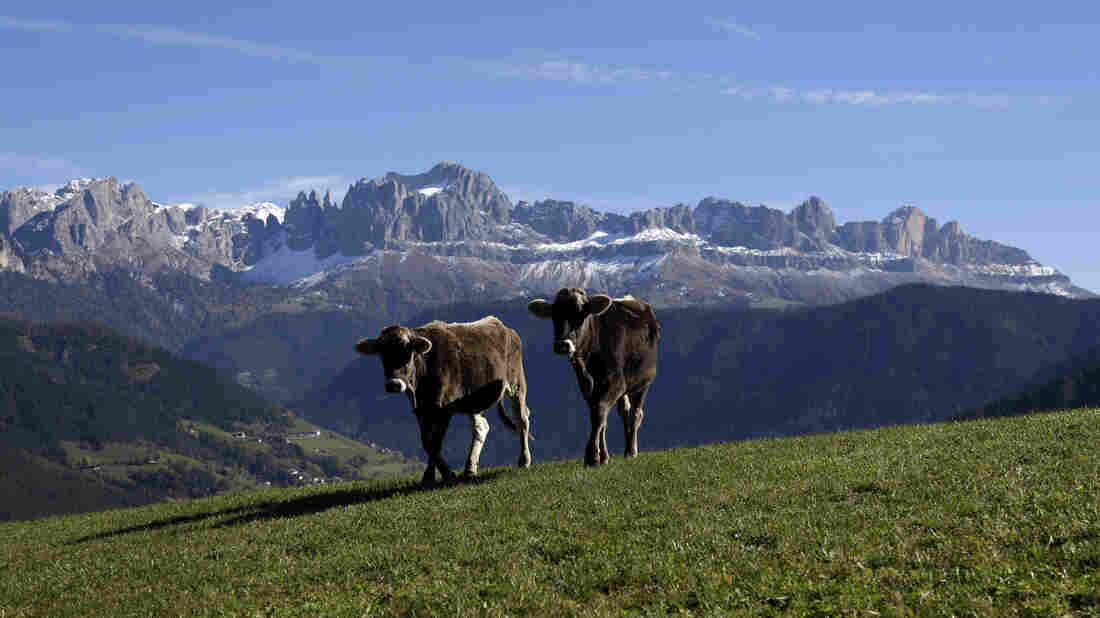 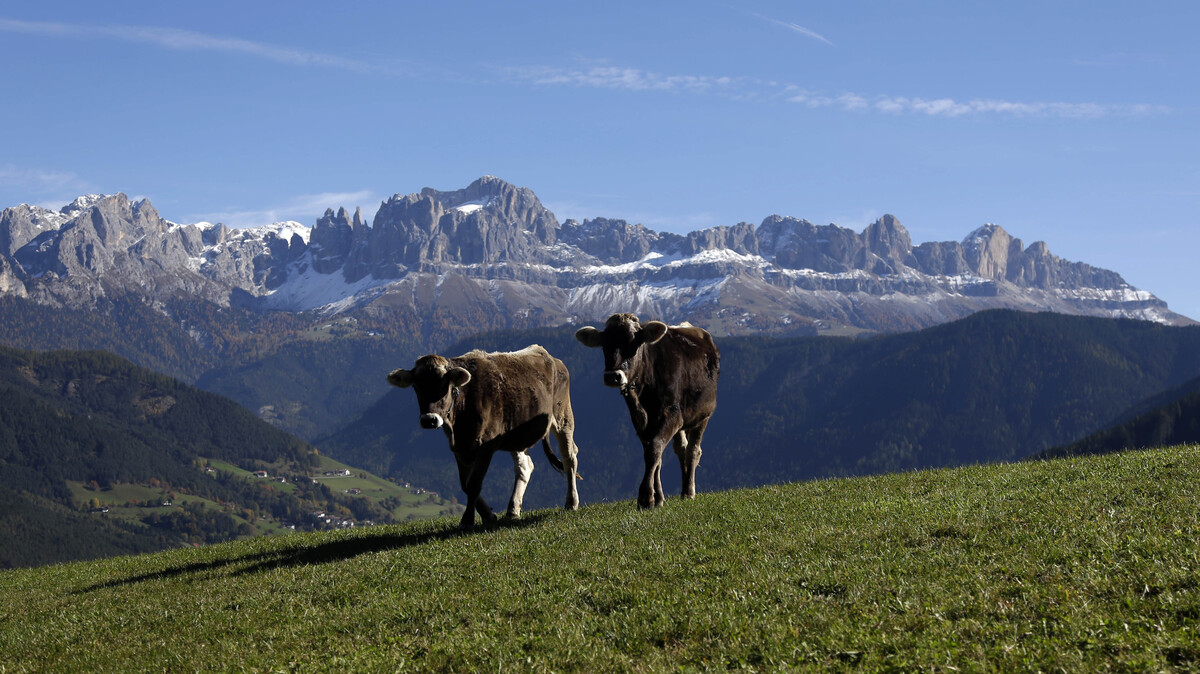 Cows graze in front of the Rosengarten mountain massif in northern Italy. Pasture grazing is practiced throughout the Alps.

Herding cattle up the side of a mountain might seem like a lot of extra work, but for thousands of years, people have hauled their cows into the Alps to graze during the summer months. Why? It's all about great-tasting cheese.

In places like Italy, some traditional cheeses, like bra d'alpeggio or Formai de Mut dell'Alta Valle Brembana, can only be made with milk from mountainside-munching cows.

But in Italy, at least, the practice may be dying out. "Young people don't want to stay in the mountain because there are poor opportunities for work," so they often move to the city, says food chemist Giovanna Contarini of the Centro di Ricerca per le Produzioni Foraggere e Lattiero-Casearie in Lodi, Italy. If there's no one left in the mountains to raise the cows and make the cheese, she says, "we risk losing an important product."

Contarini and her colleagues have been working to save these mountain dairy products. And fans of the cheeses say there's more than just nostalgia involved. It's not easy to define the flavor, Contarini says, but aficionados insist the cheeses do taste better.

There's also evidence that mountain cheese might even be a little healthier, containing, for example, more omega-3 fatty acids than cheese made from the milk of cattle raised on the plains.

The differences are definitely subtle, but researchers have figured out how to tease apart some of them. Recently, Contarini and her colleagues in Lodi even showed how to distinguish between cheeses made from cows pastured on two different sides of a single mountain. Her study appears online in the latest Journal of Agricultural and Food Chemistry.

Where cows live changes what they eat — and that difference is detectable in the cheese made from their milk, says Contarini.

"In the mountain areas, the cows are free to pasture," she says. They mostly eat a mix of fresh grasses and other vegetation. Cattle raised at lower elevations in Italy, in contrast, are kept in farms and eat a prepared feed that contains dried grasses and some fat and vitamins. "Consequently, the rumen digestion is different," she says.

The rumen is the first chamber in a cow's stomach, and it's full of microbes. What a cow eats helps determine what microbes rumble in its rumen, and those differences play out in the chemical composition of its milk. "So some constituents of milk, particularly the fat and the lipid soluble compounds, are different," Contarini says.

Milk from mountain-raised cows also contains chemical compounds called terpenes, which come from little flowers growing among the grass. "In the plains cows, you don't find any terpenes," she says. Scientists aren't sure how or if terpenes affect cheese flavor, but they do consider them a marker of mountain cheese.

In her recent experiment, Contarini's group took milk from cows living on two sides of a mountain in northern Italy. Both pastures were mostly covered in fescue and bent grass, but they received different amounts of sunshine, and from different directions. One pasture also had a bit more yarrow growing in it than the other.

Milk from cows raised in each pasture was used to make a couple dozen wheels of local Asiago cheese. When the scientists analyzed the cheeses, they found they differed, just slightly, in the amounts of some hydrocarbons and trans fatty acids.

That wasn't enough to affect flavor, but it helps to validate methods that may one day be used to authenticate cheese made from mountain-raised cows, Contarini says. And while that could be helpful for consumers looking for the real thing, it could also help to show that there is real added value in these local, artisan cheeses, she says, and worth the effort of driving herds of cattle up into the Alps.