Accessibility links
How The Sweet Potato Crossed The Pacific Way Before The Europeans Did : The Salt The genes of the root vegetable have a juicy story to tell of trans-oceanic adventure. A DNA analysis of sweet potatoes adds evidence to the theory that ancient Polynesians visited South America long before the Europeans arrived. 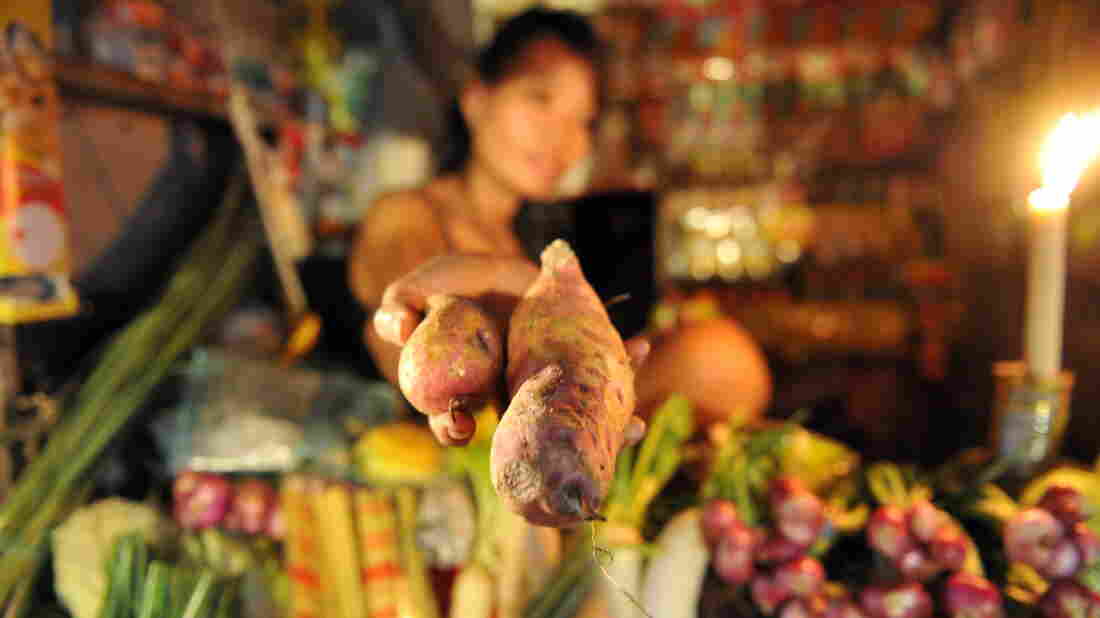 A well-traveled root: A vendor sells sweet potatoes at a market near Manila in 2011. The Portuguese brought the root to the Philippines all the way from the Caribbean. Ted Aljibe/AFP/Getty Images hide caption 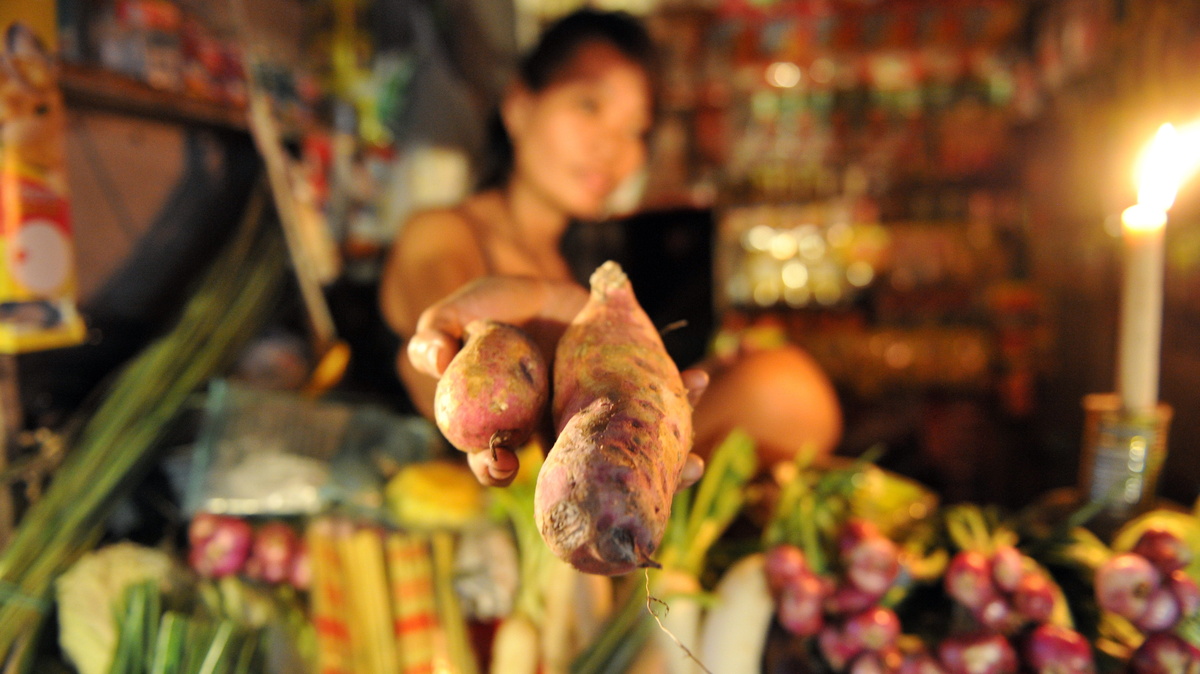 A well-traveled root: A vendor sells sweet potatoes at a market near Manila in 2011. The Portuguese brought the root to the Philippines all the way from the Caribbean.

When it comes to spreading food around the world, Christopher Columbus and his European compatriots get most of the credit.

Yes, they introduced some quintessential ingredients into European and Asian cuisine. Who could imagine Italian food without the tomato? Or Indian and Chinese dishes without the spicy kick of chili peppers?

But anthropologists think that a few foods made the 5,000-mile trek across the Pacific Ocean long before Columbus landed in the New World. And their proof is in the potato — the sweet potato.

By analyzing the DNA of 1,245 sweet potato varieties from Asia and the Americas, researchers have found a genetic smoking gun that proves the root vegetable made it all the way to Polynesia from the Andes — nearly 400 years before Inca gold was a twinkle in Ferdinand and Isabella's eyes.

The findings, published in the Proceedings of the National Academy of Sciences, offer more evidence that ancient Polynesians may have interacted with people in South America long before the Europeans set foot on the continent. 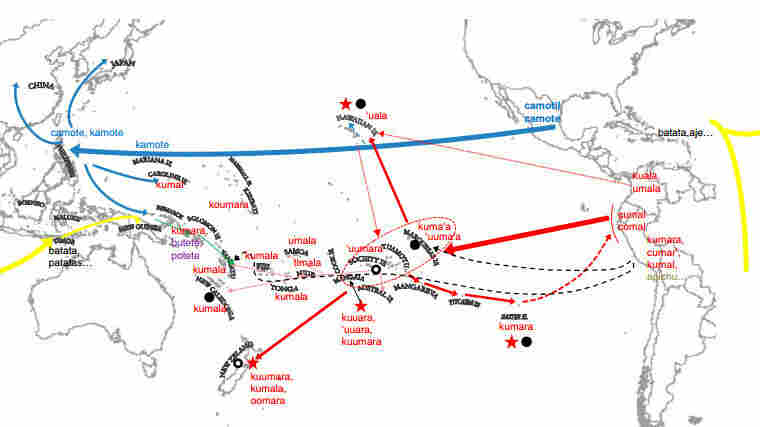 The sweet potato made three independent trips to Southeast Asia. The Polynesians probably introduced it in 1100 A.D. (red). While the Spanish (blue) and Portuguese (yellow) brought other varieties from the Americas around 1500. Courtesy of Caroline Roullier/PNAS hide caption 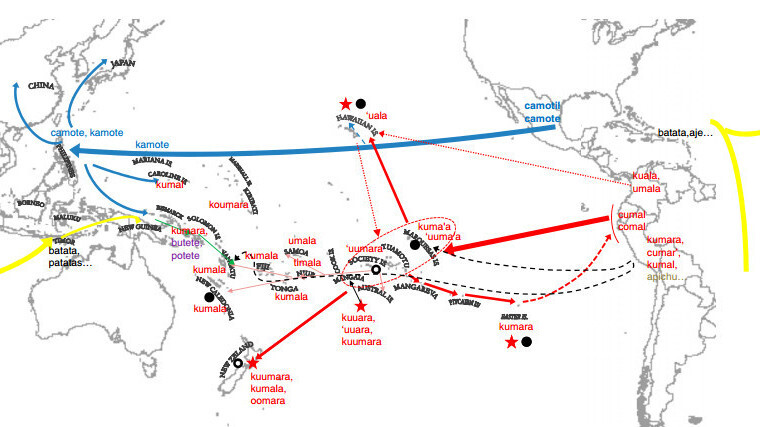 The sweet potato made three independent trips to Southeast Asia. The Polynesians probably introduced it in 1100 A.D. (red). While the Spanish (blue) and Portuguese (yellow) brought other varieties from the Americas around 1500.

"There's been many kinds of evidence – linguistic and archaeological – for contact between these two people," Caroline Rouiller, an evolutionary biologist at the Center for Functional and Evolutionary Ecology in France who led the study, tells The Salt. "But the sweet potato is the most compelling."

Sweet potatoes originated in Central and South America. But archaeologists have found prehistoric remnants of sweet potato in Polynesia from about A.D. 1000 to A.D. 1100, according to radiocarbon dating. They've hypothesized that those ancient samples came from the western coast of South America. Among the clues: One Polynesian word for sweet potato — "kuumala" — resembles "kumara," or "cumal," the words for the vegetable in Quechua, a language spoken by Andean natives.

But until now, there was little genetic proof for this theory of how the tater traveled.

Part of the reason why is that modern sweet potatoes are a genetic muddle — a hybrid of different cultivars that Europeans helped spread around the globe — so it's hard to decipher their origins from their DNA.

Rouiller got around this problem by turning to dried sweet potato remains kept in a London museum. Capt. James Cook's crew picked up the vegetables in Polynesia back in 1769, before all this interbreeding took off. Examining the genetic blueprint of Cook's sweet potatoes allowed Rouiller and her colleagues to trace the root's evolution all the way back to Ecuador and Peru.

So how did the sweet potato make the ocean voyage?

Its seeds could have possibly hitched a ride on seaweed or gotten lodged in the wing of a bird. But Pat Kirch, an archeologist at the University of Berkeley, California, thinks the Polynesians were well-equipped to sail right across the Pacific to South America and pick up a potato.

"There's a lot of evidence accumulating over the last 10 years that the Polynesians made landfall in South America," he says. "We think they had sophisticated, double-hulled canoes — like very large catamarans — which could carry 80 or more people and be out to sea for months." 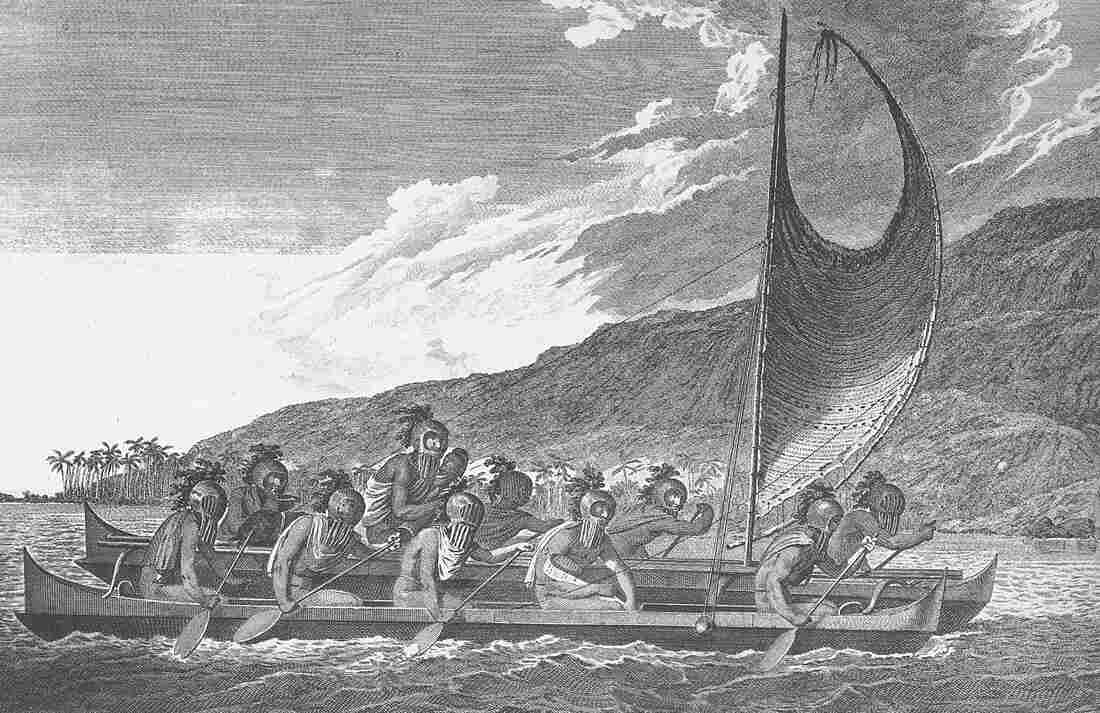 The Polynesians had sophisticated, double-hulled canoes that were built for deep sea voyages. An artist aboard Capt. Cook's ship drew a picture when they arrived in Hawaii. Wikimedia.org hide caption

But Polynesians didn't just grab the potatoes and head home. There are clues that they may have introduced chickens to the continent while they were at it.

"In recent years, there is this baffling evidence that there were chickens in western Peru before Columbus," Charles C. Mann, the author of the book 1491: New Revelations of the Americas Before Columbus, tells The Salt.

But the claims have been disputed, he says, because the chicken bones date back to sometime between 1300 and 1400. "This is like three minutes before Columbus arrives," Mann jokes. "It's kind of weird that it's right before the Europeans got there."

"It would be a mind-boggling voyage," he says. "Suppose you started some place in Easter Island. It's incredible to think that you could go all the way to South America. This is scurvy time. It's a long journey and incredibly dangerous. You'd have to be completely insane — which people are."

Insane? Maybe. Then again, you never know the lengths a person will go to for some sweet potato fries.