Accessibility links
In Order To Live With People, Canines Evolved To Love Carbs : The Salt Most dogs will eat just about anything. But, that wasn't always the case. The domestic dog's ancestor, the gray wolf, only ate meat. And a new report suggests hanging out with humans — and our garbage — may have helped them evolve to digest a wide range of foods. 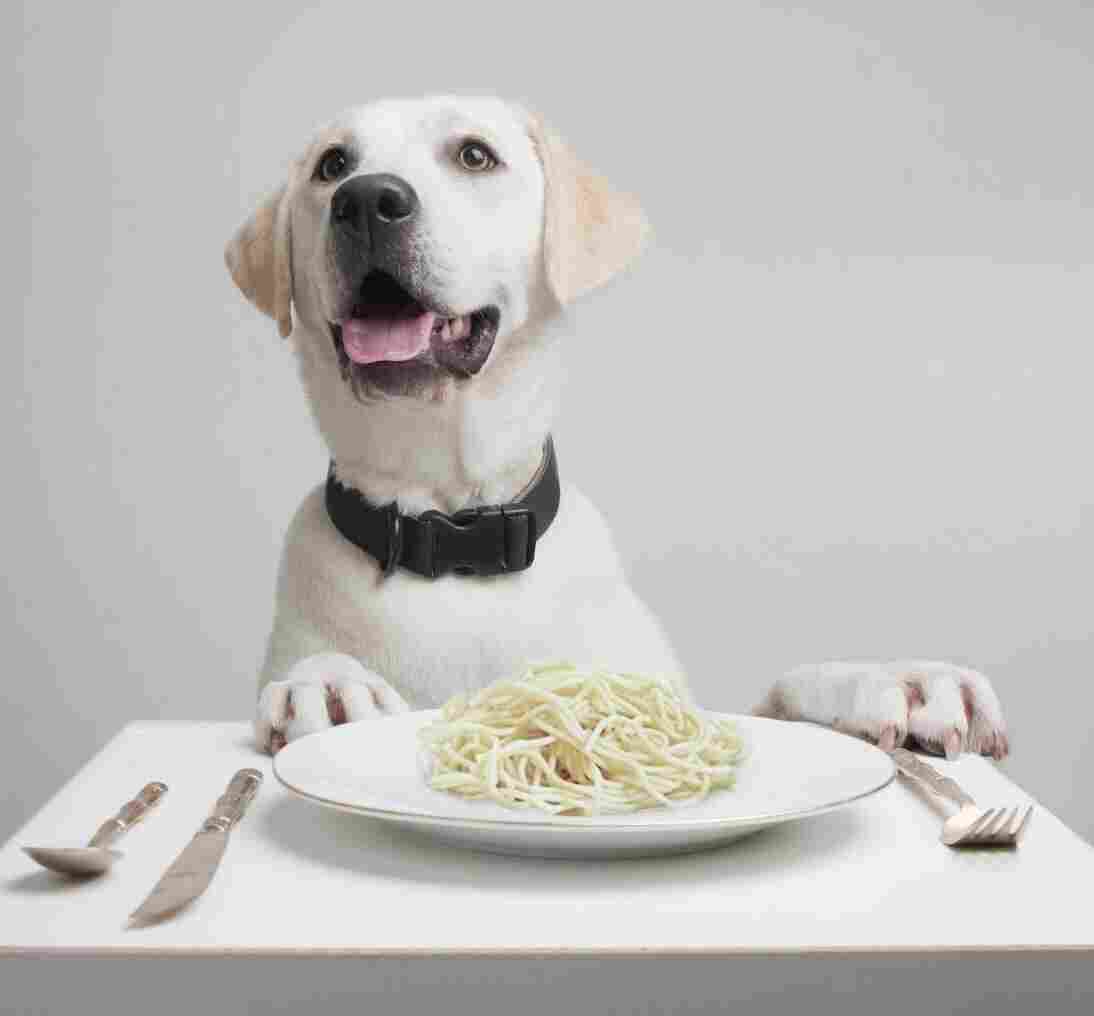 Got spaghetti? Dogs digest starch more efficiently than their wolf ancestors, which may have been an important step during dog domestication. Lauren Solomon/iStockphoto.com/Nicholas Moore /Courtesy of Nature hide caption 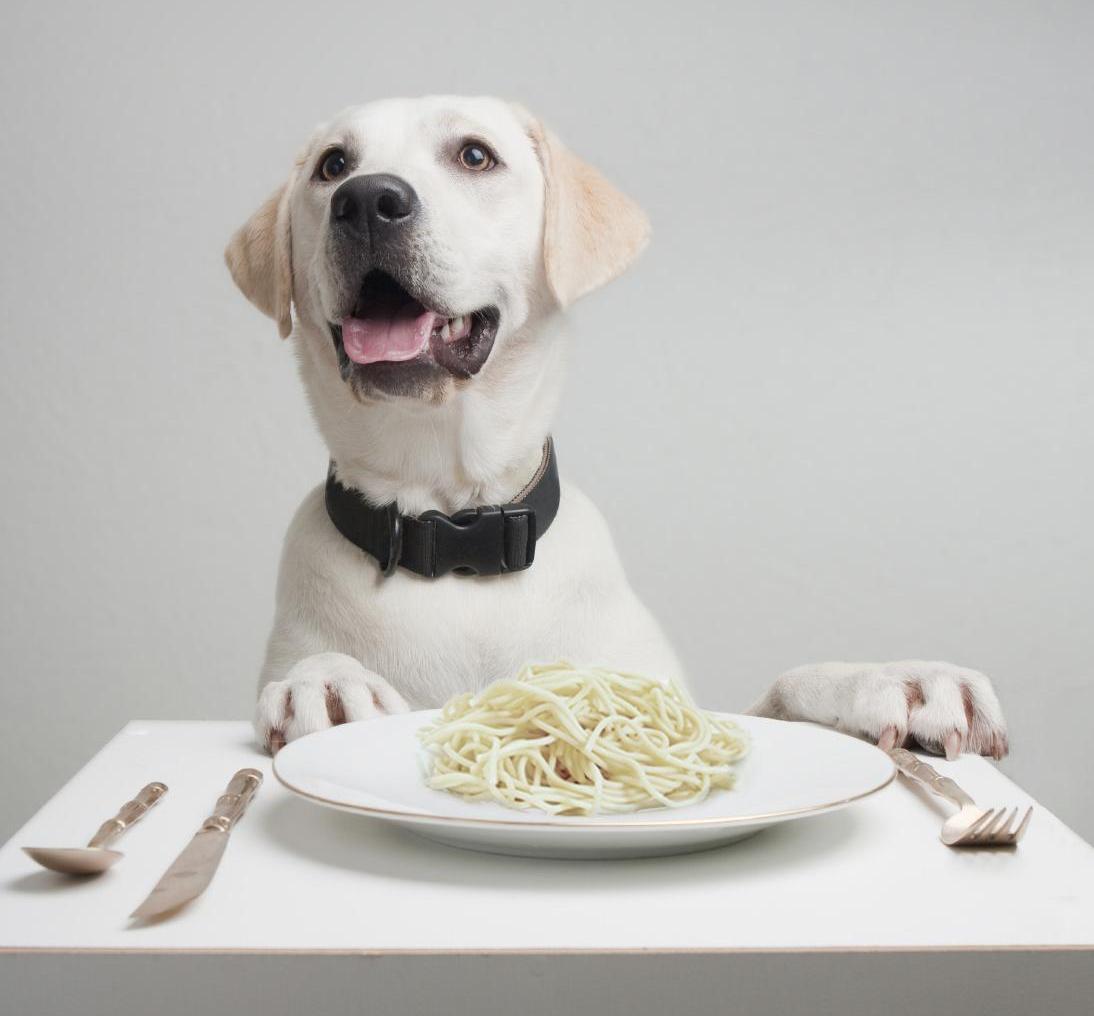 Got spaghetti? Dogs digest starch more efficiently than their wolf ancestors, which may have been an important step during dog domestication.

These days, a trip down the dog food aisle of your local pet store or supermarket can be a little overwhelming. There are hundreds of brands out there, catering to – let's be honest – every dog owner's taste: everything from generic kibble to organic nuggets.

There are even dog food cookbooks and specialty gourmet shops for people who want their pets to eat as well – or better – than they do.

How did we get here? The first step happened thousands of years ago, when meat-eating wolves evolved to tolerate people – and their more starchy, plant-based diet.

If you listen to my story on Morning Edition, you'll hear about Erik Axelsson. He's an evolutionary geneticist at Uppsala University in Sweden. (You'll also hear some pretty cool wolf howls.)

Now, dog food wasn't on Axelsson's mind when he started looking for genetic differences between dogs and wolves. During his research, Axelsson found changes between wolves and dogs in genes related to the nervous system. But he also noticed something else: "Three key genes involved in the digestion of starch also look differently in dogs and wolves."

Axelsson says he expected to find differences in nervous system genes since dogs behave very differently from wolves. But the ability to digest starch?

"That was surprising," Axelsson says. "I mean, no one's really been hypothesizing about any such changes. On the other hand, it makes sense."

It makes sense because some researchers, including Axelsson, speculate that wolves first became domesticated when people settled down and started farming.

The hungry wolves would have been attracted by their garbage dumps full of food scraps. But Axelsson says to take advantage of this convenient new food supply, the wolves would have to adapt not just to being near people, but also to eating their food, which now included starchy grains and vegetables.

So any wolves who could digest starch would have had an advantage. Axelsson thinks today's domesticated dogs are probably descended from them. His comparison of the wolf and dog starch genes are published this week in the journal Nature.

UCLA evolutionary biologist Robert Wayne has very different ideas about how and when dogs became domesticated. But he says Axelsson's findings about starch digestion are fascinating new piece of the story.

Wayne believes dogs and people got together more than 30,000 years ago, when we were still hunting, not farming. He says it could have been the leftover animal carcasses that drew wolves to humans.

Then, when farming started, it wasn't just dogs that had to deal with a more starchy diet. "Humans might have likewise adapted to such carbohydrate-rich diets, after they transitioned from more of a meat-eating diet," Wayne says.

Axelsson says because dog and human history is so closely tied together, there may be other examples of our adapting in similar ways. This makes him think that studying dog genetics could provide insights into human physiology and disease.

And as dogs have adapted, so has dog food. Most brands are relatively high in carbs, and have a lot less protein than meat.