Accessibility links
Haul Out the Haggis, It's Time to Celebrate Burns Night : The Salt Across Scotland and around the world, poetry lovers gather in appreciation of 18th century bard Robert Burns. Central to the menu of all these Burns Suppers is, of course, haggis, paraded into the room on a silver platter.

Haul Out the Haggis, It's Time to Celebrate Burns Night

Haul Out the Haggis, It's Time to Celebrate Burns Night 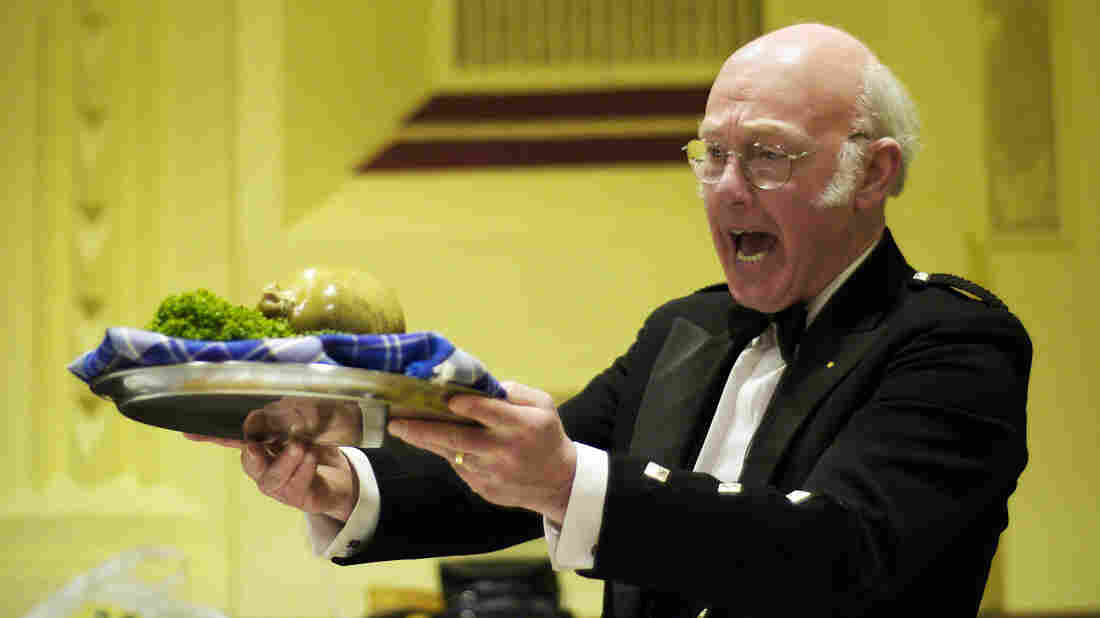 Before serving the haggis at a Burns Supper, it's tradition to address it by reciting Robert Burns' "Address to a Haggis" which begins "Fair fa' your honest, sonsie face, Great chieftain o' the pudding-race!" sneeu via Flickr hide caption 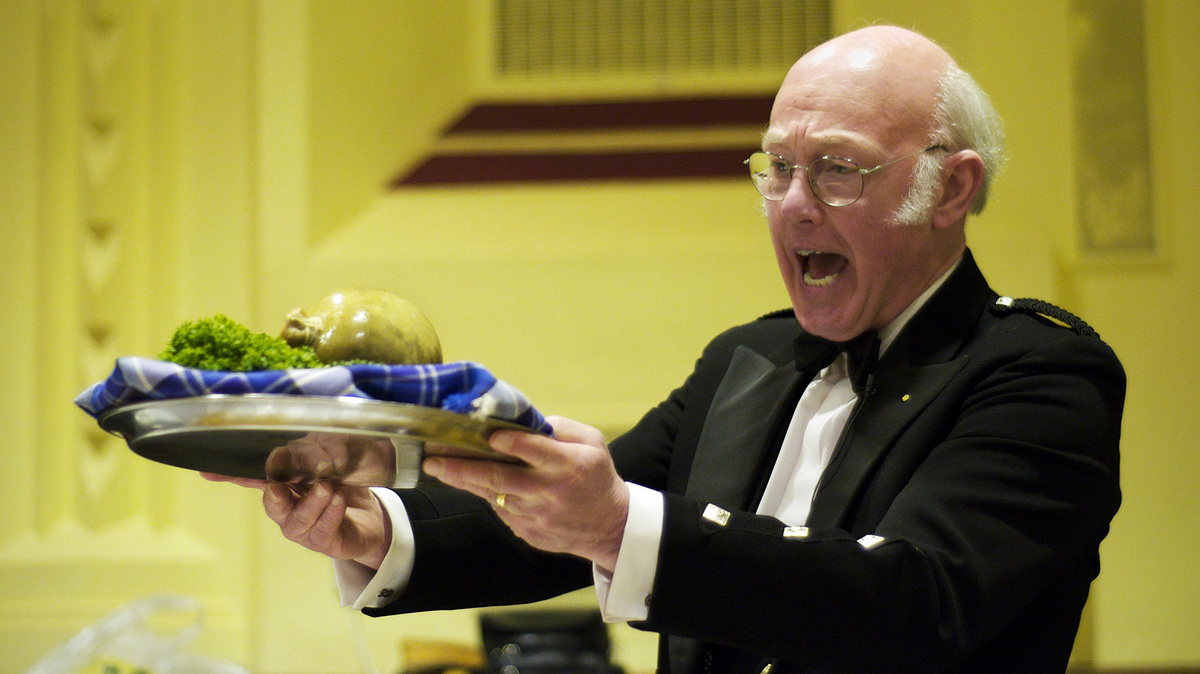 Before serving the haggis at a Burns Supper, it's tradition to address it by reciting Robert Burns' "Address to a Haggis" which begins "Fair fa' your honest, sonsie face, Great chieftain o' the pudding-race!"

Don't fear the haggis. Just think of it as a big, round sausage. That's what it is anyway.

Haggis is Scotland's national dish and every year on (or near) Jan. 25, it plays the starring role in Burns Suppers held around the world in celebration of the Scottish poet Robert Burns on his birthday.

Technically, it's the heart, liver and lungs of a sheep mixed with suet, oatmeal and seasoning and boiled in a bag. Yes, said bag was traditionally the sheep's stomach, but modern haggises are frequently prepared in sausage casing. It's much tastier than you might think. As one Scottish friend puts it, haggis is "a dish that makes the worst-sounding combination of meat taste fantastic."

It's central to the Burns Supper, paraded into the room on a silver platter and accompanied by bagpipes. Before cutting and serving haggis, a designated guest first addresses it, reciting Burns' poem of appreciation for the "Great chieftain o' the pudding-race." In a mock heroic style, the verse describes the haggis as worthy of grace and a glorious sight, tasting better than a French ragout or fricassee, and that "if ye wish her gratfu' prayer, Gie her a Haggis!" 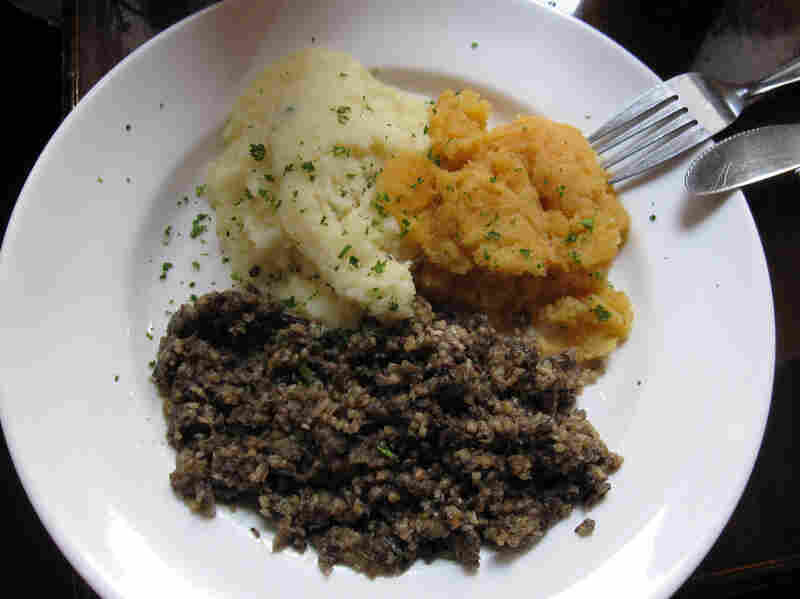 Haggis is traditionally served with mashed neeps and tatties, or turnips and potatoes. Bernt Rostad via Flickr hide caption 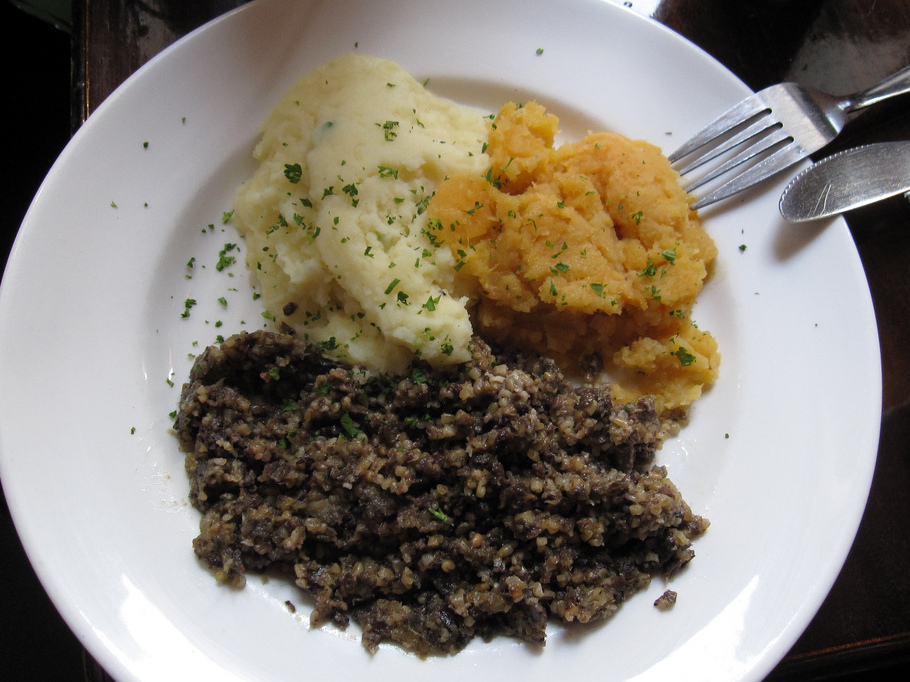 Haggis is traditionally served with mashed neeps and tatties, or turnips and potatoes.

With his "Address to a Haggis," Burns elevated the worth of a peasant food. "Haggis was really a meal of the working man – the people who didn't have much – because when a sheep was killed, they would cut it up and use everything," says Tony Grogan, president of the Robert Burns Association of North America and a Scottish ex-pat.

For the first recorded Burns Supper, which occurred on July 21, 1801, the fifth anniversary of the poet's death, nine of his friends gathered to eat and toast the poet. The meal featured haggis as well as sheep's head, now out of style. Celebrations were held twice a year on both his birth and death date from then until 1809, when admirers eventually settled on his January birthday.

Modern-day Burns Supper menus stick to tradition, and regularly consist of other funny-sounding Scottish favorites like cock-a-leekie soup, made of chicken and leeks, for a starter, and clootie dumpling — a pastry with dried fruits. And you can't have the haggis without the neeps and tatties (turnips and potatoes) alongside. Then if you're lucky, there's cranachan made with oats, cream, Scotch whisky and raspberries for dessert.

Speeches, recitations and music follow or are interspersed between the meal's course, remaining fairly true to the script of the first supper. One speaker describes and expounds on a particular aspect of Burns' life, concluding with a toast "to the Immortal Memory of Robert Burns." Familiar poems such as "My Luve is like a Red Red Rose," "A Man's A Man for A' That" and "To a Mouse" are commonly recited.

At the original suppers, the Toast to the Lassies was a thank you to the woman who cooked the supper and an acknowledgement of Burns' love of the ladies. Later, it evolved into a rather snarky reflection on the differences between men and women, personalized, of course, to present company, much like a wedding toast.

But don't worry, ladies – in the modern era we get a Reply to the Toast to the Lassies. (Here's a particularly sassy one, and YouTube has dozens of examples of the variety of ways in which they can be delivered.)

And at the end of it all, guest join hands and sing "Auld Lang Syne," which Burns collected, edited and published.

So how did this humble country poet come to symbolize Scottish national pride?

"Burns died at a time of profound economic, social and political change, when writers perceived that Scottish identity was being lost," writes Rab Houston, professor of modern history at St Andrews University in Scotland. "Romantic and anti-modernist, they found in him a symbol of an allegedly uncorrupted Scotland."

By celebrating the symbols most associated with Burns, his suppers have helped to shape Scottish identity over the last 200 years.

They've also been embraced by other cultures. They're particularly popular with Russians and have been cross-bred with the Chinese New Year in Vancouver to create Gung Haggis Fat Choy.

An estimated 12,000 to 15,000 Burns Suppers are held worldwide each year. There is no compiled list of them, since anyone can organize one. Scottish heritage societies and Burns clubs usually hold formal Suppers, but your local Scottish or Irish pub probably holds them, too.

Why so much adoration for one guy? Grogan simply says, "He spoke to the common man. He just hit the right note."