Accessibility links
A Quest For Real Beer, Without The Gluten : The Salt Malted wheat and barley add flavor and heft to most beers, but they also contain gluten, making beer off limits for people with celiac disease and gluten sensitivity. For those looking for gluten-free options for Super Bowl Sunday and beyond, good news: There are more choices than ever before for flavorful, full-bodied gluten-free beer.

More and more gluten-free beers are entering the marketplace. We asked a librarian with celiac disease for her list of favorites. Bill Chappell/NPR hide caption

More and more gluten-free beers are entering the marketplace. We asked a librarian with celiac disease for her list of favorites.

Anyone who gives up gluten, either by choice or medical necessity, will inevitably feel a twinge of regret bidding adieu to bread, pasta or pastries. But for some, the greatest hardship may be saying no to beer — especially at times like Super Bowl Sunday, when having a cold one in hand is part of many people's game day tradition.

So it's no small thing that a growing number of brewers are offering gluten-free beers that are both tasty and satisfying.

They're joining other food and beverage producers who've discovered that gluten-free is now a $4.2 billion market, as the ranks of people with celiac disease and gluten sensitivity grow.

While many gluten-free beer drinkers complain of the lack of quality or variety, the choices have grown steadily. Consider that in 2007, when the Great American Beer Festival officially added a gluten-free category to its competition, only eight beers were entered. At last year's festival, the category drew 20 entries.

When I tell Abbey Potter, a librarian at the Library of Congress who was diagnosed with celiac disease five years ago, that several brewers are now focused only on making good beer without gluten, her answer is immediate: "God bless them."

Potter learned to appreciate craft beer during her college years in Kalamazoo, Mich. She eventually took up home brewing, buying equipment that later sat unused. For her, the treat of drinking Kalamazoo-made Bell's beers in Washington, D.C., was short-lived; she was diagnosed with celiac not long after Bell's hit local shelves.

So I invited Abbey to join me in a tasting of gluten-free beers. I was a bit dubious of the quality we'd find, knowing that malted wheat or barley, which are responsible for the gluten in most beers, also add a lot of flavor and heft. But Abbey had recently said she'd found options that taste like "real" beer, and I had tracked down a couple I wanted to try, as well. 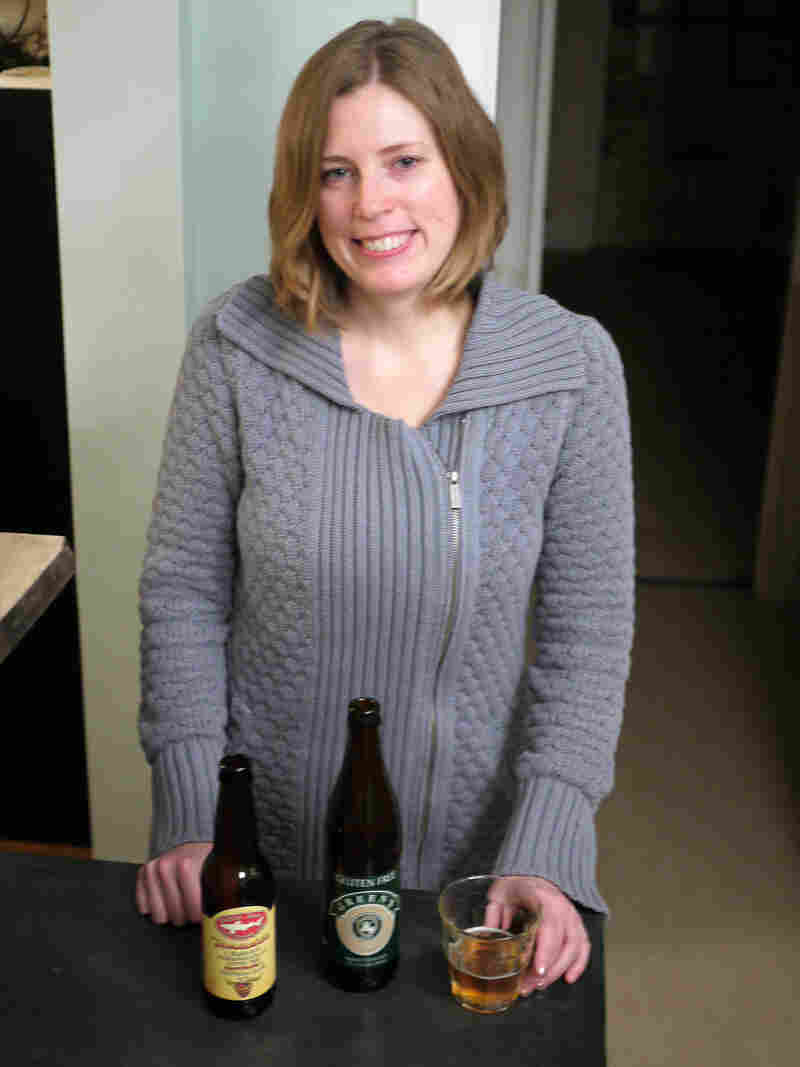 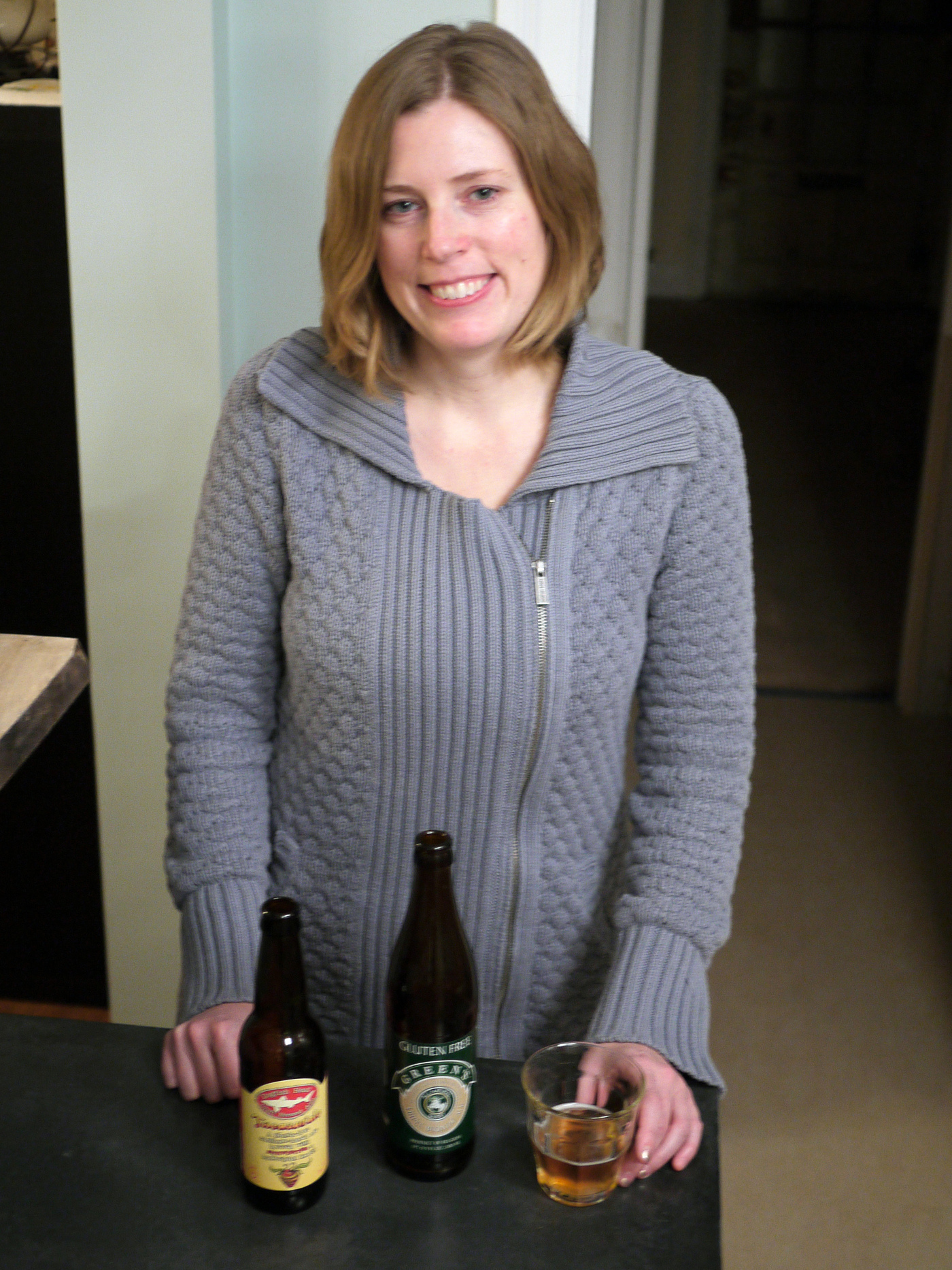 "God bless them," Abbey Potter says of craft brewers who are making gluten-free beer. Potter was diagnosed with celiac disease several years ago.

Most brewers use one of two strategies for making beer without gluten. Some avoid cereals like wheat, barley and rye, substituting sorghum, rice or fruit. Others brew with barley and then extract gluten from the beer. Drinkers who are highly sensitive to gluten often avoid these beers. But the process removes enough of the protein to be deemed gluten-free according to international standards. And Abbey says she hasn't had a problem with them.

"They're trying to give you the real experience," she says. "Because that's what you miss the most when you have to drink gluten-free beer: feeling like you're having a beer."

Some of the following selections are widely available; some are more limited, owing to seasonal releases or distribution deals.

This beer, from a brewery whose owner is gluten-intolerant, replaces malted grains with sorghum and brown rice extract. Like a traditional pale ale, it has a floral bitterness that brings craft beer to mind.

"It has that little bitterness to it, which is nice," Abbey says. "Because sorghum can be kind of sweet."

Featuring strawberries and sorghum along with hops, this crisp ale is a nod to the sweet and sour flavors of a Belgian lambic. The fruit adds a little complexity without taking over — "it smells like beer," Abbey says.

"It would definitely work for me in a ballpark, picnic situation — and I would not feel like a weird outcast," she says. "I think they have a good recipe."

Omission comes from Craft Brew Alliance, which also produces Widmer Brothers and other malted beers. To reduce the gluten content, the brewer uses low-protein barley and adds an enzyme called Brewers Clarex, which breaks down gluten. The end product isn't 100 percent gluten-free, though, and Abbey could feel the effects of it after drinking it.

But she enjoyed the flavor enough to keep at it, anyway.

"That tastes more like beer to me," Potter says. "It tastes malty. Which is hard" when you're making beer without gluten.

This Belgian beer pours with a rich, full head. Like some of our other selections, hops and a relatively high alcohol content help it avoid the sweet and watery qualities of other gluten-free beers.

"This has that refreshingness — you drink it, it makes you go, 'Aah,' " Abbey says.

Made with millet, buckwheat and rice, Quest has a full body that's made more complex by Belgian yeast.

"You can see there's something in there," Abbey says. "It looks like a craft beer; it's not clear. It has a nice bitterness to it, too ... it's like an orange coriander beer."

And the trading of gluten-free home-brewing tips online, along with gluten-reducing enzymes like Clarex, means that celiac beer-lovers can tinker with their own recipes, as well.

In fact, Abbey says, she and a friend recently used her brewing kit to make a batch of gluten-free beer. After considering roasted millet and malted buckwheat, they settled on sorghum extract — and a large dose of hops.

"It was delicious," she says. "It made me think that beer was possible again."