Accessibility links
Ukrainian Comfort Dish Chicken Kiev Claims French Parentage : The Salt The dish that got its start in France and gained its popularity in America is dying out in its namesake city. Ukrainian chefs say only they make the real deal and are trying to save chicken Kiev, even as urban dwellers turn to exotic foreign cuisine like pizza. 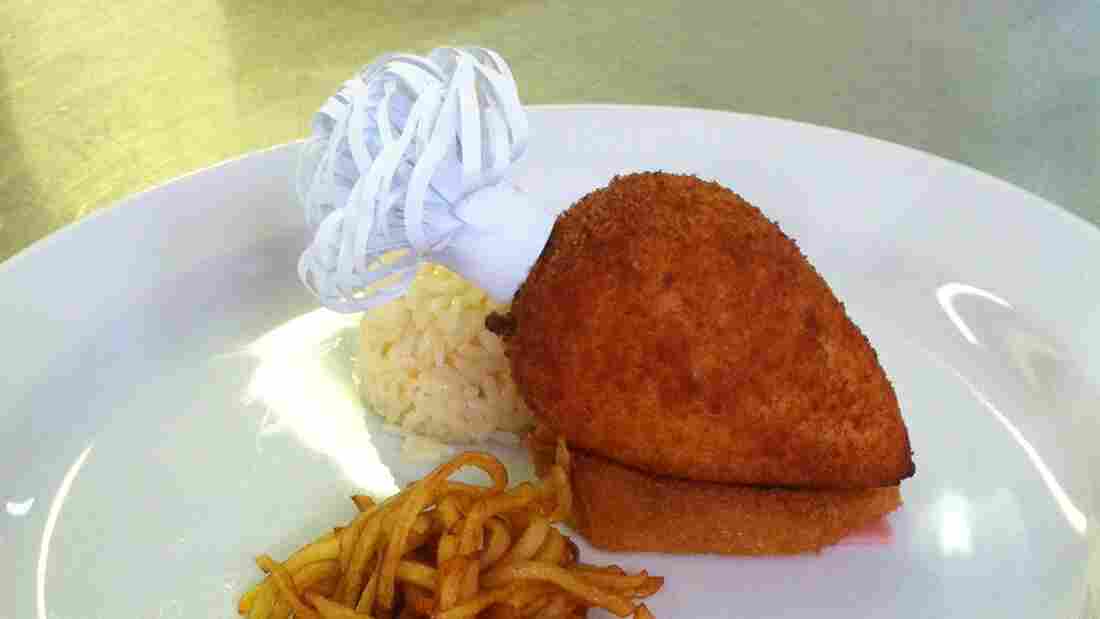 Chicken Kiev made by Viacheslav Gribov, head chef at Kiev's Hotel Dnipro, comes with a small bone sticking out one end. If done properly, some of the butter inside will remain unmelted. Amy Guttman hide caption 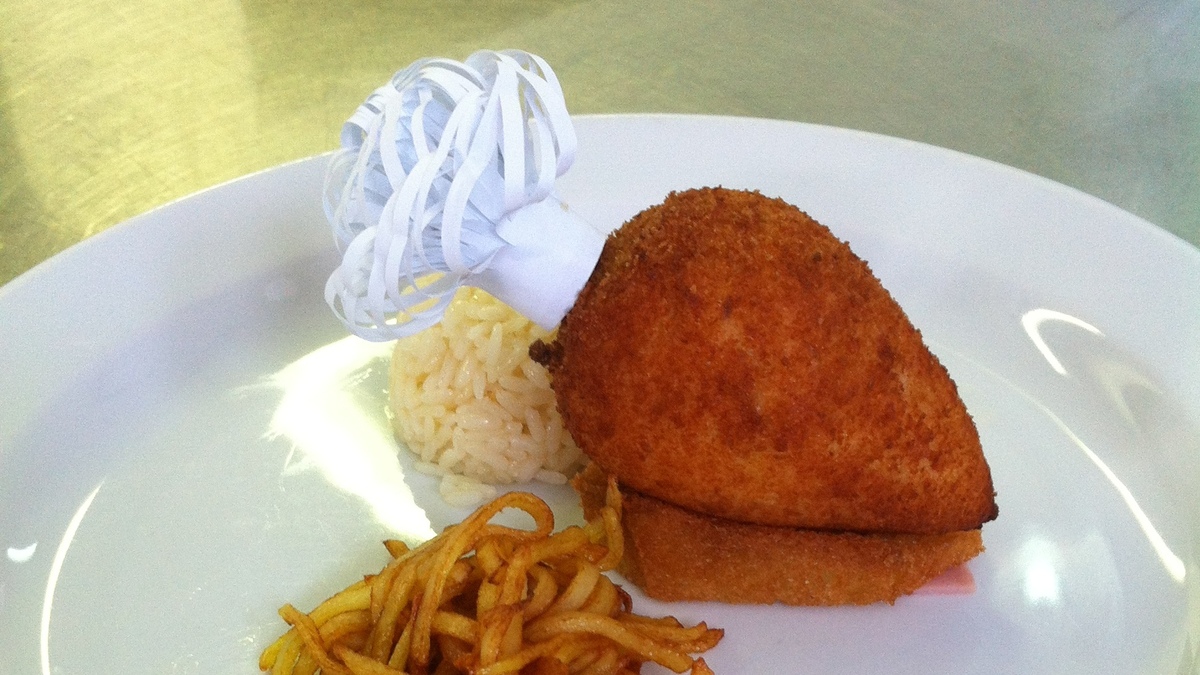 Chicken Kiev made by Viacheslav Gribov, head chef at Kiev's Hotel Dnipro, comes with a small bone sticking out one end. If done properly, some of the butter inside will remain unmelted.

You'd be forgiven for thinking chicken Kiev got its start in the Ukrainian capital. After all, a hearty dish of chicken filled with butter, wrapped in bread crumbs, and deep fried is the perfect meal to withstand subzero temperatures and cold winds blowing across the Dniepr River.

Ukrainian chefs say they have the only authentic recipe for the dish, but they concede that chicken Kiev, despite its name, has a far more sophisticated provenance: It's French.

The French connection isn't as odd as it first appears. Viacheslav Gribov, head chef at Kiev's Hotel Dnipro, says that during the late 1840s, Russian royalty sent chefs to Paris to learn from the best. And they returned with a recipe for a dish they called Mikhailovska cutlet.

"The dish was made in Paris with veal," Gribov says, "but in Moscow, it was made with chicken. At that time, chicken was more expensive and considered more of a delicacy."

Chicken Kiev was served in posh dining rooms and later appeared on the menus of official dinners in the Soviet Union, but it needed American immigrants to make it popular.

In the years after World War II, chefs at white tablecloth restaurants, like the Russian Tea Room in New York, began putting the dish — renamed chicken Kiev — on menus to lure Russian and Ukrainian immigrants who had settled in that city in large numbers.

Back in Kiev, though, chicken Kiev wasn't common until visiting tourists began requesting it in the city's restaurants in the 1960s. "Chicken Kiev made Kiev famous," says Gribov.

Ukrainian chefs like Gribov have strict rules for the dish, and they decry variations. They say neither the Russian version stuffed with cheese, nor the American and British recipe calling for garlic and parsley, is the real deal. "This began as a dish for dignitaries meeting one another. You would never serve them garlic," he says.

Gribov should know. He's been serving the dish since 1978 to some of the world's biggest political heavyweights, including Fidel Castro, Mikhail Gorbachev and President Clinton.

But the authentic Kiev recipe, Gribov says, calls for only butter inside, and if done properly, a bit of butter remains unmelted when served. "We don't just learn how to make the dish; we also learn a special way of serving and cutting it to avoid butter splashing out," he says.

The Ukrainian version comes with a small bone sticking out that keeps the butter sealed inside. It resembles a conical corn dog and delivers the same satisfying fried, crunchy outside and soft center.

During the 1960s and 1970s, Kiev tourists made the dish popular, and locals quickly followed. But, like so many foods, chicken Kiev has fallen out of fashion. It's now a convenience item, relegated to some supermarkets and fast-food restaurants in the city, and has all but disappeared from Ukrainian menus.

"I'm worried that very few chefs know how to make it," says Gribov. "Young chefs are not being trained how to make chicken Kiev. I'm thrilled every time someone orders it."

These days, he says, Kiev's urban dwellers want exotic, international cuisine. "People order lasagna, pizza. They want Mediterranean or Asian food. Many people have never left the country and want to experience something foreign through food."

Ironically, one of those foreign places is seeing a revival of the dish. In London, there's a yearning for the comfort foods of yesteryear, and chicken Kiev is back on West End menus, with new ingredients, such as truffles and a mozzarella filling.

Gribov may prefer authentic chicken Kiev, but adding a fresh twist or two may be the key to keeping the dish alive.