Accessibility links
International Culinary Competition Gold Eludes Americans Again : The Salt There's one honor that's long eluded Americans at the top of the culinary field: the coveted Bocuse d'Or. This year was no exception, though Team USA made a valiant effort with an Appalachian-inspired menu that included squash, ham and mushrooms. 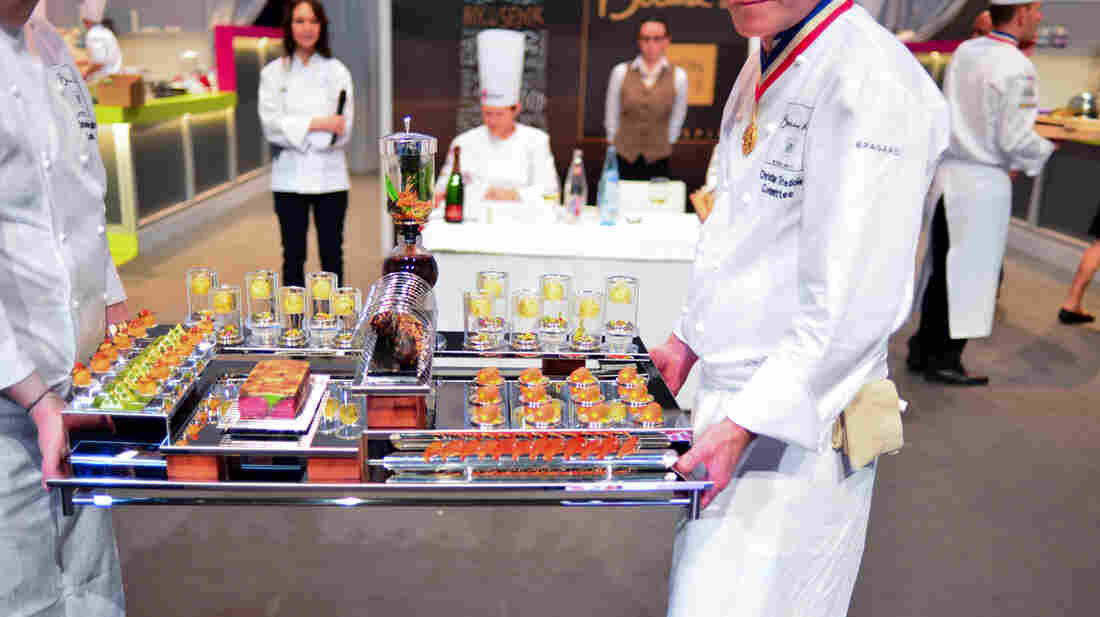 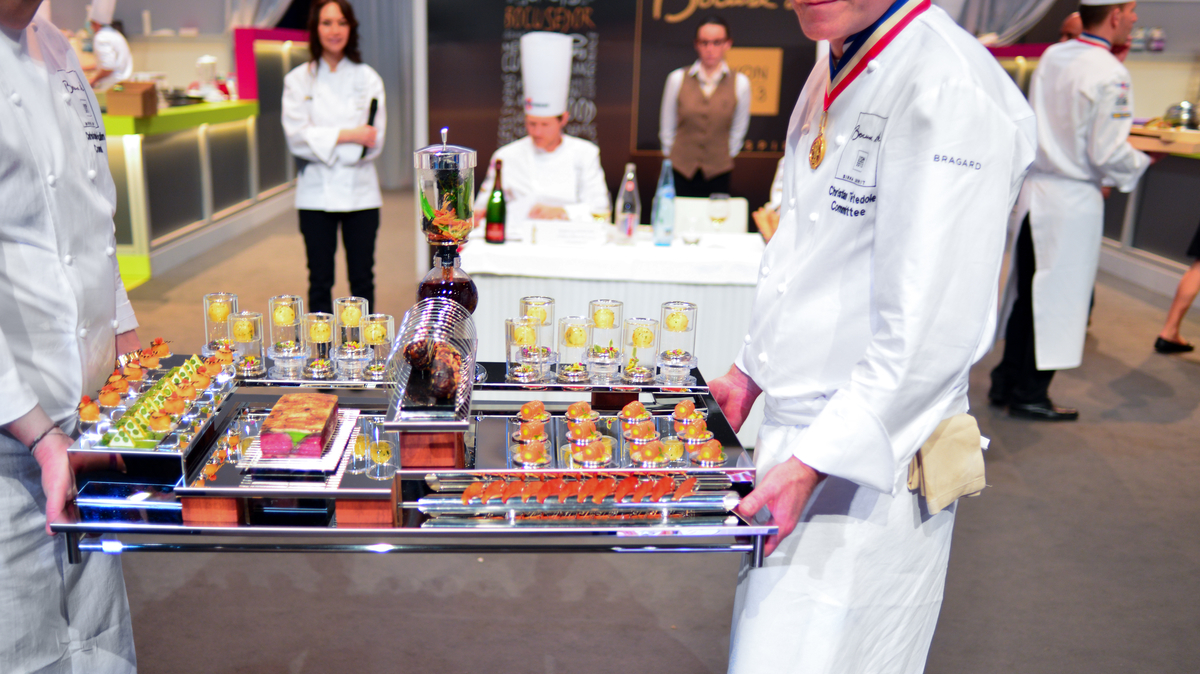 The plating of Team USA's Irish beef dish was based on Frank Lloyd Wright's Fallingwater house.

Americans may have perfected food television and exported our fast-food tastes around the world, but we still haven't made it to the podium in the so-called Olympics of Cooking. The prestigious Bocuse d'Or chef competition, held in Lyon, France, on Tuesday and Wednesday, saw Team USA unable to break its dry streak, with a seventh-place finish behind winners France, Denmark and Japan.

The competition is a two-day event that's part Top Chef with a dash of World Cup. Each team of two chefs has about six hours to prepare a meat dish and a fish dish that will wow judges with their taste, creativity and presentation.

This year the U.S. team got serious about winning and holed up for months in a nuclear bunker, prepping for their big moment. Richard Rosendale, head chef at the Greenbrier Resort in White Sulfur Springs, W.Va., battled it out in 2012 to win the honor of representing his country, along with commis, or assistant chef, Corey Siegel. For the past year, the two have been coached by luminaries including Thomas Keller, Daniel Boulud and Jerome Bocuse, son of the competition's namesake, Paul Bocuse.

This year's competition was streamed live online and drew a wide following on Twitter. Representatives from 24 countries competed in front of a rowdy audience. Each team had to make two dishes based on Irish beef, European blue lobster and turbot (a flatfish), ingredients chosen in advance by the judging panel. 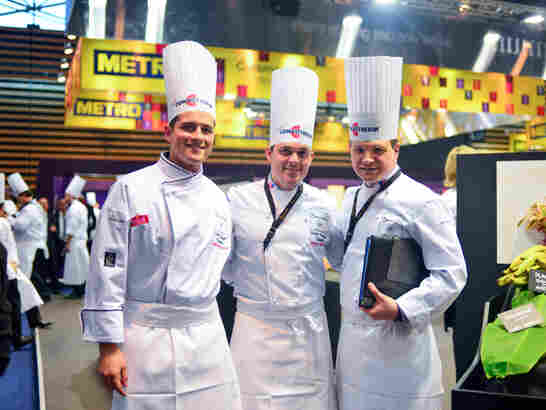 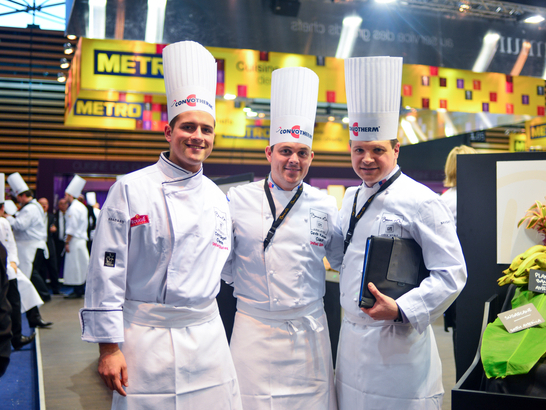 The U.S. has always been an underdog at the event and no American chef has ever placed higher than sixth, as Andrew Friedman chronicled in his 2011 book, Knives at Dawn. Fans this year were optimistic, though, chanting "USA-USA-USA" and waving signs. Fans from other countries rallied with marching bands and vuvuzelas.

Rosendale had reason for hope after the fanfare following the remarkable dish that won him a spot on the team. The platter was inspired by Frank Lloyd Wright's Fallingwater house, located near his hometown in Pennsylvania. Rosendale created a similar platter for the meat portion in Lyon. American coach Gavin Kaysen says Rosendale tried to mimic the best parts about the iconic house.

"His plate has that inspiration and that flow, and he included foods they have there, like wild mushrooms," Kaysen says.

At the international competition, chefs are required to present a dish that's emblematic of their country. It's posed a problem for some U.S. competitors in the past, as American cuisine can be hard to define.

Rosendale decided to stick with what he knew and focused on Appalachia. For the fish portion, he poached and glazed the turbot with au jus. Beside it, he added cider-poached butternut squash, lobster mousse with cider, Virginia ham, black truffles and a "wild mushroom explosion" that was wrapped in consomme gel. His "Fallingwater" beef was a twist on pot roast with a hickory-grilled fillet that included asparagus, potato dumplings infused with beef broth and slow-roasted carrots.

His menu was crafted over the course of a year. Rosendale and Siegel also prepared themselves for the chaos of competition by piping in recorded sound of the crowd. They worked in a custom kitchen that was built inside a former Cold War bunker designed for Congress at the Greenbrier.

"We actually took chalk and chalked out on the floor basically exactly where everything was going to be," Rosendale told CBS.

There were also new challenges this year, as the competition started to resemble a reality show. For the first time, chefs weren't allowed to bring all of their own ingredients; instead, they were given a short time to shop at a local French market for their side dishes. Teams also had to plate their fish on 14 separate dishes to mimic the actual restaurant environment.

Despite finishing off the medal stand, adviser Keller said he was happy with the team's performance.

"We increased three positions from the competition in 2011 so we are moving in the right direction," he said.