Accessibility links
Oh, Baby: Squeezable Snacks Might Be Tough On The Teeth : The Salt Those cute little foil pouches of organic food for toddlers may pose hidden dangers for new teeth and developing mouths. But they may not be any more of a risk than the frequent use of sippy cups and bottles, dentists say.

Oh, Baby: Squeezable Snacks Might Be Tough On The Teeth

Oh, Baby: Squeezable Snacks Might Be Tough On The Teeth 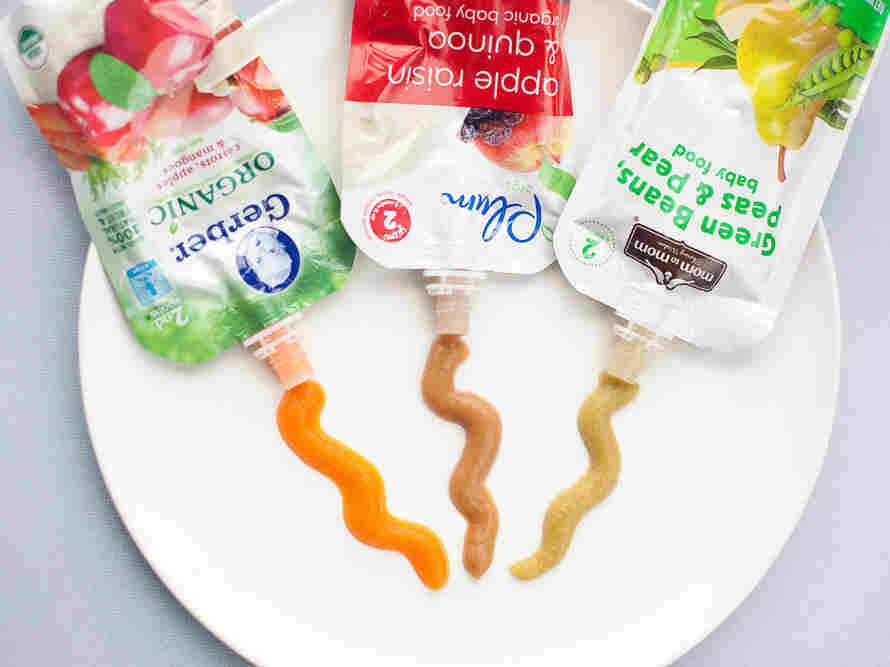 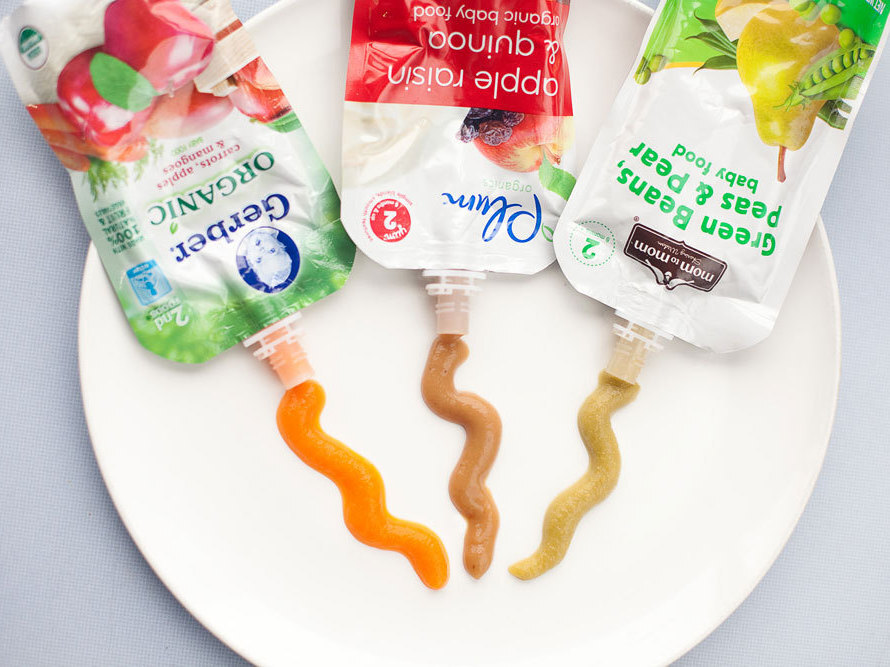 Squeeze me with caution.

Those squeeze pouches full of organic pureed food in clever combos like plum, berry and barley have become a lifesaver for busy parents.

The colorful foil packets with the built-in feeding tips have only been on the market about five years. They cost about twice as much as the average prepared baby food in jars — nearly $2 a pop — but many people say they beat the old-fashioned stuff by a spoon, because they don't require refrigeration or heating or even a utensil. And they appeal to kids who would rather run around than stop and eat. (We've even witnessed older kids snag their younger siblings' fun-to-squeeze snacks.)

These assets make them popular at playgrounds, parks and with car seat jockeys everywhere, but is there a downside to all that slurping?

Actually, there might be a couple of downsides for developing teeth and mouths, but they may not be any worse in some ways than what lots of toddlers already do: suck on sippy cups full of milk or juice all day.

"The constant exposure of sugar on their teeth is detrimental," says Paul Casamassimo, the oral health research and policy center director at the American Academy of Pediatric Dentistry. "My concern would be if the child walks around with this little pouch, then they might be doing the same thing," he says.

In fact, the academy recommends ditching the sippy cup and going straight from bottle to cup between 12 and 15 months because of the potential risk of tooth decay. Casamassimo calls them "baby bottle methadone."

Carbohydrates in all foods are used by bacteria to produce acid, and the acid eats away at the enamel of the teeth, creating the potential for cavities — a growing problem among all children, he says.

And the pouch food, because of its consistency, may be particularly tough on teeth if it's allowed to sit there for long periods. "We know that tends to stick on teeth and prolong the opportunity for the bacteria to build," he says.

Brushing kids' teeth twice a day and making them rinse with water after eating the pouch foods or drinking juice can help, Cassamassimo says.

But what about potential injuries to children if the plastic feeding tip should jam into their teeth or gums while they're running around?

At this point, the pouch may be too new to show up in injury reports, Casamassimo says.

A recent nationwide survey shows that feeding products with similar shapes and targeted at the same age group can be dangerous. Between 1991 and 2010, more than 45,000 kids under age 3 ended up in the emergency room after injuring themselves with a bottle, pacifier or sippy cup. Most of the time, they were running while holding the product, according to the report from the Nationwide Children's Hospital in Columbus, Ohio (where Casamassimo heads the dental department).

"A lot of parents baby-proof their house but don't ever think about the possibility of an injury related to these products," Sarah Keim, lead author of the study and a researcher at the hospital, told USA Today this summer.

Theoretical risks aside, food pouches are convenient, nutritious (spinach-pear-pea puree, anyone?) and a booming business.

Since Plum Organics of Emeryville, Calif., introduced the pouches back in 2008, lots of other competitors have sprouted up, including big names in baby food, like Gerber. "Plum Organics conservatively estimates that its sales of pouches for babies, toddlers and children will be $53 million in 2012, up from around $4,800 when it put out its first pouches in 2008," according to The New York Times.

Sangita Forth, vice president of brand marketing at Plum Organics, tells The Times that she loves giving her 3-year-old daughter and 5-year-old son the pouches as snacks. But when she substitutes a meal, she has "mixed feelings," she tells the paper:

"Is it the ideal scenario? No. But as a mom, I know at least I'm giving them a healthy alternative. The mind-set now isn't that you have to be the perfect mom, but that you're doing the best you can."

Nutritionally, they beat the drive-thru option on the way to soccer practice. But as the dentist says, remember the toothbrush. Or for older kids, try xylitol-sweetened gum.