Accessibility links
How To Save A Public Library: Make It A Seed Bank : The Salt A small-town library in Colorado is lending more than just books. Patrons can now check out seeds and farm them. After the crops are harvested, the patrons return the seeds from the best fruits and vegetables so the library can lend them out to others. 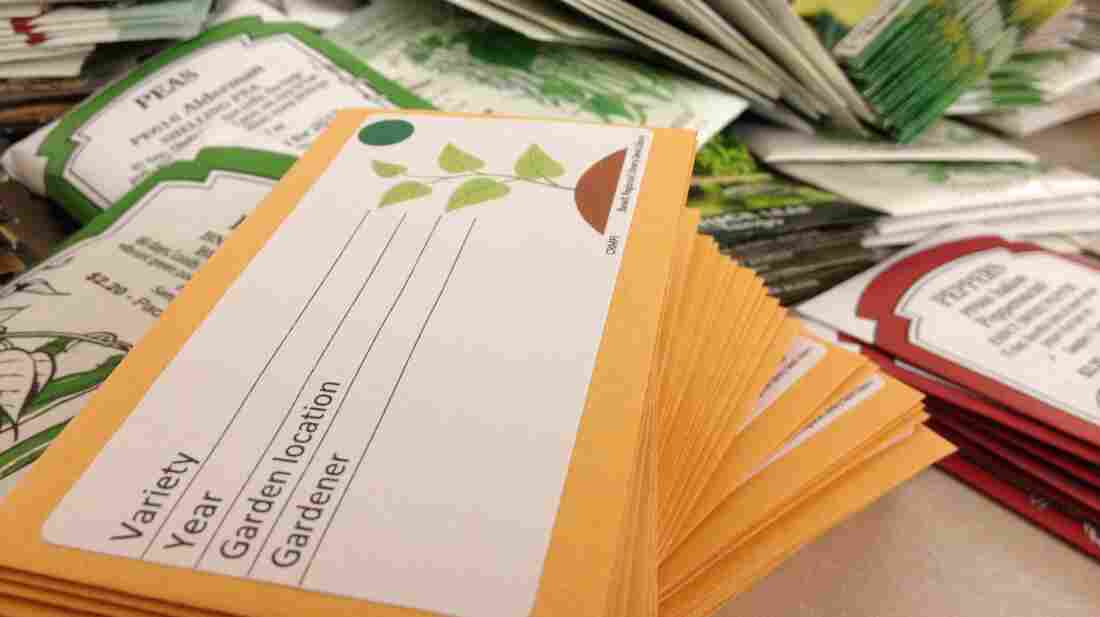 The seed library is a partnership between the Basalt Public Library and the Central Rocky Mountain Permaculture Institute. Seed packets encourage gardeners to write their names and take credit for their harvested seeds. Courtesy of Dylan Johns hide caption

Despite the cold and snow, some signs of spring are starting to break through in Colorado. The public library in the small town of Basalt is trying an experiment: In addition to borrowing books, residents can now check out seeds.

In a corner of the library, Stephanie Syson and her 4-year-old daughter, Gray, are just finishing a book with a white rabbit on the cover.

When Gray approaches the knee-high shelves filled with seed packets, she zeroes in on a pack labeled "rainbow carrots."

"We just read two books with bunnies in them, so we've got bunnies on the brain," Syson says.

Syson flips through a wicker bin labeled "carrots" and offers other varieties to Gray, like "atomic red" and "cosmic purple."

Here's how it works: A library card gets you a packet of seeds. You then grow the fruits and vegetables, harvest the new seeds from the biggest and best, and return those seeds so the library can lend them out to others.

Syson says tending a garden in Western Colorado can be frustrating. The dry climate, alkaline soils and short growing season keep many novices from starting. She'll take seeds from the plants that withstand pests and persevere through drought.

"If you save seed from those plants, already, in one generation, you will now be able to grow a plant that has those traits," Syson says.

The seed packets are a novelty within the library's more mainstream collection of books, CDs and DVDs.

The library's director, Barbara Milnor, says in the age of digital, downloadable books and magazines, the tangible seed packets are another way to draw people in.

"You have to be fleet of foot if you're going to stay relevant, and that's what the big problem is with a lot of libraries, is relevancy," she says.

Milnor says that while a library may seem like an odd location for a project like this, seeds and plants should be open to everyone. That makes a public library the perfect home for a seed collection. The American Library Association says there are at least a dozen similar programs throughout the country.

Back at the front desk, Syson and Gray place the rainbow carrot seed packets on the counter.

Syson says the library has always been a place for her daughter to learn. The seeds just add another lesson.

"For her to see a little pot of dirt and to plant a seed into it, and then 30 days later being able to eat something from it is really exciting for her," she says. "She really enjoys seeing that whole process."

A process that now includes a trip to the local library.