Accessibility links
Animal Magnetism: How Salmon Find Their Way Back Home : The Salt When salmon are ready to leave the ocean and go back to their birthplace, they use magnetism to find their home river. But scientists fear fish born in hatcheries might have a poor sense of direction if they're raised in places surrounded by man-made objects that drown out the planet's natural magnetic field. 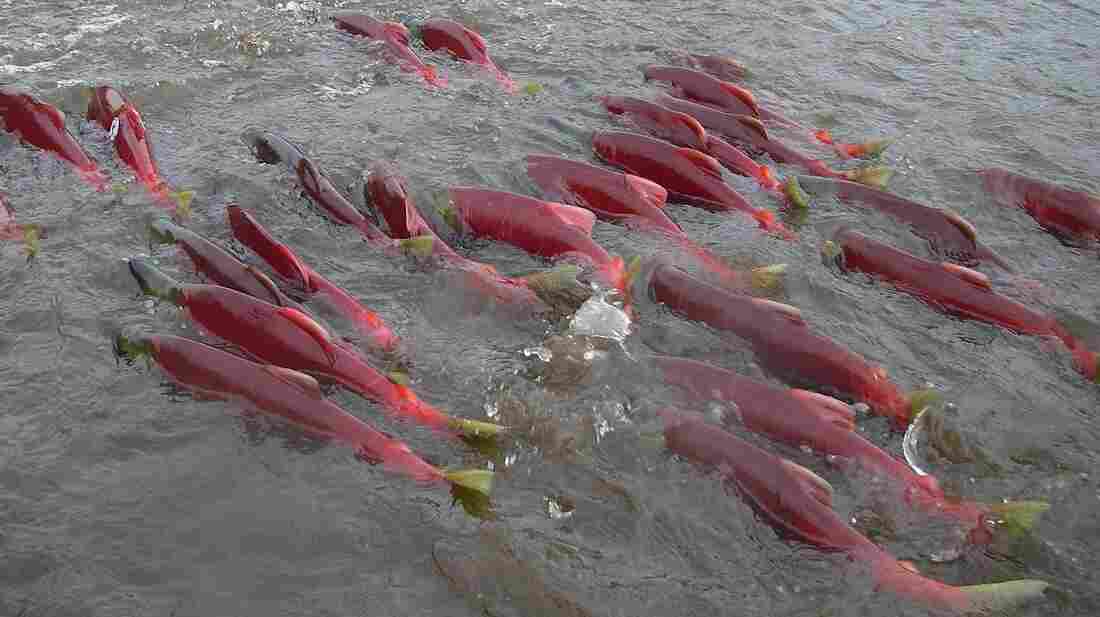 Bright red sockeye salmon swim up the Fraser River to the stream where they were hatched. Current Biology, Putman et al. hide caption 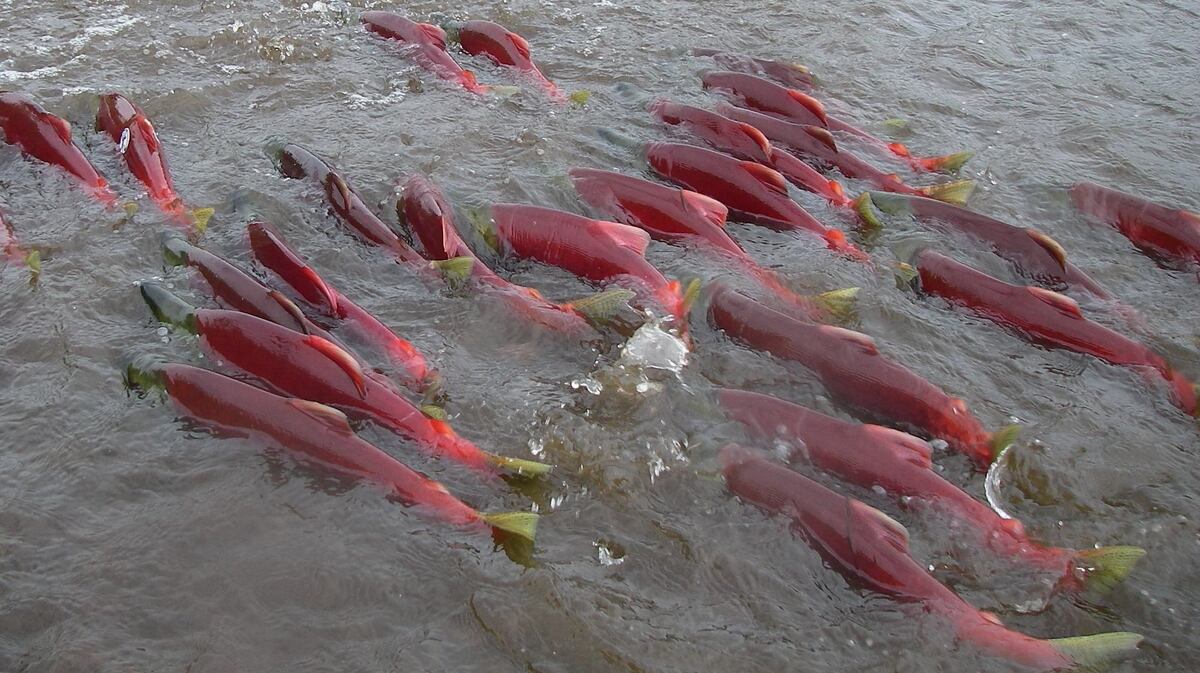 Bright red sockeye salmon swim up the Fraser River to the stream where they were hatched.

Before they end up filleted and sautéed on your dinner plate, salmon lead some pretty extraordinary, globe-trotting lives.

After hatching in a freshwater stream, young salmon make a break for the ocean, where they hang out for years, covering thousands of miles before deciding its time to settle down and lay eggs in their natal stream.

So how do these fish find their way back to their home river?

According to one theory, it's all about magnetism. When salmon are young, the theory goes, they imprint on the pattern of the Earth's magnetic field at the mouth of their native river. Years later, when the salmon head back home to spawn, they home in on that pattern. In a study published Thursday in Current Biology, the scientists behind that theory now say they have evidence that's exactly how the fish are navigating.

Magnetic detection "is one part of their toolkit for being really efficient navigators," says the study's lead author, Nathan Putman, a postdoctoral researcher at Oregon State University in Corvallis. The fish also use their sense of smell to help them locate the exact stream of their birth.

The finding could be helpful for fishery managers who'd like to predict where their fish will be and how their populations might change due to climate change and fishing pressures, Putman says.

Around the world, many salmon stocks are on the decline, and scientists would like to explain odd events, like why millions of wild sockeye salmon didn't return to Canada's Fraser River in 2009. It's possible a glitch in the salmon's navigational abilities played a role.

An even bigger concern is whether being raised in hatcheries somehow alters salmon's "internal GPS." Spawned in tanks, these salmon are released into streams and rivers and account for a large amount of the "wild" salmon that swim in the ocean and end up on your dinner plate.

Putnam worries that something about their hatchery upbringing could throw off how these salmon perceive magnetic fields. Because the Earth's magnetic field is relatively weak and can be overpowered by man-made objects, it's possible that something as simple as the iron reinforcements in the fish tanks, or nearby electrical cables, could throw off the salmon's magnetic imprinting.

"Then they might not be very good at navigating, and that could cause problems," he says.

If salmon born in hatcheries get lost on the way back home, they could end up in the wrong stream and interbreed with wild salmon populations. That's a problem, because studies suggest that hatchery-raised salmon aren't nearly as good at surviving outside captivity as their wild counterparts — and when they mate, the wild stock ends up genetically weaker.