Accessibility links
Chinese New Year: Dumplings, Rice Cakes And Long Life : The Salt Eating foods that symbolize wealth, longevity and fertility is key to the Chinese New Year, which begins this year with a New Year's Eve feast on Feb. 9. And, lucky for us, the northern Chinese tradition of making dumplings late at night has spread throughout the world. 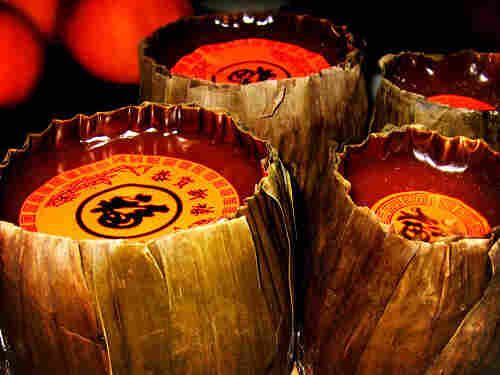 About 3,000 years ago, give or take a couple of decades, the Chinese people began celebrating the beginning of their calendar year with a joyful festival they called Lunar New Year. They cleaned their homes, welcomed relatives, bought or made new clothes and set off firecrackers. And there was feasting and special offerings made to the Kitchen God for about two weeks.

While you'd be hard-pressed to find a two-week-long celebration anywhere these days, most families in China and in Chinese communities throughout the world take a few days off when the holiday begins, one month after the Winter Solstice. This year — the Year of the Snake — it starts with a big feast on New Year's Eve, Feb. 9. Then in many homes, after the feast is cleared, the whole family gathers to make dumplings late into the night.

There are many special foods of the New Year, says E.N. Anderson, anthropology professor emeritus at the University of California, Riverside, and author of The Food of China, a book about historic Chinese government food policies.

Long noodles are traditional, and they symbolize long life. Year cakes — glutinous rice formed into shapes — are also a tradition. Peaches and peach blossoms signal fertility, he says, but one of the most important things to include is food, clothing and decorations that are red. Red paper decorations line the streets, and red packets of money are given to children on New Year's.

"Red is the color of blood and therefore life, health and strength — the color of all good things in China," says Anderson. So citrus fruits like tangerines — the redder the better — are popular, as well as dried fruits and seeds.

Traditionally, the new year was the one time of year when the Chinese would eat sweets, although in recent decades, they've adopted a more Western diet the rest of the year, he says, including, unfortunately, our penchant for sugar.

And then there are the dumplings — traditionally these were made in homes in northern China, but now they've spread around the world. They are shaped like crescents or spheres, pan-fried (kuo tieh) or boiled (jiaozi). They resemble ancient Chinese money, are stuffed with humble ingredients like pork and cabbage, and are said to bring fortune to the household.

The whole family gathers to chat and make the dumplings, which are eaten between midnight and 2 a.m., says Grace Young, author of Stir-Frying to the Sky's Edge, a book of Chinese recipes and stories, and the Chinese food lore book The Breath of a Wok.

"There's also a custom to place a candied chestnut in a dumpling served to newlyweds," she says. "If the newlyweds get the dumpling, it means they will be blessed with a male child."

" 'As the jiao-zi boiled it was important not to remove the lid too soon,' says Lijun. 'If you did, it could mean that you'd lose your fortune in the coming year. Sometimes we would put a coin inside one dumpling for luck. On New Year's morning, it was customary not to cook but we were always happy to eat leftover warmed jiao-zi,' recalls Lijun fondly."

And historically, says Anderson, it just made sense to make dumplings when you wanted a little celebration but didn't have a lot of money or food. "In northern China, food was pretty scarce, especially this late in the winter. You're down to what little meat and flour you've got left. You stretch the meat as far as possible," Anderson says.

So why the Chinese new year obsession with wealth, long life and fertility?

"Remember, you're dealing with a place where until very, very recently, starvation was the main cause of death. Getting wealth, fertility and long life was what they wanted," Anderson says.

But really, don't we all want that?